A city awash in cards

Inside New York's underground poker scene, where no one thinks about the recession, or their rent money, when there's a good hand to be played. 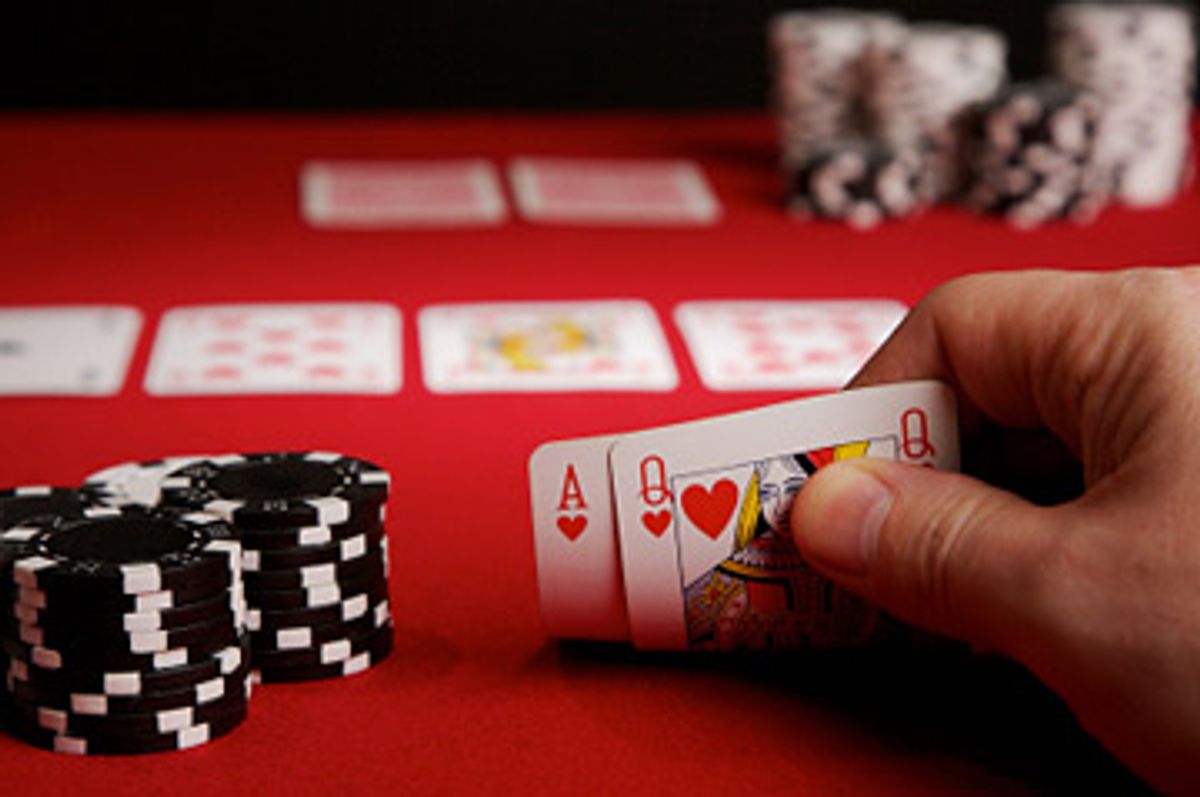 Hi, my name is Jim, and I have a gambling problem.

I told myself the last time was the last time, but here I am, in another bind: $1,000 in chips resting anxiously on the felt in front of me, and the ace-queen of hearts in my hand.

My lone opponent is Al, an egg-shaped old wiseguy who breathes heavy when he has a winner. Right now he's taking up most of the oxygen in this three-story walk-up.

The rational part of my brain is screaming at me. "Fold, you stupid motherfucker. That's half a month's rent you are about to toss into the pot on a draw." But Al is legendary for losing and that's all the compulsive part of my brain can focus on. "Maybe he's bluffing," it whispers. "Move all-in."

I glance around the table at the other eight players, guys with names like Fashion Larry and Liquor Bill. They are lawyers and students and businessmen, Muslims and Jews and whites, guys of all professions and ethnicities -- but almost always guys. They all have different reasons for playing on the underground poker scene: Some are addicts; at least two are sports-betting junkies who claim they once ran Gamblers Anonymous meetings. Some are lonely. Some are trying to escape their lives, wives or both. Some simply make more money playing cards than they would schlepping to an office every day. And then there are a few who just like the camaraderie.

By now, they've all folded their hands and moved on to mentally molesting the 22-year-old waitress with the J-Lo butt or murmuring into their cellphones: "I'm in a meeting, honey. I'll see you when I get home."

The financial shit storm rages outside, threatening to bring down a different branch of the country's economy each day, yet nobody here seems too concerned about plummeting portfolios or tattered 401Ks . The recession has most likely sent some guys to the poker hospital -- a forced hiatus from the scene due to lack of cash -- but the tables are still full most nights at New York City poker clubs.

Right now, the only thing I care about is whether I'm going to have chips left at the end of the hand.

I'm not sure I will. And that's the root of my problem.

None of this would have happened if, five years ago, my colleague hadn't told me about a small underground poker club in Manhattan's Flatiron district. At the time, the underground clubs had been making headlines in the tabloids when celebrities like Alex Rodriguez and Hank Azaria showed up, and cops shuttered the places as quickly as they made the papers. In New York City it's illegal to operate and work at a poker club; it's not illegal to play in them. Normally the clubs are wary of newcomers, but the Flatiron club had just opened and was desperate for players.

They let me in, and I never stopped going back.

To be honest, I was probably as desperate as they were. About four months earlier my wife had left me. I wasn't playing poker yet, so that wasn't an issue between us, although everything else seemed to be. We had spent a tumultuous year destroying each other, and I was left in an emotional morass. Anger, loneliness, betrayal and self-loathing -- one would hold me down while the others beat me up.

A support group the clubs are not, but they permit as much anonymity or companionship as you desire. I dabbled in both, became hooked on nights that turned into mornings, and savored the impunity of a man who had only a cat and an empty bed to answer to. Between the smooth, taut felt of the oblong table and the clattering chips riffling through fingers, there was enough stimulation to keep my mind perpetually moist with serotonin.

I quickly discovered a city awash in cards. Five clubs flourished in a 12-block radius alone, from 26th Street to 38th Street, between Broadway and Fifth Avenue. Another 15 or so dotted the rest of Manhattan and the outer boroughs -- commercial spaces, guarded by electronic locks, cameras and occasional security personnel, accommodating anywhere from three to 10 tables each. Buy-ins ranged from $80 to $5,000.

(The NYPD shut down the last of the big clubs this past fall, pushing the games into smaller, more residential settings with usually only one or two tables.)

I had never played poker beyond the confines of a kitchen table, however, and I learned the hard way that this wasn't your best friend's Friday-night nickel-and-dime game. I lost frequently. Hundreds. Then thousands. My salary at the New York Daily News -- I'm the deputy sports editor there -- was sufficient to sop up the losses without making a mess of my life. Not everyone who plays is as fortunate.

I found that in poker, as in life, people preyed on the weak. Nobody ever cheated against me -- that I'm aware of, at least -- but they took advantage of my ignorance. Interspersed with my losses, though, were modest wins fueled by luck and the advice of sympathetic club owners, dealers and fellow players. If you're not an unassailable asshole, most people will not take solace in your extended suffering.

Make no mistake: People come to these clubs to take every guy's last cent. They're certainly not there for the clubs themselves -- drab, cramped dwellings, hidden in places as far-reaching as a basement apartment and an after-hours office in the Empire State Building. Yet, in between hands, when there is little to do other than catch a score on a big-screen TV or feed your face with baked ziti, pizza or cheeseburgers, a newcomer can benefit from the goodwill of those otherwise hellbent on delivering him to destitution.

"Why didn't you raise in that spot instead of call?"

"You can't call there. What do you think he was betting with, nothing?"

"You are a fucking donkey!"

"If you don't like money, keep playing that way."

You either get better or you go broke. Little by little, through constructive criticism and unbridled bashing, I started to win. I tell myself -- and my live-in girlfriend, Mary, who tolerates my dalliances with a perpetual nervousness -- that skill is responsible for the modest success I've had, even though there are times when luck is a lady willing to go down only on the winningest guy in the room. Players call it the deck sitting on your face: No matter what rag-ass hand you play, it hits big. With that said, superior patience and well-timed aggression will -- and do -- outlast a sat-upon face.

Mary isn't convinced. If I were to call and tell her I was thinking about pushing $1,000 into the pot, she'd probably throw up into the phone. She knows the stakes I play for but can't relate to the risk-reward model involved. I would argue that I stand to win $2,000. She would counter that I'd be throwing away a grand, and around we would go until she'd say, "Fine, it's not my money. But don't expect me to support you after you gamble all of yours away."

I haven't done that yet. I've won considerably more than I've lost.

Which brings me back to Al and his heavy breathing.

Most hands in poker are not worth writing about. Nights on the underground are littered with them -- uneventful spasms of little monetary consequence. It's the unexpected and explosive collisions, such as the one unfolding between me and Al, that keep people coming back.

Al made a bet of $150. I raised him to $400. He immediately moved all-in for a total of $1,000, confirming what his heaving chest had long ago let slip -- he has a strong hand. He's probably sitting on a pair of kings, maybe three of a kind.

Despite his reputation, Al is not nearly the worst player I have seen. He just seems to find ways to lose and ways to lose find him. He's not exempt from having the deck fall spread-eagle on his face, however. So far tonight, Lady Luck's been stretching her legs in his direction.

If I push in the rest of my $600, with two cards to come, I will most likely need to catch one of the remaining nine hearts in the deck for a flush to win the hand. If I fold, I keep my remaining $600 and try my luck on the next hand.

"Buuh-ddy, I got you beat," Al says in his wiseguy accent as he chokes back a belly laugh. He gently adjusts the thick, black-rimmed glasses on the bridge of his nose and waves his hand dismissively. "He's got nuuht-ting. Fugehdaboutit!"

The other players, once uninterested bystanders, begin to stir toward the edge of their seats. Some stand to get a better perspective on the upcoming catastrophe.

In truth, it's a lot. If I were shopping for a TV or a couch, I would wince at that figure. It's different in poker, though. Once you decide to sit at the table, you have to forget about what the money in front of you represents in the real world. If you're thinking about your kid's college fund or a credit card bill when the guy next to you says, "I'm all-in," you have almost no chance of winning. If you can't afford to lose your stack on any given hand, then you shouldn't be playing.

No matter how much I've lost -- my biggest defeat was a $3,500 misstep against rap mogul Irv Gotti in a game that was probably a little too big for my britches -- I've never walked away from the table fretting about the amount I've just dropped. Don't get me wrong; it sucks to lose large sums of cash. But I don't have children or a mortgage, and I leave the rent money at home.

The only thing I have to answer to is that relentless voice in my head.

And so I do: "I call" tumbles from my mouth as I nudge my chips forward.

Al flips over a pair of aces. I show him my ace-queen of hearts.

There are gasps. "Are you kidding me?" someone says. "Jesus," says someone else. I've made a bad call, and everyone knows it. A taste surfaces in my mouth that I can't quite identify. My best guess is fear.

The dealer taps his right hand on the felt and with a snap peels the next card from the deck: Three of clubs.

Another snap: Five of spades.

The room collapses in euphoria and despair. Nauseousness battles adrenaline in my gut as the dealer pushes my chips to their new home.

Al shoots me an apologetic, yet relieved, look. "Buuh-ddy. I can't believe you call that bet," he says. "That's not like you buuh-ddy."

He might be right, but everyone in the room has been in my seat before. There is no need for words. I am numb as I rise to put on my jacket. I glance back at my chair in search of nothing in particular.

"Tough one, Jimbo," the floor manager says as he escorts me to the exit. I attempt a smile. "You'll get him tomorrow night," he adds with a detachment meant to signal that he's waiting for me to leave.

He closes the door behind me with polite urgency.

The deadbolt detonates in the hollow stairwell, banishing me to the reality of the street below.

I hail a taxi and try to think about my job or the show Mary and I are seeing this weekend. It doesn’t work. The cabbie clicks on his meter and could've, should've, would've taunt me the entire ride home.

Jim Rich is Deputy Sports Editor at the New York Daily News. He lives in Manhattan with his girlfriend Mary.