The Minnesota congresswoman introduces legislation to protect the greenback from the new world order meddling of Tim Geithner, the Benedict Arnold of treasury secretaries. 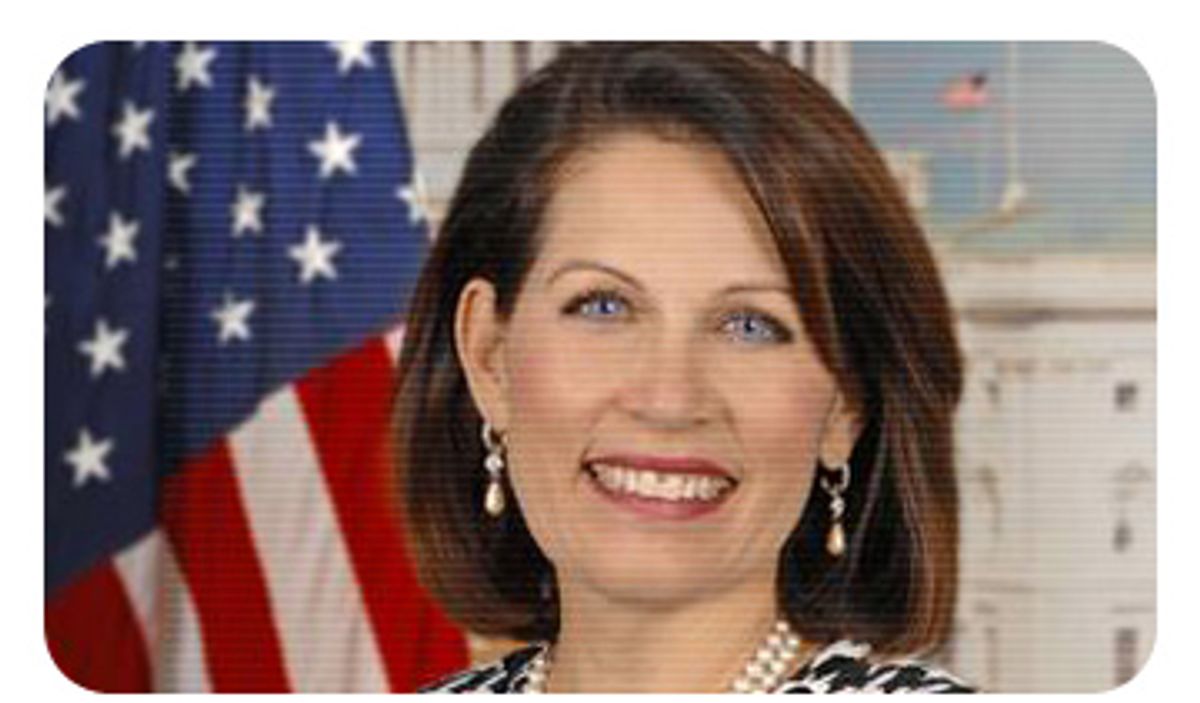 You can say a lot, and we most certainly have, about the utterances that emerge from Minnesota Republican Michele Bachmann's mouth, but you can't say that she doesn't stick to her guns. On Tuesday, the congresswoman asked Treasury Secretary Timothy Geithner whether he would "categorically renounce the United States moving away from the dollar and going to a global currency as suggested this morning by China."

What happened in the meantime? Geithner appeared before the Council on Foreign Relations on Wednesday morning and confused his audience, not to mention currency traders watching the live stream of the event all over the world, by appearing to indicate that he was open to an idea proposed by China's Central Banker Zhou Xiaochuan calling for the creation of a new "super-sovereign" international reserve currency.

Or, as Bachmann's press release phrased it:

Asked today about a currency proposal from China at a Council on Foreign Relations event, Secretary Geithner stated he was open to supporting it. Despite attempts to clarify his remarks later in the day, the unguarded initial response calls into question his true intentions.

His true intentions! It's not enough that the right thinks Geithner's a power-mad statist who wants to destroy the free market for all time, while the left thinks he's a minion of Goldman Sachs determined to hand billions of taxpayer dollars to his plutocrat buddies! No, the truth is far, far worse. He's a Chinese mole, a real-life Manchurian treasury secretary, programmed to take over the Treasury Department of the United States and destroy the value of the U.S. dollar. He is the Benedict Arnold of treasury secretaries!

Yet even as I jest, I have to acknowledge that currency traders dumped the dollar within seconds of Geithner's initial comments, and they only stopped panicking after the moderator of the CFR event, former Deputy Treasury Secretary Roger Altman, gave Geithner an opportunity to reiterate the platitude that the dollar would remain the world's "dominant currency." It seems ludicrous that the world's currency traders could be so naive, but hey, all it takes is a trickle of stupidity to start an avalanche of sell orders.

So what did Geithner really say? I watched the CFR event in real time, and the first thing that struck me was how much more relaxed and comfortable Geithner appeared in front of an audience of his peers -- bankers, regulators, financial journalists -- than he does when facing Senate and House committees, giving speeches, or appearing on CNN. It's a lot easier not dumbing yourself down for an audience that understands what you are talking about than sparring with the likes of Maxine Waters, Ron Paul, Michele Bachmann or Jim Bunning. Geithner spoke fluidly and confidently about a range of issues. But it's possible that that very sense of comfort set him up for a fatal trap.

Here's what Geithner said after being asked to comment "on the Chinese government proposal about a global currency."

I haven't read the governor's proposal. He's a -- a remarkable -- a very thoughtful, very careful distinguished central banker. Generally find him sensible on every issue.

But as I understand this proposal, it's a proposal designed to increase the use of the IMF's special drawing rights [SDRs]. And we're actually quite open to that suggestion.

ALTMAN: A number -- I haven't read the -- the governor's essay either. But a slew of news reports interpreted his comments to suggest that the world needs a super reserve currency and that the dollar on some gradual basis ought to be replaced in favor of that. And I wasn't entirely clear on what your response was.

GEITHNER:  Well, as I said, I haven't read his proposal, but I thought the initial reaction was sort of ahead of the details of the proposal I saw. The only thing concrete I saw was a reference to extending the use of the SDR.

I do think Geithner stumbled a bit here. While it is true that the substantive policy recommendations in Zhao Xiaochuan's proposal had to do with strengthening the IMF's Special Drawing Rights -- which are best thought of as an accounting technique used to manage the books between the IMF and sovereign nations -- it's foolish to deny that those proposals came in the context of a clear call to replace the U.S. dollar as the de facto international reserve currency. Geithner should have been more sensitive to that, although I am willing to give him the benefit of the doubt. Considering how much he has on his plate and how much time he has spent this week testifying before Congress, he probably didn't have time to review the Chinese proposal. He is simultaneously trying to fix the banking system, overhaul regulation of the financial sector, save the auto industry and help get the U.S. economy out of a recession. I forgive him for not being up to date on Chinese schemes for international monetary union.

The point is, it is not necessarily a stupid or bad thing to bolster the IMF SDRs. One way to think about SDRs is as credits that nations with trade surpluses can use to balance their accounts with nations that have trade deficits. The IMF is the clearinghouse, and the result is increased liquidity. In a world with vast global imbalances, largely due to the fact that the U.S.  runs huge deficits but the U.S. dollar is the de facto international reserve currency, greater use of SDRs could help even things out, and perhaps even alleviate pressure on the dollar.

Dani Rodrik, the Harvard economist, argued in February that the "easiest and quickest way to create global liquidity and enable credit-starved emerging and developing countries to increase their spending is for the IMF to engineer a vast new SDR allocation. It can be done at the stroke of a pen, and it does not require the IMF to negotiate a program for every country that needs a loan."

Let's remember some basic facts. The U.S. fiscal stimulus will be a lot less effective if it is not accompanied by similar fiscal action elsewhere. Developing nations are severely limited in what they can do in this respect because they have little room for domestic borrowing. Serious fiscal stimulus requires that they have resort to external resources, of which there is a severe shortage at the moment (both because of the flight to quality and the borrowing that is going on in the developed world). The existing swap lines and the IMF's new short-term lending facility have had few takers, in part because no country wants to signal that they are (or may be) in trouble and running out of resources. A generalized SDR allocation -- in return for a commitment to spend a share of these resources in pursuit of a globally coordinated fiscal stimulus -- would give countries the cover needed to do what is good for them and for the rest of the world without suffering a reputational penalty.

The main objection to the creation of SDRs has always been that this would be inflationary. In the current environment, this is a plus rather than a minus. Inflationary, you say? Pile it on! That is exactly what the doctor ordered.

On March 11, in preparation for a meeting with the finance ministers of the G20, the Treasury Department released a proposal that included a call for a one-time increase in SDR allocations for IMF members as part of a plan to improve global financial stability. In retrospect, I think it's pretty clear that Geithner was thinking in terms of what he had already proposed when he said the Treasury was "open" to Zhao's suggestion to increase the use of special drawing rights. And he probably imagined that he was talking to an audience that was attuned to such subtleties.

But, of course, as the treasury secretary of the United States he was talking to the entire world, which includes ample quantities of trigger-happy currency traders and right-wing isolationists who see any hint at global monetary union as an impermissible sacrifice of U.S. sovereignty to America-haters who will use their new powers to seize our children and force them to pray before graven images of Karl Marx every morning.