Zac Efron and the twilight of the teen idol

The "High School Musical" pinup wants to shed his cheesy image. Can he succeed? Plus: A look at the heartthrobs who made the leap to adult fame. 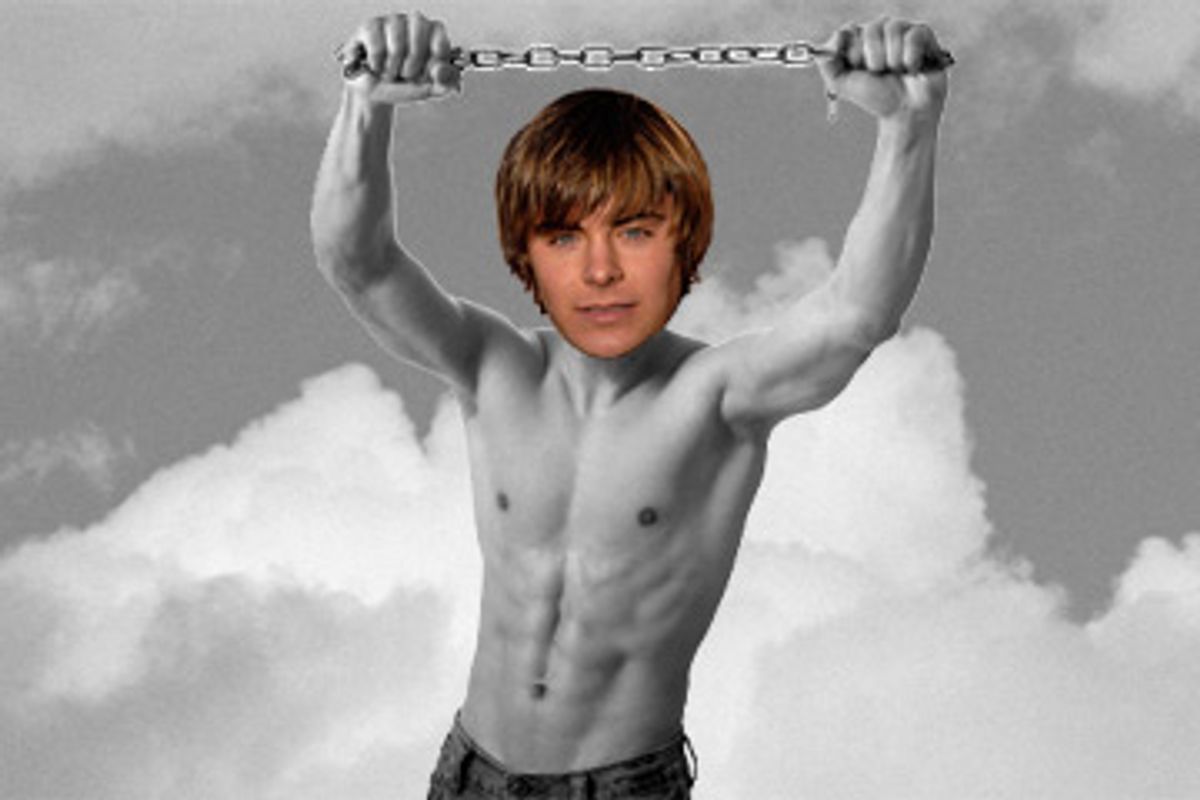 There is a time in every young teen idol's life when he must ditch the tan bronzer and try to make a go of some adult career. This is always fascinating to watch, because it signals the chance, however slight, for a real person to claw his or her way through the plastic, to veer off-script in an industry that has, up until this moment, micromanaged every last Ryan Seacrest interview. This is the moment that separates the Justin Timberlakes from the Joey Fatones. Many dewy youths have fallen in their attempts at this career juncture, and they have the drinking habits and the VH1 reality shows to prove it.

And so we have arrived at Zac Efron's moment. In this month's Interview magazine, the well-scrubbed 21-year-old star of "High School Musical" loosens the shackles of his pukka-shell necklace and undergoes a dirty-sexy makeover -- black-and-white photos feature him rolling in the mud with a naked model (Lithuanian Edita Vilkeviciute), her pert nipples visible, and looking like he is 15 years late to Chris Isaak's "Wicked Game" video shoot. The whole package is a self-conscious attempt to rescue Efron from the sea of Disney banality in which he has been dog-paddling for some time: The artsy cover ominously declares, "Zac Efron Is the Future." The interview is conducted by beloved indie director Gus Van Sant -- a man whose stamp of approval is so coveted by young Hollywood that it became a plotline in HBO's "Entourage" -- and the pair gab about vintage furniture and Efron's upcoming period film with Richard Linklater, "Me and Orson Welles." The repeated message here is that you won't have Zac Efron to sing your four-part harmonies anymore. On Tuesday came the announcement that Efron had pulled out of his starring role in the remake of "Footloose," a part that seemed to seal his fate as a song-and-dance plaything for tween America and the next logical step in his retread of vapid '80s teen idoldom. Ditching that part is possibly the most interesting thing Efron has done in his career -- which is, admittedly, a short list, including the time he told Elle magazine that his mom bought him an economy box of condoms.

Even in the pantheon of bland teen stars, Efron always seemed particularly animatronic. (That's not even his real voice in the original "High School Musical," though he insisted on singing in the sequels.) With his '50s-era Boy Scout good looks, annoyingly windswept bangs, and the made-for-the-tabloids romance with Vanessa Hudgens, Efron has never been much more than a punching bag for those of us over 10 years old. When Rolling Stone declared him the "New American Heartthrob" in 2007, it seemed to be saying more about its own desperate bid for relevance than anything else. "As long as I stay boring, I think I'll be fine," Efron said in the cover story. And there did not seem to be any danger of him doing otherwise. Which is another reason why this moment is exciting: He could have sucked on the bong of "HSM" for years, living a cozy existence fortified by Teen Choice awards, in which the most serious question he faced was whether or not he liked to wear makeup.

I don't mean to suggest that by splattering mud on his face and pressing his pecs against a naked lady, Efron will suddenly morph into Johnny Depp. Depp displayed hints of his talent even in his earliest roles, whereas Efron's chops have yet to manifest. In fact, it's a bit squirm-inducing to hear about Efron's artistic aspirations, however fledgling and undefined they are. "I'm getting a list of great films on my iPhone," he told Gus Van Sant, "and every time somebody mentions one, I try to go out and watch it." (He just saw "Ordinary People." Verdict? "I was amazed.") His next film is "17 Again," a hokey-sounding age-inversion film in which he plays a 37-year-old stuck in the body of a teenager, which is not likely to land him on anyone's Oscar shortlist.

Nevertheless, there's something invigorating about a teen idol attempting to wriggle free of his constraints. It's a gamble for a star whose fame relies on the conflicted desires of the young girls (and boys) who adore him, in part, for his androgyny, because he is unthreatening, sweet and cuddly as a puppy. No matter how sexualized our culture becomes, the overwhelming success of "High School Musical" -- in fact, of every teen idol -- confirms that kids crave the soft-focus fantasy of romance and sexuality while keeping all the dirty, nasty stuff at arm's length. (Hello, Jonas Brothers.) Trying to transition into a more grown-up role is the sword on which so many beloved teen idols have fallen. But whether he can pull a Depp or a Timberlake, or whether he winds up as the next David Cassidy, forever plagued by the credibility that eluded him, Efron's career now has a quality it has lacked for so long: It has become unpredictable.

Teen idols who have crossed over

The career span of a dreamy pinup is often painfully short, but a handful have cheated fate and turned themselves from punch line to marquee player.  Here are a few hits (and near-misses):

Almost as soon as Depp pierced public consciousness as the young star of late '80s teen-cop drama "21 Jump Street," he made it clear he wasn't a going to be a garden-variety idol. He started talking in interviews about making a movie of Kerouac's "On the Road" and threatening to shave off his hair. By 1990 he was fleeing his prime-time trap for a starring role in John Waters' "Crybaby," which he described at the time as "the ultimate juvenile-delinquent musical comedy" -- soon to be followed by Tim Burton's "Edward Scissorhands," the first of many quirky movies he would choose on his way to becoming one of the world's most admired actors.

From his early appearance on "Star Search" to his squeaky-clean image in 'N Sync, there was little to suggest towheaded Timberlake was anything more than harmless fantasy fodder. He and Britney were the reigning fairy tale couple -- but in 2003, they broke up and in one fell swoop, both young lovers tumbled into adulthood. Timberlake took up with the very grown-up Cameron Diaz, and his debut album catapulted him to superstardom. He became a regular Rolling Stone cover boy, made even more infamous for exposing Janet Jackson's nipple during the Super Bowl.  But he found respect and widespread critical acclaim with his adventurous album "FutureSex/LoveSound." Timberlake had pulled off the ultimate former teen-pinup feat: building up artistic credibility while keeping the fans panting.

The beleagured pop star has zigzagged across the line of credibility so many times that it's hard to remember when she first arrived. La Spears was incubated in "The New Mickey Mouse Club," of course, and burst on to the pop scene with an album that had one bona fide megahit ("Baby One More Time") and a lot of cloying nonsense. She had all the trappings of a one-hit wonder, but Spears leveraged her time in the spotlight with a series of then-shocking magazine spreads, beginning with David LaChapelle's Rolling Stone cover in 1999, flaunting her sizzling teen bod while promising to keep her virginity tucked away in a heart-shaped box. It was all a bunch of calculated nonsense, of course, but it worked, along with all those perfect Max Martin pop confections, so that by the time she swapped saliva with Madonna on the MTV Video Music Awards in 2003, the homespun Louisiana teenybopper had transformed herself into the country's reigning pop princess. And then, other things happened. Maybe you heard.

Booted out of the '80s teen group New Edition for bad behavior, Bobby Brown could have easily been a footnote to the '80s boy band era -- and a minor one at that. His first solo attempt was largely ignored, but his 1988 smash album "Don't Be Cruel" was all swagger and sass, and the hit "My Prerogative" became an anthem for teen-idol rebellion when Britney Spears remade it in 2004. Brown became a blueprint for Spears in another way, as his music career soon became eclipsed by the hot mess of his tumultuous reality-show life.

A life of crime or life in a boy band seemed to be the two options facing Mark Wahlberg at the age of 13. He switched off between the two, spending a short stint in his brother Donnie's band New Kids on the Block and another in jail before finding fame as Marky Mark and the Funky Bunch. The party jam "Good Vibrations" was a massive hit, as was the video in which Wahlberg flexed his bare, extremely buff chest. His career as a Calvin Klein underwear model eventually overshadowed his music, and a dead-end future as a hunky has-been was looming. But in 1993, Wahlberg got a part in a movie, which led to a string of strong performances in movies like "The Basketball Diaries" and "Boogie Nights." Nowadays, Wahlberg not only acts (nabbing an Oscar nomination for "The Departed" in 2006) but he's also a Hollywood exec, producing the HBO series "Entourage" (loosely based on his own experiences) and "In Treatment" -- about as impressive an outcome as a pretty boy teen idol could imagine.

Last April, tween superstar Miley Cyrus, aka Hannah Montana, tried her hand at a different kind of girl power: posing for a racy Annie Leibovitz portrait (just as David Cassidy had once done), draped in nothing but a bedsheet for the cover of Vanity Fair. What was presumably meant to signal a break from the goofy girldom of her Disney career prompted a ferocious backlash among parents and Disney itself, panicked that it might be losing its prized pony. A contagion of apologies and hand-wringing trend pieces later, the moment still stands as a transition for Cyrus, who managed to catapult herself into the national conversation, though she's back in line now for the most part, starring in April in another soft-focus "Hannah Montana" film. More moments of teen rebellion inevitably await.

OK, so David Cassidy never exactly crossed over to mainstream credibility. But it's not like he didn't try. Before he was cast as Keith Partridge in 1970, Cassidy had dreams of being a serious actor and musician -- but his massive TV superstardom derailed his plans and left him with a trail of screaming girls and a zillion lunchboxes bearing his image. ''I was playing a part on television, and that became the David Cassidy story. But underneath, there was this guy who was dying to do 'Purple Haze,''' he once told Entertainment Weekly. He desperately tried to shred his image by posing for a nude Annie Leibovitz Rolling Stone cover, his pubic hair on show, and dissing "The Partridge Family," but to no avail. Cassidy didn't find a place for himself until 1983, when he took the lead role on Broadway in "Joseph and the Amazing Technicolor Dreamcoat," a musical that has become a refuge for many former teen idols (Donny Osmond, Andy Gibb, Michael Damian and Leif Garrett among them) seeking salvation.