Watching the detectives: Some new sleuths make waves, from "The No. 1 Ladies' Detective Agency" to "The Unusuals." Plus: With "Life on Mars" canceled, will Sam get back to where he once belonged? 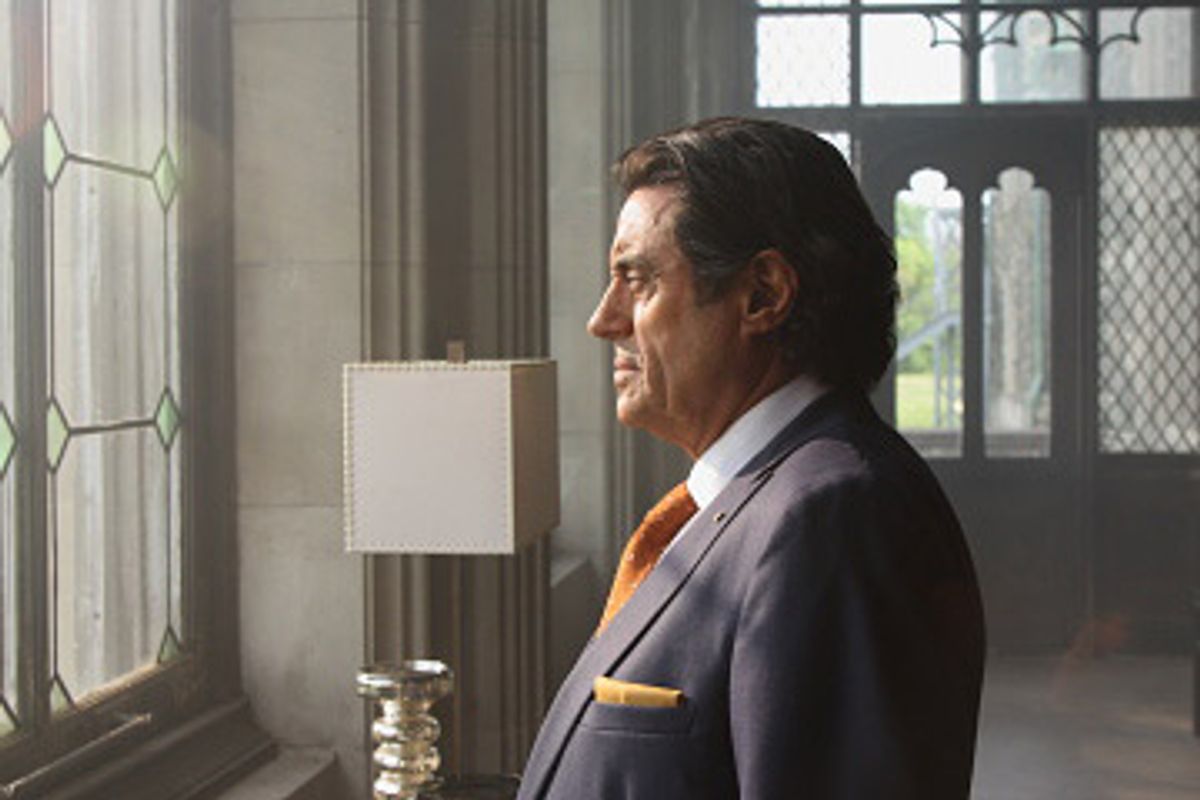 Over the past few decades, if you wanted to create a TV character who's striving to make the world a better place, you made that character a cop. Cops on TV have always been stand-ins for anyone who's striving to right some wrong or wrestle with the enormous injustices of the universe.

Because, unfortunately, shows about tireless employees of nonprofit organizations just don't have the same flair as murder mysteries. We don't necessarily care whether Joe finishes his grant proposal or files his expenses under the appropriate federal code. Likewise, schoolteachers, city councilmen, volunteers, drug counselors, public policy reform advocates, social workers and grass-roots organizers fail to capture our imaginations the way a gritty detective with a bad attitude and a drinking problem does.

But even cops get boring after several decades of prime real estate on the small screen. That's why we need shows about time-traveling cops ("Life on Mars"), clairvoyant cops ("The Mentalist," "Medium"), teenage detectives ("Veronica Mars"), obsessive-compulsive detectives ("Monk"), evil cops ("The Shield"), cops who work the system ("The Wire") and many, many more.

We've seen every kind of cop or detective under the sun -- or at least, I thought we had, until I met the brand-new, improved breed of detectives recently invented for our viewing pleasure in the highly paid TV laboratories of the world.

HBO's "No. 1 Ladies' Detective Agency" (premieres 8 p.m. Sunday, March 29) may be the furthest thing from a traditional procedural drama that most of us have ever seen. The six-episode series, which originally aired on the BBC in 2008, is based on the bestselling novel series by Alexander McCall Smith. The drama follows the adventures of Mma. Precious Ramotswe (Jill Scott), an independent young woman who moves to Gabarone, Botswana, in the wake of her father's death and starts a private detective agency. But as Ramotswe finds a cute little office, sets up shop, and hires a prim, efficient (and occasionally tactless) right-hand lady and secretary, Mma. Makutsi (Anika Noni Rose), it's hard not to wonder exactly what kind of low-stakes mysteries she's going to tackle, without any real experience in her field.

In part because the first two-hour segment of the show feels less like a pilot than a made-for-TV movie, "The No. 1 Ladies Detective Agency" can be tough to appreciate at first. Sure, Jill Scott is immediately lovable as our big-boned (see also "Traditionally Built") heroine, Ramotswe, but the unexpectedly patient pace and light, absurd tone don't dovetail with what we expect from a detective drama (OK, fine, maybe rabid "Monk" fans won't be quite as thrown off by these things). As charismatic and unfamiliar as Ramotswe is, after the first hour, it's hard to imagine becoming addicted to this series the way so many readers are addicted to McCall Smith's novels.

But then, by the beginning of the second episode, we start to understand: This series is a dramedy, really, a more exotic, more absurd, more original version of "Grey's Anatomy," if you will. Plus, Ramotswe offers something that most dramedies don't: a wise, complex heroine whose indignant, outspoken approach to the selfish miscreants of the world somehow comes off as inspiring rather than self-righteous. There's a determined look she gets when she encounters someone who's heartlessly screwing over the weak. Even when confronting dangerous criminals, she can't contain her rage. "Let her run! Let the hyenas eat her!" she calls after one criminal. This is a woman who'll do whatever it takes to bring a perpetrator down, first through hurled insults, then through public humiliation, and finally, through extended incarceration.

Ramotswe isn't perfect, of course. She's preoccupied with her handsome but nefarious ex-husband and the infant she lost after he abused her. She's frightened by the thugs in her midst and scared to become romantically involved again, even with her most devoted admirer, mechanic JLB Matekoni (Lucian Msamati) who, in a testament to the fine script, captures our affections in his very first humble but charming appearance on-screen.

But above all else, when it comes to standing up for the powerless, Ramotswe is endlessly courageous. Whether you're enraged by the injustices of the world or just annoyed with a particularly insensitive customer service representative, "The No. 1 Ladies' Detective Agency" provides a nice antidote: A sweet little tale about sweet, sweet revenge in an exotic land thousands of miles away.

Compared to a quirky detective show with a female lead set in Botswana, "The Unusuals" (premieres 10 p.m. on Wednesday, April 8) might look like just another cop show starring that girl from "Joan of Arcadia." Look a little closer, though, and what you'll find is a truly strange cop dramedy with lots of sharp dialogue, jocular banter and offbeat scenarios.

Walsh: There's gonna be a funeral in a few days. You're not going.

Sleazy Girlfriend: But we were in love.

Walsh: Uh, no you weren't. He had a churchgoing wife with real breasts who doesn't need to know about his husband's extras.

Sleazy Girlfriend: Don't look at me like that. I go to church, I got a mother, I'm not some home-wrecker.

Shraeger: Vera, right? Looking around your apartment you probably don't own a pair of heels lower than three inches, you answer the door for the pizza guy in a pair of panties. I don't want to ruin your day, but in my book, you are definitely the mistress, and you're not going to the man's funeral.

Walsh and Shraeger appear likely to share a semi-flirtatious cop-effectiveness one-upmanship game moving forward, which immediately lumps them in with Tim Roth and Kelli Williams of "Lie to Me," Nathan Fillion and Stana Katic of "Castle," and Emily Deschanel and David Boreanaz of "Bones," demonstrating once and for all that "Moonlighting"-inspired investigative teams have reached critical mass.

That said, "The Unusuals" keeps our attention with its clever banter, moves along at a nice clip, and has plenty of flair to spare. Although most of the story lines are serious, like "The No. 1 Ladies' Detective Agency," "The Unusuals" puts its comic sensibility front and center in almost every scene. The show is like a deranged blend of "Life on Mars" and "Veronica Mars," with a little "Barney Miller" thrown in for good measure. The scene where a guy dressed like Ronald McDonald yells from his jail cell, "Don't I get a phone call?" to which a cop responds, "Who you gonna call, the Hamburglar?" feels like a page straight from the Hal Linden playbook. In another scene, we hear an operator on the police radio saying, "Be advised that dispatch is cranky today and will be accepting no guff or lip from anyone."

Likewise, most of the cops in homicide are certifiable nut jobs. Eric Delahoy (Adam Goldberg) is trying to kill himself while his partner Leo Banks (Harold Perrineau) won't take off his bulletproof vest. Detective Ed Alvarez (Kai Lennox) talks about himself in the third person and shamelessly self-promotes to climb higher in the ranks. And then there's Sgt. Brown (Terry Kinney), who accepts no guff or lip from anyone:

Sarge: Some city councilman's daughter was attacked. First thing tomorrow morning I need you to go there, take a statement.

Leo: With all due respect, Sarge, we'd rather work Kowalski.

Sarge: And I'd rather my son didn't wear his mother's underpants. Be there.

Despite its strengths, "The Unusuals" occasionally devolves into predictable zaniness, from Delahoy and Banks pursuing a catnapper on foot through New York city streets over a madcap chase soundtrack to the detective who leads the group in a not-so-solemn prayer for their fallen comrade, Kowalski. Ultimately, though, "The Unusuals" will depend on a pretty high level of comedy and story lines to succeed. What with the glut of detective shows already crowding the small screen, if it doesn't outperform each and every episode, viewers may deem it not that unusual after all.

Nielsen men are from Mars

Such has been the fate of ABC's "Life on Mars," which, despite gathering momentum to become one of the better shows to air this season, won't be invited back for a second run in the fall. Ratings have been dismal, hovering around the range shared by the CW's lesser offerings. I suppose we can console ourselves with the fact that at least now "Life on Mars" will have a finale (airs at 10 p.m. on Wednesday, April 1), which means that we may have the satisfaction of seeing Sam (Jason O'Mara) find his way back to 2008 and his one true love, Maya (Lisa Bonet).

That said, seeing a show this good go down the tubes so quickly is pretty depressing -- and pretty incredible. Take a hit show on the BBC, seamlessly and wittily adapt it for an American audience, throw in an all-star cast that includes Michael Imperioli, Harvey Keitel and Gretchen Mol, and then toss in smart writing, cool sets and great old music, and what do you end up with? A bomb. Meanwhile, "CSI: Miami" reigns supreme.

Like most of us, I try to cultivate an attitude of non- attachment when it comes to the fickle whims of American TV viewers, but every now and then I feel a little pessimistic and defeated in spite of myself. Why does "Dancing With the Stars" attract huge audiences, while it's still up in the air whether NBC's "Friday Night Lights" will end after such a touching and down-to-earth third season? Why would a great episode of "30 Rock" pull in roughly the same ratings as another pointless episode of "Celebrity Apprentice"? Why should Fox's "Dollhouse" struggle for healthy ratings, when "American Idol" crushes the competition every week like a despotic king? Just ask Precious Ramotswe and she'll tell you: Some mysteries aren't meant to be solved, and some wrongs will never be made right.