The president sounds like he's channeling Cheney or McCain -- or a Cold War hawk afraid of international communism -- when he talks about the war in Afghanistan. 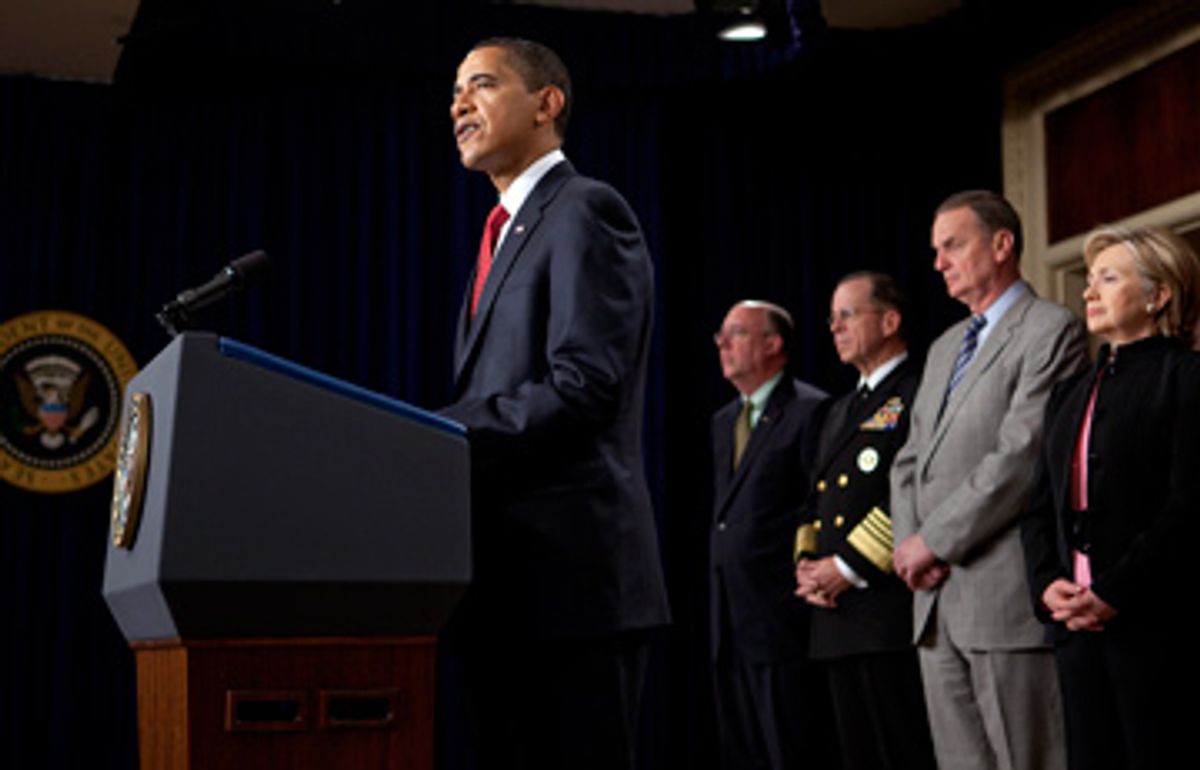 President Barack Obama may or may not be doing the right thing in Afghanistan, but the rationale he gave for it on Friday is almost certainly wrong. Obama has presented us with a 21st century version of the domino theory. The U.S. is not, contrary to what the president said, mainly fighting "al-Qaida" in Afghanistan. In blaming everything on al-Qaida, Obama broke with his pledge of straight talk to the public and fell back on Bush-style boogeymen and implausible conspiracy theories.

Obama realizes that after seven years, Afghanistan war fatigue has begun to set in with the American people. Some 51 percent of Americans now oppose the Afghanistan war, and 64 percent of Democrats do. The president is therefore escalating in the teeth of substantial domestic opposition, especially from his own party, as voters worry about spending billions more dollars abroad while the U.S. economy is in serious trouble.

He acknowledged that we deserve a "straightforward answer" as to why the U.S. and NATO are still fighting there. "So let me be clear," he said, "Al-Qaida and its allies -- the terrorists who planned and supported the 9/11 attacks -- are in Pakistan and Afghanistan." But his characterization of what is going on now in Afghanistan, almost eight years after 9/11, was simply not true, and was, indeed, positively misleading. "And if the Afghan government falls to the Taliban," he said, "or allows al-Qaida to go unchallenged -- that country will again be a base for terrorists who want to kill as many of our people as they possibly can."

Obama described the same sort of domino effect that Washington elites used to ascribe to international communism. In the updated, al-Qaida version, the Taliban might take Kunar Province, and then all of Afghanistan, and might again host al-Qaida, and might then threaten the shores of the United States. He even managed to add an analog to Cambodia to the scenario, saying, "The future of Afghanistan is inextricably linked to the future of its neighbor, Pakistan," and warned, "Make no mistake: Al-Qaida and its extremist allies are a cancer that risks killing Pakistan from within."

This latter-day domino theory of al-Qaida takeovers in South Asia is just as implausible as its earlier iteration in Southeast Asia (ask Thailand or the Philippines). Most of the allegations are not true or are vastly exaggerated. There are very few al-Qaida fighters based in Afghanistan proper. What is being called the "Taliban" is mostly not Taliban at all (in the sense of seminary graduates loyal to Mullah Omar). The groups being branded "Taliban" only have substantial influence in 8 to 10 percent of Afghanistan, and only 4 percent of Afghans say they support them. Some 58 percent of Afghans say that a return of the Taliban is the biggest threat to their country, but almost no one expects it to happen. Moreover, with regard to Pakistan, there is no danger of militants based in the remote Federally Administered Tribal Areas (FATA) taking over that country or "killing" it.

The Kabul government is not on the verge of falling to the Taliban. The Afghan government has 80,000 troops, who benefit from close U.S. air support, and the total number of Taliban fighters in the Pashtun provinces is estimated at 10,000 to 15,000. Kabul is in danger of losing control of some villages in the provinces to dissident Pashtun warlords styled "Taliban," though it is not clear why the new Afghan army could not expel them if they did so. A smaller, poorly equipped Northern Alliance army defeated 60,000 Taliban with U.S. air support in 2001. And there is no prospect of "al-Qaida" reestablishing bases in Afghanistan from which it could attack the United States. If al-Qaida did come back to Afghanistan, it could simply be bombed and would be attacked by the new Afghan army.

While the emergence of "Pakistani Taliban" in the Federally Administered Tribal Areas is a blow to Pakistan's security, they have just been defeated in one of the seven major tribal agencies, Bajaur, by a concerted and months-long campaign of the highly professional and well-equipped Pakistani army. United States Secretary of Defense Robert Gates replied last summer to the idea that al-Qaida is regrouping in Pakistan and forms a new and vital threat to the West: "Actually, I don't agree with that assessment, because when al-Qaida was in Afghanistan, they had the partnership of a government. They had ready access to international communications, ready access to travel, and so on. Their circumstances in the FATA (Federally Administered Tribal Areas) and on the Pakistani side of the border are much more primitive. And it's much more difficult for them to move around, much more difficult for them to communicate."

As for a threat to Pakistan, the FATA areas are smaller than Connecticut, with a total population of a little over 3 million, while Pakistan itself is bigger than Texas, with a population more than half that of the entire United States. A few thousand Pashtun tribesmen cannot take over Pakistan, nor can they "kill" it. The Pakistani public just forced a military dictator out of office and forced the reinstatement of the Supreme Court, which oversees secular law. Over three-quarters of Pakistanis said in a poll last summer that they had an unfavorable view of the Taliban, and a recent poll found that 90 percent of them worried about terrorism. To be sure, Pakistanis are on the whole highly opposed to the U.S. military presence in the region, and most outside the tribal areas object to U.S. Predator drone strikes on Pakistani territory. The danger is that the U.S. strikes may make the radicals seem victims of Western imperialism and so sympathetic to the Pakistani public.

Obama's dark vision of the overthrow of the Afghanistan government by al-Qaida-linked Taliban or the "killing" of Pakistan by small tribal groups differs little from the equally apocalyptic and implausible warnings issued by John McCain and Dick Cheney about an "al-Qaida" victory in Iraq. Ominously, the president's views are contradicted by those of his own secretary of defense. Pashtun tribes in northwestern Pakistan and southern Afghanistan have a long history of dissidence, feuding and rebellion, which is now being branded Talibanism and configured as a dire menace to the Western way of life. Obama has added yet another domino theory to the history of Washington's justifications for massive military interventions in Asia. When a policymaker gets the rationale for action wrong, he is at particular risk of falling into mission creep and stubborn commitment to a doomed and unnecessary enterprise.