Simon Johnson's crusade against the oligarchs of Wall Street

The left cheers as a former IMF chief economist preaches "structural adjustments" for the U.S. But didn't "the Washington Consensus" help get the world into its current mess? 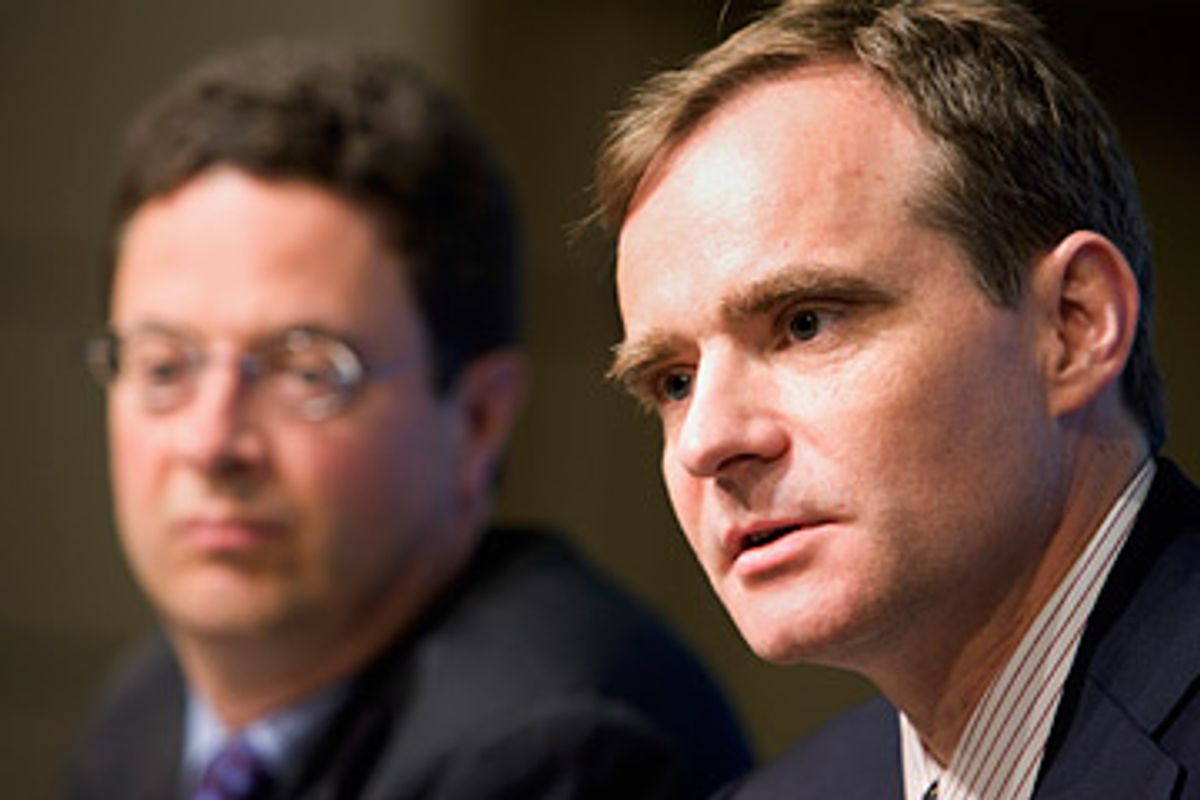 Few magazine articles in recent memory have excited as much econo-blogospheric commentary as former International Monetary Fund chief economist Simon Johnson's "The Quiet Coup." For good reason: Johnson's elucidation of how four decades of deregulatory ideology placed the interests of Wall Street "oligarchs" above the interests of the general public is magisterial and convincing.

One can argue with his conviction that the Obama administration represents nothing more than a seamless continuation of such policies. Even Johnson, whose views are now being showcased in a spectacular variety of media outlets, has conceded in recent weeks that, in comparison with Europe, the U.S. is taking much more aggressive action to confront the global economic mess. In a Wall Street Journal Op-Ed piece published Tuesday, Johnson also acknowledges that the White House's request for new authority to regulate bank holding companies and other financial institutions capable of threatening "systemic risk" would give the Treasury Department the tools necessary to do exactly what he has long been recommending: "walk into America's largest financial institutions, such as Citibank or Bank of America, and liquidate them."

Would Tim Geithner use such powers if he gets them? We don't know, but critics like Johnson and Paul Krugman serve a vital role in keeping the pressure on. There's no question: Breaking the back of the oligarchs who wrested control of the global economy's commanding heights and then wrecked it almost beyond repair is job No. 1, and aside from Krugman, no one has pushed the necessity for strong action harder or with more visibility than Johnson.

The central narrative gambit of "The Quiet Coup" is simple: The United States is unwilling to take the same harsh medicine it would prescribe to a developing nation that exhibited the same critical problem: domination of the political process by self-interested economic elites. But there is more than a little irony involved with the fact that this advice is coming from a former IMF chief economist. A great many people on the left who are applauding Johnson seem to have forgotten just how critical the IMF was in spreading exactly the kind of economic policies that helped secure Wall Street's absolute sway over global markets. Doesn't anyone remember "the Washington Consensus" -- the belief that deregulation, privatization and trade liberalization were the holy writ for all developing nations? The IMF was one of the primary proseletyzers and implementers of this vision. If your economy got into trouble, the IMF would help you out, but only after requiring "structural adjustments" that often caused significant hardship.

The result, particularly after the Asian financial crisis of the late '90s, was a massive rejection of IMF help by developing nations, particularly in East Asia and South America. If you're looking for reasons why so many countries in South America have turned sharply to the left, it is partially due to the pain caused by following IMF advice. If you want to know why China and other East Asian nations have built up huge reserves of foreign dollars, creating global imbalances that contributed to the creation of today's economic crisis, it is precisely because they wanted to avoid ever again being forced to come, hat in hand, to the IMF. As the Wall Street Journal notes on Tuesday, in "An Empowered IMF Faces Pivotal Test," "where once the IMF demanded that borrowers dramatically remake their economies, the IMF is now taking a softer stance, and attaching few restrictions to its massive loans." This is not out of the goodness of its heart, but because few developing nations are willing to accept the conditions that the IMF once required.

Harvard economist Dani Rodrik, the always dependable contrarian, has been practically the lone voice to point this out:

The challenges the United States faces are familiar territory to the people at the IMF. If you hid the name of the country and just showed them the numbers, there is no doubt what old IMF hands would say: nationalize troubled banks and break them up as necessary....

The second problem the U.S. faces -- the power of the oligarchy -- is just as important as the immediate crisis of lending. And the advice from the IMF on this front would again be simple: break the oligarchy.

To which Rodrik responds:

I find it astonishing that Simon would present the IMF as the voice of wisdom on these matters -- the same IMF which until recently advocated capital-account liberalization for some of the poorest countries in the world and which was totally tone deaf when it came to the cost of fiscal stringency in countries going through similar upheavals (as during the Asian financial crisis).

Simon's account is based on a very simple, and I believe misguided, theory of politics and economics. It is an odd marriage of populist and technocratic visions. Countries fail because political elites always end up in bed with economic elites. The solution, apparently, is to let the technocrats (read the IMF) run your affairs.

Among the many lessons from the crisis we should have learned is that economists and policy advisors need greater humility. Too many of us thought we had the right model when it turned out that we didn't. We pushed certain policies with much greater confidence than we should have. Over-confidence bred hubris (and the other way around).

Do we really want to exhibit the same self-confidence and assurance now, as we struggle to devise solutions to the crisis caused by our own hubris?