Every president since Carter has been invited to Notre Dame, but GOP bullies are trying to block this one. They will fail. 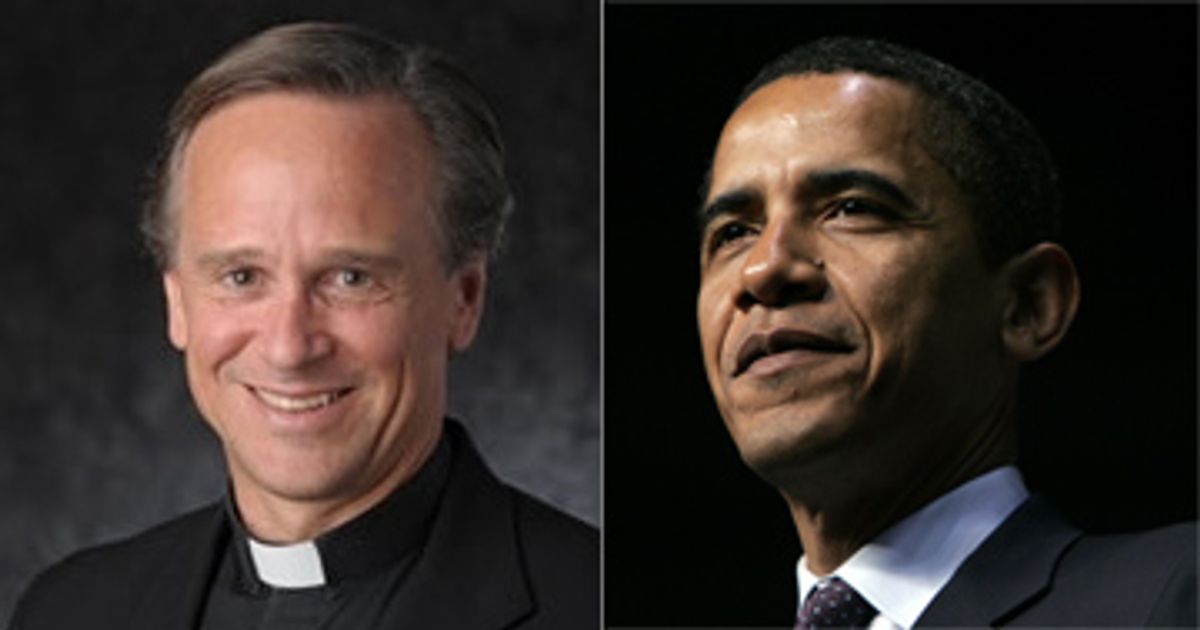 I've tried to ignore the controversy over the University of Notre Dame's invitation to President Obama to give its commencement speech in May.  I don't believe the effort to block his visit can succeed. For more than 30 years it's been a tradition for the renowned Catholic university to invite the new U.S. president to give the address and receive a doctorate from the law school. Nobody protested when George W. Bush visited, despite his ardent support for the death penalty, which the Catholic Church opposes.

But the growing movement to stop Obama's visit isn't your ho-hum sort of Catholic League media dust-up, where Bill Donohue harumphs on television and then goes away. It's part of a well-funded lobbying effort by a group of right-wing Catholics to run liberal Catholics, and dissenting doctrine, out of the church, and to recruit the remainder of the faithful for the GOP. As the L.A. Times' Tim Rutten reports, it's been organized by the Cardinal Newman Society, no relation with the nice liberal Newman Centers that do outreach to Catholic kids on college campuses.

This is a group of rabid right-wingers who came together to make sure Catholic universities enforce Catholic doctrine. They publish the work of ultra-right Opus Dei member Rev. C. John McCloskey, who has argued that "for a university to be truly Catholic," its faculty must be "exclusively" Catholic. Operation Rescue fanatic Randall Terry, who converted to Catholicism recently, is bringing his special kind of crazy to the movement. "The faithful Catholic world is justly enraged at the treachery of Notre Dame's leadership," Terry rants. "Notre Dame will rue the day they invited this agent of death to speak." Once a thug, always a thug.

Today the Washington Post's Michael Gerson weighs in with what purports to be a fair and balanced approach to the controversy. He urges the protesters to back off some -- they should respect the office of the president, if not Obama! -- but he accuses Obama of stiffing Catholic supporters in his first 70 days, due to his moves to lift the antiabortion gag rule on contraception counseling abroad and Bush's ban on federal funds for stem-cell research. Gerson warns darkly that Catholics are turning their backs on Obama, pointing to a Pew poll that found the number of Catholics who disapprove of his job performance has increased 9 percent over the last month (Gerson says 9 points, but it looks like it increased 14 points to me). But 59 percent of Catholics still think Obama's doing a good job, the same percent as Americans do overall.

Even more interesting is this Gallup poll, released Monday, that finds Catholics are actually more liberal than other Americans on the so-called moral issues the Cardinal Newman Society seeks to use as a wedge. Polling more than 3,000 people, Gallup found that Catholics are more likely to think abortion, stem cell research, gay relationships and sex before marriage are "morally acceptable" than non-Catholic Americans. Even devout churchgoing Catholics are more liberal on those issues than devout churchgoing Christians of other denominations.

Although Father Andrew Greeley's research has been documenting Catholic liberalism since the 1970s -- Catholics are more likely than other religious groups to intermarry, religiously and racially, for instance -- my people have long been stereotyped as close-minded. There's still some class disdain that hangs over from 19th century WASP derision of dumb white "ethnics," particularly the Irish.

This also has personal resonance with me because my daughter attends Fordham University, New York's great Jesuit institution in the Bronx, where she's a leader of the College Democrats and is thriving in the free-thinking, compassionate community she's found there. This month her College Republican colleagues are bringing Newt Gingrich, the twice-divorced GOP leader who in fact served his first wife her divorce papers when she was recovering from breast cancer. Not terribly Christian, if you ask me. But no one challenges Gingrich's right to speak at Fordham -- including me.

We don't need a new Inquisition in our Catholic universities, we need them to model reason and compassion, and most do.  One factor that helped us choose Fordham was a serendipitous NPR profile of Rabbi David Hartman, who runs the Shalom Hartman Institute for interfaith community in Jerusalem, and who credited his time at Fordham for helping him more deeply understand Judaism. That's the kind of environment a college student deserves; if Fordham ever adopted the Cardinal Newman Society approach, it wouldn't be Fordham anymore.

Luckily, Notre Dame's president, Father John Jenkins, is holding fast to his plan to host Obama, calling the president "an inspiring leader." According to Tim Rutten, 73 percent of Notre Dame students -- and 97 percent of its seniors -- support the Obama invitation. Young Catholics are even more liberal than their parents, so the work of the Cardinal Newman Society will be increasingly futile as the years pass. Futile, but noxious nonetheless.