I love my cousin Rush Limbaugh, even though I don't agree with him. Now please stop judging me by my last name. 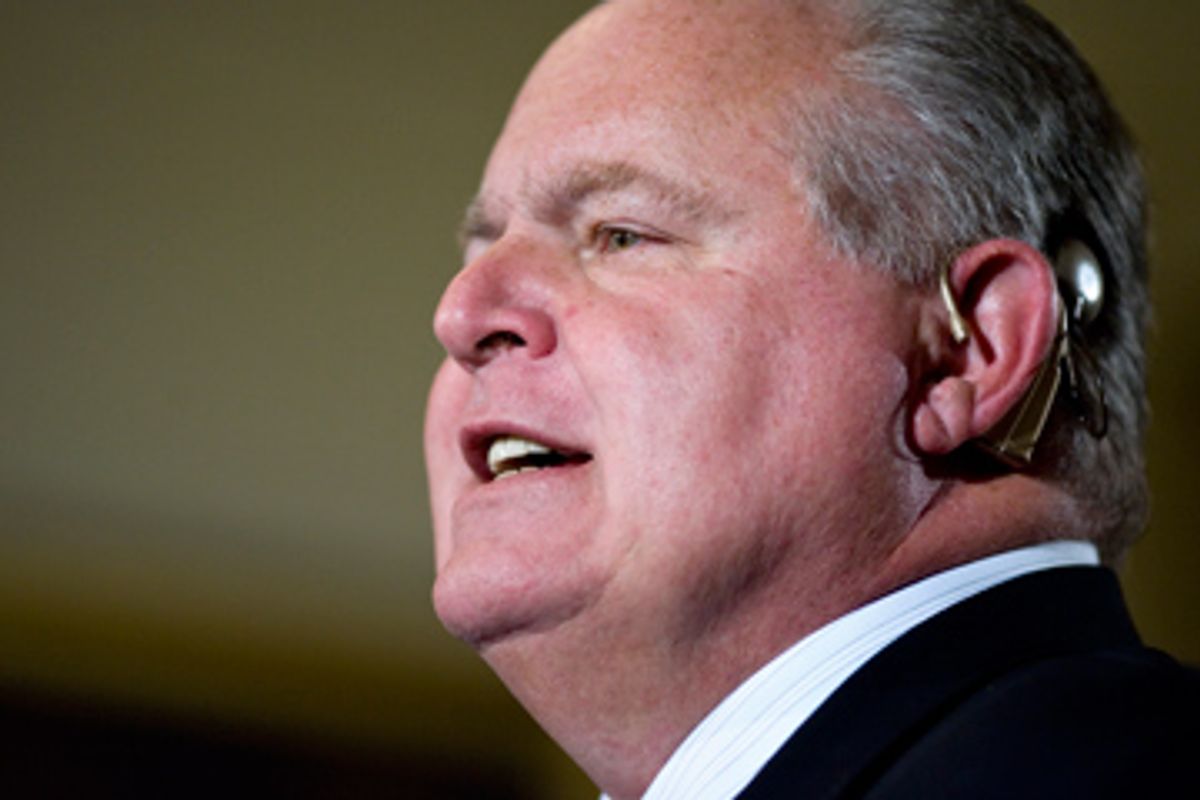 I find myself in Rush Limbaugh's library standing next to a leather couch upon which Ann Coulter is perched. The room is festive -- crowded with relatives, wineglasses, cigar smoke and loud conversation. I am glaring silently at my mom from across the room with my arms crossed in the "unapproachable way" I know she hates. Mom says I have to introduce myself to Ann because everyone else in the family has met her, Thanksgiving vacation is almost over, she is Rush's guest, and I am being childish and rude. I have never spoken with Ann or read any of her books, but based on her public persona, I have decided that she is someone I hate. I feel fine about this -- happy about this -- why would I want to talk to her?

And suddenly I realize that I have become the person I can't stand.

You see, I'm judging her based on her public persona before ever meeting her. And if we talk, and I actually like her, which I might -- that will mean she's become one more person I have to admit I like even though I'm not supposed to.

From third grade on, I have been asked, "Are you related to Rush Limbaugh?" My teachers' whispered questions about the man on the radio made me feel important, even though my 8-year-old comrades had no idea who he was, since he didn't appear on the Disney Channel or in ABC's Friday-night sitcom lineup. During those years, I didn't know who he was either. I knew Cousin Rusty kicked a football pretty well and always brought Cuban cigars to family gatherings. Sometimes he would get Aunt Patty to smoke one and my cousins and I would laugh at her coughing as we watched from the neighbor's trampoline. I was proud of him like I was proud of my brother, who's older than your brother and can beat your brother up.

It was pretty hit-and-miss but clear-cut all the same. People either didn't know who he was or didn't care or loved him or hated him. There was no like in the equation. If they had an opinion about him, once they learned of our connection, they offered that opinion.

Just when a school would know me, know my family, know Rush was my Dad's cousin, ask the questions, tell about their love or hate, my dad's career as a lawyer in the military would move us and the process would start over. Once again, new friends and acquaintances would introduce me as "the girl related to Rush Limbaugh."

And I would evaporate.

Limbaugh -- it was like when my dad would pick me up from middle school in his '87 maroon conversion van with the canoe strapped on top and my dog slobbering out the passenger window. Dad loved me and I loved him, but I just wanted him to disappear so I could blend in on the bus like all the other kids.

And it's still like being the girl who threw up in seventh-grade science class 15 years ago; the story/rumor/legend that no one has forgotten. (Her name was Eva.)

My cousin warned me before I left for college that it would continue. She had attended my university a few years before. On her first day of class, her professor asked about Rush and proceeded to tell the whole class why he hated him so much. She told me to be careful. She told me which professors not to take -- classes where I might suffer grade bias. But I didn't think anything of it; I mean, everyone has family members others don't agree with. I'm sure you have a grandpa or uncle out there who complains about the "queers" and the people who speak "Mexican" ruining his neighborhood. I don't like that, but I bet you're OK.

Then there are the questions. What's he like? Do you know him? Is he an asshole?

Well, he's the relative you don't see much, who shows up on Christmas Eve on his own plane with an anchor lady you didn't know he was dating until your friend's dad told you the night before. He's fairly loud, but all the Limbaughs are. He's that one over there with the cousins singing rowdy Christmas carols around the piano. Yeah, the one with the cochlear implant, the guy holding a humidor. He's Cousin Rusty, and he's OK.

Sometimes he invites you to his house for Thanksgiving, you and every single one of your relatives, all expenses paid, and he puts you up in a resort that makes you feel like a movie star. He gives you a room key that doubles as his credit card and you can't help but charge Chanel sunglasses on it for everything he did the previous year that had made your job as a new teacher in a liberal high school any harder.

He's the guy who puts "March of the Penguins" on his home movie theater screen for the little cousins to watch and makes sure his candy bowls are filled with jelly beans and doesn't swear when my nephew tries to throw his antiques down the stairs. He's the guy who came from nothing to something and knows what it feels like to miss Missouri.

One Thanksgiving he stands in front of all us relatives in his Versailles-looking living room, and before my grandpa prays over our meal, Cousin Rusty apologizes. He says he's afraid he has made it tough to be a Limbaugh this past year, and his voice breaks like I have never heard it do before. Cousin Rusty is OK.

Now that I'm at Columbia University, some relatives like to ask about the "climate" at school, and if I'm becoming "liberal," like it's a disease. I don't think they understand that you don't have to agree with your family to love your family.

Yet when people ask me about him or when I hear my name during roll call the first day of a new semester, I still get this complex. Will they like me less? Do they already have a view of me? Have they pegged me as loud, opinionated and ultra-conservative? Should I raise my hand less? Do they think I'm looking at their Obama buttons with disdain? Should I wear a T-shirt announcing I didn't vote for Bush or McCain?

Would it be OK if I did?

Typically, I catch myself. Hey, slow down, psycho, take a deep breath. Most likely, other people aren't thinking anything. They probably weren't even listening when you were introduced, or already know, or really don't care. Who am I to think anyone would care about my stupid last name?

This is the camp I'm in most of the time. But then, just when I'm sitting pretty with all the Smiths and Joneses, I find myself with the registrar of my college trying to pay my library fine. I use my credit card and the little old lady asks to see my I.D. She looks like my grandma, and I smile. She smiles.

And a year later I find myself talking to my mentor the first day of the school year -- my first day as a high-school teacher. I ask my mentor if she thinks my last name will be a problem with the students or parents because the district the school is in tends to be very liberal. She looks surprised at my question and asks, "Why would it be a problem?"

"I don't know," I say, feeling silly. "It just sometimes is." And as we're talking, she walks me to the main office to show me the mailboxes and to introduce me to the secretary. Upon introduction, the secretary says, "So, do you do drugs too?" and I try not to look upset, but I also don't want to laugh it off, because I don't think what she said is funny.

Then I am standing at the ticket counter at LaGuardia Airport, trying to get on another airplane because my flight to Chicago has been canceled. The man behind the counter tells me, "You're out of luck because I'm the biggest Democrat you'll ever meet." And instead of sputtering and fuming with indignation, I sputter and fume with shame because as I walk away, I say over my shoulder, "I didn't even say I was related." Not too proud of my last name? Not too proud of my family?

Even though our ideologies do not align, I have always admired Rush for his humor and savvy. I would like to believe that he has created a semi-tongue-in-cheek persona for entertainment's sake, a self-aware self-parody, the original Stephen Colbert. While his haters have always been too busy running in angry frenetic circles to notice the irony, Rush Limbaugh, the caricature, has had the time of his life; and there's something to admire in he who gets the last laugh.

Yet lately, I must admit, being a Limbaugh has been a little tough. When listening to Jon Stewart or just about everyone lay into the latest outrageous thing Cousin Rusty has said, it just doesn't seem like he's in on the act, and that makes it hard for me to separate my cousin from his persona. Maybe it's just me -- afraid of facing my student loans in our crumbling economy, or maybe I have officially become one of the "crazy liberals" my uncles always warn me of, but it seems that Rush is no longer just playing the political game he plays so well. Rather, he has been attacking hope, and now it feels like there's little room for that.

I rarely listen to Rush on the radio. But when I do, it's because I'm scanning stations while driving, and I happen to hear his voice. As a family member I'm not as close to him as my mom and dad, my grandma and grandpa, but his voice still reminds me of home. He sounds like my dad and a few of my uncles, he sounds like himself, and it makes me homesick, if that makes any sense at all. So I listen for a few minutes. I rarely agree with or even like what he says, but I can't hate him. In fact, I love him. He's family.

And as for Ann Coulter? Well, my mom was watching me closely and I had to think of something to say. "Hi," I said. "Your hair is really long." And that was about the closest I could come to being nice.

Julie Limbaugh is a writer from St. Louis, Missouri. Currently an MFA candidate in the writing program at Columbia University, she is working on a collection of essays.