The star of "In Treatment" talks about the role of a therapist, the challenge of being a good listener and why everyone needs a good chair. 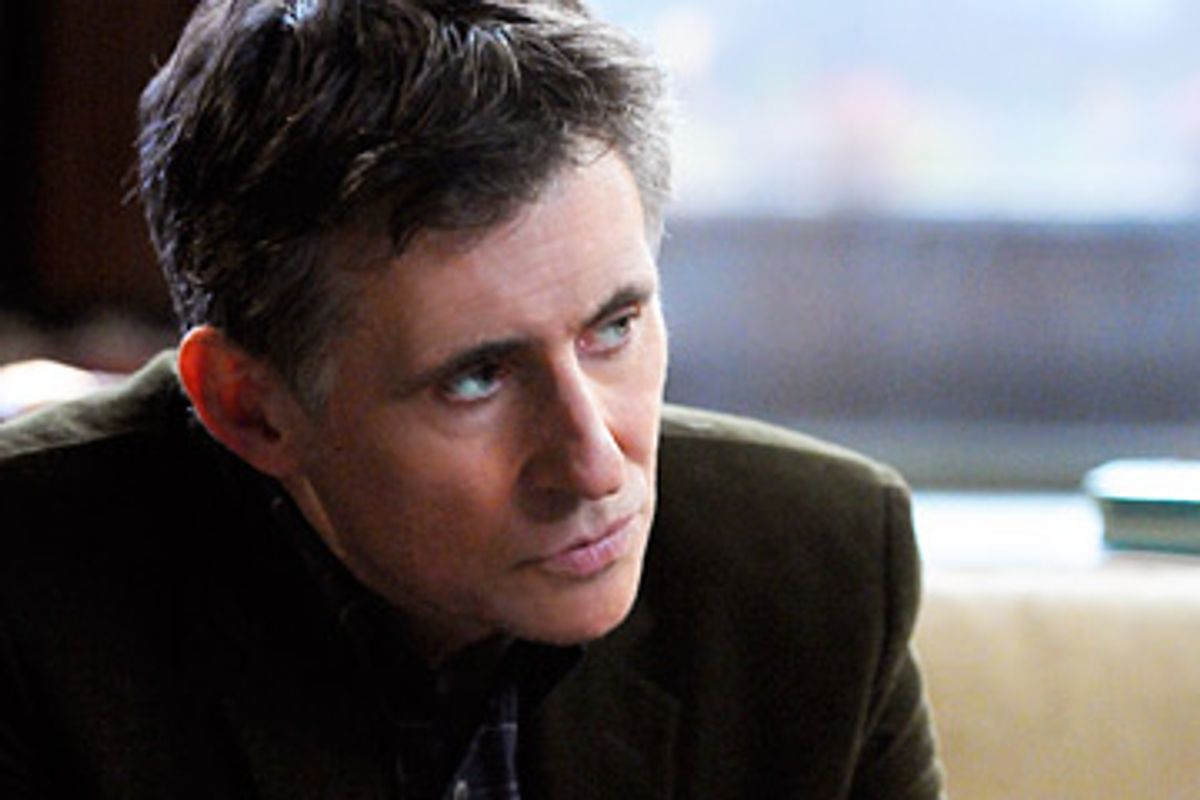 Gabriel Byrne is seated on the couch, index finger pressed to his temple. Much like the therapist he plays on "In Treatment," he has been talking to people all afternoon, strangers who shuffle in and out of short sessions in this small room, passing each other awkwardly in the hallway. He looks tired. Tired but kind. His piercing blue eyes are ringed with circles but when he smiles, they sparkle.

"Do you feel like a therapist right now?" I ask, taking a seat in a chair across from him.

"No, thank goodness, I don't," he says. Of course, he has that lovely soft Irish accent, so it sounds like "tank."

Byrne has just wrapped the second season of "In Treatment," the compulsively watchable HBO series in which he plays Dr. Paul Weston, a therapist in as much turmoil as his patients. It's a show that takes the same mundane setting in which we find ourselves now -- a couch and a chair, two people in a room -- and makes it the backdrop for a tense 30-minute mystery, as suspenseful as any detective show, though more intimate and contained. Last season, audiences watched as Paul grappled with his patients -- from a young and manipulative beauty in love with him to a bitter couple who seemed to loathe him, themselves and each other. Meanwhile, he fought professional exhaustion and the dissolution of his marriage, all of which he wrestled with in sessions with his own therapist, played by the incomparable Dianne Wiest. The show is based on the Israeli blockbuster, "Be' Tipul," and though it was not the crashing ratings success of, say, "The Sopranos," "In Treatment" was praised by critics and Byrne won a Golden Globe for his portrayal. Indeed, it is a triumph of understatement -- what he does not say is as magnetic as what he does.

From his earliest roles, Byrne always came across as a keen observer. Never the prettiest bloke in the room, or the showman, he instead gave audiences a sense of his sly intelligence in movies like "Miller's Crossing" and "The Usual Suspects." His eyes told us he was on to something. Despite a public marriage to actress Ellen Barkin (the couple separated in 1993 and have two teen children together), despite opening up about the bruises of an Irish upbringing or his own struggles with alcohol and depression in his 1995 autobiography "Pictures in My Head" and the 2008 documentary about his life, "Stories From Home" (which played at a Galway film festival), he has always seemed darkly mysterious and inaccessible, which of course made him all the more dashing. He may be stuck in a chair for 30 minutes on the show, but he still comes off as a romantic hero, even if the character -- deeply flawed as he is -- is somewhat antihero.

Last year, Salon included Byrne in a list of the sexiest men living. Not bad for a man who is 59 years old. Byrne thanked me for the honor, which he found out about when he walked on set one day. "The whole crew burst into applause," he said, coming close to blushing. "It was really very nice."

On Sunday, HBO begins the second season of "In Treatment," which thrusts Paul into a new life (separated) and a new city (Brooklyn, N.Y., where Byrne actually lives with his girlfriend), and introduces us to a new crop of people struggling to piece their worlds back together. The first four episodes promise the same delicious, simmering conflict of the first season, as story lines about a stubborn young woman refusing to treat her cancer or a little boy ensnared in his parent's divorce find counterpoint in Paul's own troubled life.

In the HBO headquarters in Manhattan, I spoke with Byrne briefly about the challenges of his role, why we're in the middle of a revolution, and the things every person should know about buying a good chair.

To me, so much of the show seems to be about the stories we tell ourselves. People come into Paul's office and they are so convinced that they are self-aware and yet, as you watch each episode unravel, you realize just how deluded they are.

It's the difference between objective and subjective reality. Robert Burns, the Scottish poet, has a line, "Oh to have the power to see ourselves as other people see us." Your subjective reality is your truth. And the role of a therapist is to be objective, to be detached and to give you a sense of a narrative of your life, to present it in a way so that you might alter the way you see the world.

So when you're doing a role where 99 percent of the time you're sitting down, how does that change things?

That changes things a lot. A huge amount. Your body language is constricted. All that's left is your eyes, your physical body language. It's like being in a wheelchair. Part of the character is his stillness. In order to really listen, you have to be still. The danger there is that it becomes dramatically uninteresting. To make that interesting, you really have to be listening so that when the camera goes back to you, the audience has to say, "Oh, he's thinking." So what on paper seems like a pretty simple role -- you get to sit in a chair, you ask a bunch of questions -- it's much more difficult than that.

By the way, I have a different chair this season, which changed my body language. I know a lot about buying chairs now. Don't buy a cheap chair. It may look good, but it will be uncomfortable after a couple of weeks. Buy a chair that allows you comfort and flexibility, that you don't sink too much into it, that supports your spine.

You mentioned listening. For the audience, part of the drama of each show is watching Paul as he listens, trying to decode what's going on in your mind as you hear these people's stories. And I always wonder, how do you calibrate how much to show about what you're thinking?

Another big acting challenge is to find new ways of listening, finding the truth of what the other person is trying to say, after you've been told the same thing 24 times. Even when you're off-camera, you have to give it back to the other actor, so that by the end of the day, you're utterly drained.

And you don't get much of a reprieve in this show.

I don't think there's any scene that I'm not in this season. I think it's 1,500 pages to memorize. That's a hell of an amount. But the brain is a muscle -- if you use it, you improve it. I can now speed-read. I could always memorize my lines, but I've come up with a way to memorize the relevant points, and work in the logic around it.

Let's talk about where Paul is at the beginning of this season.

He's moved into a new stage of his life. It's a transition time for him. He's still living with the remnants of how he behaved in the first season -- the death of the pilot he let fly, the consequences of his affair, the split-up of his marriage -- and he's dealing with a new raft of patients.

And he moves to Brooklyn. How does it change the dynamic for his practice to be in New York?

It doesn't really. People are the same everywhere. They may speak with different accents, but the needs and desires are the same. They have the same set of existential crises.

It does bring him back in touch with his past, though, and one of the people he begins to treat is a former patient named Mia, played by Hope Davis. Can you tell us a bit about her?

She's a 42-year-old woman who's not married, and really wants a child, and has an incredibly successful career. That wouldn't have been dramatic material 20 years ago, but it is now, because the role of the woman in the workforce has changed, the role of women in society has changed, and marriage itself has changed. One of the reasons the show is successful, I think, is that it speaks to the anxieties of our time, and this is one I think will find a lot of resonance -- there are women who are married who wish they had a career, and there are women who have a career and wish they had a child but don't.

The traditional notions that we had in society have changed so much. Everything that we took for granted five years ago is now debatable. I think we're living through a profound revolution. Not a revolution in the sense of people attacking the castle with pikes and so on. But the world we live in is undergoing a profound revolution -- economically, culturally, socially, spiritually. We haven't called it yet a revolution, but that is what it is. The world will not be the same in five years. And these characters that are thrown up, seemingly randomly, in the series should also be put in the context of the changes in the world.

In the first few episodes, there are references to how barraged we are by media. With our iPods and our iPhones, a 30-minute, uninterrupted conversation is increasingly rare.

This woman puts forward a plausible theory that technology has actually altered the physical structure of the teenage brain. Which means that the generation after this generation will communicate in a way that will make how you and I think seem like something from the 17th or 18th century. But yes, 30 minutes of uninterrupted conversation, for that to be successful in television is an achievement. Thirty minutes of conversation with another human being in this day and age is an achievement.