In its last episode, the charming (and canceled) cop show finally unlocks the secrets of our hero's past. But they're not what you might expect. 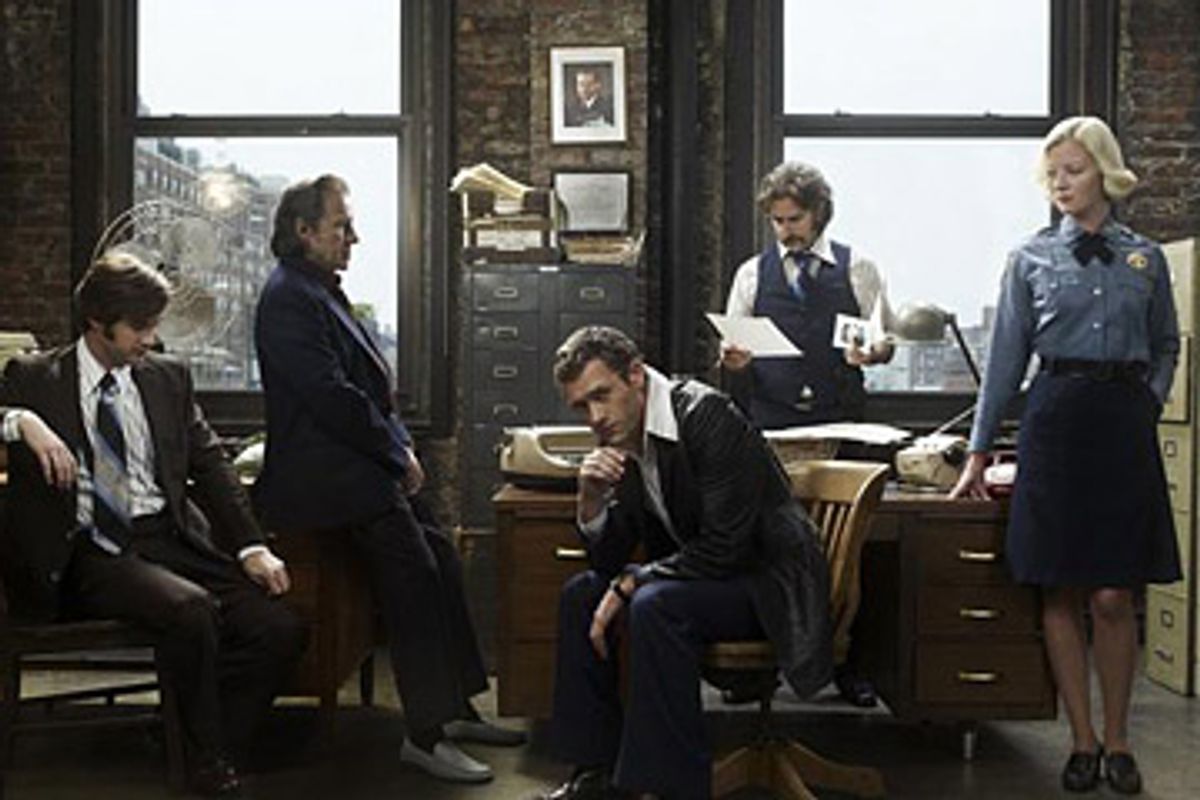 For anyone who truly loves New York -- whether or not you live here is inconsequential -- ABC's "Life on Mars" was the anti-"Sex and the City," a show that captured the ways in which the city is blissfully slow to change, even as it seems to be changing so rapidly. "Sex and the City" -- a smart, stylish ensemble comedy in its early seasons that devolved into a tiresome star vehicle for Sarah Jessica Parker -- is a thorn in the side to many of us who live here. Too many outsiders seem to believe that every New York woman is a spoiled creature who lives to shop, and that we toddle around on Manolo Blahniks that cost half our rent. We also carry expensive handbags and giggle with our girlfriends every Sunday over brunch. "Sex and the City" gave New Yorkers a bad name, at least among people elsewhere in the country who perhaps believe too much of what they see on TV.

But "Life on Mars," even though it was set not in the present-day New York, but in the city as it was in 1973, is one of the most affectionate shows about New York City I've ever seen, which is just part of what makes its cancellation so painful. This "Life on Mars" was based on a BBC series of the same name; when I wrote about ABC's "Life on Mars" briefly last summer, readers rushed to tell me how superior the U.K. version is. I haven't seen the U.K. "Life on Mars," and although I'm looking forward to watching it, obviously it will be lacking one of the things I love best about the ABC version: The New York-centricity of it all.

In Wednesday's final episode, NYPD detective Sam Tyler (played by the Irish actor Jason O'Mara) finally unlocked the secret of how and why, after suffering a car accident in 2008, he suddenly found himself in 1973 New York. In his 1973 life, he's still a detective, but with a completely different set of colleagues on the force: The hirsute bully with a chip on his shoulder, Ray Carling (Michael Imperioli); the sweet one whom no one can dislike, Chris Skelton (Jonathan Murphy); the pretty blond female underling who's trying to show she can do more than just fetch coffee, Annie "No Nuts" Norris (Gretchen Mol); and the boss, Lt. Gene Hunt (Harvey Keitel), who looks like a grown-up elf with a bad disposition.

During the series' 17 episodes, Sam encountered a younger version of his mother and father (played by Jennifer Ferrin and Dean Winters, respectively) and, weirder still, the child version of himself, a redheaded rapscallion with enormous eyes (played by Caleb and Christian Wallace). He feels he's been sent back in time for a reason -- but what, exactly, might that reason be? Meanwhile, he longs to get back to 2008, chiefly to reconnect with his fiancée (played by Lisa Bonet). But he's also falling in love with Annie, which makes him question whether staying in 1973 wouldn't be such a bad thing after all.

The series finale wrapped everything up in a way that was, in a word, dumb. It turns out Sam's 1973 dream was, yes, all a dream. Sam wakes up in 2035, blinking like Dorothy Gale, and remembers that he's a U.S. astronaut on his way to Mars. His astronaut colleagues all played a part in his imaginary 1973 adventure: We see Imperioli denuded of his mutton chops, Mol with long, limp brown hair. Everyone is dressed in space suits instead of wide ties and Sansabelt slacks.

It was an unsatisfying wrap-up, but also, clearly, a quickie solution. The show's cancellation was announced just a month ago; the writers, after setting up numerous story arcs that were clearly meant to stretch beyond one season (or at least pave the way for a second season), obviously had to come up with a single grand answer, fast.

But that patched-on ending is just 10 minutes out of the show's life, and it doesn't negate the beauty of the episodes that came before it. The mysterious intricacies of "Life on Mars" -- just what were those little space-ship thingies, buzzing around Sam all the time? -- weren't its strong suit to begin with. What made the show worth watching were the relationships between the characters, the actors' performances, the music and, of course, the city holding all of those things in its smoggy, grudging embrace.

The performers all hit their stride early in the season: O'Mara's almost nondescript good looks allowed him to carry a range of dramatic moods, without making anything look too forced or overdone. Mol played Annie as a woman biding her time in a man's world; she may be sweet, but her sweetness is tempered with uncompromising intelligence and good instincts. And throughout the series, Keitel simply looked as if he were having a ball -- loose and funny but also, at times, deeply, grumpily touching (as when he sat by Chris' hospital bed, after the detective had been wounded and rendered unconscious, reading him the funnies -- shades of the way Mayor LaGuardia read the funnies to New York kids over the radio during the 1945 newspaper strike).

One of the great pleasures of watching "Life on Mars" was seeing what pop relic would show up on the soundtrack each week. The Association's "Windy," the Raspberries' "Go All the Way," the Sweet's "Little Willie," the Partridge Family's "Point Me in the Direction of Albuquerque": Every week you'd hear something you hadn't thought of in years, sometimes for good reason, though the overall result was a carefully curated overview of top-40 radio of the era. Even the show's incidental music -- often just a few bars used to accent a particularly tense or dramatic scene -- was clever, borrowing heavily from the vibe of '70s cop shows.

It's not such a surprise that ABC would cancel "Life on Mars." The network has a history of taking chances on unusual shows and then dropping them before they have a chance to find an audience. That list includes, but isn't limited to, the 2001 "Thieves," with John Stamos and Melissa George; the 2004 youth-ensemble show "Life as We Know It"; and the 2003 "Karen Cisco," based on a character created by Elmore Leonard and starring Carla Gugino.

But at least "Life on Mars" got its brief chance to show us another New York (one that's different, even, from other shows filmed on location, like the unstoppable "Law & Order"), a New York that wasn't a particularly nice place to live and yet, even in its tattered, busted state, refused to cede its place as one of the great cities of the world. Week after week, "Life on Mars" would show us remnants not just of the 1970s New York, but of an even older one. The location scouts found places -- sometimes just an old storefront with a striped awning, or a brownstone wearing its eternal poker face -- that hadn't changed in 35, or maybe even 85, years. "Life on Mars" captured, without even trying, New York's sense of continuity. The city is changing rapidly: Those old mom-and-pop storefronts are being replaced by banks and chain stores. But New York is so large that, thankfully, it can't change at once. There are parts of it that are old and tattered around the edges and that are, for that reason, incomparably beautiful. Those are the parts of the city that "Life on Mars" sought out and celebrated, seizing for itself an excuse to visit the past. Watching the show could be a little like checking in on the lost city of Atlantis.

The show's time-travel love letter extended to fashion, too, particularly in the case of Gene's white loafers, which he wore in any season, with any outfit. These bad-taste moccasins are the antithesis of Carrie's trademark Manolos: They're so not New York -- and therefore they're about as New York as you can get.

For more coverage of the season finales of your favorite shows, click here.