It really was my father's Oldsmobile

As General Motors prepares to sell off or kill a slew of brands in order to survive, a Lansing native remembers the first member of the G.M. family to die. 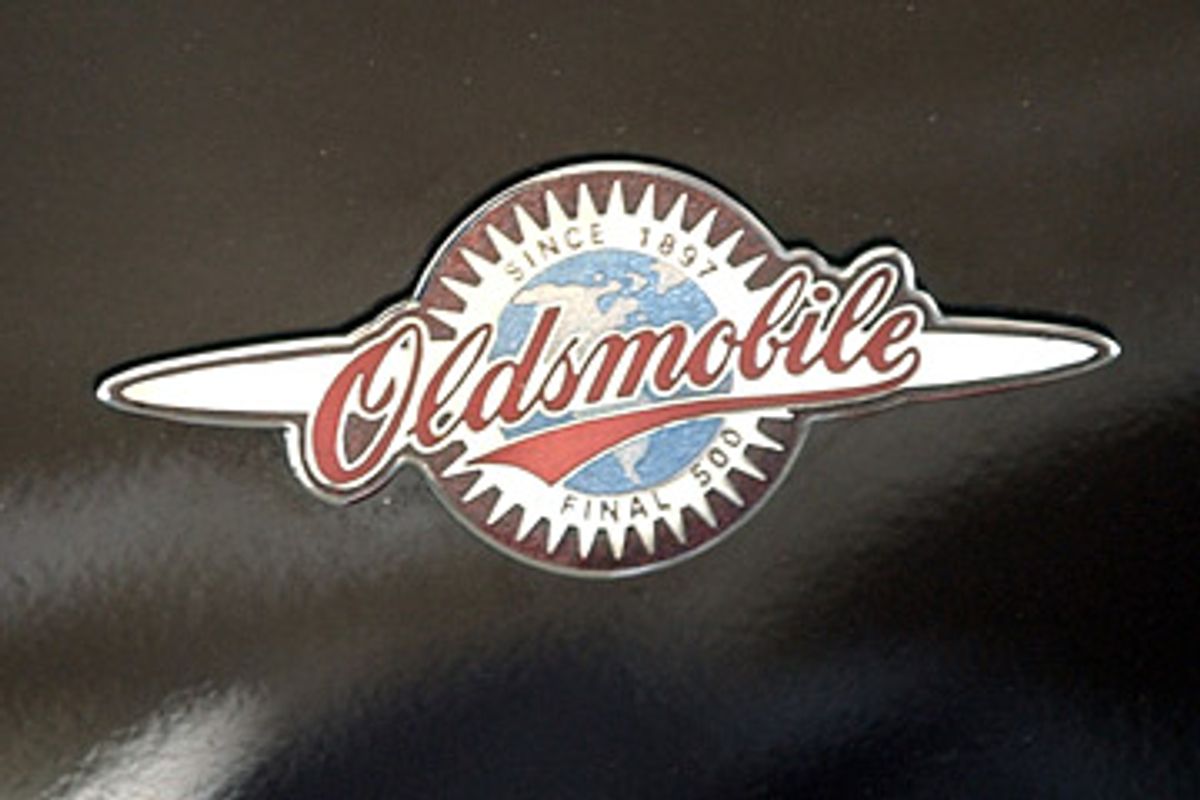 A commemorative logo is seen on the Alero, the last Oldsmobile to roll off the assembly line April 29, 2004, in Lansing, Mich.

The same presidential task force that fired General Motors Chairman Rick Wagoner has another suggestion for the company: Fire some of your cars, too.

"GM has retained too many unprofitable nameplates that tarnish its brands, distract the focus of its management team, demand increasingly scarce marketing dollars, and are a lingering drag on consumer perception, market share and margin," the task force said in its report.

As General Motors considers phasing out such all-American rides as Buick, Saturn and GMC, I’m feeling a pang for the last car to be crowded out of the company’s lineup of look-alike autos: the Oldsmobile.

The Oldsmobile was first built in my hometown of Lansing, Mich., all the way back in 1897. It was Ransom E. Olds, not Henry Ford, who pioneered the automotive assembly line. Olds sold out to General Motors in 1908, but his car was so successful that it took even G.M. a hundred years to fuck it up. In fact, in the 1970s and '80s, Oldsmobile was moving over a million units a year, making it the nation’s third most popular brand, after Ford and Chevy. One of those units belonged to my dad -- a green Delta 88. The brand had a well-deserved image as middle-class and middle-aged. According to market research, the average Olds driver was a 62-year-old who wanted to advertise that he'd achieved a respectable but not ostentatious standard of living. Cutlass Supremes and 98s were seen in the parking lots of every public golf course, Methodist church and state-college football game in America, and helped define the era's look of squared-off sedans.

In its day, the Oldsmobile made a serious impression on popular culture. The song "In My Merry Oldsmobile" was the "Little Red Corvette" of the sheet-music era, a sly celebration of that new pastime, parking. ("They love to 'spark' in the dark old park/ As they go flying along/  She says she knows why the motor goes / The 'sparker' is awfully strong.") Jackie Brenston and Ike Turner’s "Rocket 88," considered the first rock 'n' roll song, was about an Olds. TV detective Joe Mannix drove a Custom Toronado. And, of course, there’s REO Speedwagon, an Illinois band that took the name of a Lansing-made truck (REO stands for Ransom E. Olds), and have been rightly worshiped in my hometown from their bar-band days to their county-fair dotage. (Appropriately, they peaked commercially in the early '80s, about the same time as Oldsmobile.)

"Oldsmobile became boxed in between Pontiac, which was marketing a glitzy brand of 'excitement,' and Buick, which held a firm grip on more mature sedan buyers," wrote automotive journalist Brock Yates.

Of course, Oldsmobile may be best remembered for the ad campaign that helped kill the brand. Seeking to update the car’s image, G.M. ditched the sedans for the sportier Intrigues and Aleros. To tout this change, the company came up with the most disastrous slogan in advertising history. "This is not your father's Oldsmobile" became a national catchphrase, while reminding the world that the car was driven by exactly the kind of people its name suggested. (Would history have been different if R.E. Olds had been named R.E. Young, or if he’d at least possessed a smaller ego than Henry Ford and Walter P. Chrysler?) Oldsmobile’s general manager even suggested renaming the brand "Aurora." When that didn’t fly, he just left the name off the car. The Intrigues and Aleros -- the Oldsmobiles that dared not speak their names -- attracted some younger drivers, but at the cost of senior citizens who had cherished the Cutlass, which was as roomy and comfortable as a pair of Sansabelt pants. Showing its unique talent for self-inflicted wounds, G.M. had managed to scare off Oldsmobile's most loyal customers without minting enough new ones.

In Lansing, we’d seen this coming for years. First, in the 1980s, G.M. took down the red neon "Oldsmobile" sign that glowed above the Grand River plant, and replaced it with a plain white placard for the "Buick-Oldsmobile-Cadillac Division." That meant Oldsmobile was no longer a special brand, with a distinctive identity, but part of a roster of interchangeable sedans. Guys who worked in the shop stopped saying, "I work at Olds." Now, they worked for a nameless conglomerate, "B-O-C." Then all the Olds executives were pulled out of Lansing, and transferred to Detroit.

When G.M. announced Olds' death sentence, in 2001, I considered buying an Alero, just so that, for once in my life, I could floss the local whip.

"Why do you want to buy an Oldsmobile?" my brother asked. "You won’t be able to get parts."

"Um, I think you’ve got it backward," I told him. "They’re getting rid of Oldsmobile because its parts are exactly the same as every other G.M. car's."

G.M.’s image problem hasn’t changed, as today’s Saturns, Chevies, Buicks and Cadillacs compete to look as much like each other as possible.

The last Oldsmobile Aleros, manufactured in 2004, are on the verge of outliving their five-year warranties, and will soon begin sliding the ownership ladder, until they’re driven only by pizza-delivery guys and community-college students. But the Olds name lives on, at least in Lansing, where children go to Reo School, and take field trips to the R.E. Olds Transportation Museum, and the minor-league Lugnuts play in Oldsmobile Park. The rest of you have your copies of REO Speedwagon's "You Can Tune a Piano, but You Can’t Tuna Fish." I suggest listening to Track 1, "Roll With the Changes."