The director of "Superbad" grows up with an engaging movie about young love, crappy amusement parks and the listless days of summer. 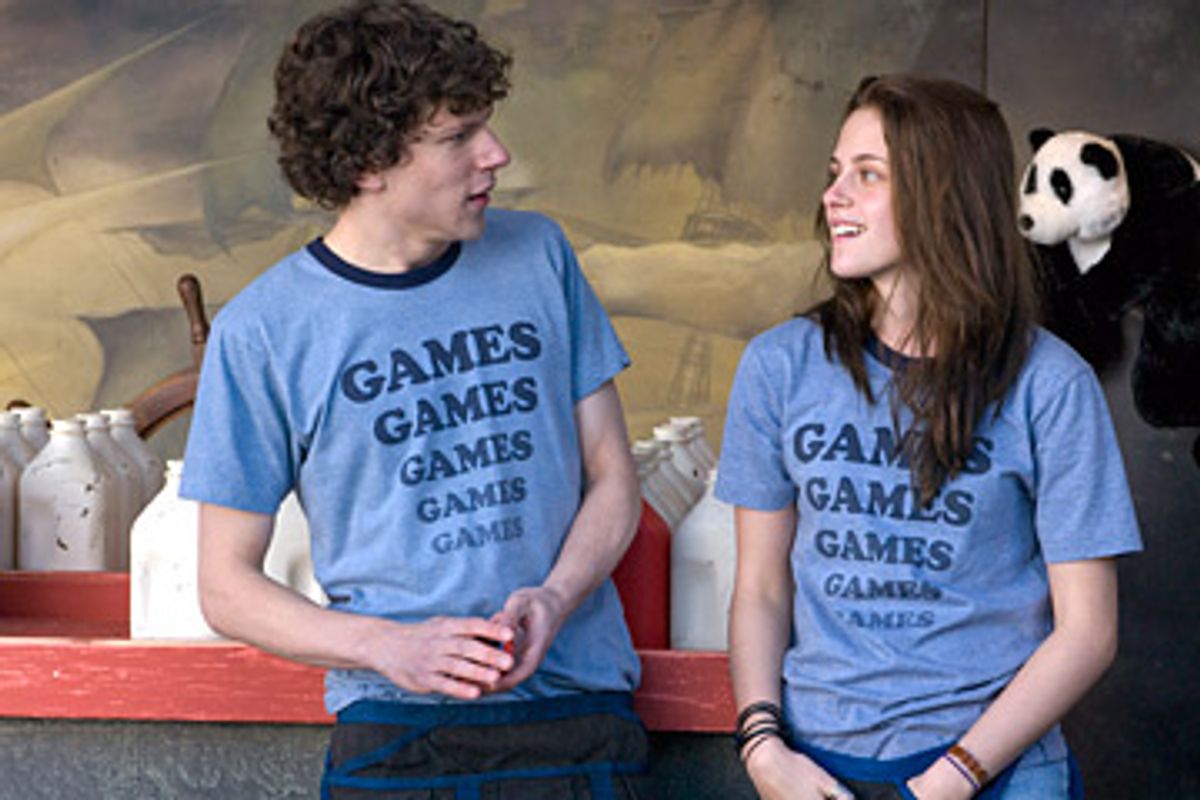 "Adventureland" is more a collection of emotional textures than a story with a plot: It's 1987 and James (Jesse Eisenberg), a recent college grad, is looking forward to taking a summer trip before heading to graduate school in the fall. But he needs his parents to help out, just a bit, and his dad (played by Jack Gilpin) has recently suffered some financial setbacks. That means James will have to stay close to home -- Pittsburgh, that is -- for the summer and get a job. With no work experience, he ends up at Adventureland, a third-rate amusement park replete with an assortment of unsafe-looking rides and, as one character puts it, "many shitty games."

No one who works at Adventureland -- including sweet, bespectacled Russian-lit enthusiast Joel (Martin Starr) or low-key NYU student Em (Kristen Stewart), who just wants to escape her judgmental stepmom -- really wants to be there. So they make the best of it, partying at night (and sometimes during work hours), engaging in ill-advised liaisons and listening to music by the likes of the Replacements and Hüsker Dü, biding their time until they can move on to something, anything, else.

And that's it, more or less -- although somehow, by the end of "Adventureland," you feel you've been left with more rather than less. Mottola was the director of the 2007 summer hit "Superbad," an openhearted if uneven picture about the misadventures of misfit schoolkids (and the movie that made Christopher Mintz-Plasse's character, the vest-wearing "McLovin," into an icon of nerd cool). "Adventureland" is a quieter, more grown-up picture than "Superbad" was. There's some gross-out humor, and quite a few pot jokes, but those are the movie's trappings, not its substance.

In fact, despite those raunchy touches, "Adventureland" is so delicate that at times it seems likely to slip off the screen. There isn't a lot of tension to hold the story together. But Mottola (who also wrote the script) and his actors manage to shape the movie into something whole and tangible, capturing, among other things, the shapeless listlessness of summer, especially at that age when you're technically an adult and yet you're left waiting for life to begin.

The key is that Mottola doesn't come at the story with a sense of superiority toward his setting or his characters. Adventureland is the kind of down-at-the-heels joint that perhaps has seen better days, or perhaps not -- maybe it's always been crummy. The games are rigged so that it's almost impossible to win the big prize: In fact, the husband-and-wife team who run the park (played by Bill Hader and the always brilliant Kristen Wiig, both of whom make the best of their smallish roles) strongly discourage employees from allowing anyone to win the big kahuna of prizes, the "giant-ass" stuffed panda. This is the kind of place where bored kids leave their mark on walls and fences with spray paint, a way of reminding the world that they a) exist and b) can't spell: At one point James, who's just gotten his degree in comparative literature, notes that some hapless aspiring devil-worshiper has scrawled "Satin Lives" on a wall.

Mottola also gives us a sense, without hitting us over the head, of the class distinctions between his characters -- and of how class has shaped them, for better or worse. At the beginning of the picture, it appears that James' parents are pretty well off -- they live in a nice house and have been able to put him through school. Then again, his situation is much different from that of one of his super-rich school pals, a guy he's planning to room with in New York when the two hit Columbia grad school in the fall. And it's also much different from that of his Adventureland co-worker Joel: Played marvelously by Martin Starr, Joel is a gawky bookworm in a Dutch-boy haircut. He has the driest sense of humor and the gentlest, most laid-back demeanor of all the Adventureland folk. And when James goes to his house to visit, we get a sense of the vast difference between how these two grew up. Joel greets James at the front door of his family's modest clapboard house and requests that James meet him out back -- he doesn't want his friend to see how messy and cluttered the house is. "Out back" is barely a backyard -- this is one of those houses that doesn't have a real yard, only an unlandscaped grassy hump, furnished with a few lawn chairs and one of those umbrella-type clotheslines.

That's not to say that Mottola pities his characters -- he never makes them look pathetic. But his choice of details, like that mini-backyard, is pitch-perfect; when Joel confesses his insecurities to James, we understand them better because we've seen that backyard. It's clear Mottola has a great deal of affection for his characters, even the supporting ones: There's Lisa P. (Margarita Levieva), the hot girl whom everyone wants to go out with, who's essentially sweet but who's also quick to pass judgment on other women. (When James manages to score a date with her -- actually, she's the one to ask him out -- he brings her to a local "fancy" restaurant; she's wearing a hot-turquoise dress with leather trim on the shoulders, a detail so painfully era-specific it almost brought tears to my eyes.) Then there's Ryan Reynolds' Mike, the park's maintenance man. He's really a musician -- supposedly, he once played with Lou Reed -- and among the other park employees, his cool quotient is high. But Mike will always work at Adventureland, after many of the summer kids will head back to school or move on to real jobs. As Reynolds plays him, Mike isn't a pathetic character, but he is one who knows his place: He knows the value of his musician's mystique, and he milks it for all it's worth.

Mottola's lead characters, James and Em, are so understated that they come close to fading into the detailed suburban universe around them. But Eisenberg and Stewart ultimately have enough presence to shine through. Eisenberg -- who played the teenager Walt in Noah Baumbach's "The Squid and the Whale" -- takes some getting used to: Beneath that boyish tousle of curls, he's got the eternally trusting face of a pushover. But the performance deepens and grows as James makes a few dumb mistakes, and then makes good on them. By the end, Eisenberg's face has lost its annoying guilelessness -- it looks more like that of a thinking, responsible adult.

You can see why Stewart's Em would inspire that kind of change in him. Stewart -- seen most recently in the teen blockbuster "Twilight" -- doesn't push forward in this role. She lets us (and James) come to her, and her low-key approach works. Her Em is the groovy girl who knows what's what. At one point James assesses her LP collection and praises her for having all the right names in it: Eno, Big Star, his own personal favorite, Lou Reed. She accepts the compliment, though she doesn't need to have her good taste affirmed. Little wonder James is so taken by her. With "Adventureland," Mottola explores what it's like to feel awkward when all you really want to be is cool. But mostly, he affirms that it's cool to be kind.