Call the time of death: After 15 years, "ER" brings back its old stars and turns off the paddles for the last time. 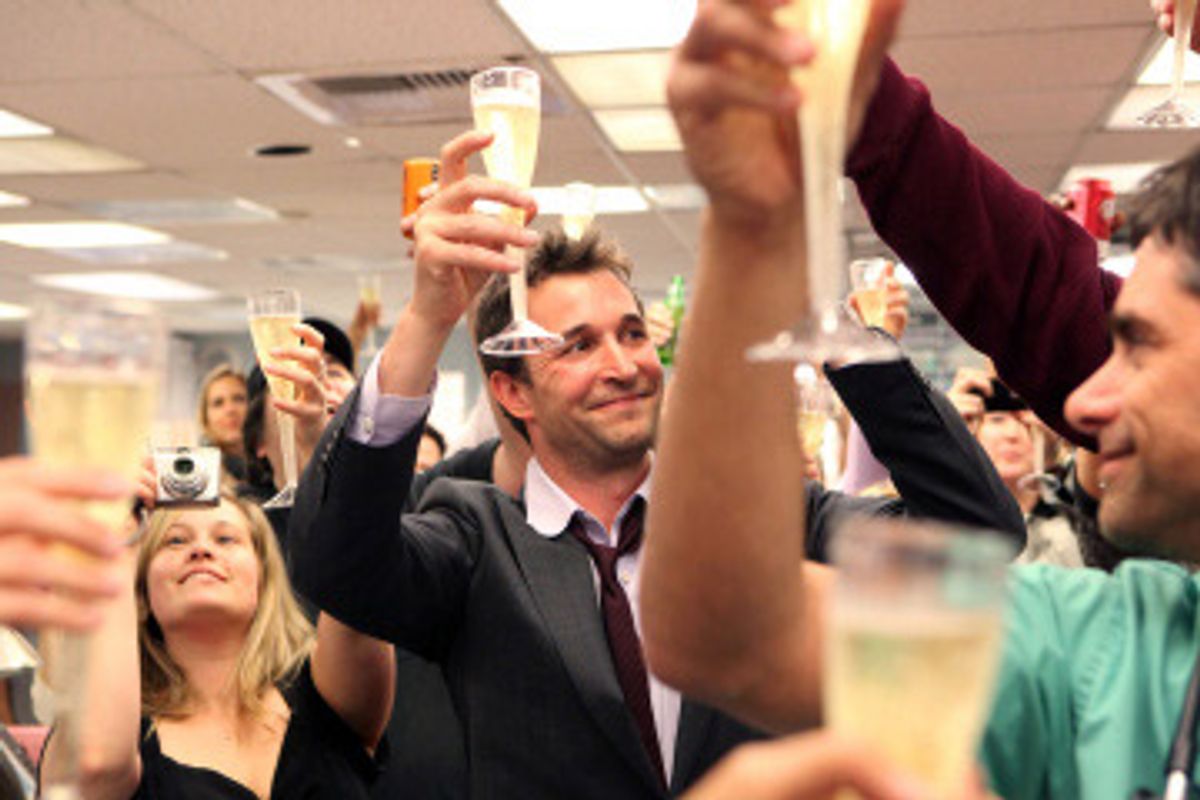 I have to admit: I hadn't been watching "ER" much, at least for the last five years or so. I was a "St. Elsewhere" fan in the 1980s, I got hooked on "ER," and then my daughter got hooked on it with me and loved it more. I still honor the memory of its greatness and our mother-daugher bonding over it. (A slight digression that's more entertaining than the disappointing finale, trust me: When my daughter met George Clooney at a screening of "Good Night and Good Luck" three years ago, she told him how much she loved him as Doug Ross, even after I told her not to bring up his TV career. But Clooney, the mensch, hugged her and said, "I love it when fans remember my early work!" I will always love him.)

So with all the great years that "ER" gave my daughter and me, as well as all the old talent they got to show up in this final season to lure fans like us back, how could I resist tuning in? Most of the golden-year cast members returned, at least for brief cameos: Clooney and his "ER" love Julianna Margulies (Nurse Hathaway), Eriq La Salle (Dr. Benton) and Alex Kingston (his one-time lover Dr. Corday), Maura Tierney (the beloved Abby) and Laura Innes (the confused and maybe stereotypical closeted then out lesbian Dr. Weaver). Plus, the adorable Noah Wyle came back to play the tragic, kidney-lacking Darfur-veteran Dr. John Carter for half the season. Even the beloved (if dead) Dr. Mark Greene showed up, not as a ghost but via alleged "flashbacks" to an old story that had never run before, featuring this year's star Angela Bassett, ER head Dr. Cate Banfield, as a mom with a sick son treated by Dr. Greene for leukemia. (The little boy died, setting up this season's story about whether Banfield wanted another child.)

As the finale season lurched along through poorly written, barely plausible plotlines enlivened by return visits from old stars, I kept wondering: Could "ER" have put together a good season this year if they'd attempted to run a real series without disruptive cameos? I wish they'd tried. I love Angela Bassett, and she was great in the 5- or 10-minute segments when she was in a real storyline, not something built around the sudden appearance of old newcomers. She deserved better. Returning this season, I found most of the acting still appealing -- not just Bassett's but also that of her real-life and "ER" husband Courtney Vance, Scott Grimes (Archie) and David Lyons (Simon). I never fully warned up to John Stamos as Dr. Tony Gates, he always felt like the poor girl's George Clooney, but he grew on me.

The problem was flabby, aimless writing. And in the finale that was particularly clear: Sure we had trademark "ER" storylines: Testicular pain. Projectile vomiting. A fractured penis. Criminally negligent parents. Some kind of putty (in place of Viagra) to stiffen a penis. A kid who swallowed Abuelita's rosary beads. I think there was something else about a penis. The main event was the reunion of old cast members to dedicate the Carter Center, Dr. Carter's state-of-the-art medical clinic built with his family's megabucks in memory of late son Joshua (with his now-estranged wife Kem, a plotline I admit I was barely aware of).

It would have been fine to build a cogent, poignant, dramatic finale around the old characters -- there's still a spark between Benton and Corday, isn't there? Why can't Carter and Kem reconcile? -- but they didn't bother to do that. And they also didn't bother to write a quirky last night-at-the-ER special that would do justice to the kinds of screwball stories as well as heart-rending vignettes that people used to watch the show for.

The lack of tied-up storylines, and of maudlin tragedies that delivered an emotional punch, ironically made me appreciate what I loved about "ER" back in the day: People died on the show all the time, and death was handled impressively. Sometimes with lessons, often not, but treated as a painful, inevitable part of life. I never kept track, but there were a surprising number of losses -- patients dying as well as relationships failing; there were lots of laughs, but not many enduring happy endings. The searing deaths stay with me -- the young intern Lucy, murdered by a schizophrenic ER patient; or Dr. Greene himself, saying goodbye to his angry daughter, Rachel (who returned Thursday night as a college student applying to study at the ER; hokey, maybe, but sweet).

On this finale night a young mother of five died in childbirth delivering twins, but telling us about her death was an afterthought. The death we did see, the elderly wife of elderly Ernest Borgnine, after 72 years together, packed little real pain because, well, it just seemed like it was time. "Is that it?" Borgnine asks John Stamos as his wife fades away. I'd have asked Stamos the same thing about the finale if he were here, attending to the show's demise. It was time to go, for Borgnine's fictional wife, God bless her, and for "ER."