Rx for the economy: Which doctor should we believe?

Diagnoses range from a short-term sickness due to lax regulation to long-term ills caused by income inequality. Better hope the doctor who says it's just a sore throat is right. 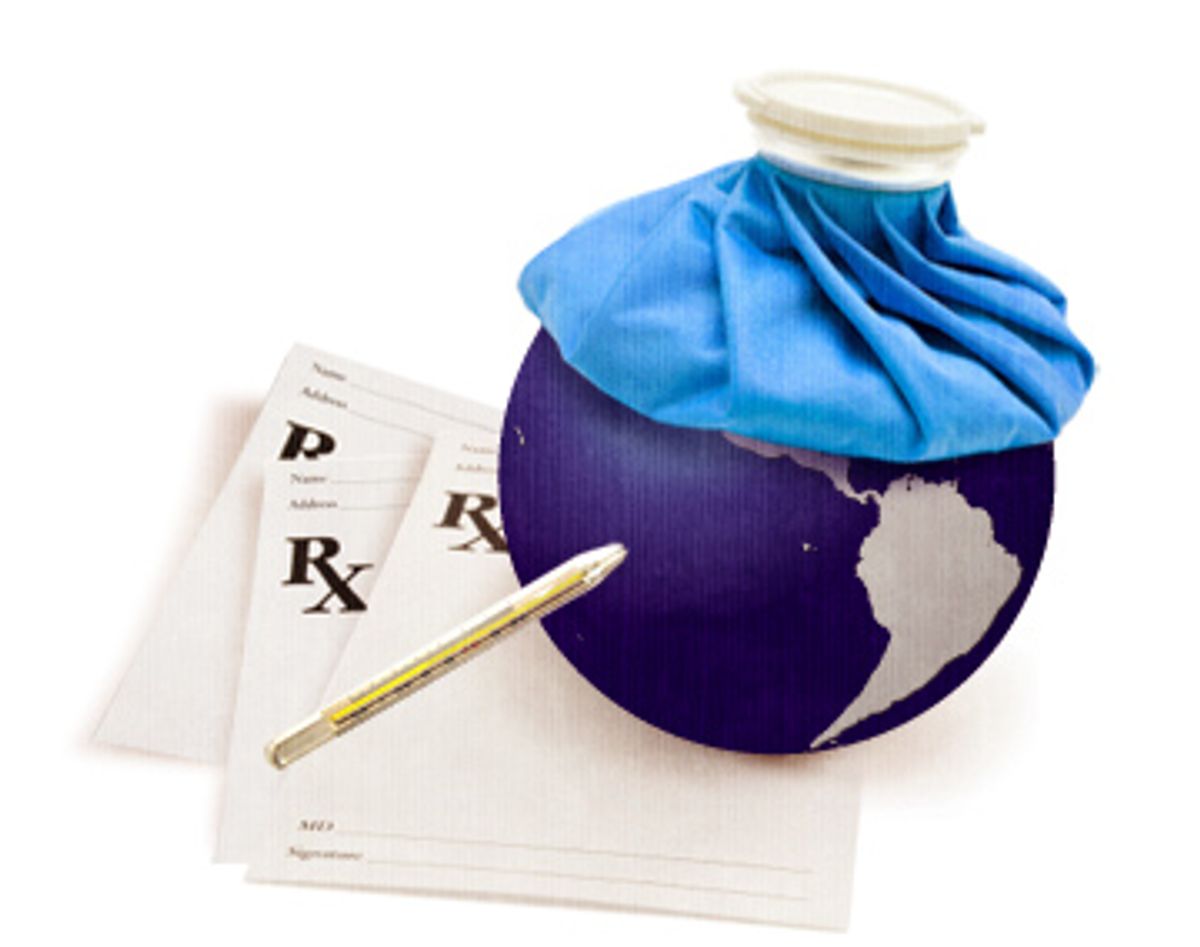 If the debate over the global economic crisis seems confusing, it's because the debate is confusing. Proponents of different cures can't even agree on the diagnosis of the disease.

Imagine a patient with a sore throat who visits three doctors. The first doctor tells her she is suffering only from a cold and prescribes aspirin. The second doctor says that the sore throat is a symptom of pneumonia, and prescribes antibiotics. The third doctor tells the patient that indeed she has a sore throat and that indeed it is caused by pneumonia, but the patient also must deal with the fact that she is an alcoholic. Her alcoholism has weakened her immune system, rendering her vulnerable to opportunistic infections like pneumonia. The third doctor prescribes aspirin for the sore throat and antibiotics for the pneumonia -- and also prescribes a 12-step program for overcoming alcohol addiction.

In the case of today's economic emergency, the first doctor is the equivalent of those who treat the credit crisis caused by subprime mortgages as the problem, rather than as a symptom of an underlying disorder. According to this diagnosis, lax regulation is responsible for turning the U.S. housing bubble into the greatest global economic collapse since the Depression of the 1930s. Liberals tend to blame the panic on the deregulation of the financial system under Clinton and George W. Bush and a refusal by regulators to enforce the regulations that remained. Conservatives and libertarians tend to emphasize the culpability of Congress and both Clinton and Bush in trying to expand homeownership for the un-credit-worthy, particularly low-income members of minority groups. Both sides condemn regulators who allowed banks and other financial institutions to leverage their assets at a ratio of 30 or 40 to 1. On the basis of this diagnosis, the cure for a crisis caused by inadequate regulation and enforcement is new regulations and tougher enforcement.

All that is fine as far as it goes, says Economy Doctor No. 2. But it does not go far enough. It does not address the patient's underlying problem (the patient's "pneumonia"). It neglects the connection between the financial crisis and global trade imbalances, and how those imbalances were created by American binging and Asian abstemiousness.

According to analysts as diverse as Federal Reserve Chairman Ben Bernanke, Financial Times columnist Martin Wolf, New York Times columnist Paul Krugman, and analysts Sherle Schwenninger and Michael Pettis, the bubble economy of the past generation resulted from the toxic interaction of Asian oversaving and American overborrowing. Since the 1970s, the U.S. has run a chronic trade deficit with Asian export economies, of which the most important have been Japan and China. As Americans splurged on Japanese and more recently Chinese imports, dollars flowed out of the U.S. In a world of falling exchange rates, the result should have been the appreciation of the currencies of Japan and China and the decline of the dollar. Result: Japanese and Chinese imports would have become more expensive for the U.S. consumer, while American exports would have become cheaper for Asian consumers. In a world of floating exchange rates, Asian-U.S. trade would have returned to something like balance, and U.S. interest rates would have been higher, popping the housing bubble at an early stage of inflation.

But this didn't happen. To protect their export industries from becoming less competitive as a result of an increase in their currencies relative to the dollar, Japan and China bought dollar-denominated assets, most notably U.S. Treasury bonds. This in turn lowered interest rates in the U.S., making it easy for affluent speculators and strapped consumers alike to go on a credit-fueled real-estate purchasing spree that came to an end only last September. China and Japan also depressed domestic consumption and wages in order to steer more investment into export-oriented manufacturing.

According to the second diagnosis, then, the underlying cause of the crisis was what Ben Bernanke described as a global savings glut. American consumers could have tried to go on a borrowing spree, but they would not have gotten very far but for low interest rates. The Federal Reserve might have wanted to lower interest rates, but might not have had as much success unless it had found Asian governments flush with excess savings that were willing to buy U.S. debt, as part of currency manipulation strategies designed to help their export industries. The point is not to "bash China" nor to excuse debt-intoxicated Americans living champagne lives on beer budgets. The point, rather, is that when you have a drug habit, it's easier to satisfy it when the pusher is lending you the money.

This third diagnosis is held by structural Keynesians, or post-Keynesians, a broad school that includes Robert Reich, Thomas Palley and James K. Galbraith, among others (who might or might not agree with my description). Structural Keynesianism has affinities with the "underconsumptionist" tradition of economic thought, a tradition that includes 19th-century thinkers like Malthus and Sismondi and New Deal Democrats like Rexford Tugwell. The underconsumptionist tradition holds that capitalism is inherently unstable, with chronic tendencies to overproduction, underconsumption and recession- or depression-inducing gluts of commodities or manufactured goods.

The basic idea is simple: Rich people have a lower propensity to consume (the term was coined by Keynes) than middle-class and low-income people. It follows that if the gains from productivity growth go to workers, they are more likely to spend the money, stimulating further investment and further growth. But if the gains from productivity growth disproportionately go to the rich, they are less likely to spend the money on mass-produced goods and services than they are to save the money or use it to speculate in assets. The result? Either the economy chokes (too much savings) or explodes (asset bubbles). The underconsumptionist theory is the opposite of trickle-down economics. If it is right, then shifting shares of national income from the majority to the rich minority, far from leading to investment and growth, is likely to lead to speculation and bubbles.

While they hold obvious appeal for liberals and populists, underconsumptionist theories have generally had a disreputable odor of crankiness, particularly in the last generation, when many Democrats as well as Republicans shared a belief in the efficiency and self-correcting nature of free markets. But the underconsumptionists can point to the striking parallels between the 1920s and the crash that followed and the 1990s/2000s and the crash that followed. In both the 1920s and 1990s/2000s productivity both in the U.S. and the world as a whole surged while wages stagnated in an anti-union political climate. In both periods the rich used their increased share of income in part to engage in heroic speculation in assets -- the stock market and Florida real estate in the 1920s, and in recent years ... well, the stock market and Florida real estate. Meanwhile, in both eras middle-class and working-class consumers seeing few or no wage gains turned to debt to finance their consumption, while many of the rich went on their own borrowing and spending sprees, until defaults in one part of the system triggered cascading national and global collapses.

Like the diagnosis of the third doctor in my original example, the diagnosis of Economy Doctor 3 includes, but is not limited to, the diagnoses of the other two physicians. Yes, there is a need for sound regulation -- but that is not sufficient, without a rebalancing of the global economy -- and rebalancing is not enough, unless both American and Chinese workers share more of the gains from growth in their paychecks. In particular, underconsumption in China and other East Asian economies is a global problem not just a domestic one. Americans with higher wages will have less of a need to borrow in order to consume, which is just as well, because if Chinese wages and consumption rise, there will be less excess savings in the system to enable low interest rates for borrowers in the U.S.

The good news is that we have sorted out the three diagnoses. The bad news is that most of the industrial nations, and half of the American political class (the right) is listening only to Doctor No. 1.

The consensus among Republicans and perhaps some "conservaDems" is that the crisis arose from bad regulation, particularly from pressures on Fannie Mae and Freddie Mac to lend money to bad credit risks among low-income Americans. End of story. No need to reconsider trade policy, and certainly no need to think about the distribution of income in the U.S. or elsewhere.

For once, the Europeans and Asians agree with America's Republican Party. The European consensus seems to be that foreigners are the innocent victims of bad American regulatory policies. The emphasis of the major European nations, particularly Germany and France, at the recent G-20 meeting, was entirely on new international and national regulations of finance.

For its part, the government of America's codependent China has tended to treat any discussion of its currency strategy and the priority it gives to export industries over domestic consumption as attempts by irresponsible Americans to make China the scapegoat for the lack of thrift on the part of American consumers. (Never mind that China's export-oriented growth has depended on a lack of thrift on the part of American consumers.) And while discussion of unbalanced patterns in trade as contributing factors in the bubble economy is considered controversial in Europe and Asia, the discussion of the roots of those imbalances in domestic patterns of income distribution is completely off the agenda.

The second and third diagnoses have been ignored by most industrial nations in Europe and Asia. We had better hope that the first physician is right: the world economy's sore throat is nothing more than a sore throat and aspirin in the form of more financial regulation will be sufficient as a cure. Otherwise the patient is in serious trouble.