Hail to the chief

Watching Obama swarmed by happy soldiers in Iraq, I wondered if Glenn Beck might ratchet back his hateful rhetoric. Nah. 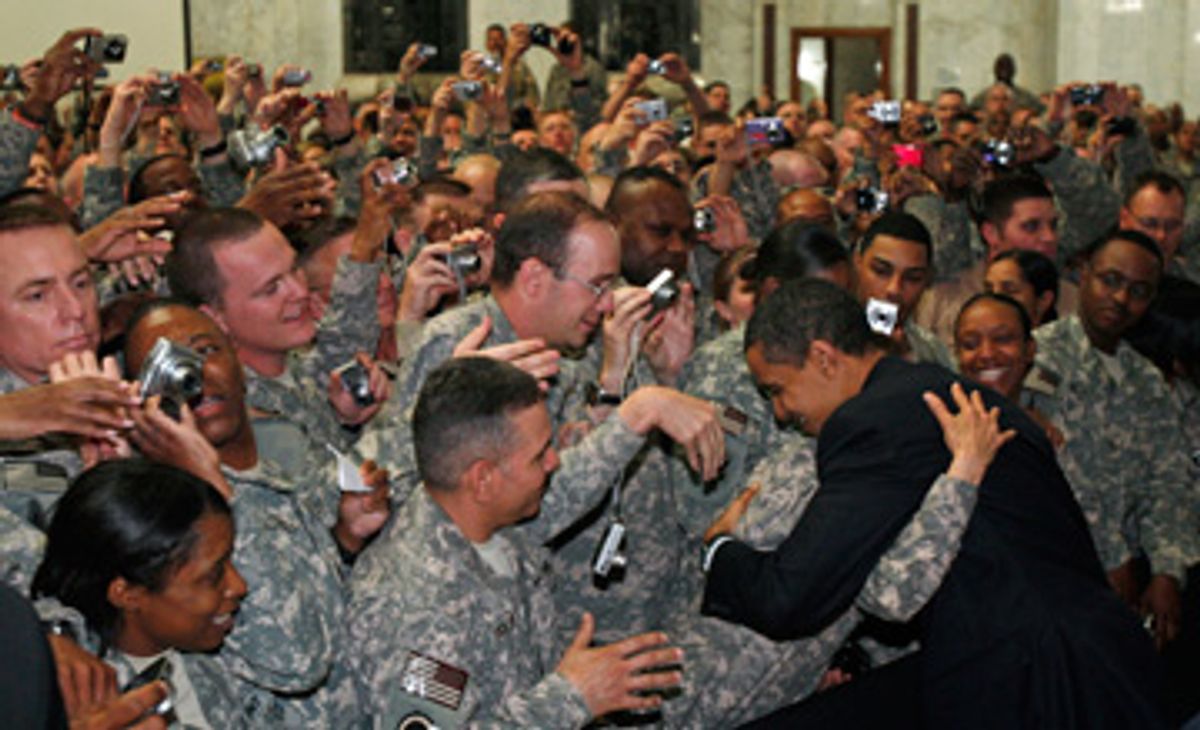 I found it incredibly moving to watch the first grainy video footage of President Obama being mobbed by delirious American soldiers during his surprise visit to Baghdad on Tuesday. They crowded him joyously, some of them jumping up and down, stereotypical gruff-looking gray-haired white guys just beaming at the president, women and men alike leaning in for hugs. Obama bodyman Reggie Love rushed forward with a pen for autographs.

It was hard not to notice that the African-American troops looked particularly ecstatic, but every time I concluded that, I saw a white soldier beside him- or herself with joy. It was an equal opportunity love fest. It reminded me of seeing the Tuskegee Airmen on Inauguration Day; everyone in the crowd was thrilled, but their joy, given our history, was particularly infectious. Obama himself looked completely happy, managing to pause and chat with more soldiers in just a few minutes than you would ever imagine possible. The word "poise" seems inadequate to describe his capacity to impart real meaning to fleeting moments.

According to AP's Jennifer Loven, speaking by phone to MSNBC a little while ago, Obama got his biggest applause when he told the crowd, "It's time for Iraq to take responsibility for itself." Not surprisingly, they know Obama's right when he says it's time to accelerate political reconciliation and draw down combat troops. He also promised, "As long as I'm in office, you'll have the support you need." It's worth noting that I remember Sen. Obama, in early 2005, being among the first politicians to take note of Mark Benjamin's reporting on poor conditions at Walter Reed (serendipitously, Benjamin and Michael de Yoanna have another installment of their "Coming Home" series, on mistreatment of veterans returning from Iraq, going up tonight. Please watch for it.)

I'm not going to pretend that photo ops with happy soldiers equal a resolution to the Iraq war, let alone to the impending escalation in Afghanistan. (A car bomb went off in Baghdad today, killing Iraqis in a Shiite neighborhood.) But it's also wrong to ignore -- let alone belittle, as the right does – the power of Obama's personal charisma and the symbolism of his leadership in a time of domestic and global crisis. Over and over during his trip abroad, I found myself enormously proud of his capacity to touch people and to inspire them, worldwide. To see Obama's personal rapport with the men and women who are fighting and dying for our country would almost have to be moving, no matter your ideology. Of course for Democrats, given the way the party has suffered from the perception that it's somehow anti-military, largely because of its correct opposition to the Vietnam War (after it was, of course, escalated by Democrats), the scene had special meaning.

I wonder if it will give Republicans pause when they're inclined to slur Obama as "anti-American," and worse. Will it make Glenn Beck and the rest of his militia media ratchet down the rhetoric fomenting insurrection against the "fascist" in the White House? Probably just the opposite. But they are preaching to a scared but shrinking choir. I still have doubts about Tim Geithner and Lawrence Summers' ability to solve the banking crisis. I'm very concerned about the Justice Department's apparent moves to continue Bush-Cheney secrecy on torture and interrogation. Scenes of joyous soldiers don't completely make me confident that the Obama administration will do the right thing on every front. But it's a fine thing to watch the president inspire the whole country, not just shards of it.