Seth Rogen plays a deranged mall security guard in this twisted comedy that pushes the envelope so forcefully it practically squeals like a pig. 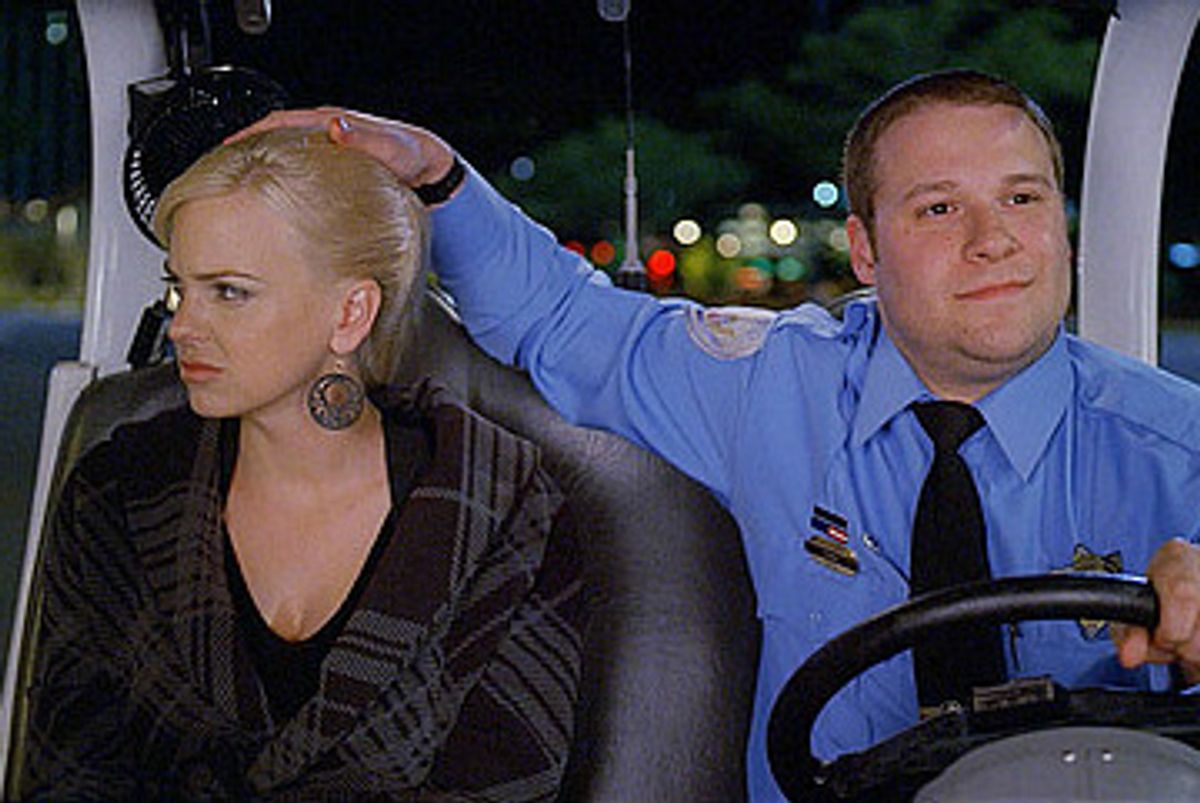 Supposedly, a cult comedy is something that just happens, a strange little phenomenon that audiences find on their own and take a shine to. But is it the kind of thing a filmmaker can set out to make? Jody Hill's "Observe and Report" is a cult-comedy hopeful that may as well have been made from an instruction manual: Its rhythms are off-kilter all right, as if they'd been programmed into a drum machine; its characters are treated with condescension and derision -- we're supposed to laugh at them even as we count ourselves lucky that we don't have to be them; and it's set in a shopping-mall universe that's semi-realistic at the beginning and woozily surreal by the end, a place where actions have no consequences and thus no meaning. The whole thing is calibrated to wow us with its weirdness, even as it assumes an air of "Who, me?" guilelessness. I've seen slick, glossy Hollywood thrillers made with less knowing calculation.

"Observe and Report" follows the misadventures of bipolar mall security guard Ronnie Barnhardt (Seth Rogen), a self-important, confused loser who yearns to be allowed to carry firearms on the job so he can, you know, shoot people. When the department-store makeup girl he has a crush on, Brandi (Anna Faris), is victimized by a flasher who's been showing off his privates to female mallgoers, Ronnie gets the bright idea of joining the police force: He's motivated by the fact that Brandi seems to be awfully dazzled by the snarly detective (played by Ray Liotta) who shows up to question her after the flashing incident. The other characters in Ronnie's extremely circumscribed world include a fellow security guard with a lisp (and a dark side) played by Michael Peña; a perky, adorable Christian-in-a-wheelchair (Collette Wolfe) who toils away at a mall fast-food joint and who clearly has a crush on Ronnie, although he's so rude to her it's hard to figure out why; and his alcoholic mom, played by Celia Weston. (When she passes out on the floor at night, Ronnie tenderly covers her with a blanket instead of doing the stereotypical, bourgeois thing of helping her off to bed -- that's the sort of daring humor "Observe and Report" trades in.)

"Observe and Report" is Hill's second feature; he also wrote and directed the 2006 comedy "The Foot Fist Way." It's possible Hill has a style, of sorts. But he doesn't work from the heart, or from the gut, as a good comedy director generally needs to. He operates from one guiding question: "How disturbing can we make this shit?" To that end, he pushes the envelope so forcefully that it practically squeals like a pig. After Ronnie coerces Brandi into going on a date with him, during which she consumes numerous cocktails and takes too many pills, he grinds away at her in bed as she lies still beneath him, seemingly unconscious, a trail of spit-up trickling down her pillow. He pauses briefly to make sure she's not comatose, and she momentarily perks up, urging him not to stop.

The intended point of hilarity here must be that what Ronnie is doing is almost date rape, but phew! not quite. Brandi knows what he's doing, and she's OK with it -- because she's really just sort of a sleazy girl to begin with, right? Even if you just write the gag off as a sick joke, it's no fun to see Anna Faris used this way. Dressed in tiny, tight dresses and cheap high heels, Faris' character toddles through the movie with a sour, self-satisfied scowl. The idea may be that Brandi's no nicer -- or no better -- than Ronnie is, so why not score jokes off her? But anyone who's seen Faris work her bubbleheaded genius in "The House Bunny" -- which really is a subversive comedy -- and believes this is a good use of her talents shouldn't be going to the movies, let alone making them. Maybe Hill really is as dim, and as boorish, as his lead character is.

Hill sometimes pretends to care for his characters. At the beginning, we know there's something not quite right about Ronnie, but we still think there might be some sweetness inside the guy fighting to get out: That's partly because Rogen is the guy playing him, and in movies like "Knocked Up" and "Zack and Miri Make a Porno," Rogen has already proven to be a friendly, likable presence, a brand name we can trust. But Ronnie, when he's off his meds, is rude, piggish and displays violent tendencies; to suggest all of that, Rogen wanders through the movie looking befuddled and slightly cross-eyed. It's not a performance, just an approximation of a series of negative qualities.

My hunch is that the people who respond to "Observe and Report" will use words like "risky" and "dark" to describe it. Hill is no dummy: He's playing straight into the audience's desire to be seen as cool and sophisticated. But he's really just pandering to that audience -- he's not asking anything more of them than to bow down before his bleak, twisted vision. Toward the end of the picture -- around the time it erupts into cartoony performance-art violence -- a cover of an old Pixies' song, attributed to a band called City Wolf, drifts onto the soundtrack. It asks the question, "Where Is My Mind?" and I'm afraid I know the answer: I lost it at the movies.