Symptoms of the conservative crack-up were on full display after President Obama's trip abroad. Bill Kristol, take a bow. 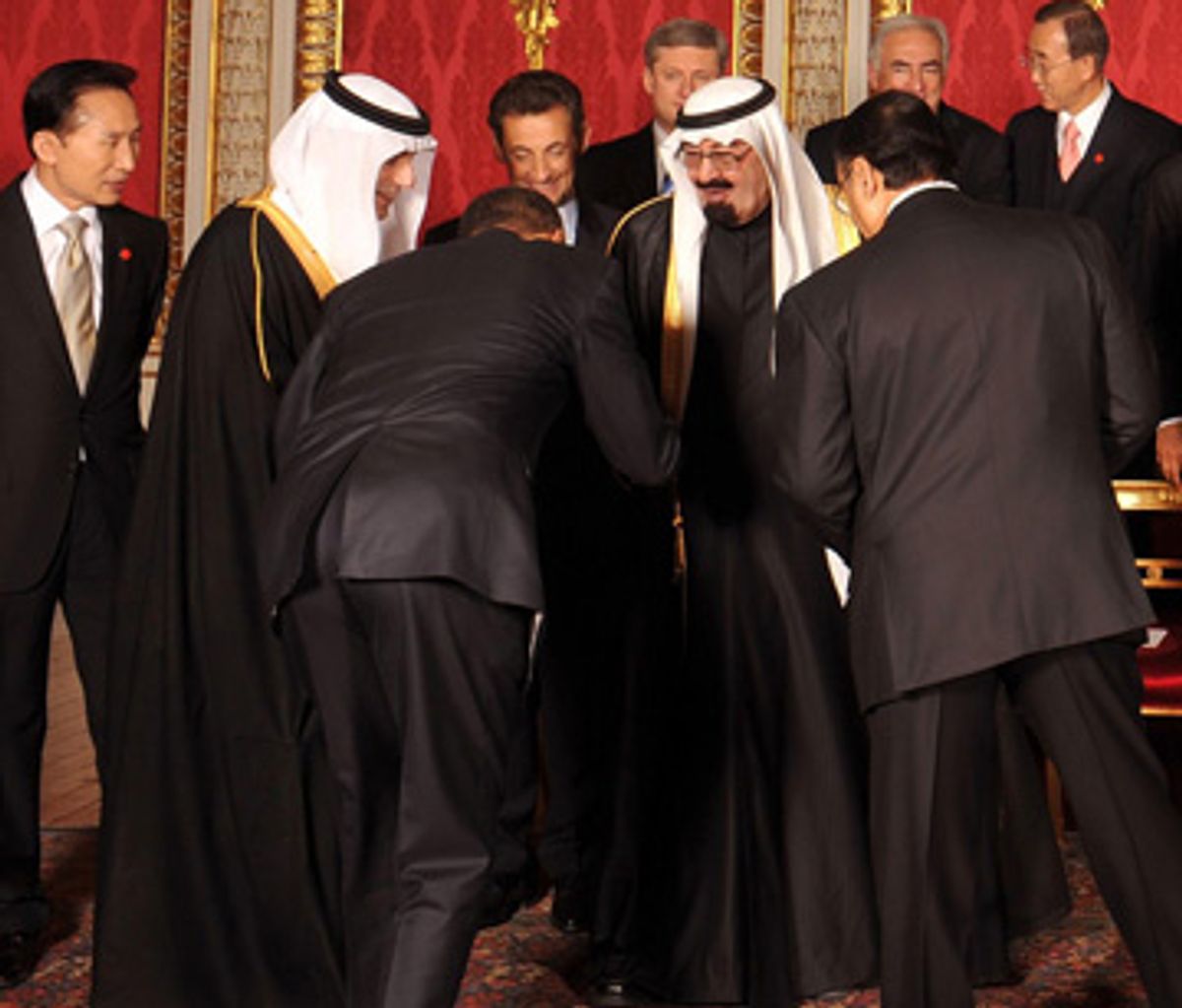 President Obama's recent trip to Europe, Turkey and Iraq was a fairly bland freshman outing in foreign affairs, notable for the enormous good will it generated toward the U.S., along with some practical achievements and a few minor errors. It lacked the drama of the untested young Kennedy grappling over Berlin with the wily old Khrushchev in Vienna in 1961. On the American right, however, Obama's trip produced a hysteria not seen since radio listeners mistook Orson Welles's 1938 radio production about an invasion from Mars for the real thing, and crowded the highways, heads wrapped in wet towels, to escape the poisonous miasma of the onrushing aliens. The weeping and trembling of Sean Hannity, Karl Rove, Rush Limbaugh and William Kristol underlined once again that the right-wingers are playground crybabies who kick and scream and faint whenever they do not get their way.

The outrage began when Obama greeted Saudi King Abdullah by leaning into a double-handed handshake. Sean Hannity at Fox Cable News sputtered, "We got this video of Barack Obama bowing to the Saudi King Abdullah. Now look, watch how low he gets. Way below the shoulder." Camille Paglia denounced from her own little papier-mâché Mount Olympus "the jaw-dropping spectacle of a president of the United States bowing to the king of Saudi Arabia." The critics missed the point; far from being obsequious, Obama's double-barreled handshake violated the protocol for greeting royals. When singer Kylie Minogue similarly clutched Prince Charles' hand, the London tabloid press noted it as a faux pas that only a celebrity could get away with. But in any case surely George W. Bush's sycophantic cheek-kissing and hand-holding of Abdullah was far more offensive to the political right? Apparently not. Rep. Michele Bachmann, R-Minn., called the greeting "shameful." She also darkly warned, "We're still finding out what happened during that G20 summit. I think that there may have been agreements made behind closed doors that we aren't even aware of, that could be ceding American sovereignty."

Most conservatives had little trouble with the part of Obama's address to the Turkish parliament in which he declared that the U.S. is not at war with Islam. Those conservatives only wanted to emphasize that George W. Bush had said the same thing. But there were notable, clownish exceptions.

Radio personality Rush Limbaugh challenged the president, saying that if we are not at war with Islam then the Somali pirates must not be Muslims. Perhaps, the rotund one suggested with his world-famed gift for subtle wit, the Somalis are actually Orthodox Jews. But Obama had explicitly said that the U.S. is at war with some Muslims, to wit, al-Qaida, and had merely exempted the broad religion of Islam as an object of enmity. When the U.S. went to war against the Serbians over Kosovo, it was presumably not involved in a war on Christianity, even though the Serbs are Eastern Orthodox Christians. Moreover, Islamic law forbids piracy, so the Somalis are not acting out of religious motives. The fevered irrationality of such diatribes, on the part of someone recognized as the leading voice of the contemporary Republican Party, points to the party's dire intellectual straits.

Obama's address to the Turkish parliament also managed to enrage Weekly Standard editor William Kristol, who blew a chance to prove wrong the adage that he is always wrong about everything. He complained to Brett Baier of Fox News on April 6, "Look ... We have defended Muslim nations against terrorists. It would have been nice if President Obama could have said a word about the young Americans who went to Afghanistan ... and ... Iraq. But could Barack Obama say something that would be mildly unpopular to an audience [to] which he was speaking? No."

Somehow Kristol seems to have missed the part of Obama's speech where he emphasized that Turkey and America were fighting a common enemy, side by side, in Afghanistan. "Finally," said the president, "we share the common goal of denying al-Qaida a safe haven in Pakistan or Afghanistan ... Turkey has been a true partner. Your troops were among the first in the International Security Assistance Force. You have sacrificed much in this endeavor. Now we must achieve our goals together." In other words, Obama said precisely what Kristol alleged that he did not. Kristol, the mighty Casey of right-wing punditry, struck out yet again, for a lifetime batting average of .000.

That in the same speech Obama praised Turkey's modern founder, Mustafa Kemal Ataturk, and that country's "strong, vibrant, secular democracy," irked unemployed theocrat Karl Rove. Rove complained that Obama had declared that the U.S. is not a Christian nation and had sympathized with Turkey's separation of religion and state. The notorious betrayer of CIA agents opined to Sean Hannity on April 8, "Yes, look, America is a nation built on faith. I mean we can be Christian, we can be Jew, we can be a Mormon, we can be -- you know, any variety of things ... And to somehow go to Turkey and in order to sort of identify yourself with this Turkish secular movement that began in the early part of the previous century and try and somehow make Turkey and America equivalent is to deny each nation's reality." Like Kristol, Rove apparently didn't bother to read or listen to Obama's remarks in full before criticizing them. In the speech, Obama urged greater acceptance of religion in public life in Turkey and the reopening of the Eastern Orthodox Halki seminary.

Rove also forgot to coordinate with neoconservative Washington Post columnist Charles Krauthammer, who told Baier on the 6th, "I think he did all right in his speech to the parliament in Turkey. I thought there was an overemphasis in the second half on how it's a Muslim nation. But in the first half ... he stressed the fact that it's a secular democracy. And I thought that was a good approach." This clash of interpretation showed up the fissures in what is left of conservatism, between the proponents of Christian Reconstructionism (religious rule) and the generally secular neoconservatives. What it does not do is damage Barack Obama, who obviously managed to navigate the minefields of secularism versus religion, both in the Turkish and the American context.

Aside from complaining that their pleas for Christian state-making have been ignored by the president, conservatives were reduced to alleging that Obama was just doing and saying all the same things as W. had, but was getting more credit for it. Some even seemed to hope for redemption through apocalypse, since they kept coming up empty in their histrionics. Bill O'Reilly said on April 6, "there's no question ... that the Islamic world likes Barack Obama better than President Bush. OK, fine ... But before it's all over, they may hate Barack Obama ... We get hit again, Barack Obama's going to have to wipe out a few countries. OK?" Of course, it is not actually true that replying to a strike by a small asymmetrical terrorist organization would require wiping out whole countries, nor even that it would require enmity between the U.S. and the broad Muslim world. And if the possibility of such an attack is all Republicans have left to cling to, it is a sad state of affairs.

More hot air was vented on the right in making elementary errors of logic, and more verbiage spent condemning the bow to King Abdullah, than in discussing any of the meatier issues broached during Obama's trip abroad. The ever greater concentration on minutiae, and the investment of more and more passion in matters of no moment, signals the bankruptcy of conservative philosophy. Its proponents have stared transfixed as the ruthless implementation of their most cherished principles produced a series of economic, social and foreign policy calamities from which it may take decades to recover. The spectacle of their spokesmen misunderstanding English, hyperventilating over dark suspicions of surrender of sovereignty or reeducation camps, condemning a Muslim country like Turkey for setting a bad example by being insufficiently theocratic, and engaging in mock auto-da-fes to illustrate their inner rage, raises the question of whether the Republican Party is having a collective nervous breakdown. Meanwhile, Obama and the rest of the country have begun seeing "glimmers of hope."