Gay marriage in the Heartland

How same-sex unions triumphed in Iowa, and what other states can learn from the victory. 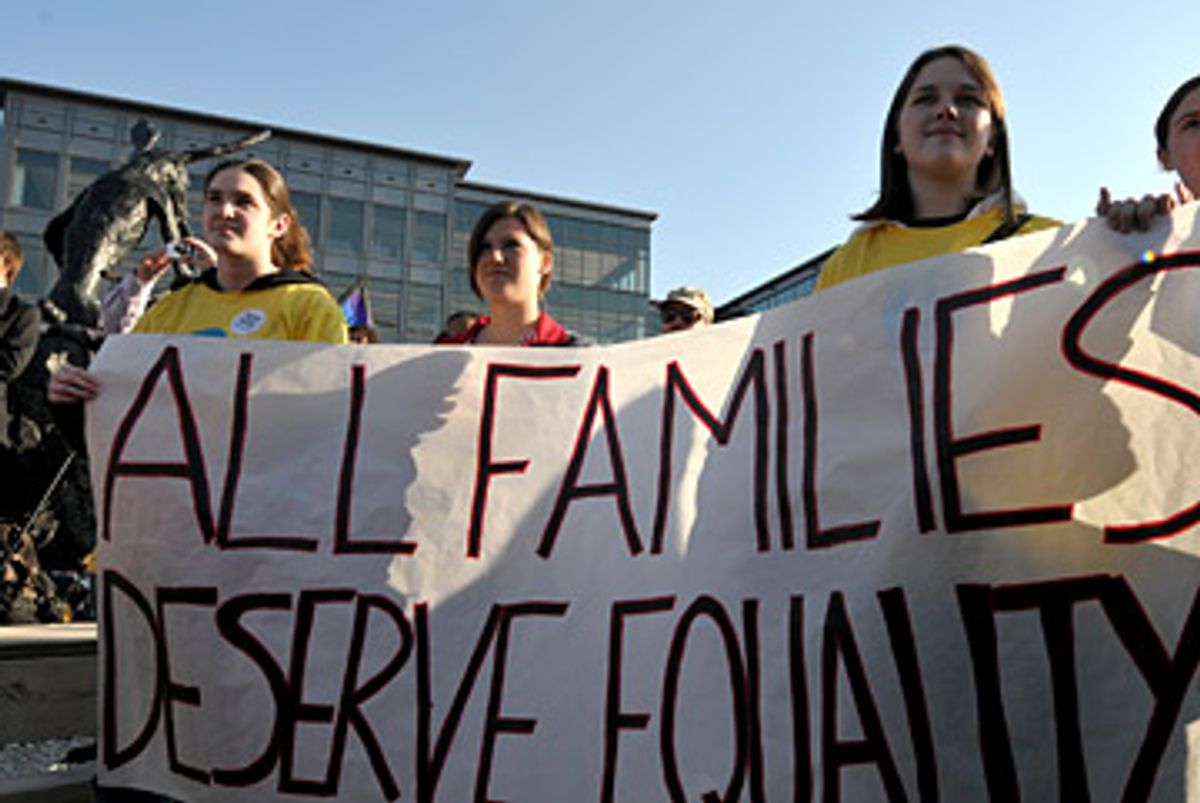 Iowa is known for its sweeping cornfields and pigs, fed by those vast amounts of corn. The landlocked state in the heartland isn't exactly recognized as cutting edge or socially progressive, though its presidential caucuses do tend to predict the outcome of presidential races, as they did most recently with the selection of Barack Obama.

But with its Supreme Court decision in Varnum v. Brien, making it the third state to legalize same-sex marriage, Iowa is shedding its image as cornfed conservative. After the decision was announced April 3, about 1,000 people rallied in Western Gateway Park in Des Moines to celebrate, and Iowans showed their personality by toting signs, like "Corn Fed and Ready to Wed," and even nodding to the coast: "This One's for You, California."

California, which at one time seemed destined to be the first state to legalize same-sex marriage, meanwhile awaits a decision from its Supreme Court on the validity of Proposition 8. The controversial ballot initiative, passed by a narrow margin in November, outlawed same-sex marriage, which had just been legalized via a California Supreme Court decision the previous May.

In fact, in the space of five days this month, the number of states where gays and lesbians can legally wed doubled, when Vermont and Iowa joined trendsetters Massachusetts and Connecticut. Vermont's approval of same-sex marriage on April 7 was not surprising. After all, Vermont pioneered civil unions in the U.S. in 2000.

Vermonters have had nine years to observe that allowing gays and lesbians to enter into legally binding partnerships did not herald the end of the world. Fire and brimstone didn't rain down on the land, plagues didn't smite their iconic maple trees and most important of all, children in these nontraditional families were just as well-adjusted as their peers with straight parents.

The paths to legalizing same-sex marriage are quite different in Iowa, Vermont and California. Iowa, like Massachusetts in 2004 and Connecticut in 2008, relied on Supreme Court decisions to change the law. Vermont's law, on the other hand, was voted in by the state Senate and House of Representatives, promptly vetoed by Gov. Jim Douglas, and then overridden by the Vermont Legislature. At first glance, the Iowa Supreme Court's vote may appear surprising, especially to the-world-revolves-around-me Californians, but Iowa has an impressive history of pioneering civil rights legislation.

Iowa abolished slavery in 1839, 26 years before the passage of the 13th amendment in 1865. Iowa disallowed separate but equal racial segregation in schools in 1868, 85 years before the U.S. Supreme Court's decision in Brown v. Board of education outlawed it nationally. And in 1873, Iowa again protected racial minorities, extending anti-discrimination to public accommodations, 91 years before the U.S. Supreme Court. Iowa was also the first state to allow women to practice law. "I think Iowa's tradition played a big role in the victory," said Camilla Taylor, lead counsel for Lambda Legal, which represented the couples seeking to marry in Iowa.

It's a good thing that laws aren't always left to the people. In Iowa, if the amendment had been put to a popular vote, as it was in California, it probably would not have passed. According to a University of Iowa Hawkeye telephone poll just before the Iowa Supreme Court vote, 26.2 percent of respondents said they supported gay marriage, and 27.9 percent opposed marriage but supported civil unions, while 36.7 percent opposed both. However, the younger voters were more accepting. Talk about a generational divide -- among voters under 30, 60 percent supported gay marriage, and 75 percent supported formal recognition of gay relationships.

California's position on marriage equality has lobbed back and forth. It has been defined through popular vote (2000's Proposition 22, which defined marriage as a contract between a man and a woman), a maverick decision (San Francisco mayor Gavin Newsom's short-lived permission in 2004 for gays and lesbians to marry) and a Supreme Court decision annulling those marriages. And that was just the beginning; in 2008, a Supreme Court decision reversed Proposition 22 and allowed same-sex marriages again. Then came another popular vote -- Proposition 8, which reversed the Supreme Court ruling and left about 18,000 couples who wed between May and November of last year to wonder if their marriages are valid.

Despite California's reputation as freethinking and liberal -- it was the first state to recognize domestic partnerships in 1999 -- it has its own conservative heartland, the Central Valley, and Republican enclaves like Orange County that tarnish that reputation. Public opinion is divided -- some polls show the majority opposing same-sex marriage, while others show the opposite. But polls in Iowa, California and Vermont show that among the younger voters, the majority favor marriage equality. All three states have this in common: They have a history of being on the forefront of civil liberties legislation.

California was the first state to dismantle anti-miscegenation laws in 1948 with Perez v. Sharp, 19 years before the U.S. Supreme Court outlawed it in Loving v. Virginia -- a very unpopular ruling at the time. The first Gallup poll on the subject, ten years after California's landmark decision, revealed an astonishing 94 percent of Americans still opposed interracial marriage. Even ten years later, after the federal decision, 72 percent opposed it, according to Marriage Equality USA. Vermont never enacted anti-miscegenation laws, and was the first to abolish slavery.

The decision in Loving v. Virginia relied on the concept of equal protection found in the U.S. Constitution and that of all 50 states. It calls marriage one of the "basic civil rights of man," and states that "to deny this fundamental freedom on so unsupportable a basis as the racial classifications embodied in these statutes, classifications so directly subversive of the principle of equality at the heart of the Fourteenth Amendment, is surely to deprive all the State's citizens of liberty without due process of law."

Supporters of same-sex marriage believe it is a civil rights issue, and hope that the courts will enforce existing laws. "It's not that we need a new constitution," said Evan Wolfson, executive director of Freedom to Marry. "We just need a renewed commitment. Properly enforced, the existing equal protection would require equality." So what worked in Iowa and Vermont? Activists and legislators made the issue personal, taking a cue from Harvey Milk, who advocated that people tell their stories.

One Iowa, an organization formed in 2006, just after Lambda Legal filed Varnum v. Brien, began holding forums across the state, in big cities and small towns, bringing together same-sex couples, legal scholars and people of faith to talk about the importance of marriage equality. Justin Uebelhor, communications director for One Iowa, said the group recognized the need to build support for marriage equality.

"We needed those folks to contact their elected officials," he said, which they did, both before and after the vote. Lambda attorneys used a new strategy when they filed the case in Iowa: They included children of the couples as plaintiffs. They also called psychologists. "We took a lot of care in making as complete a record as possible of the social science of gay and lesbian parenting," Taylor said. In light of the New York court's 2006 decision against same-sex marriage that relied in part on "intuition" that children would be better off with a mother and a father (how many families lack one of those?), Lambda included statements from child development and other experts to make the case that children of gay and lesbian parents are just as well-adjusted as children of heterosexual parents.

This strategy to make things personal appears to be helping. The National Organization for Marriage launched a $1.5 million advertising campaign that included broadcasting the fear-mongering "The Gathering Storm," which claims that same-sex marriage will infringe the rights of straight people. The video, denounced by gay rights activists, is intended to encourage Iowans to pass a law to dismantle the ruling.

When the embarrassing audition tapes showed up on YouTube, revealing that the people talking about their fear of the darkness were actors, NOM requested the video's removal. To undo the Supreme Court's ruling, Iowans would have to amend their constitution. So far, Iowans have not persuaded legislators to introduce a bill to negate same-sex marriage in the state. In order to change the state constitution, the Legislature must vote on the issue in two separate years. It appears unlikely that the current Legislature, which is about to end its 2008-2009 session, will vote on it, meaning that it could be changed by 2012 at the earliest.

Vermont activists, including an organization called Vermont Freedom to Marry, took a similar approach. "We had frank discussions with people: I am gay and I am your neighbor and I am your farmer and I want the same rights that you have," said Jason Lorber, an openly gay state representative from Burlington. "In California, I don't think those discussions took place." California has a population of 38 million. Vermont, at 600,000, is smaller than San Francisco.

Now, attention is turning back to California, where the state Supreme Court is expected to make a ruling by early June on whether Proposition 8 is valid. The California constitution can be changed in two ways: through amendments and revisions. The amendment process is designed for ordinary changes, and can be done through the Legislature or through a signature collection that leads to a vote of the people. "California has an unusually low threshold for changing the constitution," Wolfson said.

The California Supreme Court is currently deciding whether Proposition 8 was simply an amendment or a revision that should have gone through a more rigorous process. "It's hard to imagine anyone considering the idea of equal protection a mere amendment," Wolfson says. "Writing out the rights of a minority is a revision." And if it was a revision, it's invalid, Lambda's Taylor said. "We firmly believe it is a revision -- it redraws equal protection to permit the exclusion of some people from the guarantee of equality based on a simple majority vote." Yet in a hearing March 6, it appeared that some Supreme Court justices were hesitant to go against the will of the people. Their decision is expected by early June.

Adding to the momentum, this Thursday, New York's Gov. David Paterson plans to introduce legislation to legalize same-sex marriages in the state.  "We've got New Hampshire coming up for vote, New York and New Jersey. We've got momentum on our side, and we've got time on our side," Lorber said. "When you talk to youth, they just don’t even get what the controversy is all about."

Iowa's choices in recent presidential caucuses have made it a bellwether of sorts in presidential races -- hence the saying, "As Iowa goes, so goes the nation." The Iowa decision is important precisely because it's in the heartland, Taylor said. "It highlights for the nation that marriage equality across the country is inevitable. It's simply a matter of time and we still have some years to struggle, but we've turned the corner as a nation."

Jodi Mardesich is a writer and yoga teaching living in Cedar Hills, Utah. A former staff writer for Fortune and the San Jose Mercury News, her articles have appeared in the New York Times, Yoga Journal, The Advocate and Slate.