Are you loaded or shitfaced? Edumacated or frakked? A new book explores the poetic, ever-changing world of slang. 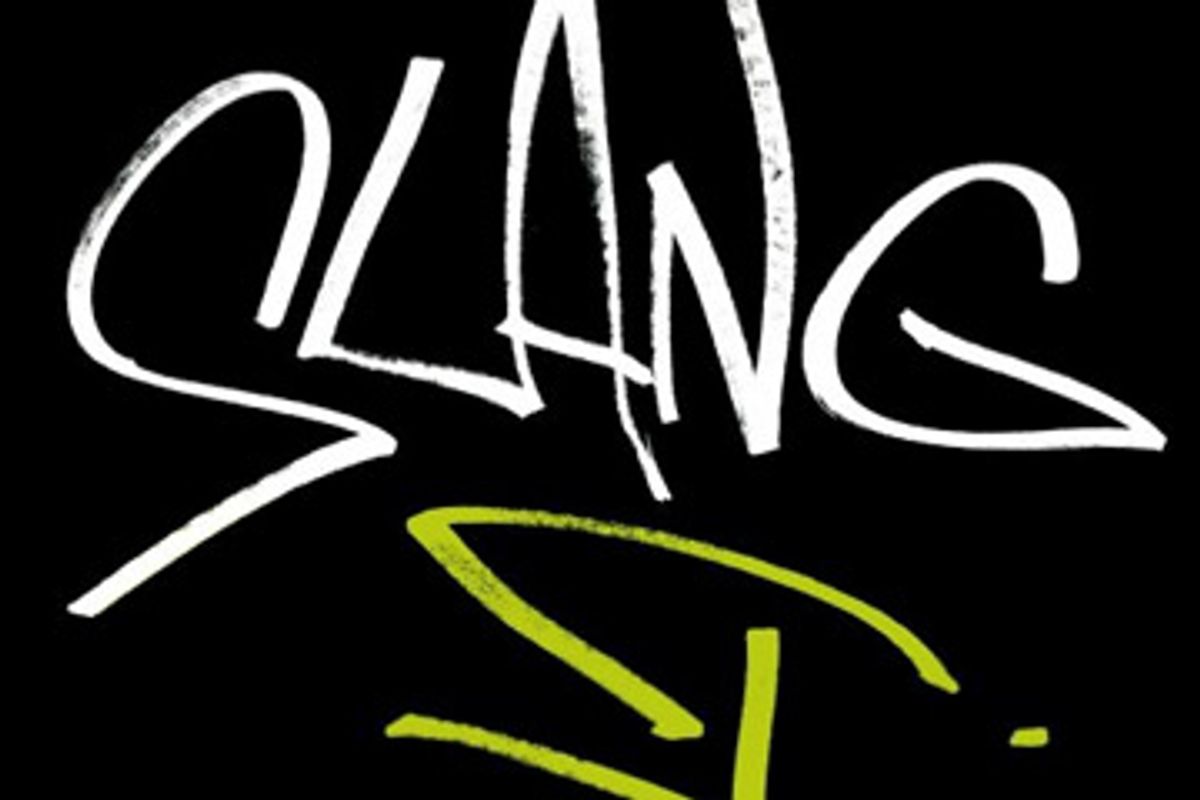 Slang is something most of us use every day without thinking, unless we avoid using it as a matter of principle -- which probably takes more conscious thought than using it does. "Slang is always with us," writes Michael Adams in his meticulous and shockingly readable "Slang: The People's Poetry." It is also, he concedes, a big subject, one that could probably fill twice the number of pages he uses (238, including footnotes and references).

That "Slang" is so slim, concise and lively is proof of Adams' commitment to the idea of language as something that's living, breathing and constantly changing. If you've even been trapped at a dinner party or a lecture (depending on the guests, sometimes they're indistinguishable), listening to an alleged person of letters use as many of them as possible to express how much he or she "loves words," you'll be grateful for Adams' concision. "Slang" is a gem that Adams has taken great care in cutting and polishing. Unlike so many academics -- Adams is an assistant professor of English at Indiana University -- he doesn't feel the need to give us the whole damn diamond mine.

And he approaches his subject with suitable humility. In 2003 Adams came out with a book called "Slayer Slang: A 'Buffy the Vampire Slayer' Lexicon," and as he notes in the preface here, a reviewer of that book -- a linguist -- pointed out that nowhere in it did he include a definition of "slang." With "Slang" he attempts a definition -- and more -- after realizing that "slang was both more interesting and more complex" than he'd realized. Adams has organized the book into four sections: The first grapples with the definition of this admittedly slippery linguistic concept. The second explores the ways in which we create and use slang as a way of defining our own identities -- either as a way of fitting into a group or separating ourselves from it. The third examines slang as a style, a means of creative expression either spontaneous (or seemingly spontaneous) or contrived, and limning the qualities it shares with its more high-toned cousin, poetry.

In the final chapter, Adams digs into the role slang plays in the way our brains process information. He cites, for example, an academic study in which the subjects' brain activity was measured while they read Shakespeare's "Coriolanus": It would jump whenever they encountered one of the Bard's trickier and more playful uses of the language -- for instance, when he'd recruit a word typically used as a noun for use as a verb, as in "He godded me." Adams writes, "It wasn't as if the brains were confused, exactly, but rather as if they had been awakened from linguistic boredom."

That clarity of thinking and of expression is typical of Adams' book, which was written, he tells us in the preface, not just for scholars but for regular people too. To that end, he draws inspiration from a broad swath of pop culture. Those include Web sites (he quotes a long and blush-inducing list of raunchy slang terms culled from the Web site of the Salem, Oreg.-based "Sly Records"), magazines (he unearths a gold mine of girl slang from the late, beloved Jane), movies (he cites the effective use of "fuckin-A" in Mike Judge's 1999 film "Office Space") and television shows (including, of course, "Buffy the Vampire Slayer," although he finds untold riches of slangification in "The Simpsons" as well).

In defining what slang is, Adams has to spend a great deal of time explaining what it's not. Slang is different, for example, from jargon, which might be defined as a set of words used specifically by insiders in a certain field -- wait staff in a restaurant, for example. Slang, Adams notes, "is a casual language of being, not working language." If that seems like hair-splitting, the reality is that when it comes to language, there are an infinite number of hairs to split. And in exploring the meaning and significance of slang, Adams perhaps raises more questions than he can possibly answer -- but that, too, fits the nature of slang, which evolves and changes not just with each new generation but almost with each passing day. Adams reaches enough solid, thoughtful conclusions to make the book satisfying, though the real pleasures of "Slang" emerge through his restless questioning: For Adams, getting to the answers is most of the fun.

Adams finds some clever ways to trace the historical development of certain types of slang. For instance, he gives us a timeline that outlines the popular terms over the years for the state of being extremely drunk. Before the 1970s, no one used the words "annihilated," "shit-faced" or "ripped." And no one, it appears, has used "jammed" since the 1920s. But "bent," "loaded" and "lit" or "lit up" just keep on kicking: They've been in use since the Prohibition era and show no signs yet of going down the toilet of linguistic oblivion.

In explaining what slang means and where it comes from, Adams writes about how African-American slang finds its way into white culture (and, in the process, often loses its hipness). He describes how full phrasal verbs can be clipped into shorter forms with slightly different shades of meaning: "Bail out" is essentially the same as "bail," but sometimes the jazzier abbreviated form is just the ticket. And Adams finds some lovely ways to describe slang as the language of youth (though it isn't, of course, confined to the young). He quotes a lively, descriptive, jargon- and slang-filled passage written by a young snowboarder in the magazine SnowboarderGirl, noting, with charming and perceptive precision, that the writer "spends whole paragraphs being young."

But Adams really hits his stride in Chapter 3, "Standing Out: Aesthetic Dimensions of Slang," which is where he digs deep into one of the book's central ideas: That slang, as he hints in the book's preface, "may not be poetry, but it's on the way to poetry." In exploring the link between slang and poetry, Adams name-checks the right guys, among them Walt Whitman and William Carlos Williams. But his Exhibit A is none other than Homer Simpson, an unwitting expert at "infixing," the act of making a new word by inserting something in the middle of it. Nonwords coined by Homer include "edumacation," "metabomalism," "pantomamime," "macamadamia" and "saxamaphone." Adams writes, "Homer, who isn't the brightest bulb and seems to have absorbed little enough from his edumacation, may have trouble pronouncing words like 'metabolism'; they're all nonsense syllables to him, so how does he know when to stop?" But Adams recognizes Homer as a "sort of idiot savant": "Saxamaphone," he writes, is "Homer's loving wordplay with his daughter, Lisa, and 'pantomamime' and 'macamadamia' are examples of fun words made more fun to say because the infix also duplicates the preceding syllable -- which is to say that it constructs a sort of rhyme within those words." Then he heads for the capper: "There's plenty of phonetic pleasure in saying these words, and the pleasure is in the poetry." (Adams doesn't address our former president's similar mangling of the language, but if he did, he'd probably find it a lot less poetic than Homer's.)

Only in the book's fourth and last chapter, "It's All in Your Head," does Adams slip a little too far into the tunnel of academicspeak. The chapter's subtitle is "The Cognitive Aspects of Slang," and I don't know about you, but when I see the "c" word, I immediately smell academicspeak -- that is, jargon. Still, not even in this chapter -- in which Adams explores the ways in which the brain processes playful or unusual language -- does Adams completely abandon his goal of writing about slang in a way that's meaningful for a general readership. I confess he lost me when he began parsing the views of king-bee linguist Noam Chomsky as compared with those of Roman Jakobson, a member of the Prague school of linguistics of the 1920s and 1930s (in case you didn't know). Though I realize the Chomsky vs. Jakobson distinctions must mean a great deal to linguists, they made my eyes glaze over: This section of "Slang" is a little too much like a crawl explaining the back story of the war between the Klingons and Lord Sauron.

Adams does make his points as clearly and as swiftly as possible, and not even the book's slower passages can dilute his strong, overarching ideas: that slang is both shaped by the changing culture around us, and in turn helps shape it; and that the rebellious invention of and appropriation of words -- by the young, by subcultures large and small, by the likes of Homer Simpson -- are part of what keeps language vital. In fact, the last chapter of "Slang" is probably much livelier than any chapter with "cognitive" in its subhead has a right to be. Even so, when they come up with a slang substitute for "cognitive," I'm there.