Don't hate Zac Efron because he's beautiful. The teen heartthrob is charmingly casual as a washed-up 37-year-old transformed into his hunky high-school self. 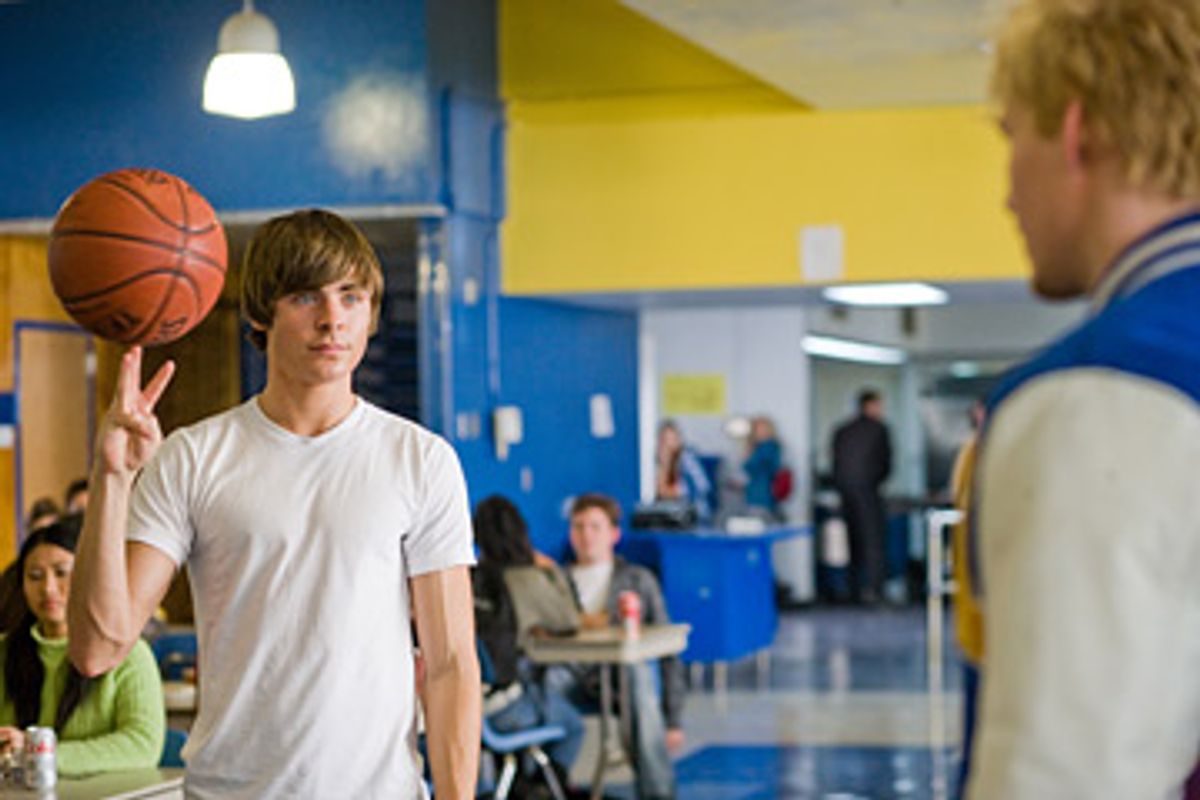 In "17 Again" Zac Efron plays first a 17-year-old and then a 37-year-old trapped in a 17-year-old's body. Efron is charmingly casual and unapologetically good-looking: There's no reason, outside of sheer mean-spiritedness, not to like him. He's not the movie's problem. The problem is that cute Zac Efron grows up to be doughy, OK-looking Matthew Perry, and we're still supposed to find him dreamy, as his wife -- played by Leslie Mann -- does. While it's true that in real life great-looking teenagers often grow up to be average-looking (and perfectly nice) adults, the whole point of a movie like "17 Again" is to give us a dose of fantasy. In movie terms, the Zac Efron/Matthew Perry dichotomy is a cruel bait and switch. There's something a little punishing about the way the movie practically snaps at us, "You don't expect youthful beauty to last forever, do you?"

Of course we don't. And as the grown-up Michael O'Donnell, Perry is perfectly, acceptably sweet. But he wears the look of hangdog, middle-aged defeat a little too obviously -- he makes Willie Loman look like Kelly Ripa. The good news is he's not in the movie too much -- just a bit at the beginning and at the end -- which means we have lots of time to bask in the teen-heartthrob glory of Efron. And, face it, that's the reason "17 Again" exists in the first place.

That's clear in the opening scene, where we see young Mike, circa 1989, the star of his high school basketball team, warming up before a big game -- it could net him a scholarship and thus define his future. He's shirtless, natch, and as he raises his arms to sink the ball into the basket, we get a killer-obvious view of the wild thickets of hair under his armpits -- the crowd goes wild! Director Burr Steers (who made the 2002 coming-of-age comedy "Igby Goes Down") is canny enough to know that Efron is closing in on the last days of his appeal as a crush object for very young girls, so now is the time to show off his Tiger Beat brand of sexuality. That armpit hair is something of a sweet joke -- a reminder of the moment we realized that members of the opposite sex (or the same sex) had hair in interesting places and it made us feel all funny inside.

But after those first few minutes of glory, in which Mike basks in the crowd's adoration, his life takes an unexpected turn. He learns his girlfriend is pregnant; he decides to marry her instead of going to college. Fast-forward 20 years, and Mike -- the Perry version -- has been thrown out by Scarlett (Mann), the woman who was first his high school sweetheart and then his wife. His kids, played by Sterling Knight and Michelle Trachtenberg (who played "Dawn" on "Buffy the Vampire Slayer") don't want to have much to do with him, either. His only friend is Ned (Thomas Lennon), who used to be the nerdy water boy on the basketball team; he's now a rich, eccentric software genius -- and still a nerd. But he sticks by Mike, just as Mike stuck up for him years ago when he was an object of ridicule at school.

Suddenly, a leprechaun disguised as a janitor (or something like that) gives Mike a chance to go back in time, ostensibly to change some crucial aspect of his life, or maybe just to learn something. And so we get Efron back, thank goodness. "17 Again" (which was written by Jason Filardi) takes a while to get cooking, and at times it just feels like a pale imitation of "13 Going on 30." Still, it's often breezily entertaining, partly thanks to Efron, who certainly knows how to be cute. But his timing is good, too, and he appears not to be hung up on his looks -- he talks and moves like a guy who knows he's had an extraordinary stroke of good luck and nothing more.

Efron is particularly good in his scenes with Mann, who's always been a wonderful comic actress. (She showed a great spark of craziness as far back as 1997, when she played loopy Ursula Stanhope in "George of the Jungle.") When she sees the "young" Mike -- he's posing as a friend of their son's, although he is, of course, the kid's father -- she immediately notes his resemblance to the high school version of her husband. The movie briefly makes the requisite cougar joke and then, thankfully, moves on.

Scarlett knows she needs to resist this adorable young hunk, and still she's drawn to him. At one point, just after she's returned from happy hour with a friend and thus has a few drinks under her belt, she steps right up to Mike and starts smooshing his face with her fingers, stretching his skin and caressing it at the same time, marveling at how much this guy looks like the younger version of her husband. He suffers this abuse gladly, like a pup who's happy to be getting his ears scratched. Mann and Efron make such a cute December-May couple that it's a bummer when Perry shows up again as, alas, he must. But for a time, at least, Mann and Efron get to play a match made in heaven -- a heaven where that middle-aged spare tire is just an illusion, and not something that anyone should be forced to carry around in real life.