Me vs. G. Gordon Liddy 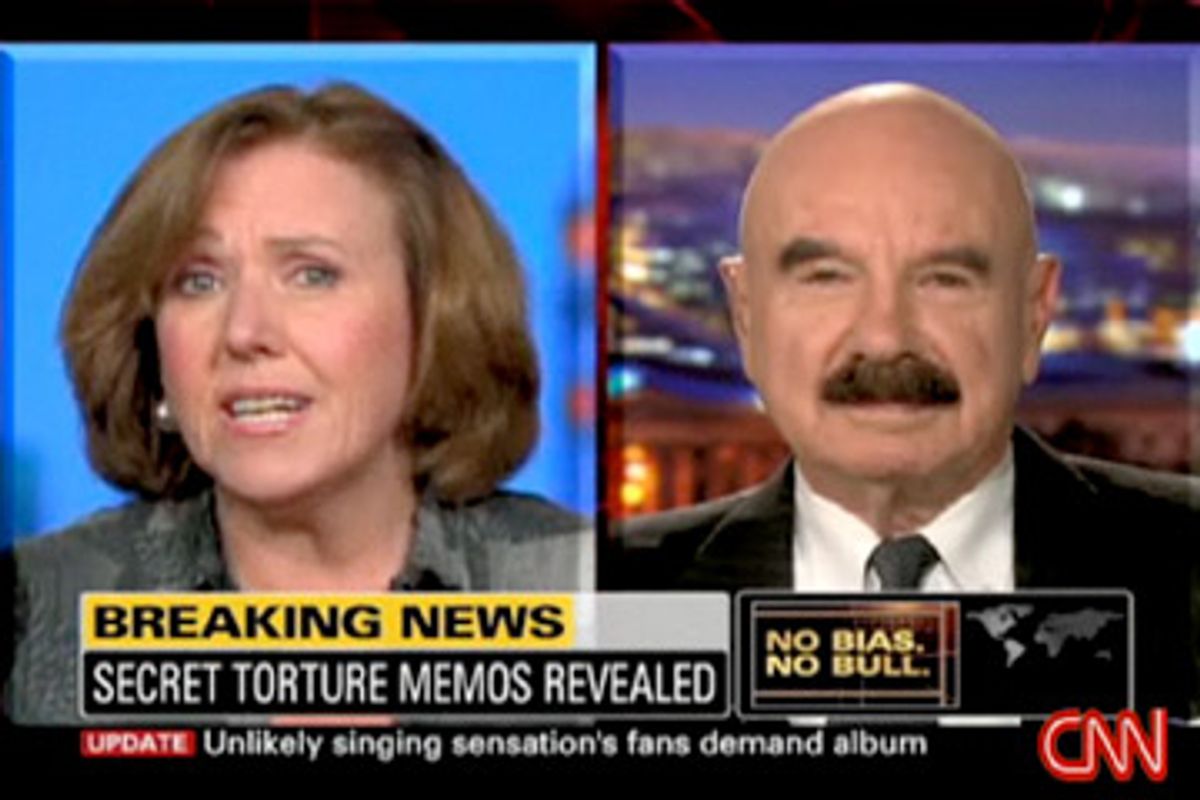 A day after President Obama's release of four stomach-turning torture memos, the lines are pretty clearly drawn. Bush administration apologists insist Obama damaged national security by releasing the graphic documents; civil libertarians applaud what Obama did, but urge him to prosecute those responsible for breaking the law.

Then there's convicted felon G. Gordon Liddy, who told CNN Thursday night that what the memos described wasn't even torture. "Burning at the stake! Boiling in oil! Drawing and quartering! That's torture," Liddy ranted, adding, "I've been through worse on "Fear Factor." (Yes, he's actually been a guest on "Fear Factor.")

Unbelievably, I had to debate Liddy on CNN, with help from Jeffrey Toobin. You can watch the video here (text continues after it).

Also unbelievably, CNN identified Liddy as a "syndicated talk show host"; I had to be the one to say that the man is a convicted felon, who went to jail for helping President Nixon spy on his enemies, so his thoughts on the law and civil liberties are "eccentric" at best.

It's astonishing that a crackpot like Liddy is still being asked to give his views on legal matters, but if they banned all crackpots, there would be no cable news (insert joke about my crackpot status here). What's more disturbing is the clamor from former Bush administration officials and other torture apologists that Obama damaged national security. "It's damaging because these are techniques that work, and by Obama's action today, we are telling the terrorists what they are," a former Bush staffer told Politico's Mike Allen anonymously. “We have laid it all out for our enemies." Of course, Obama already prohibited the use of these techniques, so he's not revealing anything we're currently doing in interrogations.

Others have argued that the graphic memos harm national security by inflaming existing anti-American sentiment, but that's the same case the Pentagon made when we released "The Abu Ghraib Files" in 2006 -- on MSNBC, a hysterical Tucker Carlson told me I'd likely have blood on my hands -- but the Pentagon released the files to the ACLU shortly after we published them, and we never heard of any examples of anti-American agitation, let alone bloodshed, over our publication of the torture images. At any rate, the blame would rest with the Bush-Cheney torture cabal, and not Obama or Salon, if American lawbreaking inflamed public sentiment against the U.S.

I'm a day late, but reading the memos a few things jumped out at me that are worth noting. One was the spooky echo of George Orwell's "1984," especially in Deputy Attorney General Jay Bybee's language, where over and over he writes to "You" -- presumably the CIA official asking for permission to torture. But on second read, the creepy language seemed like legal ass- covering: Almost repetitively, Bybee and Bradbury detail the CIA's claims about the value of their interrogation targets, the care the agents insist they're putting into making sure their torture doesn't cause "pain and suffering," as well as the mental and physical health of the individuals in question. By constantly referencing what they were being told in these memos, Bybee and Stephen Bradbury seemed to be leaving themselves an out, if indeed the CIA's testimony about what they were doing, and to whom, turned out to be false.

And it was often false. The first Bybee memo details the case against, and torture of, Abu Zubaydah, and it was a cavalcade of lies from start to finish. Bybee says his CIA sources told him Zubaydah was a No. 2 or 3 guy in al-Qaida; in "The One Percent Solution," Ron Suskind depicts him as a low-level guy, more like al-Qaida's travel coordinator. More relevant, according to Bybee, the CIA depicted Zubaydah as in good mental health, strong and resilient, ironically thanks to his faith in Islam. But Suskind's CIA sources depict him as an "insane, certifiable, split personality" who, under torture, provided the U.S. with a lot of useless and even false information. In a Salon interview, Suskind said of Zubaydah: "Ultimately, we tortured an insane man and ran screaming at every word he uttered."

Last thought: In my CNN spot, the normally accurate Jeffrey Toobin said he didn't think Obama would be able to prosecute anyone. He correctly singled out the incomparable torture-defender Jay Bybee -- now, incredibly, a judge -- as someone who will forever be shadowed and shamed by the depraved logic on display in the torture memos. But Toobin said it's hard, if not impossible, to prosecute lawyers for bad legal advice. I'm not sure he's right; it's worth noting that Nazi lawyers were prosecuted in the Nuremberg trials.

In the end, I'm with Glenn Greenwald on this one (as usual): Obama deserves huge praise for bucking the intelligence establishment, even within his own admininstration, and releasing these memos. He -- and Congress -- also deserve huge pressure to continue to investigate the lawless Bush administration and prosecute those who broke the law.

Oh, and here's what Liddy Twittered about me this a.m.: "Gman talking about Torture on CNN with a left wing loon from Salon.com," with a link to our debate. You can follow me on Twitter, here.