Would you vote for Eliot Spitzer?

The disgraced New York governor is planting the seeds for a comeback, but in a Newsweek interview he shows no signs of answering for his spectacular hypocrisy. 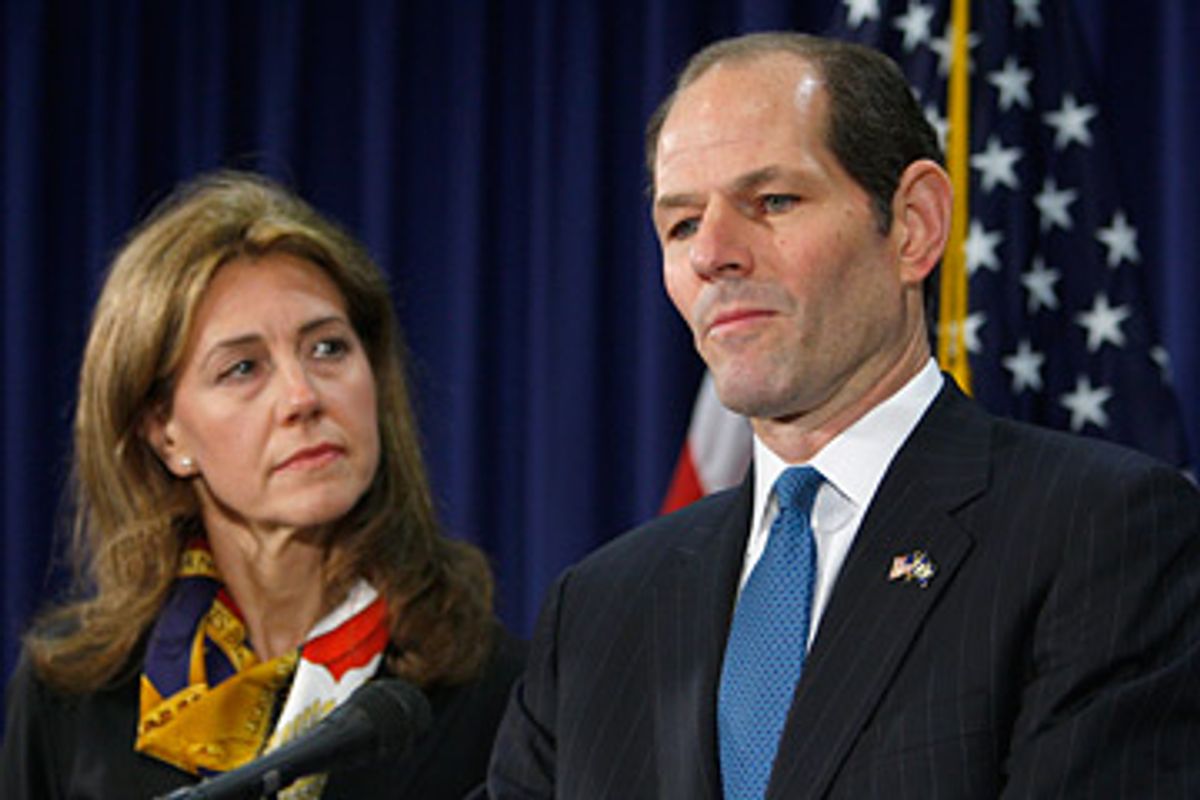 There is a long profile of former New York governor Eliot Spitzer in this week's Newsweek that tackles questions about what he's been up to (walking dogs, writing a column for Slate, wishing he were still governor), whether or not he feels bad about the sex scandal in which he was identified as Client no. 9 in a prostitution ring bust (kind of, because his family was upset and also because now he's not governor anymore), and what he plans to do with the rest of his life (work at his dad's real estate firm and while away the hours until he can be governor again, or senator or mayor or local sheriff or please god anything where people elect him to have lots and lots of power).

It's an interesting article, one in which Spitzer talks willingly about the scandal that brought him down and about the life he's been leading since. It's a piece that really seems to ask: Why can't he get back into politics? Strangers on the street salute and support him, his successor David Paterson has had a disastrous year in office. As the writer Jonathan Darman points out, "It's easy to look at the scope of the problems the country and New York state now face, and to watch the calamity that is Spitzer's successor, David Paterson, and wonder: his wife appears to have forgiven him; why can't we?"

Putting aside for the moment that whatever Silda Spitzer has decided with regard to her marriage should have anything to do with what the public makes of her husband's political future, it's a valid question. I loved governor Spitzer. I voted for him, I supported him, and I was shocked and saddened when his extraordinarily promising political career was cut short by a sex scandal.

I am certainly not alone in my belief that what a politician does in his or her sex life has little to do with what they do with our state, local or national governments. In most instances, I don't care that a guy's a schmuck in his personal life if I agree with what he does politically.

But two of last year's sex scandals challenged that belief for me. One was John Edwards, who cheated on his cancer-stricken wife and may or may not have fathered a child with his mistress. It was top-shelf schmuckitude, that's for sure, but what put it over the top was the political irresponsibility: He was trying to convince the American people to make him the Democratic nominee for president (he initially had my vote) in possibly the most crucial election year of our lifetime. Fury at Edwards was not just about his marriage, his kids, his personal life (though in his case, given how beloved his wife is, and how much we've learned about the tragic death of his eldest son, there was some of that). It was about his willingness to risk his hypothetical candidacy, and therefore the future of his party and his country, on an extramarital affair.

As for Spitzer, what troubled me was the profound hypocrisy. He had made his name and career bringing down law-breakers. For 20 years in New York City, Spitzer had been a prosecutor and then an attorney general who went after Wall Street firms, broke up racketeering rings, and as recently as 2004, busted a prostitution ring. Spitzer ended people's careers, ruined their personal lives, put them in jail, because they broke the rules. Had he simply been having an affair, as governor, I don't think anyone would have blinked an eye. But in this case, he was living outside the laws he'd worked his whole career to enforce, as if they simply didn't apply to him. And that somehow made his personal choices more of a reflection on his professional mettle than they might otherwise have been.

And though Spitzer is willing to talk a bit about his dalliance with prostitute Ashley Dupre, he sounds utterly unwilling to think about why -- aside from the betrayal of his wife and family -- he might have made the choices he did. As Darman writes, "I asked him recently if he'd read any of the theories about why he was so reckless with Ashley Dupre. 'No,' he said, clearly not wanting to say anything more. I started to recite some of the most common ones ... His face flattened, as if in great pain. 'One thing I'm very bad at is being publicly introspective ... The human mind does, and permits people to do things that they rationally know are wrong, outrageous ... We succumb to temptations that we know are wrong and foolish when we do it and then in hindsight we say, 'How could I have?'"

Darman writes that Spitzer then added, unprompted, "I'm not going to say anything that ... should be thought to be an excuse for anything. But there's got to be some element to it's being a result of tension and release. And that builds up." He then appeared unable or unwilling to directly answer a question about whether or not he's in therapy.

The interview is pretty painful, pretty reflective of the frustrations of a caged political animal, one who absolutely craves the freedom of running for office again and feeling his power. At one point in the story, Spitzer, who was reborn last year as a Slate columnist, says to Darman, "I'm just writing a story that I think is pretty good...I'm sure all writers think that." In fact, no writers (at least ones that I've ever met) think that. It's clear that Spitzer is not a born writer but a born politician, brimming with a kind of self-confidence and bullishness that best serves a person who wishes to give up their privacy and their peace in order to be pummeled in public battles for political office.

Darman asks Spitzer if his reemergence means he could run for office again, and his reply is, "I don't know if I could, but I can tell you that is not what this is about." As Darman adds, "For those not skilled in politician-speak, note that he didn't say no."

There was one troubling element of the story, in which Spitzer, who has always walked his wheaten terrier James, explains that now he also walks his second dog, Jesse.

"When he was a young politician with a tough-guy reputation, he preferred to walk only James and leave Jesse, the other family dog, at home. Jesse is a bichon frise, the kind of dog that blue-haired women leave their fortunes to. 'I wouldn't take her out in public,' Spitzer recently explained. 'I thought James was the better image for me.' Now, most any weekend, he can be seen trailing after both animals. 'It's like, OK, I have a bichon, a little white ball of fluff ... I don't care. What do you have to lose?'"

So big tough Eliot Spitzer, not man enough to walk his small dog?

But in seriousness, I'm curious to know what Broadsheet readers think about Spitzer and his hypothetical political future. Would you vote for him?