Obama speaks to the CIA

The president worked to reassure any staffers worried about what his release of the OLC torture memos means for them. 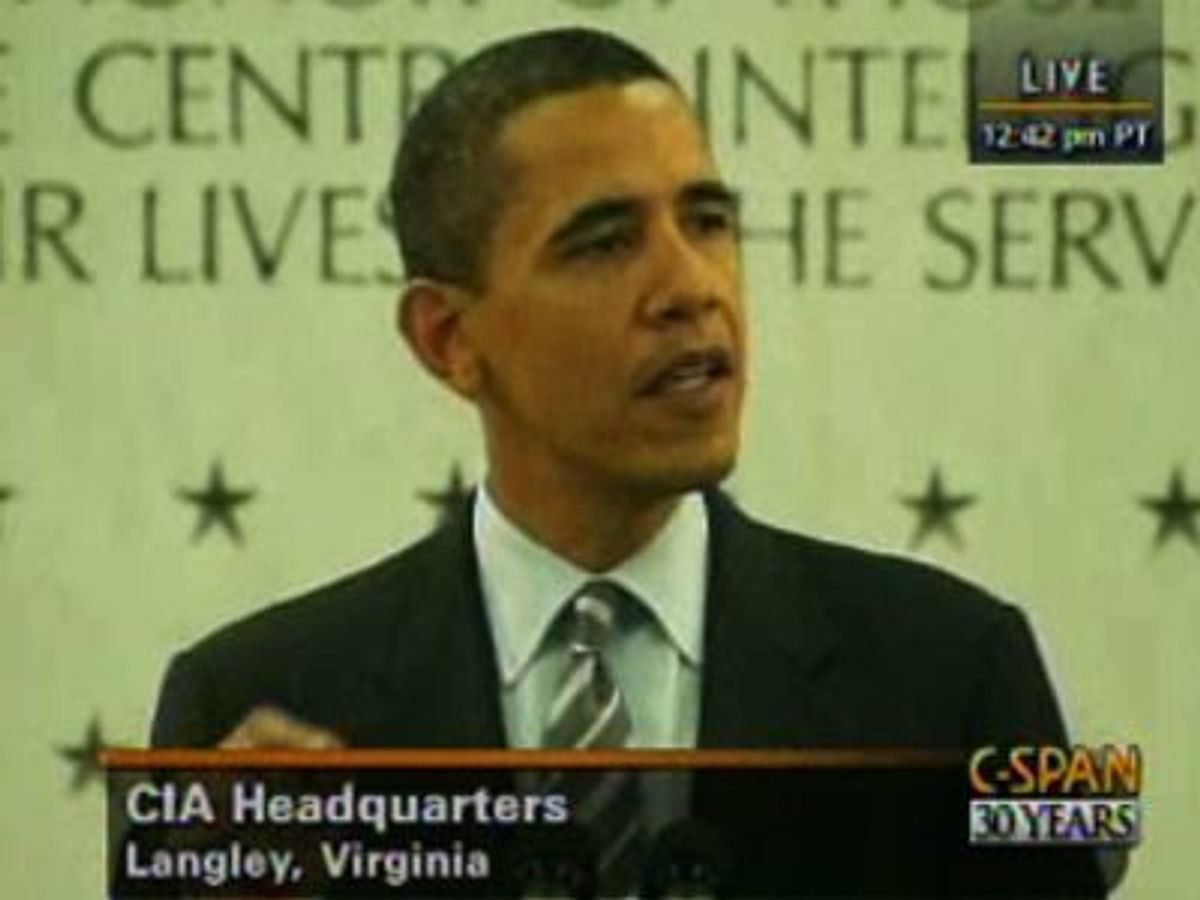 Just days after he released memos providing the Bush administration's legal justification for CIA interrogation methods, including torture -- a decision that could have seriously hampered his popularity within the Agency -- President Obama traveled to its headquarters and met with staff there.

In remarks afterwards (video is below), the president continued to assure CIA officers that, so long as they acted in good faith, they will not be prosecuted for previous wrongdoing. He also worked to soothe anyone who's worried they won't have the full support of his administration.

"You serve capably, courageously. And from here in Virginia to dangerous outposts around the globe, you make enormous sacrifices on our behalf. So you should be proud of what you do," Obama said. "You've got my full support... We will protect your identities and your security as you vigorously pursue your missions. I will be as vigorous in protecting you as you are vigorous in protecting the American people."

Given what happened to the CIA's Valerie Plame under his predecessor's watch, those last couple sentences are particularly interesting, both for what he did say and what he left out -- that is, a direct reference to President Bush's tenure or to Plame.

Even when the president addressed the memos specifically, the audience was supportive, though of course it might not have been a representative sample. An excerpt:

I know that the last few days have been difficult. As I made clear, in releasing the OLC memos, as a consequence of a court case that was pending and to which it was very difficult for us to mount an effective legal defense, I acted primarily because of the exceptional circumstances that surrounded these memos, particularly the fact that so much of the information was public, had been publicly acknowledged.

You know, there have been some conversations that I've had with senior folks here at Langley, in which, I think, people have expressed understandable anxiety and concern. So I want to make a point that I just made in the smaller group. I understand that it's hard when you are asked to protect the American people against people who have no scruples, and would willingly and gladly kill innocents. Al-Qaida's not constrained by a constitution. Many of our adversaries are not constrained by a belief in freedom of speech or representation in court or rule of law.

But I'm sure that sometimes it seems as if that means we're operating with one hand tied behind our back, or that those who would argue for a higher standard are naive. I understand that. You know, I watch the cable shows once in a while.