Cheney goes back on the warpath

In an interview with Sean Hannity, the former vice president sharply criticizes President Obama, and calls for the release of additional torture memos. 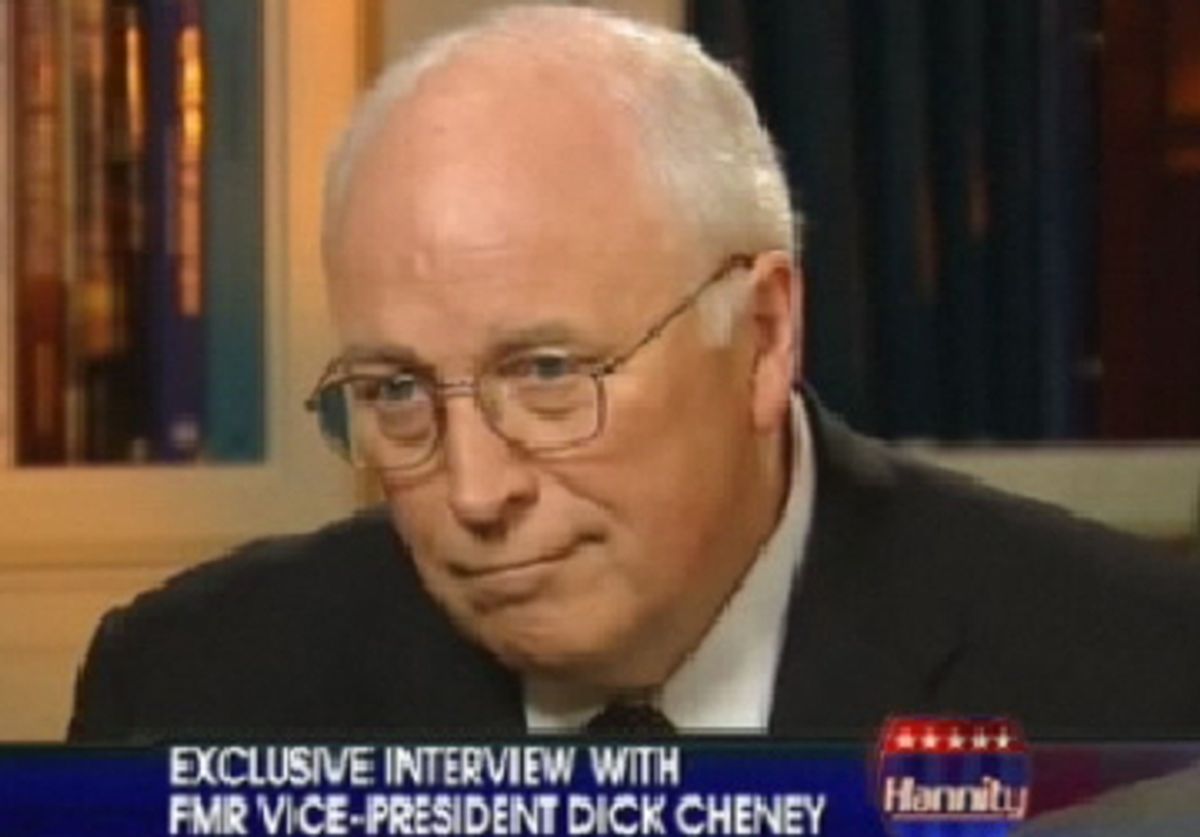 I've figured out the secret of White House Chief of Staff Rahm Emanuel's success. You heard it here first, folks: The man has a direct line to God. How else do you think he could get his prayers answered so consistently in the form of former Vice President Dick Cheney?

There's no one the administration would rather battle (except, perhaps, Rush Limbaugh), as Cheney remains about as popular as dandruff, and very few people agree with anything he says, even on his big issues, like national security. So when he gives yet another interview, this time to Fox News' Sean Hannity, in which he bashes President Obama and his policies, it's not hard to imagine a celebration inside the White House.

Cheney's latest interview -- the first part of which was broadcast on Monday night -- was fairly predictable, at least on Hannity's side. He specializes in these kinds of conversations with his ideological allies, either fawning over them or helping them to attack their common enemies, his lines of questioning in the latter case largely limited to, "Why do you think President Obama hates America?"

I'm paraphrasing here, and exaggerating for comic effect, but that really is a fairly accurate description. Take this actual question as an example: "We have a president that is now critical of our economic system. He is apologizing seemingly for our superpower status in the country -- around the world, apologizing for America in general... And he doesn't seem to like to tell the good story of America, at least he hasn't on this trip. Does that show you anything about his ideology, about his thinking, or does that concern you in terms of what his belief system is or the principles that guide him in making decisions?"

The former vice president ate it up, of course, and though he said he believes "it's important not to personally attack the new president" he went on the offensive against Obama. "[W]hat I find disturbing is the extent to which he has gone to Europe, for example, and seemed to apologize profusely in Europe, and then to Mexico, and apologize there, and so forth," Cheney said in response to the question from Hannity mentioned earlier. "The world outside there, both our friends and our foes, will be quick to take advantage of a situation if they think they're dealing with a weak president or one who is not going to stand up and aggressively defend America's interests... Sometimes it's important that a president speak directly and forthrightly to our European friends. And you don't get there if you're so busy apologizing for past U.S. behavior."

Cheney also specifically discussed the recent release of memos prepared by the Department of Justice's Office of Legal Counsel, which had formed the Bush administration's legal justification for CIA interrogation methods, including torture. "One of the things that I find a little bit disturbing about this recent disclosure is they put out the legal memos, the memos that the CIA got from the Office of Legal Counsel, but they didn't put out the memos that showed the success of the effort. And there are reports that show specifically what we gained as a result of this activity," the former vice president said. "I've now formally asked the CIA to take steps to declassify those memos so we can lay them out there and the American people have a chance to see what we obtained."

Below, three videos from Cheney's appearance on "Hannity." In the first, Cheney talks about the Obama administration's counter-terror strategy, about his successor and about the president's recent trip to Europe. In the second, among other things, he talks about Obama's handshake with Venezuelan leader Hugo Chavez. And in the final clip, Cheney talks about his request for the release of additional memos about CIA interrogations.