To hell with Alec Baldwin's divorce

The Atlantic's Caitlin Flanagan suggests the actor's troubled family would have been better off if they just screamed at each other under the same roof. 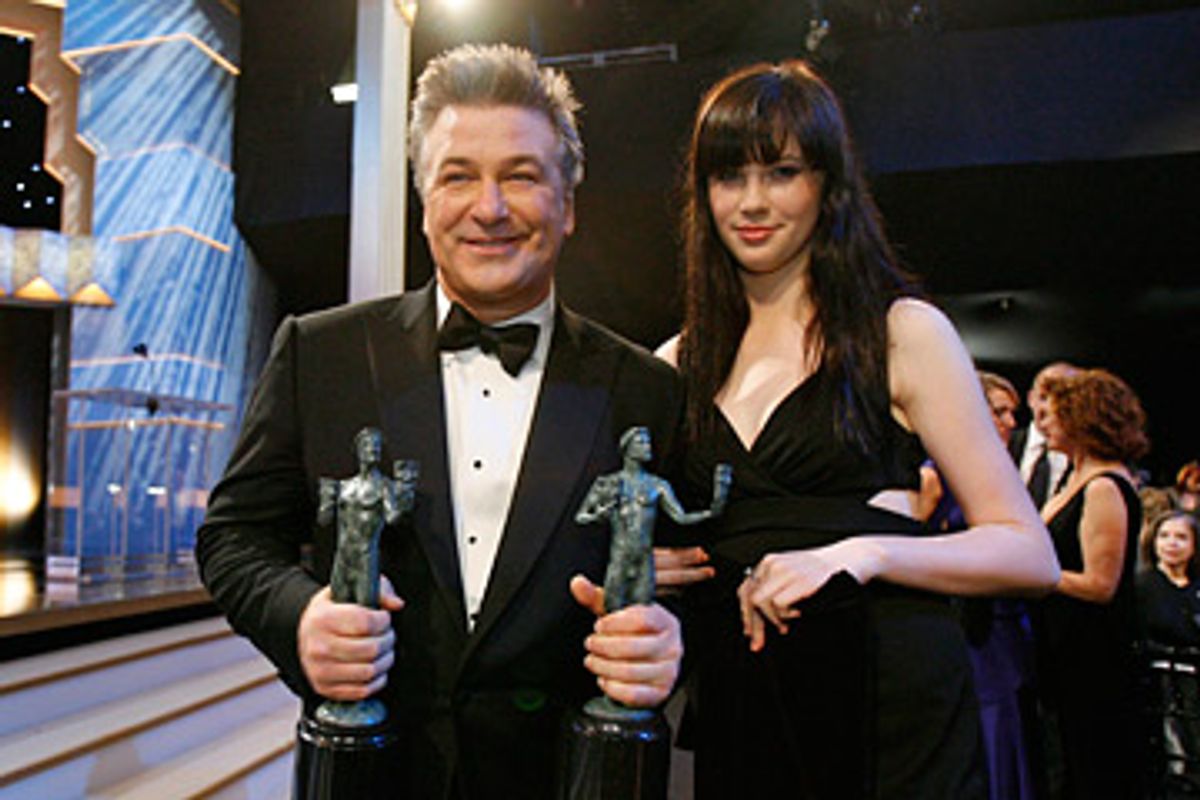 I'm not entirely sure that Caitlin Flanagan's most recent column in the Atlantic goes so far as to suggest divorce will always lead to an unresolved, unhealthy relationship with vaguely or perhaps explicitly sexual overtones between a girl and her father. But I can't say I'm certain it doesn't, either. Flanagan, of course, started her career taking cheery, seemingly sociopathic snipes at working mothers while insisting that writing magazine pieces for the Atlantic and the New Yorker, and "To Hell With All That," a book on reclaiming one's inner housewife (while employing hired help to do most of the cleaning), did not qualify her for inclusion among their ranks. In recent years, Flanagan has turned her attention to the emotional lives of adolescent girls for a forthcoming book. As the pieces have trickled out, in magazines (Flanagan and the New Yorker parted ways after a short-lived affair) and in newspapers, they have given us good reason to suspect that the emotional lives of our daughters might benefit by hewing to as little of her advice as possible.

The girl who has caught Flanagan's attention this month is Ireland Baldwin, the now 13-year-old daughter of Kim Basinger and Alec Baldwin, and the unlucky recipient of a voice mail from her father that was, in Flanagan's words, "so grotesque that it's hard to imagine any piece of written communication short of a suicide note changing our opinion of it." Not that it's any of "our" business, but since the voice mail leaked to gossip sites, nearly two years ago, Baldwin's run as Most Publicly Despised Divorced Dad has so threatened to overwhelm his image as, say, the new-fashioned Lou Grant on "30 Rock" that he had to go ahead and write a whole book about how much he really, really loves his daughter. (The column is actually a review of "A Promise to Ourselves," Baldwin's book about family law.)

Flanagan has a fairly measured take on Baldwin's railings against the child custody system as being "reflexively anti-father." While not entirely disagreeing with him, she does point out that he also admits "to having a terrible temper and to having displayed this protean force in front of the very people authorized to decide his fate. Family court," she writes, "is charged with protecting the physical and emotional safety of children, and if you tend to rave during depositions, you're not going to like the custody orders you get." Fair enough.

Of the infamous phone call, Flanagan writes: "When a man calls an overweight woman a pig, he is saying she is fat. When he calls a slim and attractive girl -- someone like Ireland -- a pig, he is using the word in another sense, one that suggests a particularly feminine kind of repulsiveness. It was a horribly crude, almost sexual thing for a man to call his daughter." While I'm not sure that the impact of the insult makes a vast emotional difference to women of different sizes, she's right: It is horrible and it does seem uncomfortably sexual. (She doesn't seem to dwell much on the meaning of what to me was the most disturbing part of the call: when he threatens to fly to California and "let her know" and "show" her "just how I feel" about her piggish behavior. While none of us know if he meant that as hyperbolic threat or a description of a darker future action, if it's the latter, things might be even worse than they seem.)

What a surprise, then, to discover, well into Page 5 of her article, that Flanagan's real subject is how the "father-daughter relationship is a kind of romance." According to Flanagan, a daughter's primary appeal to her father comes directly out of her ability to evoke the erotic beauty of his wife ("In his daughter, a father discovers a person whose very bloodline ensures she will be charming to him: at the precise moment that his wife is fading into middle age, her beauty resurges in the daughter -- there's that unlined face you fell in love with so many years before!"), while somehow inheriting all of his favorite conversational topics ("Instead of nattering away about all the tedious things your wife is always talking about, this ravishing new version has been programmed (by you) to talk about and care about all the things you are interested in"), and regarding him as the primary fountain of masculine virtue ("As for the girl's feelings about you --well, you're everything. You're not a man; you're the measure of a man"). You know, except for all those teenagers and parents whose complete sense of estrangement and alienation from one another drive the engine of a good portion of Western literature, young adult fiction and TV sitcoms.

Anyway. I don't want to seem so intellectually dense that I dismiss all archetypes out of hand. I know an Electra complex when I see one  -- like, for instance, in the most famous literary example of the 20th century, Sylvia Plath's poem "Daddy," helpfully provided by Flanagan in her essay -- but you can already see Flanagan sneaking off into the woods, with her knapsack filled with the Greeks and her psychoanalytic texts, to get up to no good.  First she lays the groundwork: According to her, family life is designed to "contain both romances" -- that of their parents' love for each other, and the father's love for his daughter -- and for a young girl, "If your father thinks you're enchanting, but he's put your mother out to pasture -- well, that's just disturbing." Then she goes in for the kill: "The real sorrow of young Ireland's life is not that she has a father with an ugly temper; it's that the circle has been broken." And, in an echo of her famous line that "when a mother works, something is lost," Flanagan says that because of her parents' divorce, Ireland is bereft of any models on which to build her "own dream of marriage and enduring love": "Her own home -- that contested piece of property, subject to her father's mood and her mother's caprice --can offer her nothing."

Got that? Nothing. Well, except for the example that comes from not living in a home in which her allegedly raging father and allegedly capricious mother go at each other every day but also limit their own erotic relationships to each other, for her own sake, perhaps shackling her with an additional burden of guilt. Or perhaps the confidence to stand up to people who call you ugly names. But whatever. I’ve obviously got no insight into the past and present lives of Kim, Alec and Ireland, and it doesn’t sound like divorce has worked out well for them either. But there are certainly situations when divorce is exactly the thing to do when both mothers and fathers are thinking of the best interests of their child. It's absurd and cruel to hide behind ill-fitting archetypes of allegedly universal father-daughter love when one could simply give the specific girl in front of you what she needs.