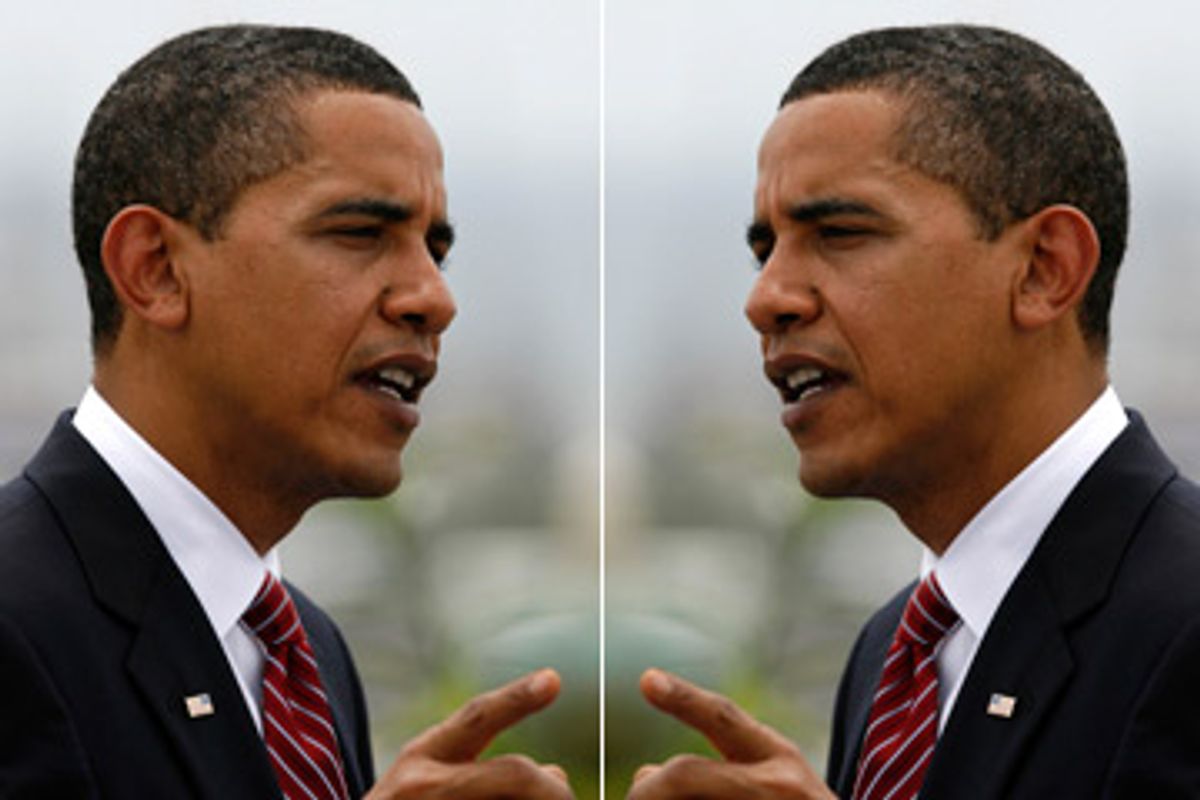 Two presidents for the price of one? That was the joke when Bill and Hillary Clinton made their respective presidential bids. In the case of Barack Obama's victorious quest for the presidency, the joke became reality. There are two Obamas. One is the foreign policy president whom America needs at this moment in history. The other is a domestic policy president who has yet to find his way.

In foreign policy, Obama is just the president the U.S. required after eight disastrous years of George W. Bush. In a remarkably short period of time, the president has done much to revive the reputation of the U.S. among its allies and enemies alike. No American president since John F. Kennedy has combined charisma with the ability to inspire people around the world with visions like Obama's call for the ultimate eradication of nuclear weapons.

And talk has been joined with action. Quietly and undramatically, but thoroughly and systematically, the president has repudiated one Bush-era policy after another. The Bush administration was arrogant and unilateral. The Obama administration is modest and multilateral. The new president has signaled a willingness to engage Iran, partly lifted the ban on the travel of Americans to Cuba and, to the horror of the American right, has shaken hands with Hugo Chavez.

Many are upset that the Obama administration won't prosecute Americans who tortured U.S. prisoners during the Bush years for war crimes. But the administration's release of appalling details about the Bush administration's torture methods is the bravest sunshine policy since the Church Committee revealed part of the sordid history of U.S. assassination plots in the 1970s.

Obama's decision to reinforce U.S. troops in Afghanistan may or may not succeed (assuming that we can settle on a definition of success in the region). But like his plan to prudently draw down U.S. forces in Iraq, it reflects his correct assessment that the Iraq war from the very beginning was an unnecessary and costly distraction from the battle against Osama bin Laden's allies and sponsors in Afghanistan.

Then there's domestic Obama. In economic policy, Obama has been as uncertain as he has been successful in foreign policy. His fundamental error was to place National Economic Council director Larry Summers and Treasury Secretary Timothy Geithner in charge of the U.S. economic recovery effort. Geithner's credibility was damaged by his failure to pay taxes, while revelations about what Summers earned from the hedge fund D.E. Shaw and Goldman Sachs struck many as proof that Obama's team has been subject to what the economist Joe Stiglitz calls "regulatory capture" by Wall Street. The problem is not so much corruption as groupthink. It was never realistic to think that an individual like Summers, who spent much of his adult career supporting the discredited establishment consensus regarding financial regulation and trade, could think outside of a box he helped to build, even if he hadn't been paid handsomely by some of the architects of global economic disaster. And yet Obama, relying on Summers and Geithner, has failed to seek counsel from economists and other experts with alternative views.

The assertion that domestic Obama is too cautious, incrementalist and deferential to experts like  Summers and Geithner may seem strange, in light of Republican claims that the president is a revolutionary trying to impose European-style socialism on America. Isn't his budget full of bold, sweeping initiatives with respect to energy, healthcare and education? As Talullah Bankhead said on leaving an avant-garde play, "There is less in this than meets the eye." Many of the president's initiatives combine grand visions with proposed changes or appropriations that are best described by the technical social science terms "piddly" and "dinky."

According to progressive economists as diverse as James K. Galbraith and Paul Krugman, the stimulus itself may have been much too small. Obama's grand vision of high-speed rail, on close examination, turned out to be a combination of an old, familiar map of proposed routes with relatively small-scale funding. Other, genuinely big initiatives like a comprehensive cap-and-trade scheme are likely to die in Congress. A cynic might wonder whether the smart people in the administration know this and are treating mere official proposals that fail to go anywhere as sufficient payoffs to important Democratic constituencies like environmentalists.

The truth is there aren't two Obamas, only one Obama in two situations. The very qualities of temperament that are virtues for the president in foreign policy -- caution and a tendency to defer to the credentialed experts -- are vices when it comes to domestic policy.

Obama was right to hold over Defense Secretary Gates and Gen. Petraeus from the Bush administration. These moderate realists had repudiated radical neoconservatism in the last couple of years of Bush's second term. By contrast, Summers and Geithner share many of the assumptions of Hank Paulson during Bush's last few months in office. And Paulson, unlike Gates, did not break with the orthodoxy of the Republican right of the last few decades. On the contrary, despite minimal concessions to the need for more regulation, that market triumphalist orthodoxy continues under Obama. It is as though Donald Rumsfeld had remained secretary of defense until the end of Bush's term and Obama had allowed him not only to stay in office but to continue to pursue the failed neocon foreign policy design.

In January, Geithner ruled out any consideration of nationalization of insolvent banks thus: "We have a financial system that is run by private shareholders, managed by private institutions, and we'd like to do our best to preserve that system." Implicitly, he endorsed the old slur of the right that liberals (in this case proponents of Swedish-style temporary nationalization) are un-American enemies of private enterprise. Summers recently told Time magazine that cutting Social Security and Medicare, by methods that might include forcing Americans in their 60s to work longer, will soon be on the agenda of the administration. The American people voted against John McCain, who idealized markets and spread alarm about entitlements. And they got Barack Obama, whose most important economic policymakers idealize markets and promise to cut entitlements.

In his defense, it might be pointed out that Obama has been on the road. And perhaps this is part of the problem. Obama seems to be more comfortable in foreign policy than in domestic policy, and the adulation that he received abroad even as a presidential candidate must be gratifying. But he can't run for prime minister of Britain or chancellor of Germany, and if his conservative economic team fails to put the U.S. economy back on the track to sustained, long-term prosperity, popularity in foreign countries won't prevent him from being a one-term failure at home. We had a president who did more than any other to achieve Middle Eastern peace and yet was viewed as dithering and incompetent in responding to economic crisis. Barack Obama needs to combine his welcome skills in foreign policy with a yet-unseen boldness in economic policy, if he is to avoid the fate of Jimmy Carter.