Forget the sappy trailer. This triumphant movie about failure has nuance and feeling -- not to mention Robert Downey Jr. and Jamie Foxx. 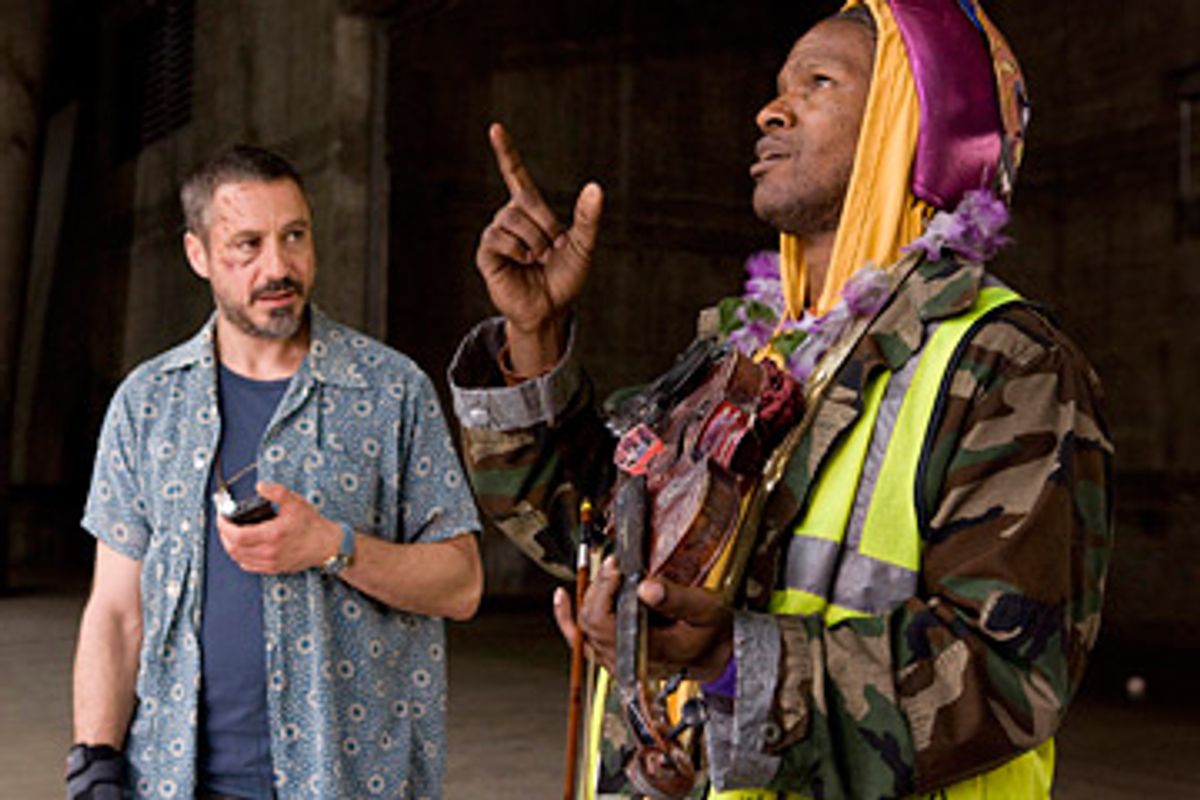 If you've seen the trailer for "The Soloist" -- in which Robert Downey Jr. plays a journalist who befriends, and tries to help, a schizophrenic and homeless man played by Jamie Foxx -- you probably think the movie is one of those uplifting friendship stories guaranteed to elicit one or two obligatory tears before sending everybody home feeling good. That's what the guys who edited that trailer want you to think: Movie advertising is never about nuance, but movies often are.

Actually, "The Soloist" is a triumphant movie about failure, and the best things about it can't be captured in a craftily edited trailer. The picture is based on a true story, that of Los Angeles Times columnist Steve Lopez, who one day came across a Skid Row denizen, Nathaniel Ayers, playing a violin with only two strings. Lopez learned that Ayers had attended Juilliard at one point, but his mental illness prevented him from functioning normally in the world. He wrote about his friendship with Ayers in his columns, which were later adapted into the book on which this movie is based, "The Soloist: A Lost Dream, and Unlikely Friendship, and the Redemptive Power of Music."

Come to think of it, the title of that book does have the same feel-good vibe as the movie's trailer. But the redemption that director Joe Wright and his actors go for in "The Soloist" is the thorny kind, the sort that means acknowledging limitations instead of blithely believing you can break through them. Wright, who previously directed the Ian McEwan adaptation "Atonement," as well as the controversial (among Jane Austen fans, at least) "Pride and Prejudice," likes a certain grandness of emotion, and in places he takes the risk of tipping the action into excessive melodrama. (The script, adapted from Lopez's book, is by Susannah Grant.) But that kind of risk-taking is what's missing in so many mainstream movies these days: It's become unhip to feel, and Wright is having none of that. He takes firm control of the movie's tone and shifts it around as necessary: The first half of "The Soloist," which describes Lopez's meeting and initial attempts to help Ayers, really does appear to be about sweeping, life-changing redemption; the second, more clear-eyed half is about the hard work that happens after you feel you've been redeemed -- or after you've done the redeeming.

Downey's Lopez is a hardworking newspaper guy who's become ground down not just by the demands of his job but by the depressing landscape of newspaper journalism in general. There are sequences in "The Soloist" in which Lopez might be talking on the phone as a fallen colleague marches past him in the background, toting file boxes or a potted plant. (Another recent movie, Kevin Macdonald's "State of Play," also addresses, head-on, the death of newspapers; although "The Soloist" was originally slated to be released last fall, the fact that these two movies are appearing almost simultaneously only highlights the urgency of the situation.) Like so many newspaper professionals, Lopez is good at cranking out copy week in, week out, but keeping it fresh has taken a toll on him. (It doesn't help that his marriage to an editor at the paper, played by Catherine Keener, has fallen apart, although the two maintain a close, if prickly, friendship.) So when, wandering around the city one day, he stumbles upon Foxx's Ayers, getting some weirdly gorgeous music out of that two-stringed violin, he sees a great story in front of him. Later, he'll see the actual man.

"The Soloist" is less about a friendship between a journalist and a down-and-out, mentally ill musician than it is about the process of really seeing what -- or who -- is in front of you. The first encounter between Lopez and Ayers is both funny and jarring. Lopez tries to ask him straight, journalist-type questions and gets nowhere. For one thing, Ayers lives in a different Los Angeles, one ruled over by his god, Beethoven, and one where the best acoustics can be found under certain overpasses and not in a concert hall. He answers Lopez's questions with jittery, free-jazz nonanswers that are like abstract paintings -- there's meaning in them, but you have to dig for it.

Lopez eventually learns that Ayers was a musical prodigy at Juilliard, a gifted cellist. He contacts Ayers' sister (played by Lisa Gay Hamilton), who has lost track of him. When he begins writing about Ayers, readers respond enthusiastically -- an elderly woman even sends him a beautiful cello, and Lopez arranges for the instrument to be kept safe at a local community center, so Ayers can play it whenever he likes. Lopez pushes further: He wants medication for Ayers; he wants to find him a place to live; he wants him, of course, to keep playing music.

But the question of what Ayers wants for himself is more difficult to discern, and the increasingly fraught push-pull between these two men is what keeps "The Soloist" whirring. Downey and Foxx are wonderful here. When you're looking for an actor to play a man with the weight of the world on his shoulders, Downey is the go-to guy. What's remarkable about him, though, is that he finds so many shades of subtlety in the ideas of guilt, responsibility and anxiety. Lopez takes delight in Ayers -- the man's passion for his music awakens in Lopez a kind of healthy envy, a wish that he too could have such strong feelings about something -- and Downey radiates that joy quietly, with a gently arched eyebrow or a gradual, slow-creeping grin. But he also shows us how much Lopez's helplessness pains him. Foxx's Ayers may be tortured, but Lopez's suffering, as Downey plays it, may be almost as great. He's tortured by what he can't do, whereas Ayers has achieved a state that eludes so many people who are much better off: He's a success at living in the moment.

Foxx doesn't make Ayers an object of pity. Nor is the performance a "Rain Man"-style stunt. Foxx plays a person, not a condition, and he uses more than just dialogue (in Ayers' case, stuttering, repetitive rambles) to shape the character. For one thing, there's pageantry in Ayers' ever-changing uniforms: He favors sequined Sun Ra-style get-ups that look as if they've been fashioned from strippers' castoffs. Foxx wears these outfits resplendently, reveling in their crazy, joyful elegance. But his Ayers isn't just the lovable, harmless loony: Foxx shows us, sometimes with nothing more than a glancing frown, that even in his perpetually confused state, Ayers resists having his life usurped. His grasp of reality may be tenuous, but his sense of self-possession is still vital. "The Soloist" is only partly about the isolation of mental illness; it does a better job, maybe, of getting at the isolation human beings feel when they've tried to do the right thing and realize that they can never really do enough. In the end, "The Soloist" is about how unknowable other people really are -- an idea that's terrifying until you step back and see the wonder of it.