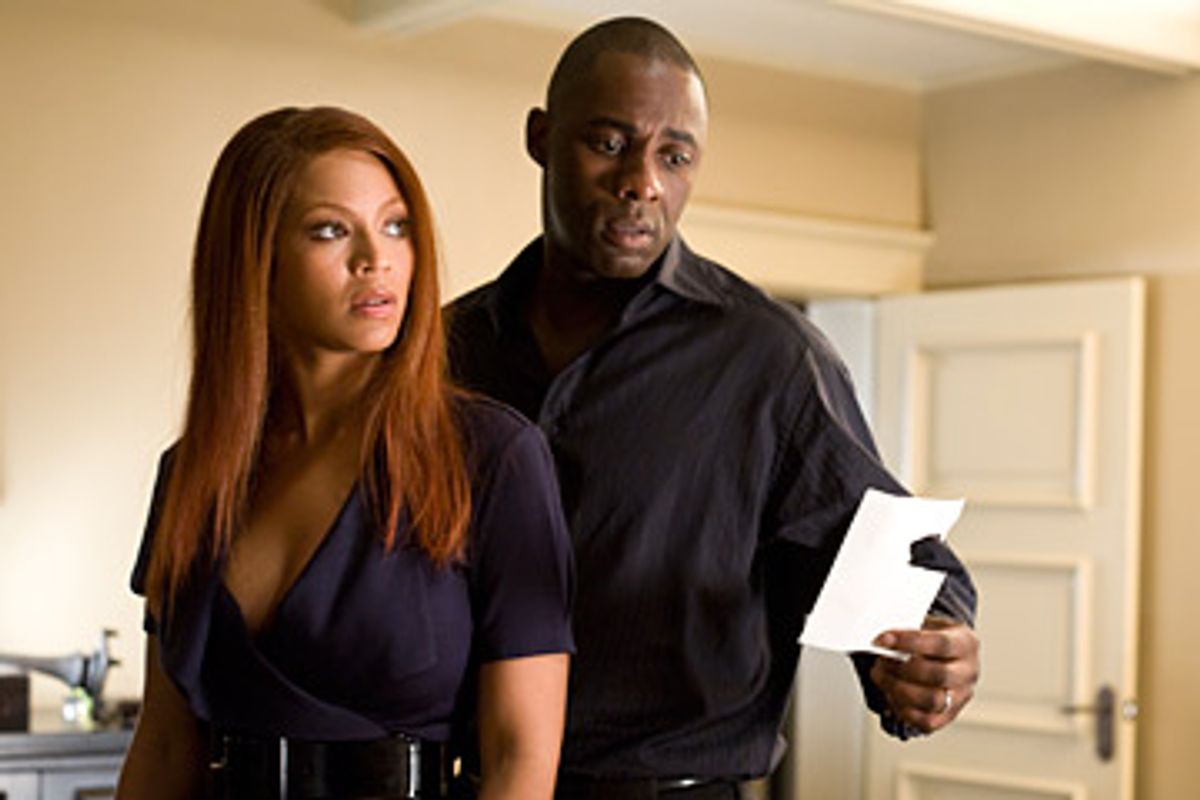 In theory, "Obsessed" has everything going for it: Sharon and Derek, a happily married, affluent and very beautiful young black couple (played by Beyoncé Knowles and Idris Elba) find their union shaken by Lisa (Ali Larter), a shameless -- and totally bonkers -- white hussy who temps at hubby's office. Lisa pounces on Derek in the men's room during the office Christmas party, shows up unannounced at the hotel where he's attending a business retreat and, while Sharon and Derek are out on a date, even wheedles her way past the babysitter to cuddle their young son. It's only a matter of time before Sharon, at first oblivious to these psycho highjinks, catches on to Lisa's plot and, figuratively speaking, claws her eyes out.

But "Obsessed," directed by the unfortunately named Steve Shill (making his feature debut) and written by David Loughery ("Lakeview Terrace," "Passenger 57"), takes far too long to get cooking, and it works so hard at not being exploitation that it loses sight of its reasons for existing in the first place. Face it: The idea of white women "stealing" good black men is a contentious one, at least in the black community. But you don't have to be a black woman to want to see Beyoncé kick that loony white bitch's much scrawnier ass.

"Obsessed" needs to be crazier and steamier on the way to the inevitable head-butting, hair-pulling showdown. That's a shame, because the performers here certainly look game for everything. Elba -- who plays Charles Miner on "The Office" -- doesn't have a particularly beefy role: He just gets to play the poor, principled husband and father who does everything he's supposed to do and still gets screwed. But both Beyoncé and Larter look ready to let it rip, and the movie keeps them apart far too long. In this corner, we have Beyoncé's Sharon: With her robust booty and shimmery ringlets, she's a Botticelli bruiser. And in this corner, Larter's Lisa is so conniving, so colorless (both literally and figuratively), so outright nuts that you're just waiting for Beyoncé to move in for the kill. Eventually, it happens, but until then we're left to suffer through too many minutes of limp suspense. When Larter and Beyoncé finally get their big moment, at least the movie's costume designer, Maya Lieberman, has done her job: She puts one contender in skyscraper heels, the other in bare feet. May the girl in the tallest Choos win.