The ultra-orthodox Catholic can't get remarried in the church unless he says he made a "mistake" and gets an annulment -- after a 28-year marriage. Time to reform Catholic divorce. 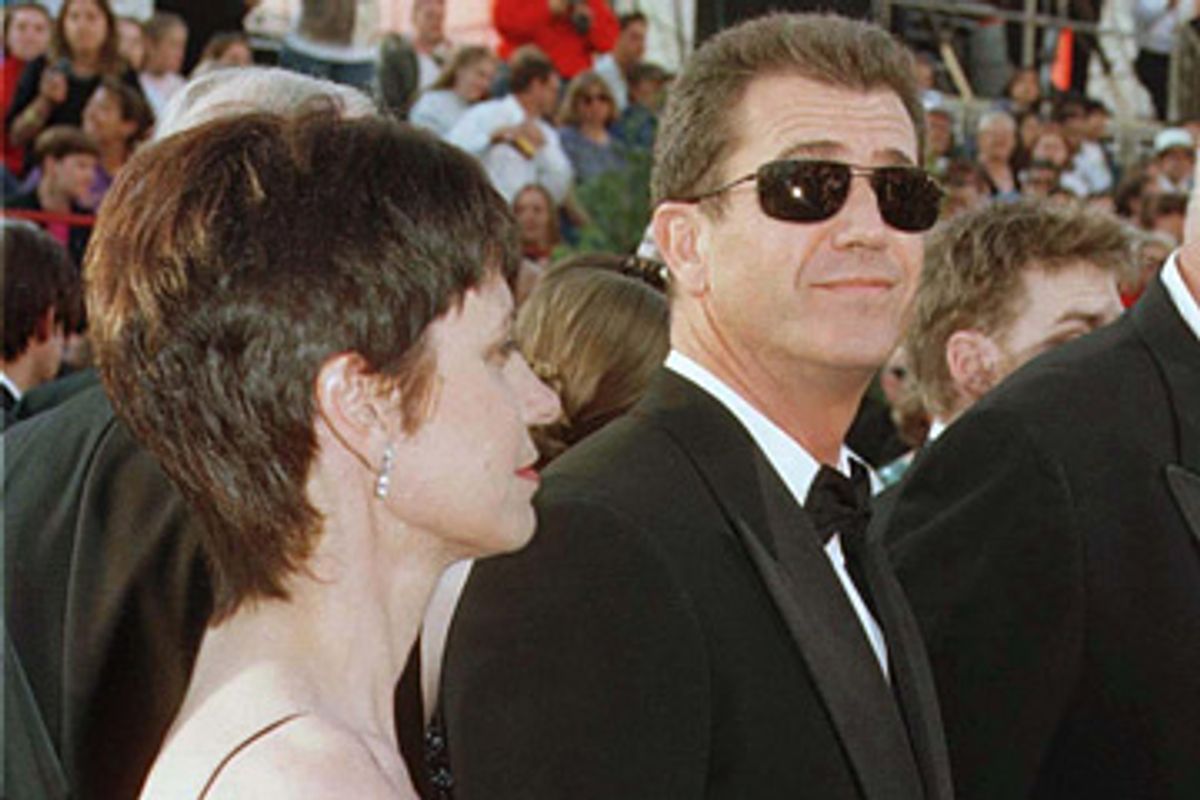 Holy Week ended with a big bang in the conservative Catholic community. Robyn Moore, Mel Gibson’s wife of 28 years and mother of their seven children, filed for divorce in Los Angeles. With no prenuptial agreement, she is likely to get a settlement worth somewhere around half a billion dollars. Seems like a small price for 28 years of living with Mad Max and his homophobia, anti-Semitism and ultra-orthodox Catholicism.

In a joint statement, the couple acknowledge that they separated in August 2006 shortly after Gibson was arrested for drunk driving. When he was arrested Gibson publicly humiliated his family by engaging in a drunken tirade claiming that the Jews started all the wars in the world and asking a female police sergeant who was filming the event, "What are you looking at, sugar tits."

But the tipping point that led Moore to seek a divorce seems to have been the publication of photos and stories about Gibson cavorting on a Costa Rican beach with an unidentified young woman. A Russian pop idol named Oksana says she’s the one and Gibson has asked her to marry him. Others claim the woman on the beach was a different Oksana, 39-year-old Ukrainian singer Oksana Grigorieva, who lives in a house owned by the CFO of Gibson’s production company Icon and is the former girlfriend of Timothy Dalton.

Why is it that these right-wing family-values guys are always the worst sinners? Newt Gingrich, Ted Haggard, Larry Craig and now Mel Gibson. Gibson was quoted in the Observer in 2000 as having said, "There is nothing more important than your family. If you ruin that part of your life, what’s left? Work? Money? Screwing around? I see a lot of people living like that tell themselves they’re having a good time, but if you look under the surface you see lots of corpses masquerading as human beings." And speaking of corpses, Gibson has an odd view of who is going to heaven and who is not. His wife, for example, is not, in the Gospel according to Mel. He acknowledges that she is "a saint, she’s a much better person than I am," but rules are rules. She is, he notes, "like, Episcopalian, Church of England. She prays, she believes in God, knows Jesus, she believes in all that stuff, but that's not good enough. And it’s just not fair if she doesn't make it," laments Mel, "but that’s a pronouncement from the chair. I go with it."

In case you don’t get the reference, the chair is the throne of St. Peter. When popes issue their very rare infallible teachings, they are said to do so "ex cathedra," from the chair. Gibson falsely believes some pope infallibly declared that only Catholics go to heaven.

Now one can forgive Gibson for believing this discarded teaching. It has been around in various forms since Saint Cyprian, a third-century bishop, uttered the words "outside the church there is no salvation." The words have been repeated by popes throughout the centuries; however, each time they have been clarified to encompass more people who are not actually members of the church but who possess just enough faith or just enough desire to do good that we can treat them as if they were some part of virtual church. Almost no Catholics still literally believe no one is going to heaven but us.

Gibson’s beliefs about many subjects seem to mirror those of the Society of St. Pius X. Also known as Lefebvrists, the members of the society rejected the liberal positions taken at the Second Vatican Council (Vatican II) in the early 1960s and considered Pope John Paul II heretical (though even the Lefebvrists are more liberal than Gibson about who's going to make it into heaven). Four bishops of the society were excommunicated in 1988. A scandal recently erupted when Benedict XVI lifted the excommunication of the bishops, who turned out to include a Holocaust denier. (Gibson’s father, Hutton Gibson, is also a Holocaust denier and claimed in a New York Times Magazine profile that Mel considered Pope John Paul II an "ass.")

Gibson’s alliance with traditional Catholics for whom the old Latin Mass is the only valid Mass led to his building a church on his own property that adheres to the Tridentine (pre-Vatican II) rituals and ultra-traditional Catholic views. And now Gibson will confront the consequences of his beliefs.

It will be interesting to see what course of action Gibson takes regarding one of the most controversial matters of church law -- seeking an annulment. Gibson is opposed to divorce. He accepts the view that the sacrament of marriage is indissoluble. He and his wife may get a civil divorce, but Mel will still, in the eyes of the church, be married. Conservative or liberal, the only way a Catholic can remarry in the church and receive the sacraments is to seek an annulment. Most Catholics find the procedure demeaning and hypocritical. A local church marriage tribunal decides that impediments existed at the time of the marriage that made the union not a sacrament. The most common reason annulments are granted in the U.S. is that one or the other partner exhibited "a grave lack of discretion of judgment." Even if you were married for 28 years and had seven kids, like Gibson, tribunals can decide you were too immature when you got married and therefore it "didn’t take." You were never really married. No sacrament of marriage means you can get married again to someone else.

Divorced Catholics who seek annulments tend to fall into two camps. Some are practical and close their eyes to the hypocrisy, make up an acceptable reason, take the annulment and move on. They are desperate to remarry in the church and have a Catholic family life. Some find the hypocrisy hard to swallow. Women, especially, feel like the church is telling them they were having illicit sex and their kids are illegitimate. The feisty ones appeal to the Vatican. Sheila Rauch Kennedy appealed the 1996 Boston Diocese tribunal’s decision to grant her husband Joseph Kennedy, the son of Robert Kennedy, an annulment on the grounds they were immature. She said it wasn't true. In 2007, the Vatican agreed with Rauch Kennedy and reversed the annulment.

No one, even Mel Gibson, should need to go through such hypocrisy. If the church could figure out a way to redefine "outside the church there is no salvation," to forgive Galileo, to abolish limbo, it can certainly find a way to recognize that valid marriages fail and let people move on to new relationships with dignity.