Congress needs to investigate the reasons behind the economic collapse -- the way Ferdinand Pecora probed the '29 market crash, and made tycoons confess their financial sins. 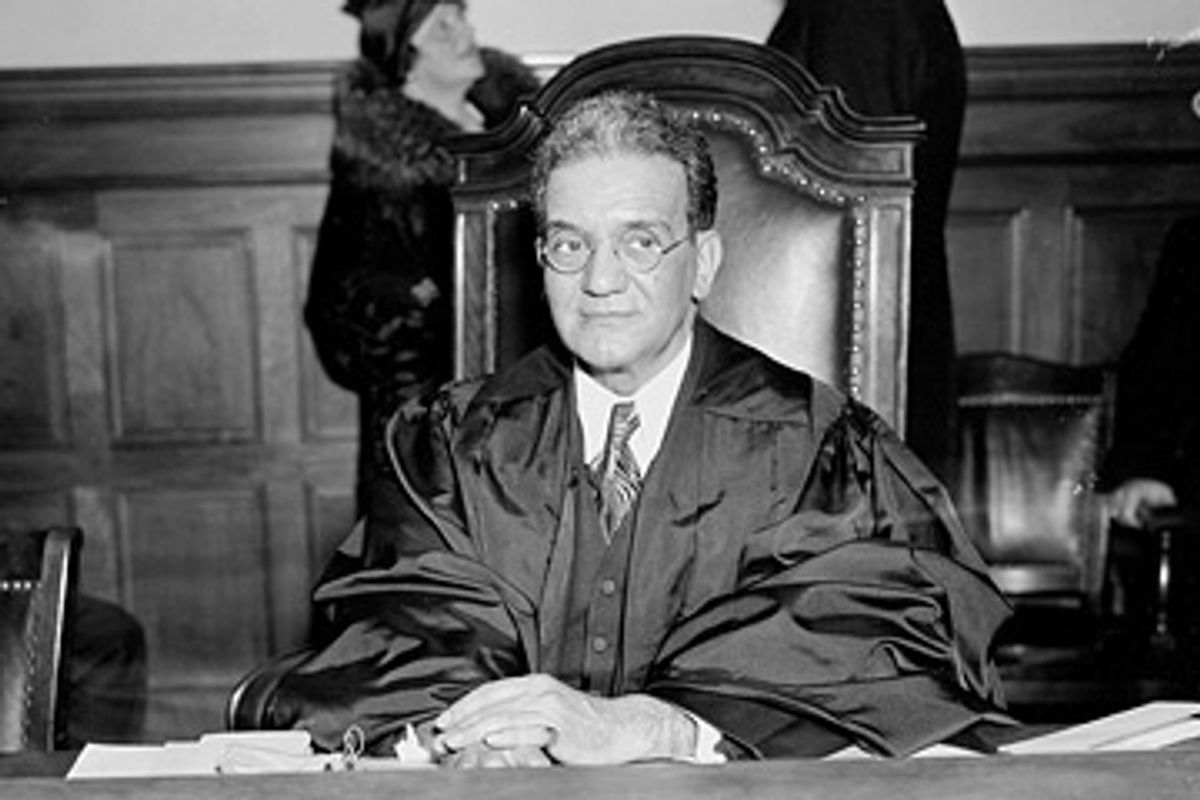 For policy wonks near and far, the celebrity of the hour isn't Susan Boyle, the Scottish church marm who belted out "I Dreamed a Dream" with the voice of an airy angel, or ex-Somali pirate hostage Richard Phillips, or Carrie Prejean, the Miss USA contestant from California who's against gay marriage because the Bible tells her so.

No, it's Ferdinand Pecora.

Who he, you may ask, and guess that maybe he once played infield for the Dodgers or sang Faust at the Metropolitan Opera. But back in the '30s, during the depths of the Great Depression, Ferdinand Pecora emerged as an unlikely hero, leading a sensational Senate investigation of what caused the '29 market crash.

Over the last few weeks, public pressure fueled by rage and pain has built for a similar probe of the causes of our current economic collapse, an inquiry that will search for real answers going beyond the hearings that have been held so far -- more heat and wasted fire than illumination. People want to know what really happened, and how we can keep it from happening again.

Congress is finally getting the message. Last week, House Speaker Nancy Pelosi told a crowd at San Francisco's Commonwealth Club, "I want to initiate... the equivalent of what happened in the '30s. They had something that was called the Pecora Commission," and this week the Senate passed two amendments to anti-fraud legislation, one calling for an independent investigation, similar to the 9/11 Commission; the other for an internal select committee -- like the Senate's Watergate hearings in 1973.

All of this has arisen not only from the public's anger but renewed interest in what happened when Ferdinand Pecora took the job as chief counsel to the Senate Banking Committee in 1933. He was a street-smart immigrant from Sicily, the son of a cobbler, a former Manhattan assistant district attorney with a memory for facts, figures, dates and names that proved the undoing of a Wall Street banking world gone berserk with greed.

Under threat of subpoena and under oath, one tycoon after another -- including J.P. Morgan, Jr., of the House of Morgan and Charles "Sunshine Charley" Mitchell, chairman of First National City Bank (now Citigroup) -- was hauled before the committee and grilled relentlessly by Pecora.

In June 1933, he even made the cover of Time magazine. "Wealth on trial" reads the headline inside, where the investigator was described in ethnic stereotypes of the day as "the kinky-haired, olive-skinned, jut-jawed lawyer from Manhattan." To their shock, the pompous financiers, unaccustomed to having their actions or integrity questioned by anyone, much less some pipsqueak, foreign-born legalist who made 255 dollars a month, were no match for his cross-examination skills.

They found themselves confessing to a litany of financial sins, including discount stock offerings to VIP "preferred" customers (among them, banker cronies, Charles Lindbergh and General "Black Jack" Pershing, as well as Washington insiders, including former President Coolidge and a Supreme Court justice), repackaging bad loans and selling them as bonds to the unsuspecting, and non-payment of income tax.

The Pecora hearings resulted in 12,000 pages of transcripts that are still a primary source for historians of the Great Crash, and important New Deal legislation that for the first time regulated the high-handed, free-wheeling banking industry and protected the public from its excesses -- including the Securities Act of 1933, the Securities Exchange Act of 1934 (which established the Securities and Exchange Commission -- Pecora was one of its first commissioners) and the Glass-Steagall Banking Act of 1933, which erected a firewall between commercial and investment banking -- a wall torn down during the Clinton administration, leading to much of our trouble today.

A biography of Ferdinand Pecora is being written by Michael Perino, a professor of securities regulation at St. John's University. He was interviewed on this week's edition of Bill Moyers Journal, along with Simon Johnson, the former chief economist at the International Monetary Fund who now teaches at MIT's Sloan School of Management.

Reading the transcripts of the Pecora hearings, Perino told my colleague Bill Moyers, "You can't help but hear the echoes of what's going on today."

Simon Johnson noted that right now, "These financial issues are complex and just like Mr. Pecora did, you need to find some way to crystallize it." He suggested that for a 21st century version of the Pecora hearings to succeed the focus should be on "predatory practices," especially the marketing of home mortgages and credit cards. Perino adds that another important area of inquiry would be "the role that credit agencies played in this entire process, particularly in the creation of... derivative instruments."

As plans for a real, Pecora-style investigation emerge, three things seem clear. A general counsel and staff must be engaged who possess a bulldog tenacity and legal skills similar to Pecora's. "You have to have a strong general counsel," Johnson said, "who asks the tough questions and who doesn't let you off the hook. You've got to push it through."

Some have suggested Elizabeth Warren, Harvard Law professor and current head of the Congressional Oversight Panel overseeing the Troubled Assets Relief Program -- TARP. As Johnson notes, "She comes with expertise... the right combination of qualifications," but perhaps lacks the prosecutorial ability necessary. Patrick Fitzgerald, the Federal prosecutor in the Scooter Libby and Rod Blagojevich cases has been mentioned.

Another possibility: New York State's ambitious Attorney General Andrew Cuomo, who has been an outspoken critic of Wall Street and Washington during the current crisis. Just this week he sent a letter to the Senate and House banking committees detailing allegations that Bush Treasury Secretary Hank Paulson and Fed Chair Ben Bernanke forced Bank of America's merger with Merrill Lynch.

Second, an independent commission with subpoena power is the way to go; not yet another congressional investigation led by Senators and Representatives who have received political contributions from the very companies they'll be hauling in for questioning. As the non-partisan Center for Responsive Politics has reported, for the last 20 years, the financial services industry has been the largest campaign contributor in every federal election cycle. In the last two years alone, individual and political action committee donations from Wall Street totaled $463.5 million.

This creates, Simon Johnson said, "a potential conflict of interest. I think that's why setting up an independent, bipartisan commission with various... technical experts, people with a deep background in finance... makes sense.

"... Really drilling down is going to show you perhaps some things that were criminal, I'm not saying very many, but a lot of things that when you shine this light on them -- a very, very bright light -- they look inappropriate, unethical, or at least [are] things we're not comfortable with going forward."

Finally, unlike his opposition to an independent commission investigating allegations of torture, President Obama needs to get involved immediately and publicly back an independent Pecora-style commission's work. According to Michael Perino, "Roosevelt was a big booster for the [Pecora] hearings. He met secretly with Pecora on a number of occasions," as well as the committee chairmen.

Obama, on the other hand, may have spent too much time around University of Chicago free market economists when he taught constitutional law there. He seems more inclined to salve the egos of financial titans than to challenge them, and he's clearly smitten with his chief economics adviser Larry Summers, who struck it rich on Wall Street, and with the likes of Robert Rubin, who appears to have spawned half the people Obama has put in charge of the banking crisis. Summers and Rubin were both, ahem, witnesses at the execution when Glass-Steagall was pushed out the window.

Nonetheless, President Obama "is the key to the whole situation," Simon Johnson said; he has to insist on "a lot of openness." Michael Perino noted, "There's got to be strong political support behind these hearings or they're likely to devolve into an academic exercise that doesn't accomplish very much."

It may already be too late. Simon Johnson says the banking industry is pretty confident they're already won. "They got the bailout, they got the money they needed to stay in business. They got a vast line of credit from the taxpayer," he said. "... Their position is, 'Look, if you want a recovery, if you want to get your economy back, you gotta be nice to us.' I'm afraid that the government has blinked...

Ferdinand Pecora, a nation turns its lonely eyes to you.