The right floats off to Neverland. No girls allowed!

In Texas and elsewhere, conservatives soothe the pain of electoral rout with dreams of secession -- and of magical nerd kingdoms. 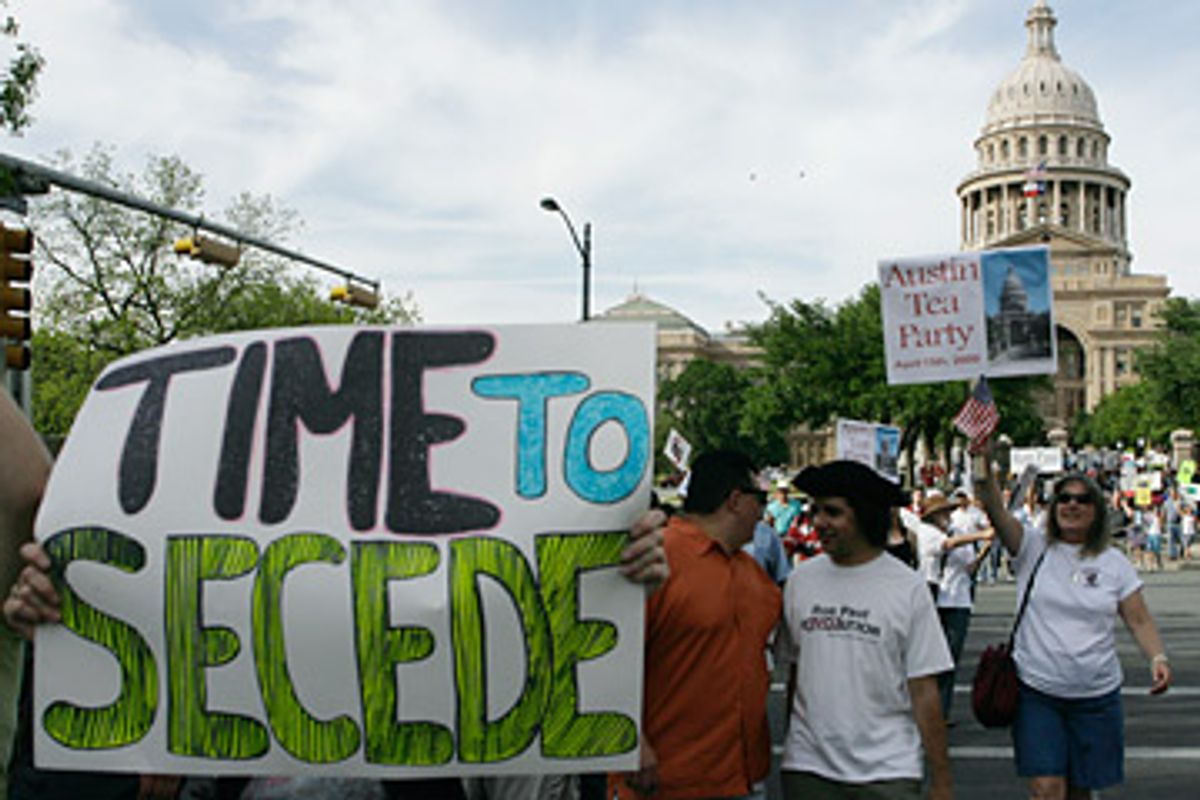 Is it secession, then? Tell me, sir -- is it war? At a faux populist, or rather Fox populist, "tea party" in Austin on April 15, Texas Governor Rick Perry warned that "we've got a great union. There's absolutely no reason to dissolve it. But if Washington continues to thumb their nose at the American people, you know, who knows what might come out of that. But Texas is a very unique place, and we're a pretty independent lot to boot."

Will my native state say to the United States what Governor Perry was once caught on tape saying to a journalist: "Adios, mofo"? I hate to be the bearer of bad news, but the other 49 and the District of Columbia should not get their hopes up yet. Perry is unlikely to declare the restoration of the Republic of Texas.

By flirting with the language of treason, the governor, who faces a tough primary challenge from the more moderate Kay Bailey Hutchison for the 2010 Republican gubernatorial nomination, was simply pandering to the base of the Republican party in Texas. In my childhood that base consisted of transplanted Rockefeller Republicans from the Northeast who were more liberal than many Texas Democrats. Today the Texas GOP is defined by the political descendants of the Confederates and the segregationist, anti-New Deal Dixiecrats, with a healthy admixture of militia types who worry the enlargement of Interstate 35 is part of a UN conspiracy to create a NAFTA Superhighway. They could be compared to dinosaurs, if only dinosaurs were not a figment of the imagination of Darwinists and other liberals.

But Perry is also thought to be considering a run for the presidency, and his secessionist rhetoric would play just as well with the GOP base outside of Texas. Since Ronald Reagan nobody has been able to obtain the Republican nomination for the presidency without vilifying the U.S. government in terms that would please the late Jefferson Davis. But like the original Confederates, today's neo-Confederates don't really have any objection to the federal government -- as long as they control it. It's only now that they have lost a couple of elections that they are pretending to discover that the government recently run by George the Second was a tyranny worthy of George the Third. The inauguration of Barack Obama has occasioned an outbreak of separatist posturing on the right, most of it fundamentally insincere, all of it petulant and juvenile.

For example, on April 6, a week before Rick Perry publicly contemplated the secession of Texas, Patri Friedman, the grandson of the free-market fundamentalist economist Milton Friedman, published an online manifesto in the libertarian Cato Institute's Cato Unbound, calling on libertarians to give up on democracy in the United States and ... move into San Francisco Bay.

"Democracy is the current industry standard political system, but unfortunately it is ill-suited for a libertarian state," Friedman writes. For one thing, "at most 16 percent of people have libertarian beliefs." Yup, that could be a problem. Friedman concedes: "Libertarians are a minority, and we underperform in elections, so winning electoral victories is a hopeless endeavor."

The solution? Create a new country as tiny and insignificant as the libertarian minority itself. Friedman explains why he and a few others founded the Seasteading Institute: "Seasteading is my proposal to open the oceans as a new frontier, where we can build new city-states to experiment with new institutions. This dramatically lowers the barrier to entry for forming a new government, because expensive though ocean platforms are, they are still cheap compared to winning a war, an election, or a revolution." Can't argue with that.

In addition: "A lower barrier to entry means more small-scale experimentation. Also, the unique nature of the fluid ocean surface means that cities can be built in a modular fashion where entire buildings can be detached and floated away. This unprecedented physical mobility will give us the ability to leave a country without leaving our home, increasing competition between governments." I for one can't wait to see the bidding war for Patri Friedman's loyalty between Atlantis and Lemuria.

The plan is to build and colonize platforms similar to offshore oil rigs. It's worked before. In the 1960s, Roy Paddy Bates turned a pirate radio operation on an abandoned British maritime fort in the North Sea into the Principality of Sealand, which still exists as a tourist trap. Like Friedman, the founders of microstates generally are not big on democracy as a form of government. Bates anointed himself Prince Roy of Sealand, while a Western Australian wheat farmer who declared his own Hutt River Principality installed himself and his wife as Prince Leonard Casley and Princess Shirley. Prince Patri of Seastead? Unfortunately, today as in the past monarchs still wage war over the control of tiny domains. When a Las Vegas millionaire, Michael Oliver, tried to create the Republic of Minerva by building an artificial island near Tonga, he was thwarted by none other than the king of Tonga himself.

It appears that Prince Patri's proposed new sovereign country or countries will be in or near San Francisco Bay, so that the hardy pioneers can enjoy the nearby amenities provided by the continental nation-state they despise, without paying taxes for them. Not to mention the fact that these affluent people in their offshore gated community would be free riders on U.S. military security. If they really love independence, let these democracy-despising secessionists sink their anchors off the coast of Somalia and fend off pirates without the assistance of that despotic institution, the U.S. Navy.

Patri's Seastead Institute has received funding from Paypal founder Peter Thiel, who also funds the Methuselah Foundation, which seeks to end aging and make everyone immortal. In a companion essay on April 13 on Cato Unbound, Thiel endorses Friedman's rejection of democracy: "I stand against confiscatory taxes, totalitarian collectives, and the ideology of the inevitability of the death of every individual [!]. For all these reasons, I still call myself 'libertarian.'" He goes on to say that "I no longer believe that freedom and democracy are compatible." Why is democracy incompatible with freedom? According to Thiel, one problem with democracy is that women have the right to vote: "Since 1920, the vast increase in welfare beneficiaries and the extension of the franchise to women -- two constituencies that are notoriously tough for libertarians -- have rendered the notion of 'capitalist democracy' into an oxymoron." What could more beautifully illustrate the pubescent male nerd mentality of the libertarian than Thiel's combination of misogyny with the denial of aging and death? We had a nice John Galt libertarian paradise in this country, until girls came along and messed it up!

Thiel continues: "In our time, the great task for libertarians is to find an escape from politics in all its forms -- from the totalitarian and fundamentalist catastrophes to the unthinking demos that guides so-called 'social democracy.'" After considering the possible mass migration (if that is not a contradiction in terms) of libertarians to cyberspace and outer space, he opts for Fantasy Island: "The fate of our world may depend on the effort of a single person who builds or propagates the machinery of freedom that makes the world safe for capitalism. For this reason, all of us must wish Patri Friedman the very best in his extraordinary experiment."

Here's an idea. Thiel could use his leverage as a donor to combine the Seasteading Institute with the Methuselah Foundation and create a make-believe island where girls aren't allowed to vote and where nobody ever has to grow up. Call it Neverland. It would be easy for libertarian refugees from the United States and the occasional neo-Confederate to find it. Second star to the right, and straight on till morning.