President Obama must fight back against the former vice president by launching investigations into the Bush administration's interrogation policies. 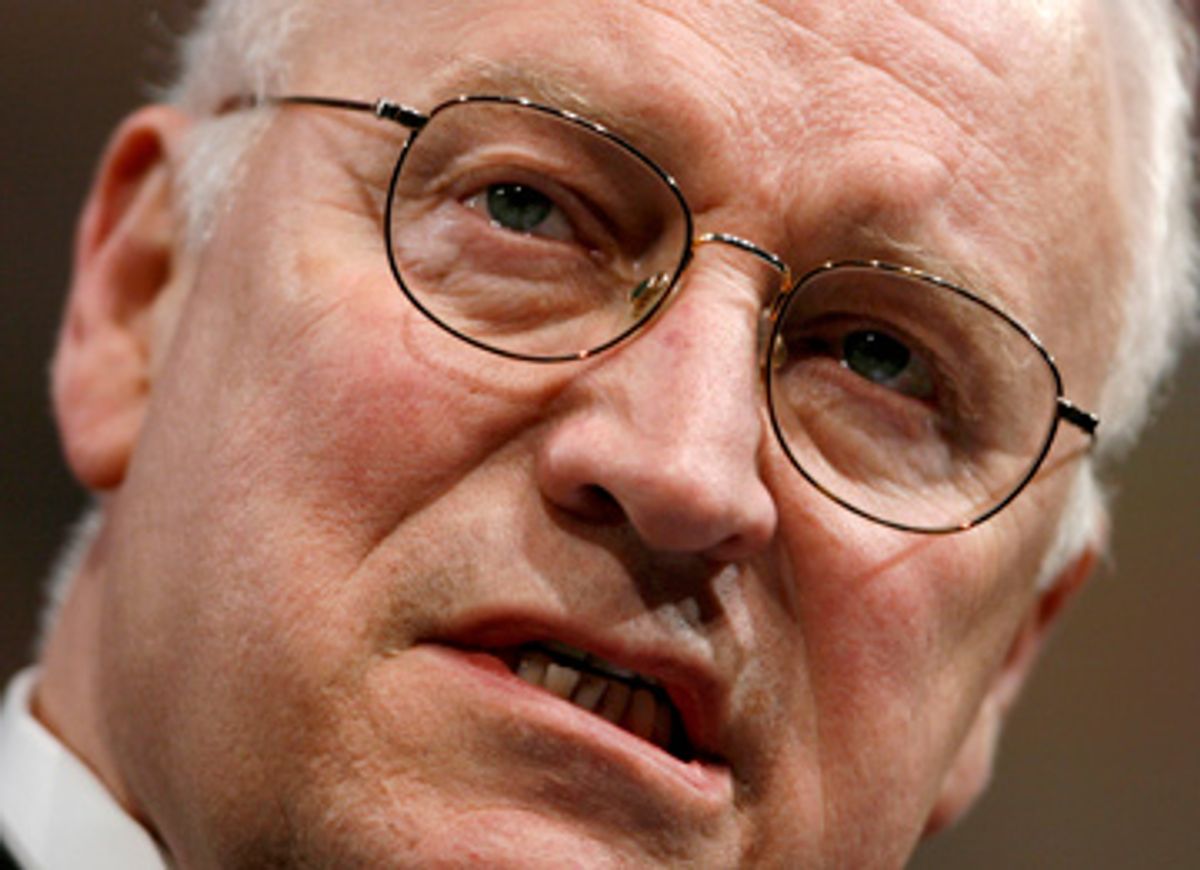 Having stampeded his ill-informed predecessor into a series of catastrophic blunders, it appears that Dick Cheney has declared open bureaucratic war -- the only kind he's ever known how to fight -- upon President Barack Obama. After decades of bullying the CIA and other intelligence agencies to affirm his crackpot worldviews, he's trying to pull the same routine on the White House to redeem his own shattered reputation. Or is it something more sinister?

As the longtime leader of the Republican Party's Chicken Little faction, Cheney's career testifies to his skill at backstairs intrigue. Longtime allies have speculated that his health problems, followed by the 9/11 attacks, drove him around the bend. Gen. Brent Scowcroft, national security advisor to two GOP presidents, told the New Yorker, "I don't know him anymore."

Col. Lawrence Wilkerson, Colin Powell's chief of staff, was quoted in Jane Mayer's "The Dark Side" as saying that "Cheney was traumatized by 9/11. The poor guy became paranoid ... I can't fault the man for wanting to keep America safe. But he was willing to corrupt the whole country in order to save it."

A less charitable view might be that maneuvering his way into the vice presidency finally gave Cheney the power to bend the CIA to his will. He'd been pestering the agency to report that the sky was falling since the 1970s, first as an acolyte of "Team B," next the "Committee on the Present Danger" -- well-financed efforts to depict the decrepit hulk of the Soviet Union as verging upon imminent world domination.

After the Berlin Wall's collapse proved that the beleaguered CIA had actually dramatically overestimated Soviet might, Cheney, Rummy, Wolfie and the gang found a new obsession. Styling themselves the "Project for a New American Century," they urged Bill Clinton to invade Iraq in 1999. Next would come Iran, and an American empire from the Mediterranean to the Himalayas.

Perennially wrong, but never in doubt, Cheney and his circle first pooh-poohed the al-Qaida terrorist threat, then panicked after 9/11 -- quickly magnifying a band of stateless fanatics with an appetite for mass murder into yet another existential threat to the nation's survival.

They argued that the real threat to America wasn't Osama bin Laden, but Saddam Hussein, demanding that the CIA produce ironclad evidence that the attacks on New York and Washington were masterminded in Baghdad. Analysts who pointed out that Iraq and al-Qaida were mortal enemies were met with derision, bullying and threats.

According to Mayer's brilliantly reported book, Cheney and his staffers, particularly one David Addington, described by many as "Cheney's Cheney," badgered the CIA to endorse two fixed ideas: that Saddam Hussein possessed nuclear weapons and meant to use them on behalf of Osama bin Laden. The inconvenient fact that no evidence existed only caused them to redouble their efforts.

Thus, it increasingly appears to have been the cause of the United States' sickening descent into torture. Experienced FBI interrogators who'd extracted crucial evidence from captured al-Qaida functionary Abu Zubaydah -- including the identity of 9/11 mastermind Khalid Sheikh Muhummad -- were unable to confirm Cheney's obsessions.

The result, beginning in August 2002, was Justice Department memos dismissing as "quaint" the Geneva Conventions, and authorizing waterboarding, sleep deprivation and beatings falling short of "organ failure and death," specifically against Zubaydah.

It's the timeline that's significant: All this took place precisely as the Bush White House began its 2002 pre-election propaganda campaign urging war with Iraq: "mushroom clouds," yellowcake uranium, and so on.

Was it truth or useful fiction Cheney's thugs were after? Authoritarian regimes have always used torture to secure false confessions.

The FBI, believing the orders illegal, actually withdrew from the investigation -- a development conveniently overlooked by establishment Beltway pundits now bleating like sheep that despite their shamefulness, the "memos on torture represented a deliberate, and internally well-debated, policy decision, made in the proper places ... by the proper officials."

That's the Washington Post's mincing arbiter of propriety David Broder. God forbid we should criminalize decisions made by insiders; better to junk the Constitution than create awkwardness at Washington dinner parties.

Ali Soufan, the FBI agent responsible for questioning Zubaydah, has broken a seven-year silence in a New York Times op-ed asserting there was "no actionable intelligence gained from using enhanced interrogation techniques on Abu Zubaydah."

Equally crucial, Soufan defends his CIA colleagues as "good people who felt as I did about the use of enhanced techniques: It is un-American, ineffective and harmful to our national security."

It's this last that's given observers like me pause. Prosecuting career CIA agents while Cheney does guest shots with Sean Hannity and Rush Limbaugh accusing Obama of weakening America's defenses, all but openly hoping for a successful terror strike with the potential to restore his faction to power, would be a grave moral and political error.

This isn't a fight Obama has wanted, but Cheney's making it one he cannot avoid. Nothing short of a full-scale investigation can cauterize this wound.