Before I give you Salon's Kentucky Derby pick, let's take a moment to remember the just-demolished racetrack outside Chicago, one of the many recent casualties in a fast-fading sport. 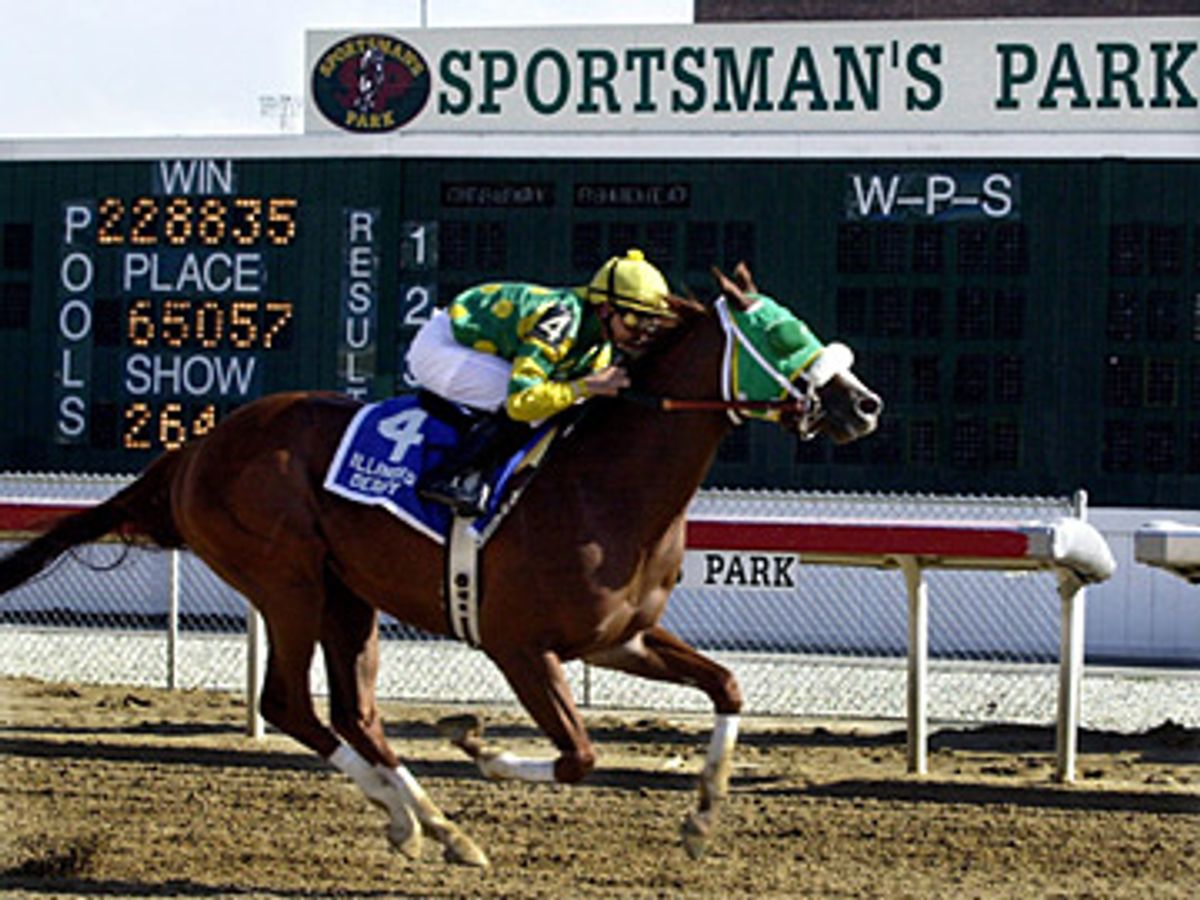 When you watch the Kentucky Derby this weekend, remember that most Thoroughbreds will never compete for a $2 million purse, or run in front of 150,000 screaming horseplayers. Most Thoroughbreds will spend their racing days at tank-town tracks, running every few weeks to pick up four-figure checks that barely cover their feed bills. They'll race at Fair Meadows in Tulsa, Okla., wedged between a minor-league baseball stadium and a water park. Or at the Brown County Fairgrounds, in Aberdeen, S.D., where 13-year-old geldings with swollen knees gallop out their final races as an announcer with a nasal Northern accent intones, "and Raving Cutlet is last of all."

Every once in a while, though, a horse makes it to the big time from one of these bullrings. In 2002, War Emblem won the Illinois Derby at Sportsman's Park, a seven-furlong track located across the street from an oil refinery in Cicero. A few weeks later, in Louisville, Ky., he went off at 20-1, becoming one of the most unlikely of Derby winners, as well as one of the most boring -- he led all the way on a slow pace.

War Emblem's victory was a last triumph for Sportsman's Park, which closed for good a month before that year's Kentucky Derby, adding its name to the roll of small-time tracks that have disappeared over the past decade and a half. Ak-Sar-Ben, 1995. Great Lakes Downs, 2007. Bay Meadows, 2008. The Woodlands, 2009. Thanks to off-track betting parlors, and Web sites that allow gamblers to play the horses from a computer, there's less demand for cheap live racing. If you can bet into the enormous pools at Saratoga, Santa Anita, or Churchill Downs, why waste your money on a track where $100 will mess up the odds?

The bush-league tracks that are turning a profit aren't making their money by taking bets on horse races. Presque Isle Downs, an Erie, Pa., "racino" that opened in 2007, rakes in most of its cash from slot machines. The horses are a floor show. Erie's previous attempts at a race track, Commodore Downs and Erie Downs, both failed because their meager purses attracted only wobbly plugs. Thanks to slots, Presque Isle Downs is paying out nearly as much prize money as Saratoga.

But slots or no, the whole horse-racing industry is reeling. It's in a trough so deep that even a Triple Crown winner might not save it. Before lotteries and casinos, racetracks had a monopoly on legal gambling. Now, a newly opened casino can cut a racetrack's profits by 30 percent. Even big tracks are having trouble making it in this modern gambling environment. Betting on horse races peaked at $15 billion in 2003 and has been stagnant ever since. Interest in horse races peaked more than 70 years ago during the Seabiscuit-War Admiral match race and is now reduced to two minutes on the first Saturday in May. Racetrack owners are losing money even faster than bettors who take tips from the bartender in the Paddock Lounge. This year's bloodletting gives the lie to the old cliché about gambling being recession proof. In March, Magna Entertainment Corp., which operates Gulfstream, Santa Anita, Pimlico and eight other tracks, filed for bankruptcy. (And at least four more North American venues may be headed out to pasture: Les Bois Park in Idaho, Sun Downs in Washington state, Ontario's Fort Erie and Montana's ExpoPark.

Unfortunately, not even slot machines could have saved Sportsman's. It was ruined by one of the worst business decisions in horse racing history.

Charles Bidwill III, the nitwit scion of the same family that has mismanaged the NFL's Cardinals for the past 75 years, thought it would be a good idea to convert Sportsman's to a combination horse racing/auto racing facility, since the car has replaced the horse in the heart of the modern race fan. He spent $60 million to lay down an asphalt racetrack and built an enormous grandstand for the NASCAR crowd.

Horseplayers hated it. Sportsman's suddenly looked like a prison yard. The first year, barbed wire blocked the view of the track. The horses ran on a cushion of dirt spread over the auto racing surface, which caused leg-snapping breakdowns. In Sportsman's final season, track superintendents sometimes spent an hour trying to get the surface ready before calling off the races. One Saturday, I watched a horse belly-flop in the stretch, then heard a fuming trainer declare, "That's it. We're scratching." The rest of the day's races were canceled.

The stock car fans never appeared, either. The big races went to a track in Joliet, closer to the sport's rural base.

On that hard track, front-runners were winning almost all the races. Which was why I didn't think much of War Emblem, who jogged to victory in the Illinois Derby. I bet on Medaglia d'Oro, who turned out to be a much better horse -- he was the runner-up in two consecutive Breeders Cup Classics.

Of Chicago's three racetracks, Sportsman's best exemplified horse racing's seedy glamour. It was started as a dog track by Al Capone, who fixed the races by feeding greasy hamburgers to every greyhound but the one he planned to bet on. Sportsman's sometimes held boxing matches between the races, up on the third floor. I used to see ex-Yankee first baseman Moose Skowron in the grandstand, wearing a jacket advertising his after-the-races tavern, Call Me Moose. Racetrack Rosie, a veteran stripper known for her outlandish Derby Day hats, once had her own day at Sportsman's. The track even put her picture on the program cover. And I'll never forget watching a losing gambler race through the bleachers after a bad bet, wailing "I've never had any luck! Not once in 55 years!" Sportsman's was the mingled stench of cigarette smoke, horse manure and the newsprint of a fresh Daily Racing Form.

The town of Cicero bought Sportsman's Park for $18 million in 2003. For years, the track rotted. Shingles slid off the roof. Weeds garnished jagged cracks in the asphalt. Finally, this January, backhoes began demolishing the old grandstand. As of last weekend, nothing remained of Sportsman's but one of the entrances. Once it's crushed to rubble and carted away, Sportsman's will become a shopping center.

Salon Derby Pick: DUNKIRK. It's true that no horse has won the Kentucky Derby without running as a 2-year-old since 1882. But last year, Big Brown proved that a lightly raced horse can beat more seasoned competition. Dunkirk made the most explosive move I've seen all year on the second turn in the Florida Derby. He couldn't sustain his rally, but the horse who beat him was Quality Road, who is the best of this year's 3-year-old class and would be the Derby favorite if he hadn't been withdrawn because of a quarter crack. Dunkirk has the second-highest Beyer Speed Figure in the field and stands to improve on Saturday. I will bet Dunkirk to win, with exacta savers of I Want Revenge and Friesan Fire over Dunkirk.