Obama drops in on briefing to announce Souter retirement

The president confirmed that the Supreme Court justice will step down, and discussed his criteria for choosing a replacement. 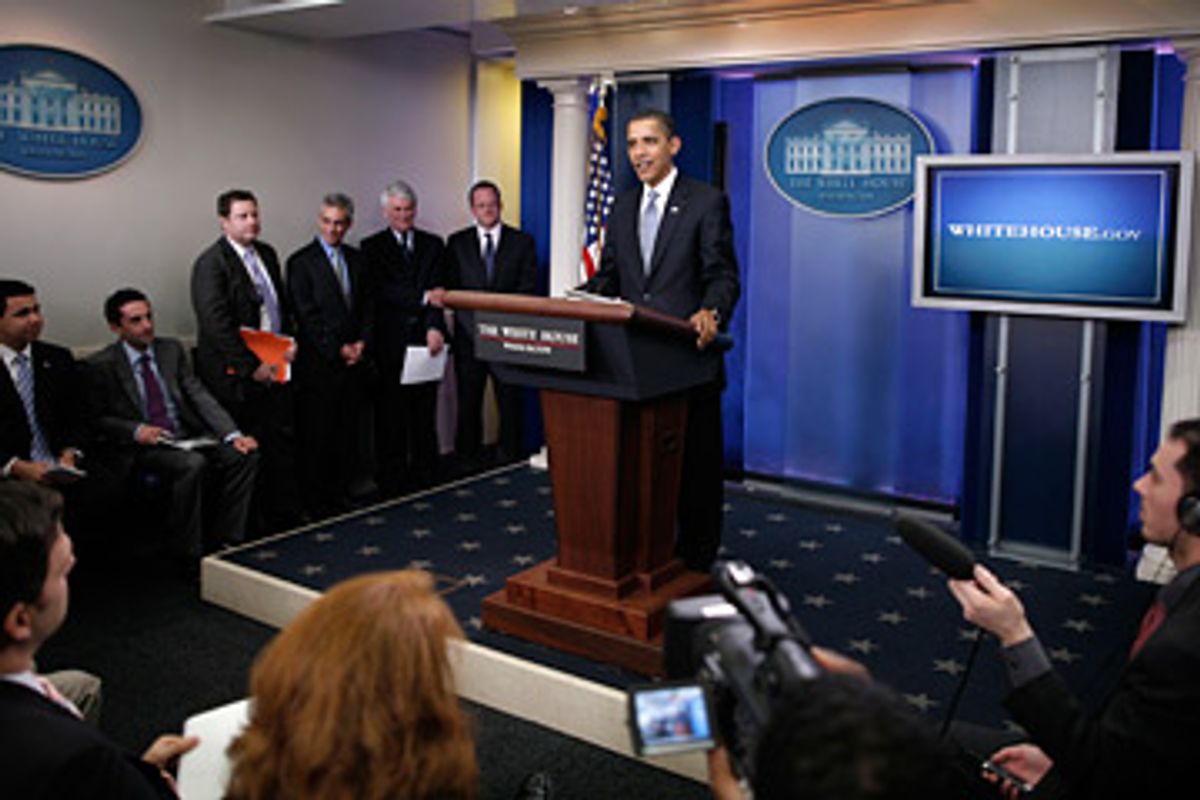 White House Press Secretary Robert Gibbs and the reporters who'd gathered for his daily briefing on Friday afternoon got a little bit of a surprise: An unannounced visit from President Obama, who interrupted the proceedings to say he'd spoken with Supreme Court Justice David Souter, who confirmed that he does plan to retire. Obama also discussed the criteria he'll use in choosing Souter's replacement, saying he wants "someone who understands that justice isn't about some abstract legal theory or footnote in a casebook; it is also about how our laws affect the daily realities of people's lives."

Gibbs had spent most of the press conference telling reporters that the White House had not yet heard any word from Souter. But then he was stopped by the president, who joked, "If there's a job to do, you've got to do it yourself," and then, once he took to the podium, quipped, "This is kind of cool, Robert."

Obama went on to read a statement:

I just got off the telephone with Justice Souter. And so I would like to say a few words about his decision to retire from the Supreme Court.

Throughout his two decades on the Supreme Court, Justice Souter has shown what it means to be a fair-minded and independent judge. He came to the bench with no particular ideology. He never sought to promote a political agenda.

And he consistently defied labels and rejected absolutes, focusing instead on just one task: reaching a just result in the case that was before him.

He approached judging as he approaches life: with a feverish work ethic and a good sense of humor, with integrity, equanimity, and compassion, the hallmark of not just being a good judge, but of being a good person.

I am incredibly grateful for his dedicated service; I told him as much when we spoke. I spoke on behalf of the American people, thanking him for his service. And I wish him safe travels on his journey home to his beloved New Hampshire and on the road ahead.

Now, the process of selecting someone to replace Justice Souter is among my most serious responsibilities as president, so I will seek somebody with a sharp and independent mind and a record of excellence and integrity.

I will seek someone who understands that justice isn't about some abstract legal theory or footnote in a casebook; it is also about how our laws affect the daily realities of people's lives, whether they can make a living and care for their families, whether they feel safe in their homes and welcome in their own nation.

I view that quality of empathy, of understanding and identifying with people's hopes and struggles, as an essential ingredient for arriving at just decisions and outcomes. I will seek somebody who is dedicated to the rule of law, who honors our constitutional traditions, who respects the integrity of the judicial process and the appropriate limits of the judicial role.

I will seek somebody who shares my respect for constitutional values on which this nation was founded and who brings a thoughtful understanding of how to apply them in our time.

As I make this decision, I intend to consult with members of both parties across the political spectrum. And it is my hope that we can swear in our new Supreme Court justice in time for him or her to be seated by the first Monday in October, when the court's new term begins.

The president concluded with one final joke: "And with that, I would like you to give Robert a tough time again." Gibbs, who'd been shown up a little bit by his boss, took it in stride, saying, "I have an announcement to make. I've been notified that Judge Souter is stepping down from the Supreme Court.I have this from the very highest levels in our government."