There's no justice to leaving eight men on the bench. It's time to move beyond tokenism and make the court look more like America 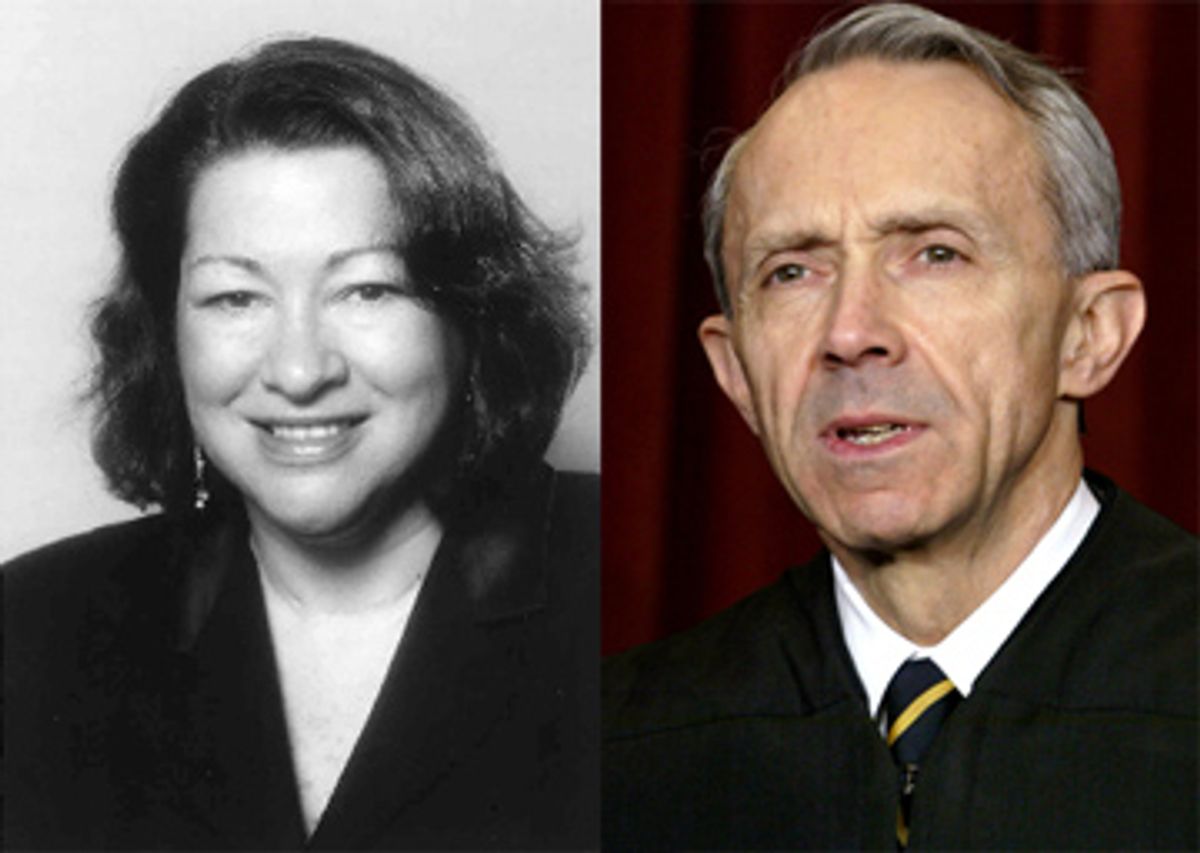 Judge David Souter will be missed. He was never quite the same after winding up on the losing side in the world-changing case Bush v. Gore (in fact Jeffrey Toobin revealed he almost quit the bench over it). I'll always remember his bitter opposition to the majority decision to halt the statewide Florida recount. “There is no justification for denying the state the opportunity to try to count all disputed ballots now,” he wrote. Had Souter prevailed, the world would be a hugely different place. Finally with a Democratic president in the White House, he can go home to New Hampshire.

Souter's departure will give Obama a chance to begin to rebalance the court after George W. Bush's selection of conservatives John Roberts and Samuel Alito tilted it to the right He has many great choices: lawyers and judges who've been shut out of high court consideration for eight years while Bush took a "conservatives only" approach to the courts and the entire justice system.

I stumbled over a line in Mike Allen and Josh Gerstein's Politico story on the battle over Souter's replacement, that because Justice Ruth Bader Ginsberg was expected to be the first departure (she has pancreatic cancer), "the unofficial lists of potential nominees are topped by women." It sounded a little bit like a problem, as if Obama would now have to start over, and assemble a white male list to replace Souter.

In fact, Obama's list should continue to be topped by women, because there's exactly one woman out of the nine Supreme Court justices. I'm sure the Politico boys didn't really mean to confine us to the Ginsberg slot, but there's such a reflexive sense that justice today is fulfilled by tokenism, when it comes to women and minorities – we'd never expect to find them well-represented, or God forbid, in the majority.

Except, of course, women have made up the majority in many leading law schools for a while now. I would never suggest that's a reason to discriminate against men in Supreme Court choices; let's just say no president has had a better choice of female picks than Obama does. (Poor George Bush seemed to think he had no qualified conservative women to choose from, after his selection of Harriet Miers bombed.) It would also be important to add a Latino to the bench, which is why so many people are suggesting Judge Sonia Sotomayor, who grew up in a Bronx housing project and is now on the U.S. Court of Appeals for the 2nd Circuit. Diane Wood, who clerked for Harry Blackmun, taught at the University of Chicago Law School and was a Clinton appointee to the 7th Circuit Court of Appeals, would be another great choice. There are plenty.

Republicans are allegedly gearing up for a battle over who replaces Souter. The Allen/Gerstein piece had this fairly hilarious quote from an anonymous "Republican source:" “The GOP obviously does not have much power in D.C. these days, but just like we helped ourselves by opposing the deficit-busting stimulus, opposing left-wing nominees like her is our path back to the majority.” Two noteworthy points there: It's all about their "path back to power," not what's good for the country, and this person actually thinks the GOP helped itself by opposing the stimulus. The party's approval rate is sinking and it already lost one senator -- Arlen Spector -- over its obstruction. If that's the path back to power, Democrats will be in power for a long time.

Whatever the Republicans do, I think it's clear that Obama's oft-repeated commitment to diversity – in race, gender and life experience – points to his picking a woman this time around. I'm hoping the great Ruth Bader Ginsberg will be with us a long, long time, but she deserves a female colleague. At least one.