Hugh Jackman bares his claws, and his buff chest, as a mutant superhero in the first of the big summer action films. 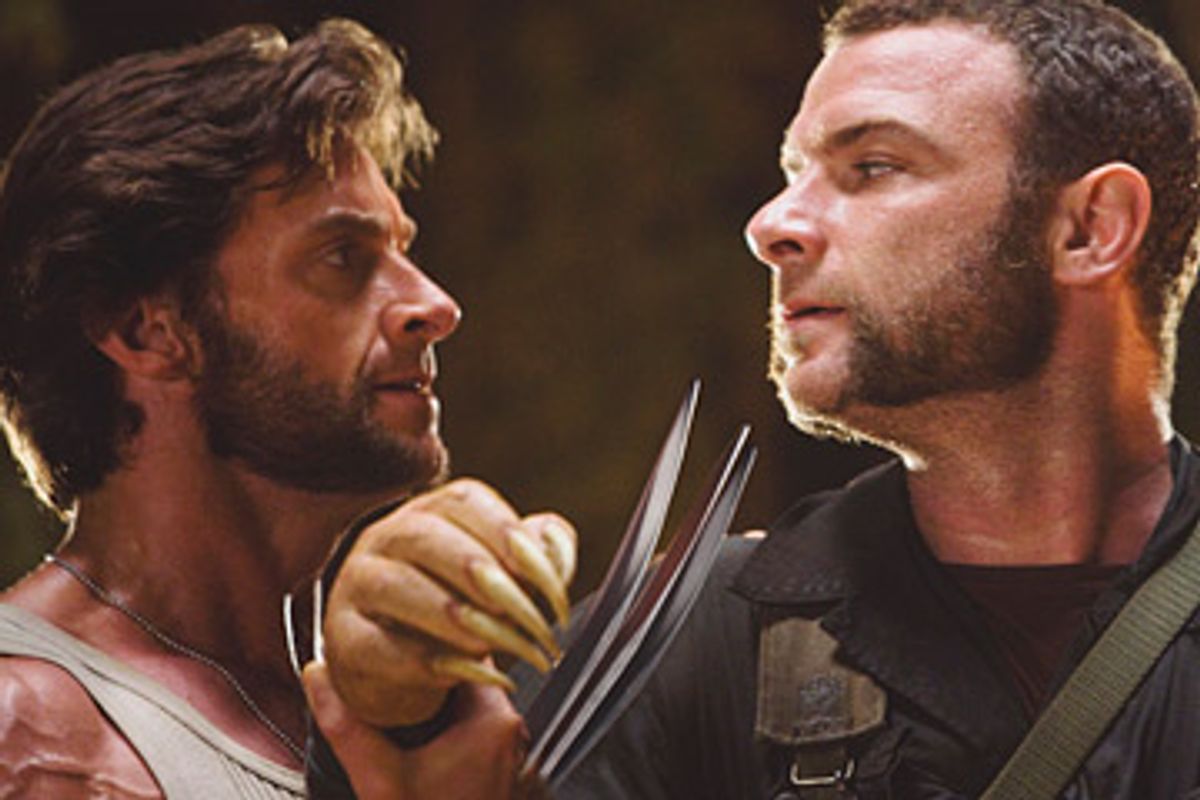 The plot of Gavin Hood's "X-Men Origins: Wolverine" might make perfect sense to you if you've read, studied and memorized the comics that tell the back story of Wolverine, the adamantium-clawed mutant played here by Hugh Jackman. Then again, maybe not. The problem with "Wolverine" isn't that the mythology is detailed and potentially confusing -- you could say that about any number of movies based on comic books, even some of the good ones. The bigger issue is that "Wolverine" is so uninvolving that you might not care whether you remember what happened 10 minutes ago. For a story that supposedly delves into the psychology of a character to help deepen our understanding of him, "Wolverine" doesn't offer much more insight into this feral fighter than did the earlier X-Men pictures -- Bryan Singer's "X-Men" and "X2" or even the messier, more shallow "X-Men: The Last Stand," directed by Brett Ratner. "Wolverine" purports to tell us more and yet gives us less: It's so cluttered and action-packed that the action ceases to mean anything -- virtually nothing the characters do or say results in consequences that stick.

Anybody who's paid even half a blink's worth of attention to the X-Men movies (or who has read the comics, created by Stan Lee and Jack Kirby) knows that Wolverine -- whose real name is Logan -- is a conflicted but ultimately principled character with special and very sharp "gifts" that spring from the knuckles of his hands when he's distressed or angered. "Wolverine" introduces a passel of other characters, including Wade Wilson, aka Deadpool (Ryan Reynolds), who does sort of a drum major act with deadly light-saber batons; John Wraith (Will.i.am, bringing a light, casual touch to the role), who can disappear and reappear in a flash; and Fred J. Dukes (Kevin Durand), a tender tough guy who, unable to lay off the Twinkies, will eventually gain so much weight he'll become known as the Blob. All of these men, in addition to Wolverine, become part of a covert military group known as Team X, which has been put together by Maj. William Stryker (Danny Huston), whose motives are clearly not benign.

One other notable member of that team is Logan's brother, Victor Creed, also known as Sabretooth (Liev Schreiber), and it becomes clear early on that his relationship with Logan is complicated. Yet we never really find out why, or understand why Sabretooth is "different" from Logan, even though he has his own somewhat similar set of strengths (including daggerlike fingernails and the ability to leap and run really, really fast; like Wolverine, he's ageless and virtually indestructible).

"Wolverine" opens in 1845, in the Northwest Territories of Canada, where we meet Logan-Wolverine and Victor-Sabretooth as young boys. Young Logan has just found out he and Victor share the same father -- just as Logan, in a fit of rage, kills the guy. One minute Logan and Victor are boys fleeing through the forest; the next (and all through the opening-credits sequence), they're grown men fighting side by side in various wars: the Civil War, World Wars I and II, the Vietnam War. We get visual clues that Victor-Sabretooth is the more aggressive brother (a trait that's hinted at in that opening scene as well), and we know that Logan, too, is a killer. But it's never clear why Logan and Victor stick together for more than 100 years before having a falling out: You'd think smart, sensitive (if feisty) Wolverine would have figured out sooner that his brother is a vicious loser.

I'm betting the relationship between Victor and Logan is laid out in more detail in the comics. But in "Wolverine," which was written by David Benioff and Skip Woods, the contrast between their natures is never explored, and that's a missed opportunity, particularly when you've bothered to sign on a capable actor like Schreiber. For an "origins" story, "Wolverine" indulges in a surprising amount of lazy shorthand: We're merely asked to accept Sabretooth as a bad guy when surely there must be some complexity behind that devious snaggletoothed smile. But Hood, who previously directed two serious dramas, the 2007 "Rendition" and the 2006 "Tsotsi," doesn't seem to think that matters much. Schreiber is asked to do so little, you wonder why he's even in the movie. So what if his character plays an integral part in the aggressively tangled plot? We never get a sense of who he is: Schreiber does a lot of glowering, and Sabretooth, with the help of CGI, does some cool leaping. But this is a role that could have been played by anybody with a set of prosthetic pointy teeth.

Jackman at least attempts to bring some soul to the picture: At one point Logan returns to Canada to play at being a simple, hardy lumberjack. He has a nice girlfriend, Kayla Silverfox (Lynn Collins), and everything seems to be fine, although sometimes, after a nightmare, he awakens with erect claws instead of morning wood. But his temporarily placid world must, of course, fall apart, and Jackman is good at playing that kind of anguish: He's a sturdy, casual actor who never looks as if he's trying too hard. That serves him well, even in a picture loaded with special effects that seem semi-dazzling while you're watching them but later crumble away to nothingness. "X-Men Origins: Wolverine" is supposed to tell us how it all began, but it leaves out significant details and fills in superfluous ones. Jackman's Wolverine, at least, gives us something to lean on -- as long as we watch those claws.