The $1 trillion game of chicken

The day of the stress test results cometh. We know the banks will need more capital. But how are they going to get it? 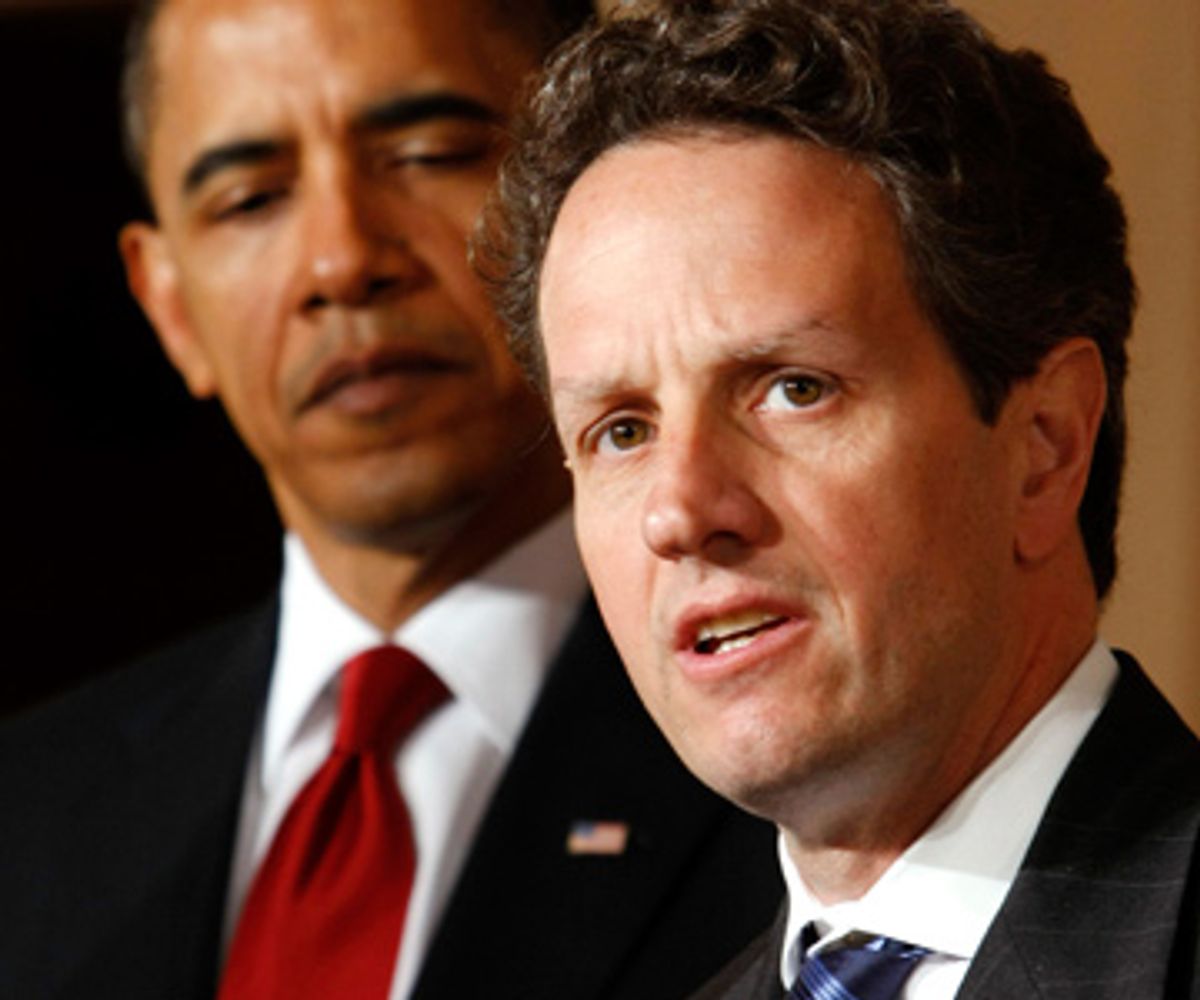 Leak, leak, leak. It's going to be a shock when Thursday rolls around, and we are told the actual, official stress test results. What will the leakers do with themselves then?

In fact, the stress-test regimen appears so far to have eased some of the fears that swept through financial markets in February, just as President Franklin D. Roosevelt's bank holiday did in 1933. He shut down the nation's banks for several days during a banking panic and only reopened those the government deemed safe. One possible explanation for the recent, calmer state of affairs: The problems the tests appear to be uncovering aren't as bad as some analysts' worst expectations.

By my rough estimate, I have written 493 posts on the topic of the banking stress tests since February, and this is the first time I can recall them being favorably compared to FDR's bank holiday. FDR's decision to close the banks came swiftly and suddenly; in contrast, the stress test has been water torture: drawn out endlessly, punctuated by a constant stream of contradictory leaks from the government, and accompanied by a swarm of rabid commentary. Could there really be a crazy-like-a-fox aspect to the government's strategy? By drawing it out, has the government ensured that we all end up desensitized to whatever is ultimately revealed?

Economists Nouriel Roubini and Matthew Richardson published an opinion piece in the Wall Street Journal on Tuesday, arguing that ultimately, the government will have to stop subsidizing the banks. They aren't buying the line that the banks are all solvent -- as their evidence they cite a much-discussed International Monetary Fund study on estimated bank losses on U.S. loans and securities. The IMF puts the total figure of such losses at $2.7 trillion.

Our estimates ... are even higher, at $3.6 trillion, implying that the financial system is currently near insolvency in the aggregate. With the U.S. banks and broker-dealers accounting for more than half these losses there is a huge disconnect between these estimated losses and the regulators' conclusions.

However, The New Yorker's James Surowiecki, after reviewing the same IMF numbers, comes up with a provocative interpretation.

There was one striking number in the IMF report, an estimate of how much money the U.S. banking system would need to become not just solvent but well-capitalized: $275 billion. While that sounds like a big number (at least I hope it does), it's actually much smaller than many of the estimates that people have been tossing around. More important, though (and here's where it gets wonky), what the IMF was estimating was how much "tangible common equity" the banks would need. Tangible common equity has become, of late, everyone's favorite accounting measure for evaluating the health of the banks -- while there are varying definitions, at its core it measures only how much capital banks have raised from common shareholders, and doesn't include things like preferred capital or "mortgage servicing rights." So what the IMF was saying was that the banks needed another $275 billion in common equity to be well-capitalized.

Surowiecki notes that the Treasury can boost the banks' tangible common equity simply by forcing the conversion of the preferred stock the government already owns in the banks as the result of the TARP bailouts, into common stock. Exactly such a plan has already been widely leaked -- the odds are good that Geithner will announce precisely such a strategy on Thursday.

I am not convinced that what is essentially an accounting magic trick could make the threat of bank insolvency vanish. But what does seem clear is that should this scenario play out, the government will end up owning big huge chunks of voting stock in the most troubled banks. And that will set up the real end game. Here's the critical paragraph from Roubini and Richardson's article:

Third, stress tests aside, it is highly likely that some of these large banks will be insolvent, given the various estimates of aggregate losses. The government has got to come up with a plan to deal with these institutions that does not involve a bottomless pit of taxpayer money. This means it will have the unenviable tasks of managing the systemic risk resulting from the failure of these institutions and then managing it in receivership. But it will also mean transferring risk from taxpayers to creditors. This is fair: Metaphorically speaking, these are the guys who served alcohol to the banks just before they took off down the highway.

Transferring risk from taxpayers to creditors means that the the banks' lenders will have to take some kind of haircut -- most likely, they will be forced or encouraged to exchange their debt for equity. But as Roubini and Richardson note, we have just seen, in the case of Chrysler, exactly how hard it is to make a deal with bondholders. They will scream bloody murder. They will complain about the government intervention in the markets and the sanctity of their contracts. They will fight until the last gasp. But the government will have a pretty big card of its own to play -- by virtue of converting its bailout funds into common stock, it will technically be, if not the majority owner of some of the banks, at least a very, very significant influence. With Chrysler, the government signaled that it was not afraid to use its influence and stare down the bondholders. Are we about to see a replay? Who will blink?

It will be, as Roubini and Richardson write, "a $1 trillion game of chicken."