Clash of the self-promotional titans! The "Real Housewives of NYC" end the season going head-to-head in a product-publicity death match. 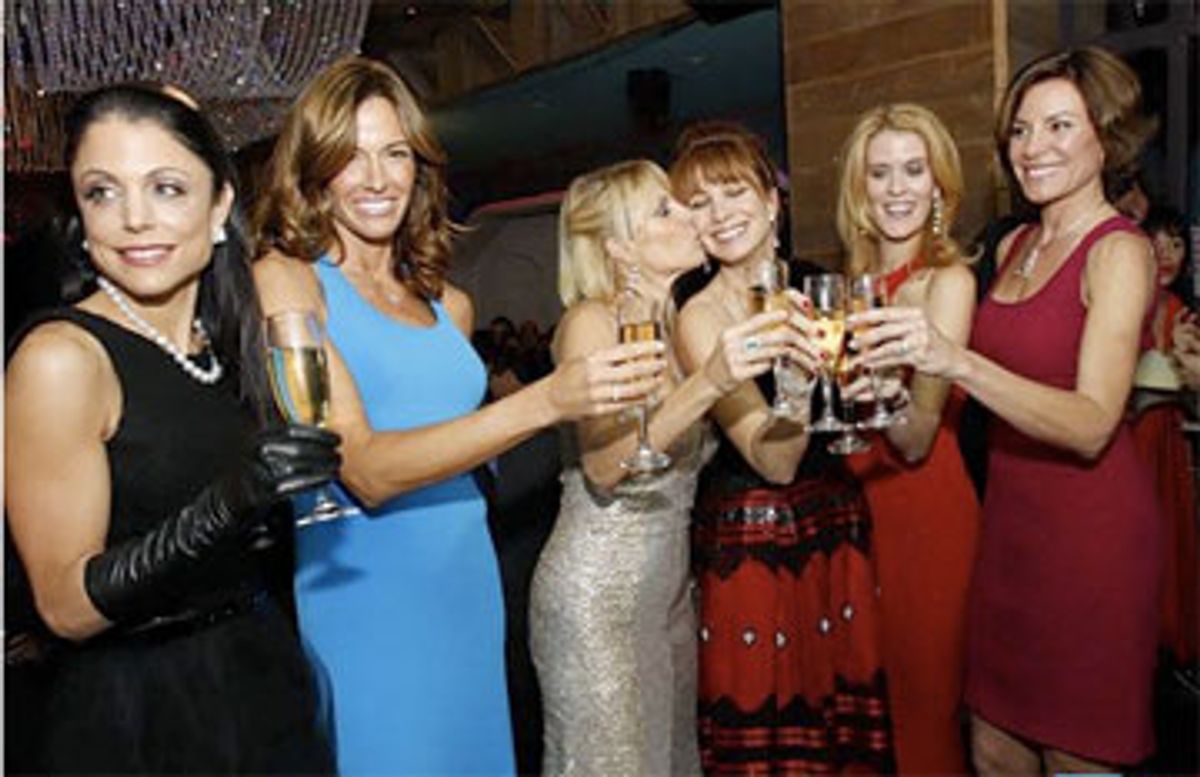 Before we make real friends, we need imaginary friends. And once we stop whipping up pointless conflict with our real friends, we need imaginary enemies: obnoxious, self-involved women who stir up trouble over every tiny bump in their paths. You know, people who remind us of our worst selves -- only meaner, richer, thinner and utterly devoid of shame.

For a few weeks there, Bravo's "The Real Housewives of New York City" was hitting the Imaginary Enemy sweet spot like nothing else. Bad day at work? Nasty Ramona called Bethenny desperate to her face! Unpleasantness with your boss? Did you see LuAnn ship her child off to boarding school, condescend to her house-slave Rosie, then hit the town to prattle on about good manners through a boozy haze?

But the real fun came when Brand New Housewife Kelly Bensimon  -- who's about as close to housewife-dom as a steroids-addled tranny dressed as Doris Day -- busted onto the scene, briefly pretended to befriend Ramona, and then began behaving like the confused overgrown teenager that she is. She ran in traffic! ("I love, like, running in traffic!" she proclaimed, striding along like Jerry Rice in front of a taxi, which inexplicably didn't run her over.)

She refused to lend her name to Jill's charity event, because she, like, never puts her name on anything! (Except for crappy reality shows, bad parties, scandalous Page Six items and really awful books.) To top it all off, she invited Bethenny out for drinks, showed up late, announced "We're not friends, so there!" then pretended to fall in love with a male mannequin she appeared to have hired for the occasion.

Yes, it almost goes without saying that the slow parts of "Real Housewives of New York City" are hopelessly dull: Ramona jabbers on about her age-defying skin treatments; Jill redecorates her living room so that it looks more like a Vegas hotel room (Bethenny proclaimed it "Liberace, Versace, La Cucarach-i"); LuAnn attempts to enrich the lives of some inner-city high school girls, presumably by counseling them on where to keep the good silver; Alex and Simon redecorate their crumbling Brooklyn house to resemble an Amsterdam brothel (Bethenny calls it "gothic bordello").

Sadly, though, it all ended on Tuesday night the way all Bravo shows end, in a spectacular self-promotional implosion. Thus, what began life as a deliciously catty soap opera ended with ... soap. Really perfumey, expensive soap that Ramona "invented" with help from a chemist "friend" to keep everyone (with too much money) looking young(-ish) forever and ever, Amen.

But wait, was it soap, or skin cream, or fine fabrics, or a book about how to blow your nose just like entitled European royalty, or a guide to raising your children so they'll grow up to be French? With so many really important Housewife "projects" to promote, how can anyone keep track?

The housewives themselves certainly can't, beyond declaring everyone else's self-promoting "tacky" while, in turn, self-promoting their own little arbitrary product or ghost-written tome as if it were a piece of their very souls, carved out and distributed for the betterment of humankind. First, Ramona and Jill bicker about whether or not the name of Jill's fabric company should be emblazoned on the backdrop to the red carpet for Jill's event, with Ramona trilling, "It's tacky, Jill! I think it's just tasteless!" Naturally, this quickly devolves into the usual classless "Who's classier?" one-upmanship.

Ramona: You want me to bring you up to the social register?

Jill: Do you know where it is?

Jill: Just tell me where it is.

Next, LuAnn uses an invitation to ring the opening digital alarm at Nasdaq to promote herself and her husband as a couple, which obviously means they're splitsville. Then Jill promotes the notion that she's a good mom to her daughter by briefly asking her if they should have "the talk" -- ­ either the sex talk or the drug talk. Her daughter giggles, Jill giggles, and they both decide not to talk at all. This must mean that Jill has her own parenting book in the works. Then Bethenny goes out for a drink and says "Skinny Girl Margarita" 15,000 times in one sitting. Or was that last week? It's so hard to remember!

And now for the final clash of the self-promotional titans: Bethenny secures free liquor for the big charity event, but apparently it's "totally tacky" (Ramona's words) that the liquor company displays its brand name behind the bar, ­ you know, like they always do at these stupid promotional things. Bethenny's logo (a picture of herself, naturally, in a martini glass) is also there, which would be fine if Bethenny had informed Jill and the other girls of this "branding opportunity." Presumably Jill's fabric and Ramona's jewelry line and LuAnn's book about clipping your toenails just like European royalty could've been promoted up there as well. Instead, Jill says that Bethenny is "ruining my charity event!" Oh, right, charity. Something about anemia? Asthma?

So Bethenny arrives at the set, ­ er, event, and confronts Jill. She's all, Why are you talking shit? You're making Skinny Girl look bad!  And Jill's all, Zarin Fabric totally cannot handle this right now!  and Bethenny's all Skinny Girl needs an apology, immediately! But Zarin Fabric reminds her This is my charity event! (You know, bursitis! Epilepsy!) But then, after Skinny Girl confides to Tru Renewal Skincare that she's angry at Zarin Fabric, Skinny Girl and Zarin Fabric hug and make up, then auction off a bunch of overpriced crap to rich people, right before handing out some classy-looking glass awards to --  themselves.

And then, in a final insult, the postscript updates, i.e., what the Housewives are up to now, have apparently been written by their respective publicists. First there's LuAnn, hugging her (now estranged) husband while she says, in a voice-over, "I think, in the end, life is about seduction." (Doesn't she mean "promotion"?) Sly, yes, but there's still no mention of her impending divorce.

And then there's Kelly's postscript: "The courtroom drama driven by Kelly's latest breakup is finally over. She continues to focus on her beautiful children and writing career."

Courtroom drama? Sweet Jesus. That's all we get? Bravo would dare to sugarcoat even the ugliest battles in our imaginary enemies' lives? That's not what imaginary enemies are for, damn it! That's like selling tickets to a $200-a-head boxing match where the opponents fight for three rounds, shake hands, and then sit around swapping stories about a brand-new, totally safe weight-loss program.