It doesn't matter if they don't stop swine flu. Mexicans love them anyway. 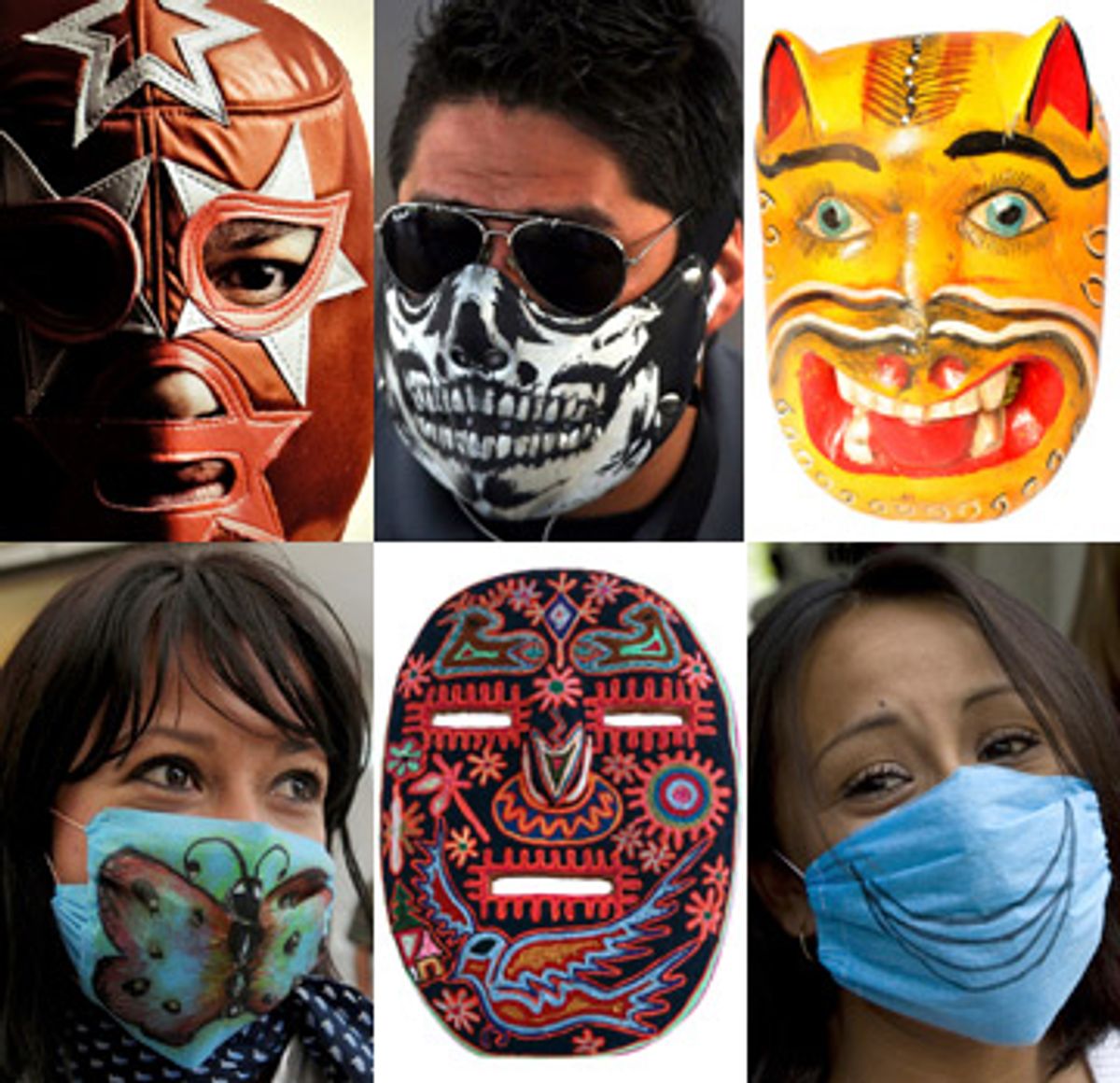 Mexico City is currently enjoying a stretch of beautifully clear, hot days, and the city streets are wonderfully clean and quiet. The schools, movie theaters and sports stadiums are all closed, as are most of the restaurants and local businesses. Fewer cars circulate around the city, and the Metro and city buses are uncharacteristically uncrowded. The only thing that indicates that this is no holiday, however, is the kind of masks people are wearing.

Mexico City has been ground zero for the latest swine flu pandemic. It is the city where the most people have been infected by this deadly virus and where the most people have also already died from it. One of the world's most populated and most densely packed urban areas, the city is a perfect petri dish for cultivating viruses. Physically sealed off from the rest of the world by a ring of volcanic mountains, Mexico City is becoming increasingly isolated as more and more countries cancel flights in and out of the city and chilangos (residents of Mexico City) are no longer welcome in hotels and resorts in other parts of the country. Even if chilangos aren't traveling outside the country so much these days, images of the capital continue to appear on the front pages of newspapers and during prime-time newscasts all over the globe. The images shown, inevitably, are of people wearing face masks.

Mexicans are recognized throughout the world by the masks they wear. The Aztecs are best known for their turquoise or obsidian masks in the shape of hybrid animals or death skulls, and variations of these masks are still used in indigenous and regional festivals all over the country, with masks of devils and skeletons being the most common. Octavio Paz, Mexico's most famous poet, claimed that the national identity was defined by the masks the people wear, the festive ones as well as the social ones (smiles that hide hatred, cheerfulness that hides loneliness). Lucha libre (wrestling) masks are one of the most identifiable export icons of Mexican culture, while the Zapatista mask, worn by a group of indigenous insurgents in Chiapas, became a universal symbol for social protest. The bandannas used to cover protesters' faces during the most violent student and worker confrontations of the last few years are a much-needed disguise to keep police from identifying them and jailing them and their whole family.

In addition to disease and masks, epidemics bring us the viral expansion of conspiracy theories on the Web that no mask or filter can stop. Due to the dissemination of conflicting facts and figures, most people in Mexico doubt the official version and are thus ready to believe just about anything. One theory currently floating around the city is that the unhealthy conditions created by a million pigs living in industrial farms run by the world's largest multinational pig breeder in the state of Veracruz gave birth to this new strain of swine flu. The company had already been accused of polluting the local lagoons, half the town suffered from respiratory illnesses months before the outbreak, and the first person to contract this new strain of virus was a child from this town.

Others believe that the CIA, still controlled by the Bush clan, planted a weapons-grade virus in Mexico City to test its effectiveness, divert attention from possible indictments of high-level officials involved in torture in Guantánamo, generate healthy profits for multinational pharmaceutical companies of which Bush's cronies are major stockholders, and ruin Mexico's economy so that the bailout loans come with a rider demanding the privatization of its oil industry. It wouldn't even be too much of a stretch for them to imagine the outbreak of this deadly virus at the moment it happened as an elaborate plot to assassinate President Obama, as he was given a private tour of the anthropology museum by a man who died of a suspicious case of pneumonia the following day.

Today, with a deadly virus floating around the city and no one really knowing where it came from and how much damage it is doing, chilangos cling to their masks as if their lives depended on it. The intimate, physical greetings that characterized contact between Mexicans, including lots of body hugs and cheek kissing, have already been sacrificed, and chilangos now remain hidden and isolated behind thin masks. Fear of invisible enemies has reached such a point that many people even wear masks they're alone in their cars with the windows down, while others wear them at home by themselves. With so much hysteria, face masks have long been sold out in all pharmacies and stores. Along with flu vaccines, antiviral medicine, antihistamines, antibiotics and any medicine that treats flu symptoms and that people throughout the city are using to self-medicate in this time of crisis, the manufacturing of masks will be one of the few profitable businesses within the city this season.

To most people in Mexico City, these face masks are seen as the last line of defense. The only problem, however, is that the masks don't protect against this swine flu, or any other flu, for that matter, as airborne viruses, being microscopic, can easily pass through paper or cloth. If this information gets out it could cause widespread panic within the city, unless people were also told that, in fact, viruses can only survive in the air a couple of seconds, and it would take a direct hit from a sneeze to infect someone else. So, in the end, the ubiquitous face masks that have come to define the image of this new deadly disease are at best mere fashion accessories, and at worst, when not disposed of properly, a perfect source of infection as viruses do survive up to two days on objects or surfaces.

The Mexican Center for Epidemic and Disease Control is well aware of the limitations of masks, and no one in its offices even bothers to wear them (as one reporter from El Pais recently discovered). Nonetheless, the Mexican government has handed out millions of face masks in an effort to make people feel they are protected and to keep them calm (violent people in masks are the government's No. 1 nightmare). Perhaps, though, this misinformation is a good thing, for without the masks, without any visible image of the possibility of being infected and dying, people wouldn't take the epidemic seriously and wouldn't follow other preventive procedures. Even if most people here knew that their masks were mere props, though, many of them would probably still wear them, as mask culture has always been an essential part of life, and death, in Mexico City.

Kurt Hollander is a Mexico City-based writer, translator, photographer and contributor to the New York Times and the London Guardian Weekly. He is the author of the forthcoming book "Viva la Muerte: Several Ways to Die in Mexico City."