The more the GOP complains, the better Obama looks. 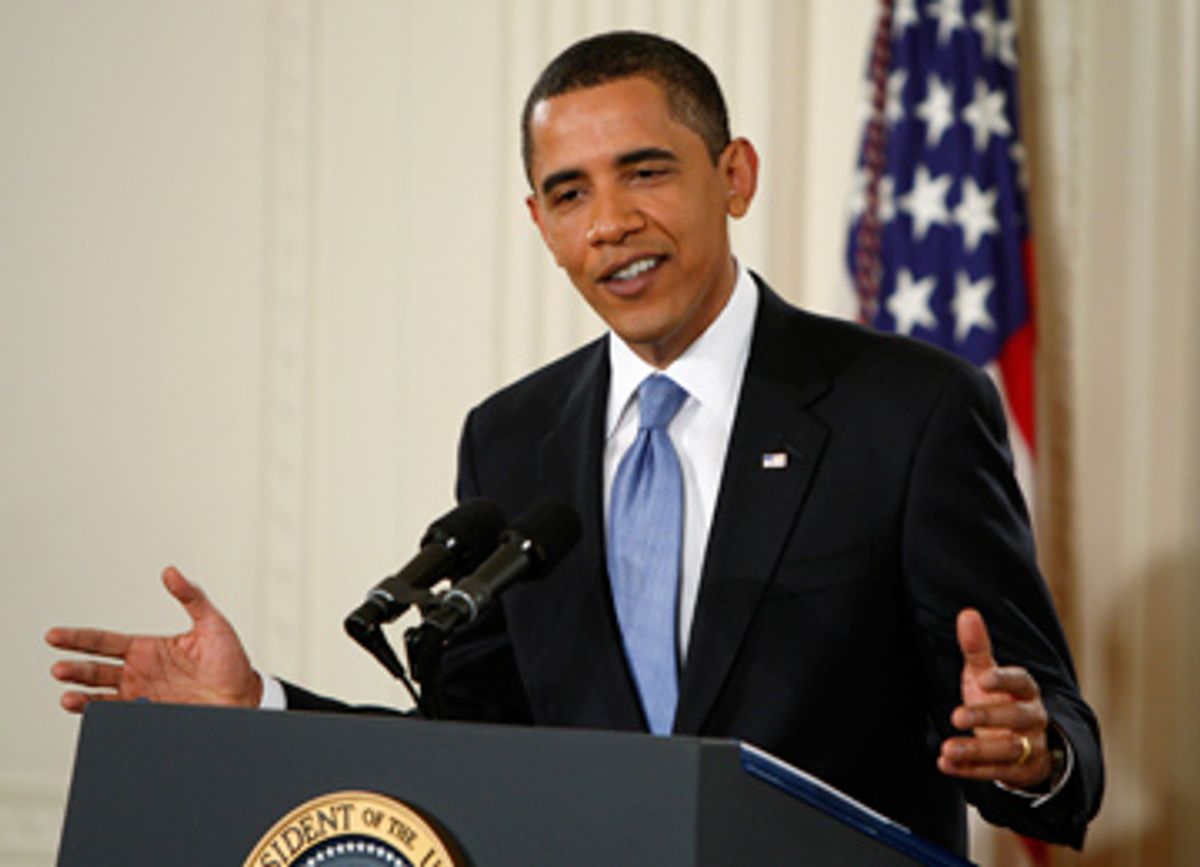 A funny thing happened on the way to the Tea Party. The more furiously the party out of power denounces President Obama, the more confident Americans appear to be that voters made a wise decision last November. That would be the Republican Party. Remember them?

Every time you turn on the television, some Republican is ranting like the kind of barstool know-it-all who gives booze a bad name. Recently it was Tom DeLay, explaining to MSNBC's Chris Matthews that Texas might leave the United States to avoid (imaginary) tax increases. And here I thought the Dallas Cowboys were "America's Team."

After first giving us George W. Bush, then impugning the patriotism of anybody who thought invading Iraq was a bad idea, the Texas Knothead faction loses an election, and then talks secession. DeLay was making it up as he went along, claiming the Obama administration seeks "50 percent to 60 percent tax rates on American citizens." In reality, it seeks a 39.6 percent rate on yearly income over $250,000, tax cuts for everybody else.

It's also nonsense that Texas can divide itself five ways, forcing the United States to accept eight new Republican senators or kiss all five mini-states goodbye. (Would that make Austin the new West Berlin? Which tiny Texas would claim Willie Nelson?) According to the 1846 treaty annexing Texas, partition requires congressional approval. So as tempting as it would be to bid the Five Star State farewell, it's not going to happen.

Then there's Washington Examiner columnist Byron York, who actually wrote that Obama's "sky-high ratings among African-Americans make some of his positions appear a bit more popular overall than they actually are." Got that? Apart from those pesky minorities, real (i.e., white) Americans dislike Obama. York's not a Texan; he's from Alabama.

Meanwhile, Fox News can't decide whether the new president's policies make him a "socialist," a "communist" or a Nazi -- words that once meant very different things, but have now come to signify "I'm a big crybaby who pitches a hissy fit whenever I don't get my way." MSNBC's Joe Scarborough uses similar language. Mediamatters.org keeps a handy "Red Scare Index" for people keeping score at home.

Ironically, the upshot of this crazy talk may be the opposite of that intended. Not only did a remarkable 81 percent of Americans express a favorable personal opinion of the president in a Wall Street Journal/NBC poll, but almost two-thirds support his policies across the board. Asked to describe Obama in a single word, most said "intelligent."

Even more surprising, a recent Rasmussen survey found Americans favoring "capitalism" over "socialism" by only 53 percent. Among the under-30 set, capitalism edges out socialism 37 to 33 percent. Have younger voters decided that since most Americans already enjoy "socialist" water, sewers, trash collection, fire and police protection, highways, public schools, universities, hospitals, Social Security, Medicare and Medicaid, we may as well nationalize private enterprise altogether?

Of course not. The average American could no more concisely define "socialism" than explain the infield fly rule in Sanskrit. But if Rush Limbaugh calls Obama a socialist, maybe a socialist's not such a terrible thing to be.

Regardless of how they label themselves, Americans are mainly pragmatists. Most are leery of abstract dogma. It's their very insistence on ideological purity that makes Republican Knotheads look so foolish. When Obama calmly explains, as he did last week, that he didn't come into office yearning to take over Wall Street and Detroit, people hear him.

"You know, I don't want to run auto companies," Obama said. "I don't want to run banks. I've got two wars I've got to run already. I've got more than enough to do. So the sooner we can get out of that business, the better off we're going to be. We are in unique circumstances. You had the potential collapse of the financial system, which would have decimated our economy, and so we had to step in ...

"With respect to the auto companies, I believe that America should have a functioning, competitive auto industry. I don't think that taxpayers should simply attach an umbilical cord between the U.S. Treasury and the auto companies, so that they are constantly getting subsidies."

Then he put it in terms every garage tinkerer from Ben Franklin to Thomas Edison through Bill Gates would appreciate: "I'm not an auto engineer. I don't know how to create an affordable, well-designed, plug-in hybrid, but I know that if the Japanese can ... then, doggone it, the American people should be able to do the same."

Many in Detroit would say that General Motors and Ford already have. But it's that "doggone it" -- straight out of the Kansas plains -- along with the president's almost preternatural calm and self-deprecating sense of humor, that people respond to.

Most understand that America needs not a theoretician, but a leader.