The dirt on A-Rod

A controversial new biography collects just about every rumor and bad story ever told about baseball icon Alex Rodriguez. But who leaked his drug tests, and what do they mean, anyway? 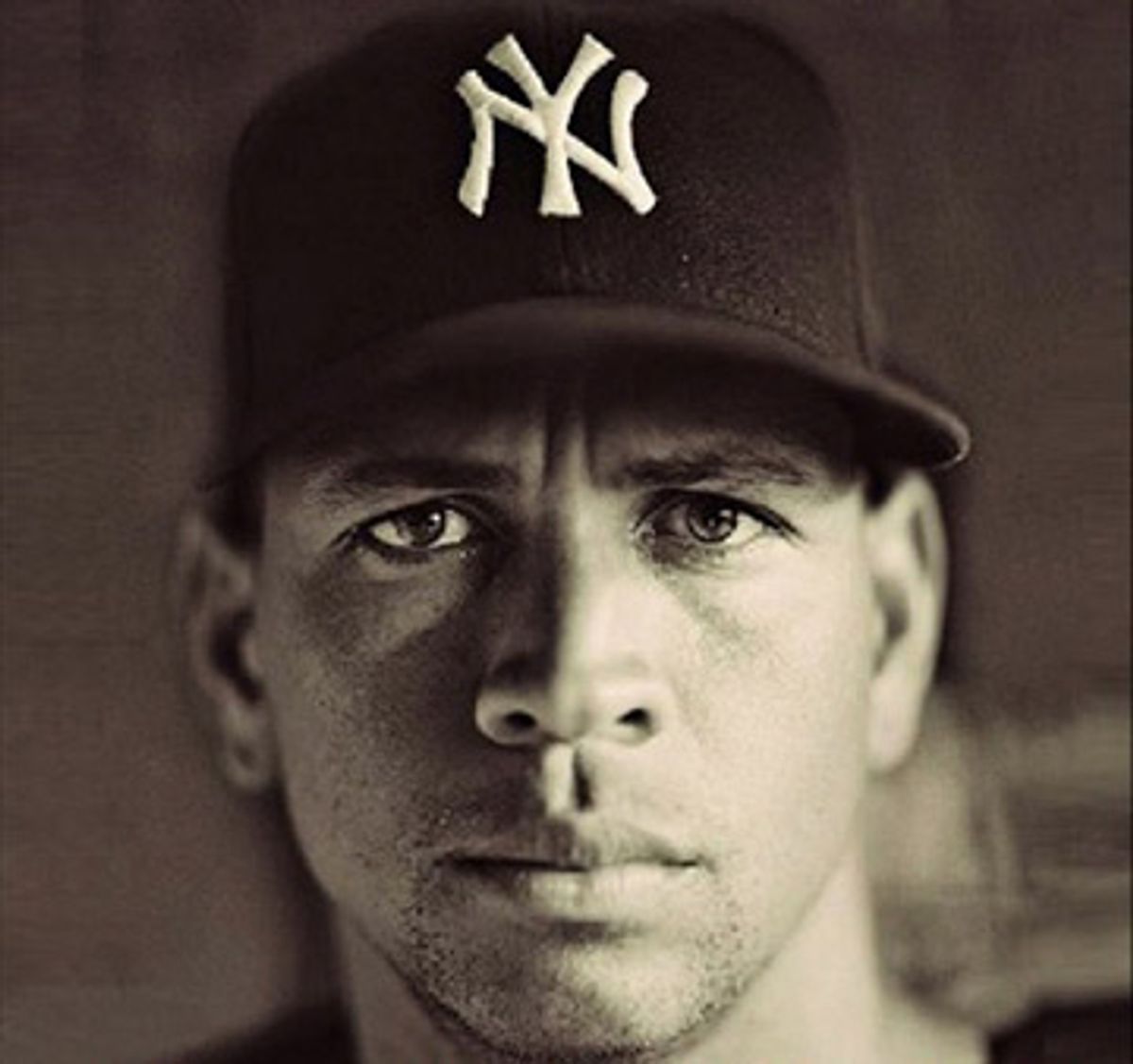 You can read Selena Roberts' "A-Rod: The Many Lives of Alex Rodriguez" in less than four hours, and it reads as if it took about that long to write it. The book is a dud, and much of this can be written off to Alex Rodriguez himself. Despite all the tattle about his sybaritic private life -- he goes to illegal gambling clubs and hangs out with strippers, just as Babe Ruth did 80 years ago -- Rodriguez doesn't seem to have much of a private life. Even the handful of details about his relationship with Madonna mostly involve how serious he is about the Kabbala -- not exactly what checkout line readers want to know.

The press jumped on last week's leaks from the book alleging that, among other things, Rodriguez is supposed to have used steroids as a teenager; the source for that -- the only source -- is Jose Canseco, who says, "I think probably so." (The Dodgers' Doug Mientkiewicz, who knew Rodriguez all through high school, told the Los Angeles Times that the story is nonsense and that "It would be 99.9% impossible for us not to know." )

One serious accusation in the book is that, from his position as shortstop, he "tipped" opposing hitters to the kind of pitch his pitchers were about to throw in return for similar favors when he was at bat. Roberts quotes a couple of players who claim this happened; others, whom Roberts didn't talk to, have recently come out and said that this is ridiculous.

What else was leaked? Oh, yes, the story that Rodriguez was such a prima donna when he was with the Texas Rangers that he made the clubhouse guy put the toothpaste on his toothbrush. Whether he used artificial whiteners to give his smile an unfair advantage isn't mentioned.

How interesting you find numerous other tidbits depends on how much you really want to know about Alex Rodriguez. I could have done without knowing he "can't stand fat people. He really can't be around them." I was mildly amused to find he "liked shopping for Frank Sinatra tunes. He was old school," and that "His wife always ordered for him when they had breakfast." That's at least two things I have in common with baseball's highest-paid player.

Beyond that, "A-Rod" is pretty much a collection of just about every bad story, rumor or innuendo ever told about Alex Rodriguez. Samples: He "snubbed children he had agreed to greet at a Dominican baseball celebration outside Yankee Stadium in 2008." (Apparently his entourage was so big that the kids couldn't get within 20 feet of him.) He "purchased overpriced art from SoHo galleries." Which artists? What prices? At the least we should be informed so we don't make the same mistake.

At least a few of Roberts' sources have gone on record, including a former teammate, Chad Curtis, who said, "I think we should all recognize that things like that [i.e., A-Rod's enormous talent and wealth] can stir up within us jealousy." Most of her sources, though, are anonymous, making it difficult to gauge how much personal animosity colored their statements. Roberts did not speak with Mientkiewicz, who told the L.A. Times, "If you're going to have the guts to come out and say something like that, of that magnitude ... be a man and put your name on it."

Roberts, a former New York Times columnist, is the Sports Illustrated reporter who broke the story that Rodriguez had tested positive for Primobolan and testosterone while he was with the Texas Rangers; he subsequently admitted that he had used the substances all three years he was at Texas, from 2001 through 2003. In terms of criminality, this is petty stuff; at the time, Major League Baseball had attached no penalties to the use of either drug, a point that the media (which has been roasting Rodriguez on a regular basis for  years) hasn't yet realized. The rest of the book seems to be an attempt to build a case that Rodriguez has done something much worse than that, but as in the old Bob Dylan song, nothing is revealed. Almost all of the book's major assertions are unsubstantiated.

Two players supposedly close to A-Rod (they are unnamed, sigh!) claim, "He has used HGH [human growth hormones] while with the Yankees based on the side effects they've seen." Put aside the fact that human growth hormones are not the same as steroids; what exactly are the side effects of HGH? (Roberts never tells us.) And how would these two players be qualified to identify them? The reader is offered no clue.

Roberts seems to know little about the drugs she writes about. As Baseball Prospectus' Will Carroll has tirelessly reminded us, a vast number of substances come under the vague category of "performance enhancing drugs" and only a few are actual steroids. Roberts lumps them all together and makes two general assumptions: first, that all such drugs are bad, a point on which sports physicians are by no means in agreement, and second, that all PEDs actually enhance performance.

Regarding nearly all of them, including the Primobolan and testosterone that Rodriguez admitted to taking, it can be stated that there isn't evidence that they improve baseball performance at all. The Texas Rangers' batting statistics while Rodriguez was on the team were indeed impressive: "The Rangers became an offensive juggernaut, putting up astonishing power numbers. The question wasn't 'What's in the water in Texas?' but 'What's in the bag?'" Roberts doesn't seem to know that the real question is "What's in the ballpark?" The ballpark in Arlington, where the Rangers play, is known by baseball analysts to be one of the best hitter's parks in baseball. Everyone's statistics are inflated there, and Rodriguez's home run totals in all other big league parks while playing for Texas were virtually the same as his road statistics when playing for the Seattle Mariners and New York Yankees. If the drugs increased his power while hitting at Arlington, one wants to know why they had no effect everywhere else.

If Roberts has no insight into PEDs, her understanding of the role and function of the Major League Baseball Players Association is positively nonexistent. Players Association legal counsel Gene Orza is described as "an almost maniacal civil libertarian who defended players even when they seemed indefensible." Does Roberts not understand that it's the right of any union member to due process? Union bashing runs rampant in "A-Rod." Despite the absence of a comprehensive study of so-called PEDs and what their effects are, the union has constantly been ripped in the press for not allowing a random drug testing program to be imposed on them. What union would?

Most irresponsible of all, Roberts accuses the union of warning the players that their drug tests were coming up, an old charge that stems back to the 2007 Mitchell Report on drug use in baseball. If Roberts had bothered to check the basic agreement between the owners and players, she would have found that there was no provision for letting the union know when drug tests were scheduled -- that's pretty much the definition of "random" testing -- and therefore no way the union could have "tipped" players. (As Orza calmly explained to the press when the tipping charge was first made, the union did contact players periodically to remind them that they had not yet been tested.) In any event, the idea that the union could avoid a positive test by alerting a player to an upcoming drug test is silly. Anyone with a rudimentary knowledge of steroids or other PEDs knows that it can take more than a few of weeks for the traces to wash out of one's system.

Roberts never mentions the fact that the tests revealing Rodriguez's drug use were agreed to by the union and Major League Baseball to determine whether a drug policy should be instituted. The tests were to be anonymous, both sides agreed, and if more than 5 percent of the players tested positive, then random drug testing would be implemented throughout MLB. For reasons too complicated to go into here, the samples weren't destroyed and were seized by federal agents as part of their ongoing investigation into the Bay Area Laboratory Cooperative (or BALCO, the steroids manufacturer connected to the Barry Bonds scandal). Whether the feds had a right to take the samples -- most legal experts say no -- is an issue that is still being fought in court. At any rate, agents deciphered the identity code for the samples and put a name to each, then revealed the identities of the 104 players who tested positive to both the commissioner's office and the players union.

So how exactly did Roberts find out about A-Rod's test result? And, equally important, why was this the only name of the 104 to be revealed? Certainly neither MLB nor the union had any reason to divulge information that they had initially agreed to keep secret. It's pretty certain that the only way Roberts could have found out about A-Rod's test results was from the feds, who are still in possession of the test samples. Why would the feds leak the information? Perhaps to have something to show for years of effort and millions of dollars spent.

And, why A-Rod and only A-Rod? That much, at least, is obvious: He's the highest-paid player in baseball history, the one most likely to set the all-time home run record and, so far at least, the only active player known to have studied the Kabbala with Madonna. Roberts seems completely unconcerned that her outing of A-Rod may be a blatant violation of his civil liberties, though the issue of right and wrong here would seem to be at least as clear as most of the ones the Times and their papers have rightly flogged the Bush administration for.