Single-payer "socialist" healthcare is popular with voters, but that doesn't keep the GOP from its pathetic attempts to demonize it. 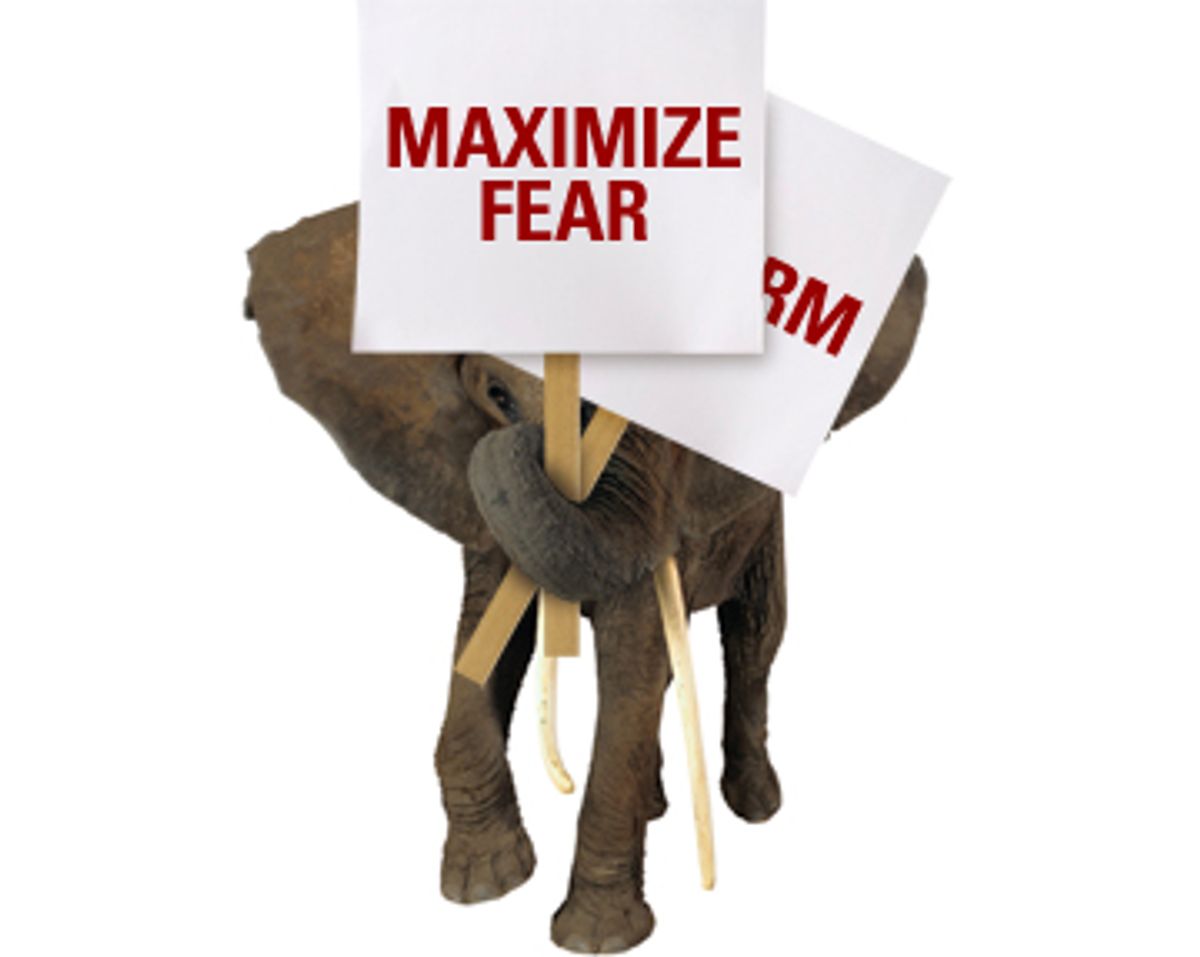 When Frank Luntz intervenes in the debate over healthcare, as he did this week with a strongly worded memorandum addressed to Republicans on Capitol Hill, it is time to prepare for yet another verbal barrage from the right against "Washington," "government," "politicians" and "federal bureaucrats," as well as a few soft words designed to "personalize" and "humanize" the usual right-wing propaganda. In that memo, first reported by Politico, the wily pollster employed the same linguistic patterns, based on the same survey techniques, that he was using several years ago, when he was last seen advising GOP leaders on how to market their campaign for privatizing Social Security.

That didn't work out too well, of course. But dismantling the most successful and popular federal program was far more challenging than blocking any reform of healthcare, a dubious achievement that Republicans and conservatives have maintained for well over half a century. Even so, the content and tone of the latest Luntz memo suggest that preserving the current system will not be nearly as easy as defeating the Clinton reform plan in 1994.

"You simply MUST be vocally and passionately on the side of REFORM," he counsels the Republican caucus, whose members he also lectured in a closed meeting on Wednesday. "The status quo is no longer acceptable. If the dynamic becomes 'President Obama is on the side of reform and Republicans are against it,' then the battle is lost and every word in this document is useless.

While Luntz's purpose is to arm Republicans with the phrases and arguments that will defeat the Obama administration's reform plans, much useful advice for progressives is embedded in his memo as well. Transparently designed to confuse and misdirect the debate, this document exposes the rhetorical traps that the word doctor's dutiful pupils are setting already. (And some of his advice to his clients -- such as railing against "waste, fraud and abuse" and endorsing "preventive care" -- is Beltway cliché at its worst.)

In a typical Luntz language memo such as this one, he commands Republicans to repeat certain words and phrases over and over again, on the humiliating assumption that both they and their constituents will behave like mindless stooges. His underlying aim is to strip words of their meaning to evoke automatic responses -- and to shut down rational thought.

But as his memo indicates, that task is becoming more difficult as the actual conditions that Americans confront grow worse. No longer is it sufficient to deny the reality of crisis in the healthcare system -- and if Republicans continue to do so, the overwhelming majority of the American public that is demanding reform will dismiss them. What Luntz urges his party to do instead is to redefine the crisis not as an existing problem of millions of uninsured families and unaffordable care, but as a looming threat of government medicine run amok.

Maximizing fear is the true message of the Luntz memo: fear of government-run healthcare, fear that bureaucrats will intercede between doctors and patients, fear that those same faceless bureaucrats in Washington will deny lifesaving procedures to helpless people. He urges the Republicans to promote "horror stories" about care delayed and denied in countries with national health insurance. If they heed his advice, we can expect to see ads warning that "your child could die" because government bureaucrats held up a critical operation until it was just too late.

Groping for that fear button, Luntz asked his polling sample, "Which two concepts or phrases would FRIGHTEN you the most?" The first was healthcare rationing, an idea that isn't being contemplated by either the Obama administration or congressional Democrats (although healthcare is rationed by price under the current system). The second was "one-size-fits-all healthcare," a phrase that is devoid of any content but that conjures images of federal regimentation. Third came "healthcare by lobbyist," the plan that has been implemented by the insurance and pharmaceutical industry, with eager collaboration by the Republican leadership, for decades.

"Socialized medicine" came in a feeble fourth, barely ahead of "politicized healthcare," and scaring only about a quarter of the respondents, which demonstrates once again that the S-word has lost most of its terrorizing mojo. ("Hillary-care," presumably included for old times' sake, scares only about 10 percent of voters.)

That widespread tendency to shrug off the specter of socialism reflects a gaping hole in Luntz's methodology. He ignores the simple fact that a substantial portion of the U.S. population already enjoys a single-payer healthcare plan, operated by government officials (in Washington!), and overseen by politicians. We call it Medicare.

That plan, now more than four decades old, is not perceived as an intrusion on the "sacred" relationship between doctor and patient or a threat to quality care -- and yet Luntz presents his arguments abstractly, as if Americans had no experience at all with government involvement in healthcare. According to him, the "best" arguments enunciated by Republicans likewise pretend that Medicare doesn't exist.

So he approvingly quotes Jon Kyl, the second-ranking Republican in the Senate, who warns of dire consequences for the elderly if Washington controls their care: "Imagine needing a new hip that will make it easier to get around, but just because you're over 75, the government denies you that surgery. We can't allow that to happen in America." Actually, Medicare -- that is, the government -- provides hip replacement surgery for elderly patients now.

Basic facts don't seem to faze Kyl -- or Luntz, who features the Arizona senator as his favorite debater against healthcare reform. "Government should not stand between the patient and the physician. The government should not be able to tell you how much care you can get. Nobody in the government should tell you that you can't get a medication that's going to help prolong your life or a treatment that's going to make it easier for you. " Of course, what neither Luntz nor Kyl ever mentions in their portentous allusions to "government" is that private insurance companies constantly do those awful things to their enrollees. Denial of care and denial of coverage are standard industry practices -- as everyone knows, even if the Republican remain in denial themselves.

That raises the most important finding in Luntz's polling, which received far less attention than it deserved. If most Americans no longer despise socialized medicine and may even want a government-run insurance plan, then what does make them angry? As Luntz explains bluntly, they hate the insurance companies. In the introduction to the memo, he notes, "The polling data shows that there is no love lost for insurance companies -- primarily because of their perceived profitability, a lack of accessibility, their lack of accountability, and an excess of bureaucracy." Almost half of the respondents to his poll said that the "worst shortcoming" of the American healthcare system is "not having insurance," followed closely by those who feel the most troubling aspect is "dealing with the insurance companies." Almost 60 percent believe that American healthcare is "too profit-driven."

The ever-cynical Luntz tells the Republicans to attack the insurance companies "almost as much" as they attack government, but he cannot really believe that. If they followed such reckless advice, who would pay for their campaigns?