Joss Whedon tries to be his best (and succeeds!) with a clever, action-packed season finale. 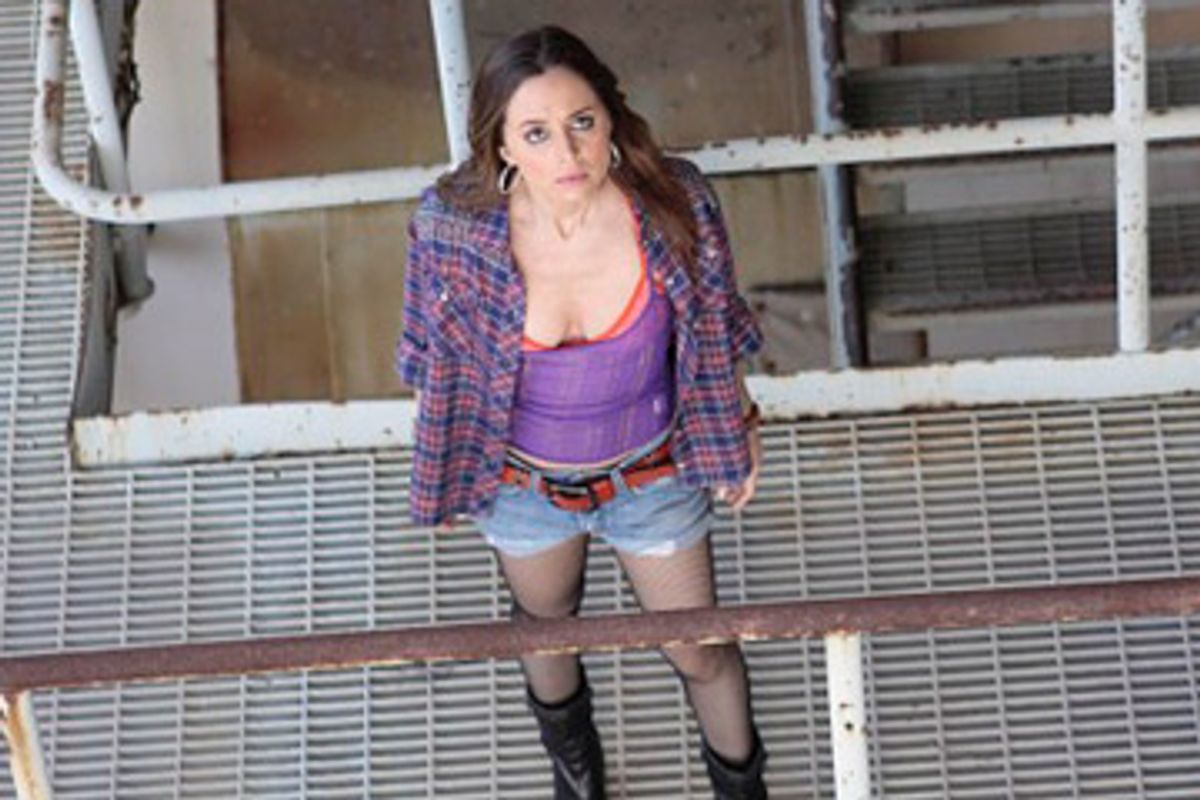 The Dollhouse is under siege! Alpha, a former doll (i.e., brainwashed human for hire), has broken into the underground facility, imprinted their most popular doll, Echo, with a new personality, and kidnapped her!

"He took her!" Topher, the head scientist in charge of brainwashing, runs over to tell his boss, DeWitt. "And he went into the system and severed the biolinks, I can't see her vitals, she's just ...  gone."

Topher (Fran Kranz) is a little shaken and cranky, but don't misunderstand, he's a trained professional, albeit something of an oddball who tinkers with computers and has a stoner-geek sense of humor. You know, he's that funny, all-around great guy --­ we all know one! -- who erases women's memories just so they'll be the most carefree, fun-loving high-class hookers available.

But when Topher starts to panic, his boss, Adelle DeWitt (Olivia Williams), stays focused on the bottom line. "I want to know what she's imprinted with!" she barks at him.

Sure, DeWitt is a little bit of a grump, but that's only because she's something of a control freak when it comes to the mind-pillaged mannequins living under her purview. Beneath that caustic exterior there's a really down-to-earth, intelligent, witty woman, a woman who gets lonely sometimes and, just like any other woman you might know, spends a romantic weekend having wild sex with one of the hot men whose brains she's erased. She recently had her favorite doll imprinted with the personality of her ideal mate: affectionate, supportive, dashing, British. James Bond meets McDreamy. But afterward, she felt a little wistful, just like any regular gal who steals people's souls for huge sums of money might.

Yes, "Dollhouse" (and "Buffy The Vampire Slayer") creator Joss Whedon loves blurring the line between good and evil (as Mary Beth Williams explains in her recent piece on the show). This time, though, the line is so blurry we can barely see it. That's why it's confusing when Paul (Tahmoh Penikett) tries to save Caroline aka Echo (Eliza Dushku) from the dollhouse, and unknowingly leads Alpha (Alan Tudyk), a former doll turned serial killer, into the facility with him: We want Paul to succeed, but we don't really want our cool, fun friends Topher and DeWitt --  and least of all Echo's sensitive handler Boyd Langdon (Harry Lennix) -- to get in any serious trouble, nor do we want the dollhouse to stop existing. What would be the fun in that? Because like most regular, ordinary people, we enjoy watching young women and men being mentally and emotionally manipulated and subsequently abused by people with enough money to purchase their own private, living, breathing fantasies.

But we especially enjoy it when our favorite human-plaything sexploitation series is written by Whedon, because then characters tend to say really witty things, then break out into kung fu moves and start swinging blunt weapons at each other's heads whenever tensions are running a little too high. That's what Alpha and Echo end up doing  -- you know, once Alpha takes Echo to his dank little hideout with the aim of imprinting her with every personality she's ever been imprinted with before. Just to keep things interesting, he's also imprinted a kidnapped shoe clerk with the personality of Caroline, the real human behind Echo, the one who signed a contract with the dollhouse to be a brainwashed operative/sex slave for five years in order to get out of a jam.

So Caroline (in the shoe clerk's body) warns Echo (who's most recently been imprinted with a personality called Whiskey): "Look where you are. You're in a lair, ok? An evil lair, and you're sitting in some messed-up dentist chair letting a guy who talks to himself attach wires to your head --­ which, incidentally, is my head."

See how quickly the blurry moral boundaries stop mattering, with plot lines and dialogue this good? And anyway, we've been watching ethically questionable televised entertainments ever since Tony Soprano and his boys began killing out of greed or boredom almost a decade ago.

The big flaw of "Dollhouse" isn't that its premise is morally repugnant. The big problem is Eliza Dushku. Unlike the actors who play Sierra (Dichen Lachman) and Victor (Enver Gjokaj), chameleons who shift completely depending on the personality their doll has been imprinted with, Dushku stays the same. Whether she's the hostage negotiator or the dream girl or the youth outreach volunteer, Dushku walks, talks and acts exactly the same. Sometimes she's smug and swaggery, sometimes she's full of wonder, sometimes she's coy and sassy. But she's the same person. Imagine Showtime's personality disorder comedy "United States of Tara" with a montone Heather Locklear in the starring role instead of Toni Collette.

OK, Dushku does manage a reasonable Southern accent as Whiskey, which is more than you can say for half of the actors on HBO's "True Blood." But that's still just the Southern version of coy and sassy Echo, which yields to smug and swaggery Echo when Alpha finally succeeds at imprinting her with her 38 former personalities. He's hoping to wake her up to the enormous possibilities --­ world domination, homicidal sprees, codependency --­ of a long-term partnership with him. Instead of thanking him and agreeing to rule the inferior single-personality mortals of the world by his side, Echo tries to bash his head in with what looks like an extra-large crowbar.

"Right, new superior people, with a little German thrown in," she snaps back. "What could possibly go wrong?"

Look, who really cares about whether or not Dushku is a truly great actress? (She can pull off a line like, "I have 38 brains. Not one of them thinks you can sign a contract to be a slave." ) "Dollhouse" started out the season as the usual repetitive Fox suspense thriller, obviously hewing closely to the network's expectations that the show cater to the shortest attention spans, and then blossomed about halfway through the season and became something endlessly fun and compelling overnight. That's right: A lead actress who's not great, an ethically questionable premise, and the show is fantastic. Let's just hope Fox is smart enough to renew it, because this has cult hit written all over it in big, black magic marker -- you know, the kind that your average formerly brainwashed homicidal maniacs use to scrawl their creepy messages in.

And you can bet there'll be even more creepiness and stalking and face-slashing from Alpha next season (we'll just go ahead and assume that Fox isn't stupid and there'll be a next season), because he escapes Echo and Langdon and Ballard without a scratch. How will Alpha have evolved by the time we see him next? ("He's like Soylent Green. He's people," Topher says of him.) When will he strike again?

Sadly, Echo also survives, which means that Dushku won't be replaced by that really far more interesting and skilled actress, the one who played the kidnapped shoe clerk.

No matter. Friday night's "Dollhouse" finale had it all: Plenty of twists, turns, and season-long mysteries revealed, along with a healthy dose of evil lairs, fisticuffs, clever banter, Nietzsche and Soylent Green references, and mind-ravaged, soulless human ghosts for hire thrown in for good measure. You know, just like most of the sci-fi serial dramas on TV these days.