The funny thing about mothers

The authors of "Love, Mom" talk about the unintentional comedy (and cringes) of maternal correspondence. 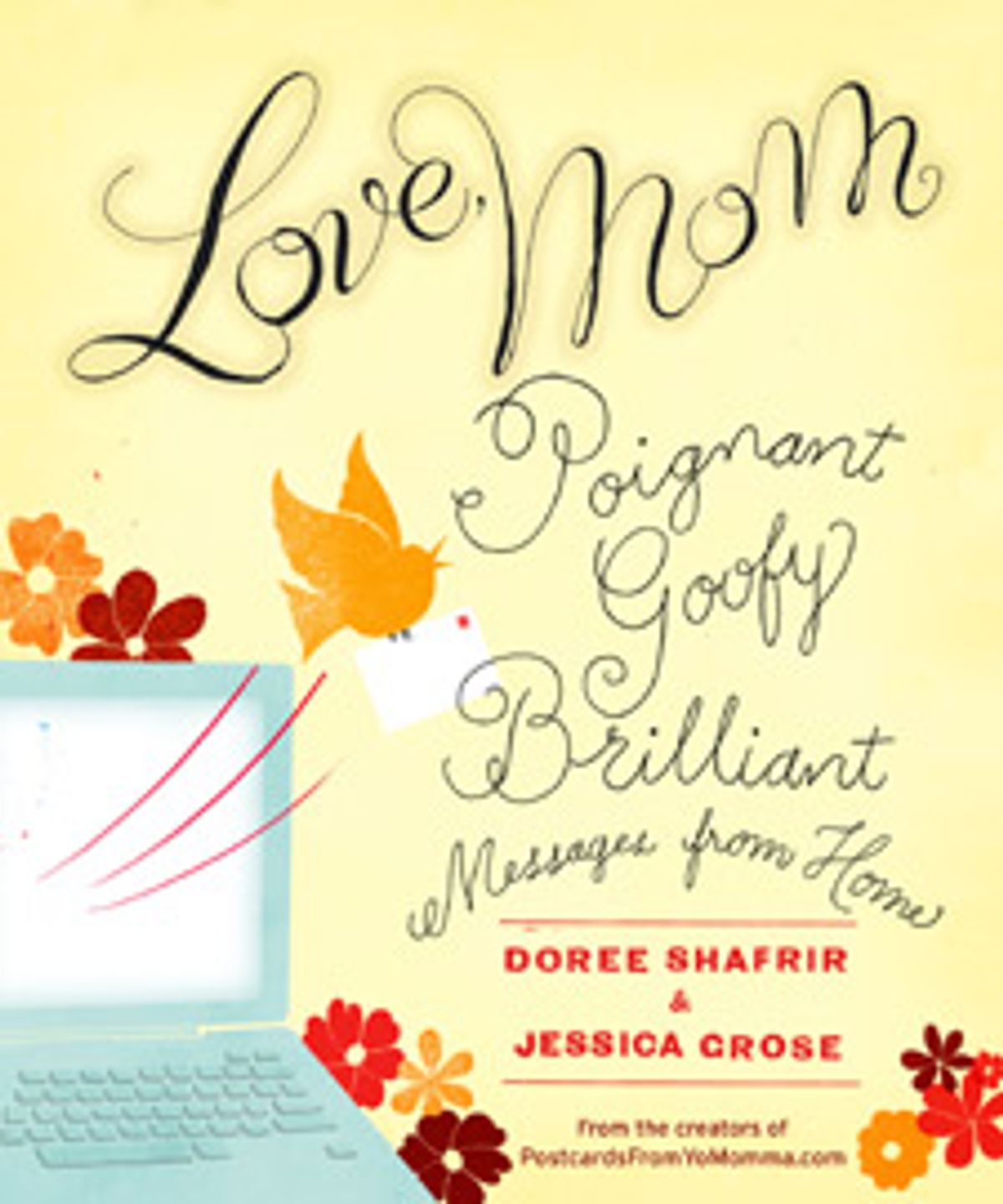 I have a friend whose mother litters every email with at least a dozen exclamation points. It's as though she's having a going-out-of-business sale, as though she could transmit her love through the sheer! force!!! of punctuation!!!!!! My own mother -- a therapist scrupulous in her use of language -- is still so flustered by using a computer that a jotted-off email sometimes appears as though a cat has scampered across the keyboard. I've had more carefully crafted notes from friends texting drunk with one eye open at 3am.

Funny things happen when moms meet Gmail, not just because they get tripped up by technology (plenty do not) but because moms -- in their earnestness, their frankness, their goofiness -- are simply funny. Anyone looking for further evidence need only flip through "Love, Mom," a collection of maternal missives to adult children that are as endearing and cringe-inducing and skewed as mothers themselves. Like this little gem: "My computer has software transmitted diseases (STDs) from all the software I had to download for a class… I hate computer STDs. ☹ "

Or this terse slapdown: "Michael, I think you do too many drugs and say too many disparaging things about women on your blog. Love, Mom. "

The book "Love, Mom" originated in a charming website called PostcardsFromYoMomma, started by Doree Shafrir and Jessica Grose after joking about their own maternal correspondence. What began as an experiment -- asking friends to send in their own forehead-slapping letters from home -- quickly ballooned. "There was no way we could've anticipated the absolute deluge of emails we started to get as soon as the site went up," Shafrir and Grose write in the introduction to "Love, Mom." Go figure: When it comes to mothers, people like to vent. But more than mere mockery, the letters are a tribute to the adorable and exasperating quirkiness that make moms, well, moms. As one classic exchange on the Postcards website puts it, "You were welcome to stay in my uterus for nine months, and then my house for 17 years. But I understand, a week at your apartment might be a bit … much."

The new book collects previously unpublished letters for yet more entertaining glimpses at the weird and wacky mother-child bond. Regardless which side of that hyphen you fall on this Sunday, it's a relationship we all know to be complicated, sometimes frustrating, deeply enriching and -- thank god -- fodder for comedy.

I recently emailed with Grose, the editor of Slate's XX Factor blog, and Shafrir, an editor at the New York Observer, about the book.

"Love, Mom" is poking fun at mothers, sure, but it's also a sweet testament to the ways parents labor to keep up, to be included, to meet us on our own turf. What are some of the universals about mothers that you see over and over in these exchanges?

Doree Shafrir: I think you're right that one of the overall themes of the book and the website is that moms really do want to stay involved in their kids' lives -- and kids want their moms involved as well, to a point, of course. We get a lot of messages now about moms joining Facebook (and, to a lesser extent, Twitter), and it seems like another example of moms wanting to be able to relate to their kids in a way they think their kids will understand. Moms are also not shy about telling their kids that they've been lacking in the communication department -- we have a whole category of emails called "Missing You"-- but they're also keenly aware of not overstepping their kids' (perhaps arbitrary?) boundaries, like this mom: "Any news you care to share on what’s happening in your life? Any thought of getting out here for holidays? How are your eyes? I have now used up my self-imposed three question limit. Here’s hoping for some answers. Love you. Mom."

I talked to a friend about PostcardsFromYoMomma, and she said, "That's where I go whenever I'm feeling crazy about my mom." Do you find that for some people it's a kind of therapy to read this stuff?

Jessica Grose: It's definitely therapy for a lot of people. Either they read the insanity of other moms and feel less alone, like they're not the only person on the planet with a bonkers mommy, or they read the emails and think: Wow, my mom is relatively normal compared to these loons. It made me realize how much my mother respects my personal space. Compared to most moms' missives we read, she is so not up in my business.

What is your favorite email from the book?

Shafrir: My favorite is one of the shortest. The subject is just "hi," and the entirety of the email is: "I want grandchildren." Some of the emails in the book are passive aggressive, but this one is what you might call aggressive-aggressive.

Grose: Mine is the mom who CC-ed her kids on the letter she sent to Craig Newmark of Craigslist. She saw Craig on "The View" and he was wheezing a little.

Your list is incredible! My 3 kids have used it a lot and I just looked at it. I saw you on The View and think you are quite a guy! The reason I'm writing you is that you appeared short of breath. I'm a Jewish mother and felt compelled to tell you and suggest you see a physician. I've seen too many sick people lately and don't want you to be one of them.

You have too much going on. (Pulmonary doc? Internist maybe first.)

You don't have to respond. Just see a doc. I'll feel better.

(PS: He wrote her back a really sweet letter in response. That Craig is such a nice boy!)