It's time for Obama to listen to his mama

The president has promised to increase religion's influence on policymaking. He should honor the late Ann Dunham by strengthening the wall between church and state instead. 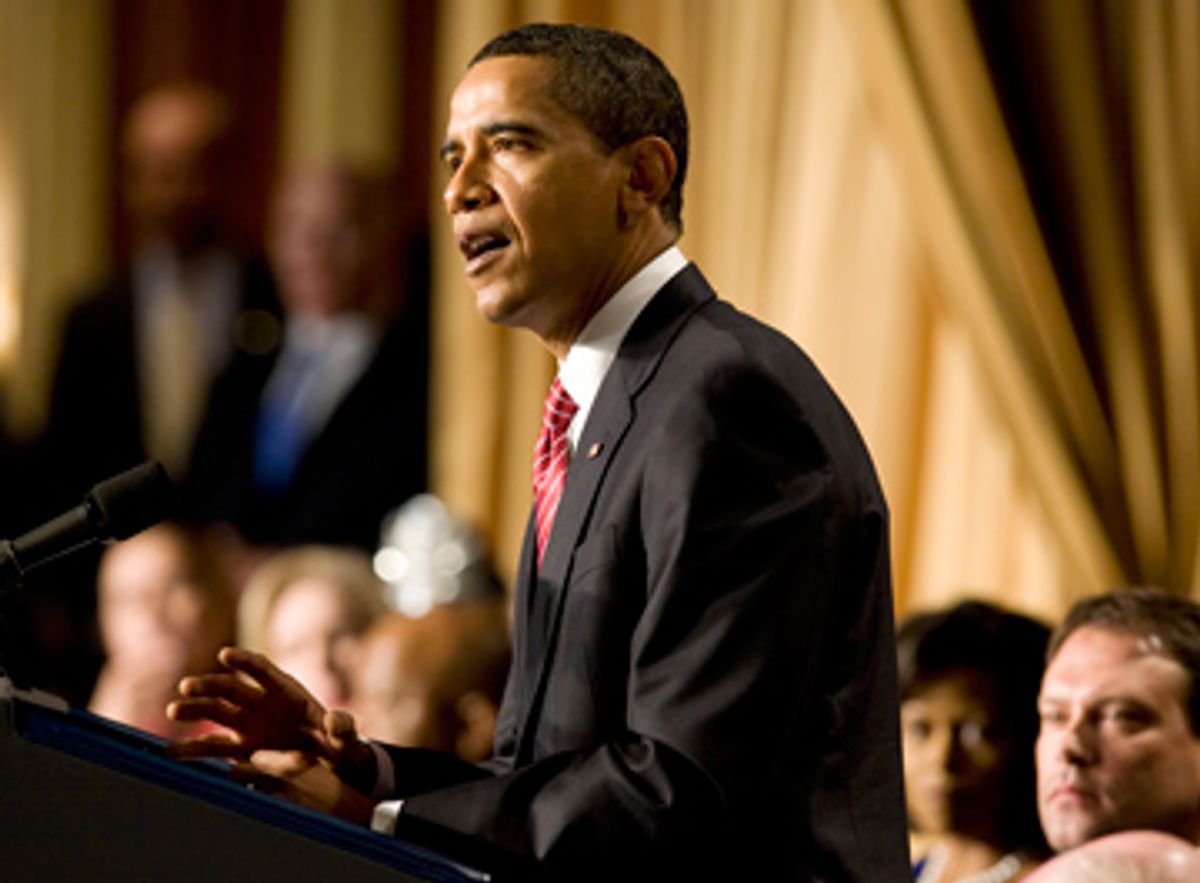 I have a wish for Mother's Day: I'd like our president to listen to his mother and adopt a modicum of skepticism regarding the role of religion in government. Barack Obama's own religious background, as he noted at the annual National Prayer Breakfast in early February, includes a father who was a Muslim and became an atheist, "grandparents who were non-practicing Methodists and Baptists, and a mother who was skeptical of religion." But I've watched with some alarm as the president engages in a full-court press to prove that Democrats can use religion just as inappropriately as Republicans. He seems hellbent on establishing in the West Wing of the White House a religious intrusion into public policy that would make Karl Rove proud.

Yes, it was a Democrat, Bill Clinton, who started it all. In his welfare reform bill, Clinton included an expanded opportunity for religious groups to win federal funds for social services without meeting standards for not discriminating in employment and not proselytizing the people they served. A Republican, the second President Bush, opened the gate wider. He established the Office of Faith-Based Initiatives. It was controversial, and it was, transparently, an effort to steer money toward the GOP's religious base, but it had only one task, which it pursued aggressively. It guided religious groups through the federal funding process and ensured that they got a share of federal and state monies.

Obama has confirmed that the funding role of the faith-based office will continue; during the presidential campaign, he promised to increase funding. He has also renamed the office and greatly expanded its role. What is now called the Office of Faith-Based and Neighborhood Partnerships will be led by a 27-year-old Pentecostal pastor, Josh DuBois, and it have a wide policy advisory role. Not only will it continue to guide religious groups through the grant-making process, but it has also assembled a 25-member Presidential Advisory Council to serve as a policy advisor to the president on some of the very issues where religion has been more of a problem than a solution: gender, sex and reproduction. The council is already busily working on the first four issues the president laid before it: supporting women and children, addressing teen pregnancy, reducing the need for abortion, and promoting peace in international relations. A new mandate has been added, and the council can now meddle in environmental policy as well. The executive order establishing the council permits it to "request and collect information, hold hearings, establish subcommittees and establish task forces" that include both its own members and others.

How did this happen? Well, think back to the Democratic defeats of 2004. Pundits and pollsters proposed that John Kerry lost, and the GOP gained in the House and Senate, because Democrats were seen as hostile to religion and "moral values." Big money supporters were up in arms and started meeting to plan the future of the party. It was decided that Democrats had to reach out to religion. The Democrats had to counter the Republican Party's religious right with their own army of God -- and that meant getting religion into electoral politics.

Mainstream religion, which was mostly allied with the Democratic Party on issues, demurred. The mainline Protestants -- Episcopalians, Presbyterians, Methodists, et al. -- had a role in promoting moral values through lobbying for social justice, but they had no stomach for becoming campaign workers in Ohio, Colorado, Pennsylvania and other battleground states. That slack was taken up by outliers in the world of religion: evangelicals who had broken ranks with the far right on poverty, the environment and war, but not on women, sex and reproduction. Led by Jim Wallis, this crowd started advising candidates on how to talk a language that would convince Christians that the Democrats believed in God.

Sure enough, we started to hear Democrats note that there were 3,000 verses in the Bible about poverty or that the budget was a moral document or that the number of abortions that occurred in the U.S. was a national tragedy that needed to be reduced. A small slice of the Catholic community joined in -- again, the "peace and justice but no contraception or abortion" crowd, a group that had no clout with anyone. They didn't mirror the views of most Catholics, who are pro-choice and strongly pro-family planning, and they were not favored by the bishops, who were happy to sacrifice peace and justice for Republican anti-choice rhetoric.

Politics makes strange bedfellows, and the Democratic Party and these evangelicals and Catholics teamed up to elect Democrats. The faith-based folks went to Ohio, Colorado, Pennsylvania and Kansas in 2006 and 2008 and knocked on doors. They put their antiabortion credibility on the line, noting that it was pretty impossible to make abortion illegal and that therefore Obama was a better choice to make it rare. Obama started to talk about reducing the need for abortion by making adoption more palatable and supporting women who are pregnant and want to continue the pregnancy. He promised to work for common ground on abortion.

The fact is that like it or not, common ground on abortion has already been achieved. Abortion will be legal, but it will be restricted. Both sides of the debate are pretty well shut out of political discourse. Heard NARAL or Planned Parenthood quoted in the media recently? The National Right to Life Committee of Operation Rescue?

Designing a faith-based office that focuses on these kinds of issues, which rightly belong in the Department of Health and Human Services and in the White House Office on Women and Girls, makes no sense. It is wrong to cede issues related to sexuality, gender and reproduction to religious leaders who have been afraid to utter the word "sex" from their pulpits and who continue to discriminate against women within their denominations. It is frankly bizarre to turn to religions that have been fighting each other for centuries over which is the true faith and ask these ancient foes to mediate large-scale issues of ethical conflict.

Bill Clinton misread the American public on religion. So did George W. Bush, who never convinced anyone that he was a man of faith, but did eventually manage to convince everyone except evangelical Christians that they should leave the GOP. Obama is making the same kind of miscalculation. Find a church to worship in on Sundays, Mr. President, but get sectarian religious values out of the White House.