A partial transcript of the upcoming episode in which Maury reveals to John and Elizabeth Edwards whether or not John fathered Rielle Hunter's baby. The results are in! 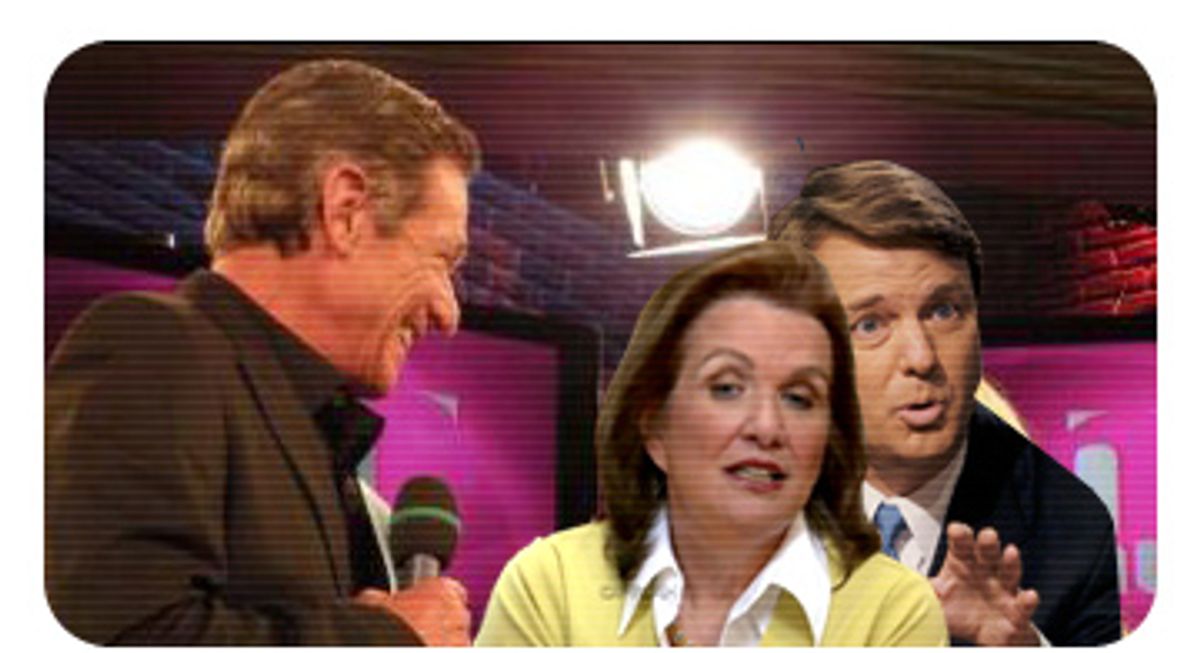 John and Elizabeth Edwards are sitting awkwardly onstage, far apart from each other -- uncomfortably aware of the other empty chairs onstage. Maury Povich is standing at the front of the audience, with one leg up on the stage, his tacky pleated pants bunching up.

Maury Povich: And welcome back! We've heard about poor Elizabeth Edwards and how her husband, John, the man who she thought would be the president, her president, had to confess his affair to her -- two times! The first time, he claimed it was just a one-night stand.

Maury: But there was more. Much, much more! And the hideous, excruciating, embarrassingly public pain for Elizabeth doesn't stop there. Does it, Elizabeth!

John Edwards: Hold up there, homeslice --

Maury: Elizabeth, you've said that you actually don't think that Rie -- sorry, that woman -- is your husband's baby mama.

Elizabeth: I certainly do not think that woman's child looks anything like my children.

Maury: But if John is not the baby daddy, why is there a picture of him holding the baby?

[ONSTAGE] Maury: Well, we have a surprise for you, Elizabeth. Backstage, listening to everything we're saying, is Rielle Hunter. Who says. She is! The mother! Of your husband's baby!

Elizabeth: Where am I? Is this Thunderdome?

[BACKSTAGE CAMERA] Rielle Hunter is smoking a cigarette while her sister, Roxanne Druck, is bouncing 1-year-old Frances Quinn Hunter on her knee.

Roxanne: Shut it, you old skank! Look at this critter! She's got John's eyes and jaw line and lips. She even wears her diapers just like he does!

Maury: Let's bring on the harlot herself!

Rielle and Roxanne strut onstage. Rielle is wearing high-heeled horsehair boots and a blond wig from the Kim Zolciak collection.

Rielle: Screw all y'all trash out there!

Roxanne tosses the baby to Maury and rushes the crowd; security holds her back.

Maury: OK now! OK, everyone. Whoa, there. So, John. Look upon this beautiful child. Do you think this lovely little white baby is yours?

John: Well, it could have been nearly anyone's, right? You feel me, Maury?

Maury: I know you didn't want a DNA test, John.

John: Whatever. I'm not a scientist.

Maury: Earlier I personally supervised the extraction of DNA from little Frances. [Holds up needle] What a brave toddler! And thanks to the tabloid press, I knew exactly where to get some of yours.

Maury: I refer, of course, to Joseph Torrenueva, the infamous $400-a-haircut manscaper of Beverly Hills, Calif.

Joseph Torrenueva: Jesus Christ, are we still talking about his damn haircuts?

[ONSTAGE] Maury: Is everyone ready? I have the big news to deliver to you. Well, except for Rielle. Because -- audience?

Maury: That's right, ladies and gentlemen. Now I will unseal this envelope. And we'll find out who is the baby daddy. Is it John Edwards? Her former lover, the novelist Jay McInerney?

Audience: Huh? Who? Never heard of him!

Maury: Or maybe any one of the tens of millions of American men not currently in prison who might have walked by Rielle on a sunny afternoon while she was in estrus? We'll find out -- right after this message! But first -- John?

Maury: Is this affair completely over?

Maury: Is your political career over?

John: You know, Maury, I'm not sure I had a political future anyway.

John: Yeah, I don't know whether politics is really where I want to be expressing my creativity now.

As we cut away to a Ditech commercial, we see Elizabeth pick up one folding chair and Rielle pick up another. They both head for John.

Choire Sicha is the co-proprietor of TheAwl.com, and at work on a nonfiction book for HarperStudio.