The hidden hand of Dick Cheney

Out of office, he continues to push his tortured version of reality -- and his vision of an imperial presidency -- and there are signs he is succeeding. 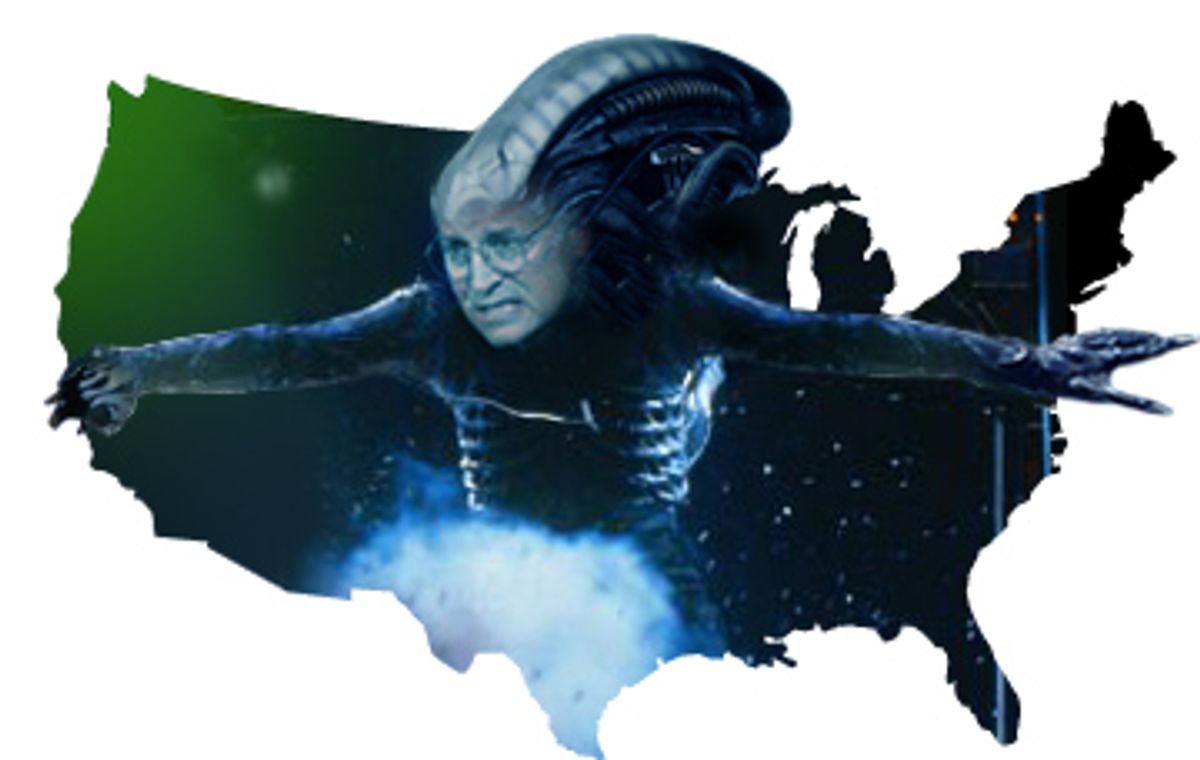 Dick Cheney is out there. He is defending torture, dissing Colin Powell, and genuflecting before radio personality Rush Limbaugh as the high priest of what's left of conservatism. His refusal to go quietly, unlike his much-reviled boss, is risky. He was a laugh line more than once at Saturday's White House Correspondents' Dinner.

But the media's focus on the sheer spectacle of the ex-veep's antics, and on the Republican vs. Democrat feud he's stoking, underestimates the way Cheney's principles still inform many of the country's most crucial policies. Like the creatures in the "Alien" films, Cheney has planted some vicious spores in the bellies of his successors, which threaten to tear them apart as they mature. Can the new administration truly reverse Cheney's transformation of the United States into a 21st century empire, with the president an imperial figure above the law?

The former vice-president is now a more reliable laugh-getter than vote-getter. At the correspondents' dinner, President Obama quipped, "Dick Cheney was supposed to be here, but he's very busy working on his memoirs, tentatively titled 'How to Shoot Friends and Interrogate People.'" Guest comedian Wanda Sykes went further, saying she found Cheney positively terrifying. "He scares me to death. I tell my kids, I say, 'Look, if two cars pull up and one has a stranger and the other car has Dick Cheney, you get in the car with the stranger.'"

This week's news is about the grand old pit bull's struggle to continue to define his own party. Cheney emerged last Friday to warn on a North Dakota radio program that it would be a mistake for the Republican Party to moderate its message. (Does that mean it is now radical?) Then on Sunday Cheney told Bob Schieffer of "Face the Nation" that it was a mistake to stop using waterboarding and other forms of extreme interrogation, and that they did not constitute torture. He also poked fun at Colin Powell, questioning his credentials as a Republican and expressing a preference for the waspish Limbaugh as the party's leader.

But don't dismiss Dick Cheney as a fading punch line, or as tragedy reprised as comedy. While the Obama administration has adopted large numbers of policies that directly contradict Cheney's positions, it would be a mistake to overlook Cheney's continued influence on the executive branch through the precedents set by the Bush administration. Among the former vice-president's most important legacies is increased government secrecy. Obama's Department of Justice continues to rely on an alleged "state secrets" privilege. It has thus tried to block lawsuits by victims who alleged they were kidnapped and tortured by U.S. intelligence even though they were innocent of wrongdoing, on the grounds that such trials would reveal state secrets. The same state secrets doctrine was used by Obama's DOJ in an attempt to block investigations of Bush-Cheney warrantless wiretaps. Likewise, the DOJ has attempted to block lawsuits seeking the release of Bush-era e-mails and to prevent prisoners held at Bagram air base in Afghanistan from appearing before a judge to challenge their imprisonment.

Although the Obama administration is pledged to withdraw from Iraq militarily in a way that Cheney would never have contemplated, it is just as committed as Bush-Cheney to spreading good cheer about the new government in Baghdad. Secretary of State Hillary Clinton called the bombings by Iraqi guerrillas this spring the "last gasp" of "rejectionists," seeming to channel Cheney's allegation in 2005 that we were seeing the "last throes" of the insurgency. Red Washington and blue Washington both want to tell us stories about how Iraq will be OK and is just bedeviled by a few unreasoning malcontents who are on their last legs.

On a trip to Afghanistan in 2004, Cheney told U.S. troops, "Your children and my grandchildren will live in freedom tomorrow because of what you're doing today." He warned them of continuing threats there, however, saying, "Our coalition still has important work to do." He added, "Freedom still has enemies here in Afghanistan. And you are here to make those enemies miserable." Obama has, likewise, tied the establishment of a stable government in Afghanistan to U.S. national security, and pledged to defeat the Taliban and al-Qaida (even though there does not appear to be any significant al-Qaida in Afghanistan anymore). Both Cheney and Obama tend to amalgamate al-Qaida (a small, mainly Arab, international terrorist organization) to the Taliban (a form of Pushtun fundamentalist nationalism with local concerns). Cheney's war in Afghanistan envisaged no end, and neither, apparently, does Obama's.

Many of Cheney's harshest policies were rooted in a conviction that small terrorist groups might well get hold of nuclear weapons or other very dangerous armaments, and that all necessary steps must be taken to forestall that eventuality, even if it has only slight probability of occurring. (Journalist Ron Suskind called this notion the "one percent" doctrine.) The Obama administration just forced the Pakistani military to invade the Malakand region and to displace hundreds of thousands of civilians in the course of shelling and bombing a few thousand Taliban tribesmen. Among its rationales for this massive application of force was that the Taliban had advanced too close to Islamabad, and, apparently too close to that country's nuclear warheads. (In fact, the idea that a small force of rural Taliban could take over the Pakistani government or get access to its closely guarded arsenal is fantastic.)

In the government's commitment to a doctrine of "state secrets" that protect the executive from the scrutiny of other branches of government, in the continued attempt to block lawsuits and release of important documents, and in the shielding of secret programs of torture, unlawful kidnapping and warrantless wiretapping, Obama is preserving policies to which Cheney is deeply committed. In configuring Pushtun fundamentalists in southern Afghanistan and northern Pakistan as a mortal threat to the U.S. and potentially even a nuclear power, the Obama administration is picking up themes from Cheney's old speeches and running with them. Cheney may or may not win his struggle for the soul of the Republican Party. If we are not careful, he will win the struggle for the soul of the country as a whole.