Who's afraid of Wanda Sykes?

The comedian known for going over the top is the perfect match for Rush Limbaugh. So why are some liberals upset? Plus: Hitchens on Sykes: "The black dyke got it wrong." 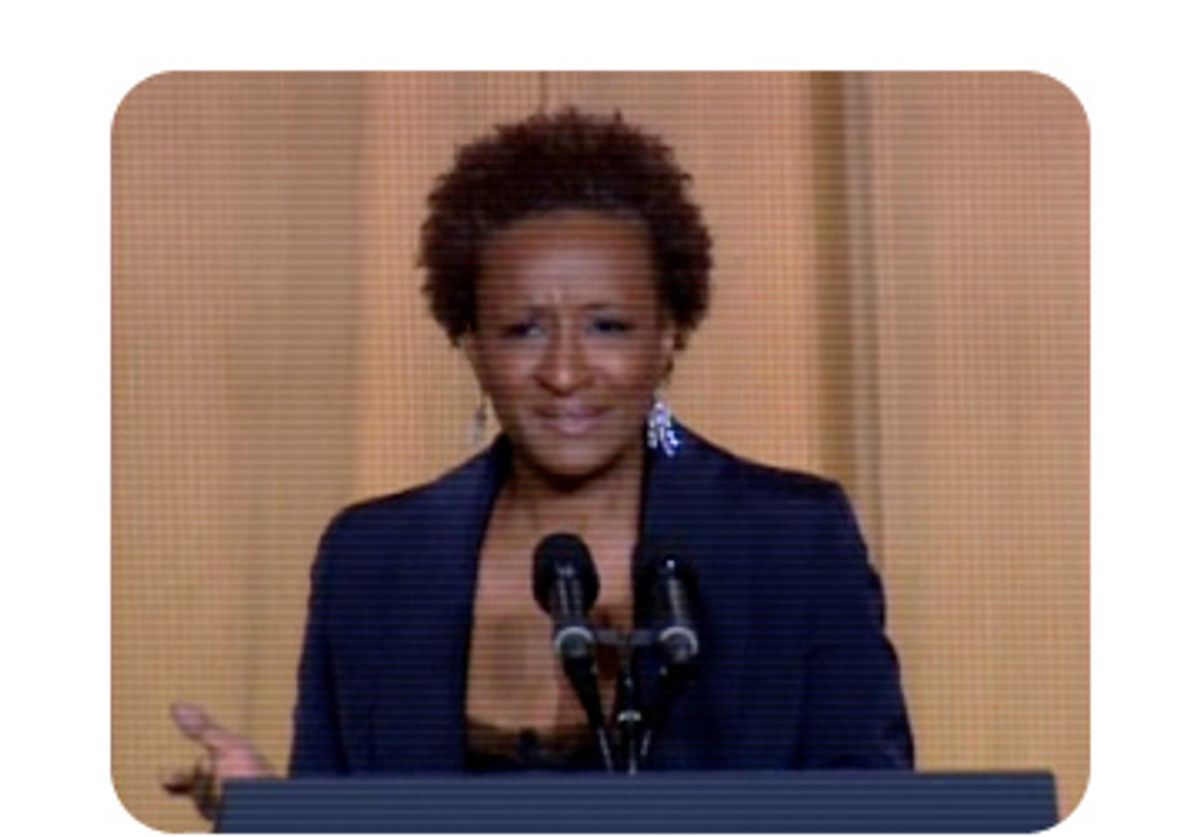 I love Wanda Sykes, I always have. I laughed out loud watching her White House Correspondents’ Dinner routine (on the Web; Salon has never attended that particular circle jerk of D.C. insularity; maybe someday we will!)

Sure it was off-color and, um, slightly out there -- but that’s the point. Or it used to be. Even if I didn’t already love Sykes, my point of view would be: Once a barely elected president who started a devastating war on false pretenses can joke about those pretenses at that same dinner (Remember Bush looking behind sofas for WMD? ) it’s hard to ever be offensive again.

There are other wince-worthy examples we never hear about: At the 1970 Gridiron dinner, according to "Nixon's Piano," by Kenneth O'Reilly, the not yet disgraced GOP President Richard Nixon and his scandal-dogged V.P. Spiro Agnew did a classy racist interpretive piece. "What about this 'Southern strategy' we hear so often?" Nixon asked Agnew. "Yes suh, Mr. President," Agnew replied in what was known as “dialect,” adding, "Ah agree with you completely on yoah Southern strategy." While Nixon played a variety of songs on piano, Agnew drowned him out with his renditions of “Dixie.”

Also in that Gridiron program, a newspaper reporter sang a rendition of “Dixie Melody” with these words: “Rock-a-bye the voters with a Southern strategy; Don't you fuss; we won't bus children in ol' Dixie! We'll put George Wallace in decline Below the Mason-Dixon line. We'll help save the nation From things like civil rights and inte-gra-tion! Weep no more, John Stennis! We'll pack the court for sure. We will fight for voting rights -- To keep them white and pure! A zillion Southern votes we will deliver; Move Washington down on the Swanee River! Rock-a-bye with Ol' Massa Nixon and his Dixie strategy!” Hilarious, right? Move over, Wanda Sykes! Let's make room for that kind of comedy!

Reader J.K. sent me that historical footnote; surprisingly it never came up in critical coverage of either Stephen Colbert in 2006 or Sykes in 2009. The prissy MSM mandarins barely mussed their hair in response to the sacrilegious Bush jokes, let alone Nixon race jokes -- but Sykes is being accused of slander with her jabs at Rush Limbaugh -- and Obama is being attacked for barely stifling laughter at it. It’s so ridiculous. In case you’ve been in a bunker without media, Sykes is in trouble mainly for saying this:

“Rush Limbaugh said he hopes this administration fails. So you're saying, 'I hope America fails,' you're, like, 'I don't care about people losing their homes, their jobs, our soldiers in Iraq.' He just wants the country to fail. To me, that's treason. He's not saying anything differently than what Osama bin Laden is saying. You might want to look into this, sir, because I think maybe Rush Limbaugh was the 20th hijacker but he was just so strung out on Oxycontin he missed his flight." Obama supposedly laughed, but then took a sip of wine. "Too much?" Sykes asked him. "Rush Limbaugh, 'I hope the country fails' -- I hope his kidneys fail."

OK, I personally wouldn’t make a joke about someone’s kidneys failing on cable news -- I am a serious unpaid news pundit, and I want to be asked back! But I also wouldn’t mock Michael J. Fox and his Parkinson’s tremors, as Rush Limbaugh did, or wax hysterical about having to grab my ankles for our new black president, as, yes, Limbaugh did. (I’ve never once thought about that possibility, to be honest. I really admire Michelle and their marriage.)

Watching Sykes, I was so pleased. I thought: My God, there’s never been a better match for Limbaugh. He’s an entertainer and a comedian -- I despise him, but every once in a while he’s funny -- and he’s regularly off-color; Sykes is all those things while, in my opinion, funnier and less cruel. But let’s be honest: We had comedian and entertainer vs. comedian and entertainer. She’s his match and his equal, and anyone who criticizes Sykes without sending the same criticism to Limbaugh is both a phony and a wuss.

Press secretary Robert Gibbs reportedly tried to back away from Sykes, and amazingly -- according to Newsbusters.org, not the most fair and balanced Web site -- so did Keith Olbermann. (I've e-mailed MSNBC for comment because I can't quite believe that.) But there’s been no rebuke from Obama, and that makes me happy. Much of Sykes' routine was actually tweaking Obama: My favorite jokes included Sykes' lampooning the president for his shirtless photos (“I know you’re into transparency but ... I don’t need to see your nipples"), his race (“The first black president, I’m proud to say that, unless you screw up, and then it’s gonna be, what’s up with the half-white guy? Who voted for the mulatto? What the hell?”).

And much of Obama’s routine shockingly crossed our dull political lines as well. He described Dick Cheney’s new book, “How to Shoot Friends and Interrogate People,” and welcomed John Boehner as a fellow "person of color," although “not a color found in nature.” Obama actually cut a wider swath of comedic pain across the political landscape than Sykes did -- but Sykes came down hard on He Who Cannot Be Criticized, Oxycontin Man! And she's now in deep trouble.

I’m late to the faux outrage about Sykes’ edgy hilarious routine, but let’s let Jon Stewart get the last word. Like many of us on Monday he wondered how Sykes could provoke outrage while torture revelations provoke yawns and/or lame rationalizations.

Let this be the beginning of a beautiful new era of savaging Limbaugh freely and with delight -- and please God, let the rumors of Olbermann’s disapproval be false!

UPDATE: In fact, my hopes that Olbermann had been misheard were dashed -- he repeated his criticism on "Countdown" last night. “A seasoned pro went well beyond the line,” he intoned, according to Taylor Marsh. So I guess K.O. is now the arbiter of what's going too far when it comes to criticizing the right wing. I didn't get that memo. Plus: Is anyone more repellent than Christopher Hitchens? Well, Limbaugh is, but it's getting close. Here's what he's quoted telling New York magazine about Sykes' performance: "The black dyke got it wrong. Nobody told her the rules," he said. (Oh, did I forget to mention Sykes is a lesbian? Trust Hitchens to remember!) The rules, according to Hitchens? "The president should be squirming in his seat. Not smiling."

Does Hitchens remember when Colbert was criticized precisely for making the president squirm, because that was against the rules -- to be so rude to his majesty when he's only one seat away? K.O. and Hitchens have stayed too long at the fair; they've lost their edge. The black dyke got it exactly right, Christopher -- it will take many more White House Correspondents' Dinners before comedians have exhausted their right to roast the Bush administration.