It's not just his crazy "Out of the Bunker!" tour. As long as Obama covers up and refuses to prosecute torture, the Dark Lord prevails. 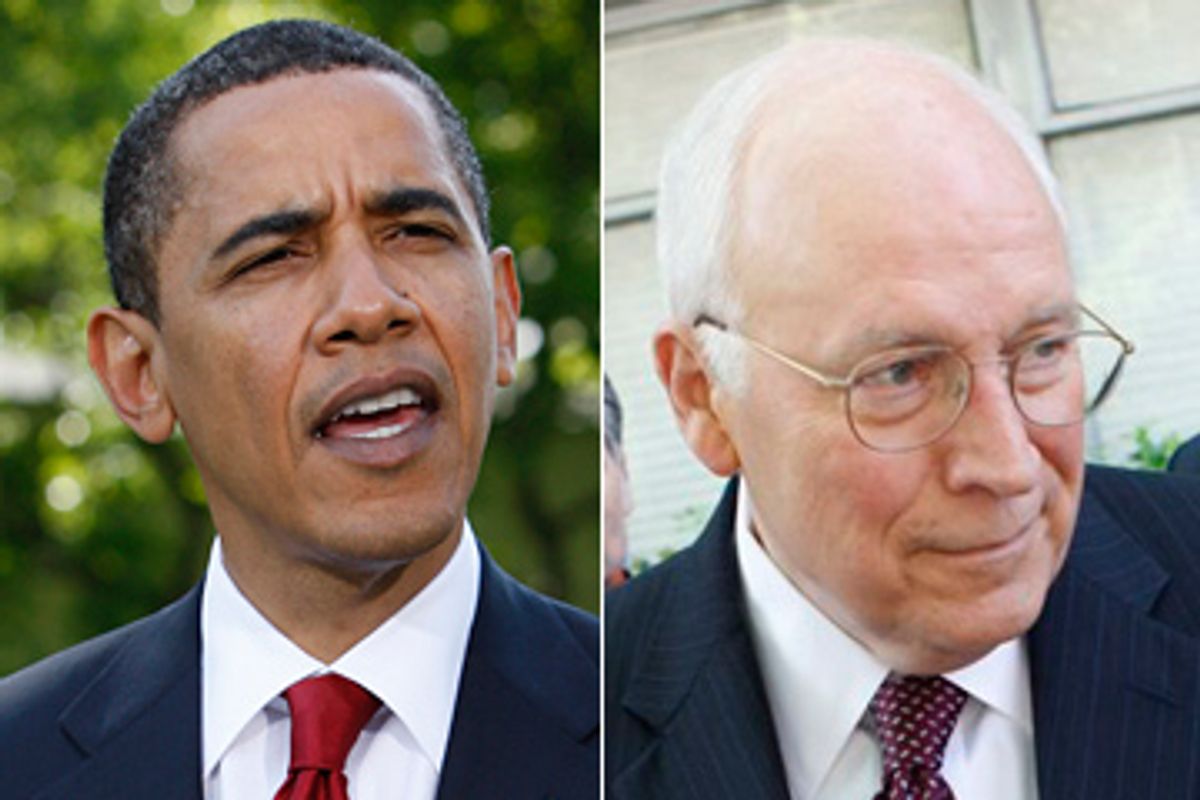 I really would like to laugh at Dick Cheney's "Out of the Bunker!" tour. This isn't the Cheney Americans have come to know and hate. Remember when he wouldn't talk to us? Now he won't shut up. He used to be the evil puppet master, the man behind the curtain, but without his puppet, he's got to speak for himself.

So there he is, almost daily now, defending torture and the war in Iraq, trying to start another war in Iran. He's decided that Rush Limbaugh is a better public face for the Republican Party than Colin Powell. It's like nobody told him we had an election, and his guy lost. He's in full campaign mode. He's becoming a punch line, but I'm having a hard time laughing (well, except at Obama and Wanda Sykes Saturday night).

It's easy to say this is good news for Democrats. It certainly seems as if Cheney won't be happy until there are two people left in the Republican Party, him and Rush Limbaugh. Gen. Powell? Don't let the door hit you in the ass on the way out. But I also think what Cheney's doing has disturbing political consequences, for the Obama administration and for the country. I'm also starting to worry Obama is internalizing Cheney's values, with a string of bad decisions on torture, culminating in today's move to reverse his prior commitment to transparency and block the release of more torture photos.

Clearly Cheney is legitimizing the worst sort of attacks on Obama, and he's been doing it from Day One, by insisting Obama is making the country less safe. That's despicable. (To be clear, he has every right to say anything he wants, and I have every right to call it despicable.) His decision to declare open season on Obama strengthens the hand of conservative crazies who think they can get away with obstruction and sabotage.

So I think he's hurting both parties, because he's trying to make cooperation and compromise impossible. Thanks to Cheney, we are embroiled in two wars, one of them unnecessary, both of them possibly unwinnable. Imagine if Republicans thought it was important to try to extend a hand to a new president who is leading the country through one of its worst crises in history. I'm not normally one to invoke "tradition," but the tradition of administrations not criticizing their successors for a decent interval actually supports democracy and the orderly transfer of power. When the American people vote for a new direction, both parties have collaborated admirably to give it to them (Ari Fletcher's lies about Clinton staffers' "vandalism" not withstanding). Cheney's refusal to go away is un-democratic.

Most Democrats, though, seem to think Cheney's attacks are good for Obama. Certainly the former vice-president seems to be unraveling before our eyes. Last night in New York, the new "Chatty Cheney" sounded a little bit deranged. There's a global "conspiracy" to let Iran get nukes? Generally, only the politically impotent wring their hands about "conspiracies." And yet I can't entirely dismiss the effect he's having, especially as I watch President Obama endorse and/or cover up so many of the worst aspects of the Bush-Cheney administration, especially when it comes to torture.

Juan Cole laid out a lot of what concerns me here -- and that was before the president's appalling decision to reverse course and block the release of more torture photos to the ACLU. Obama sounded positively Rumsfeldian in his insistence that releasing the photos could hurt the troops -- that's exactly what Rumsfeld's Pentagon said when Salon ran the last archive of shocking Abu Ghraib photos in 2006, and to my knowledge, there was no backlash against American soldiers. (Trust me, if there had been one, I'd have known; MSNBC's Tucker Carlson preemptively told me I had blood on my hands.)

For the first time in his presidency, I had the sick feeling that Obama was lying in his remarks on the photos, once when he said the new images "are not particularly sensational, especially when compared to the painful images that we remember from Abu Ghraib" -- I simply don't believe that -- and again when he insisted "the individuals who were involved have been identified, and appropriate actions have been taken." That is a flat-out lie. Out of eight prosecutions, mostly of so-called bad apples, only reservist Charles Graner sits in prison today, while the architects who "Gitmo-ized" Abu Ghraib and encouraged torture all went free.

I might have been mollified if, along with his decision on the photos, Obama had announced that Attorney General Eric Holder would appoint a special prosecutor to get to the bottom of who authorized and carried out torture, and to prosecute them as the law requires. But I think Obama's cave-in on the photos makes that less likely rather than more. Glenn Greenwald has the best rundown of all the ways Obama has disappointed civil liberties advocates in his first 114 days; read it and, yes, weep.

I could laugh at Cheney if I thought his worldview had been defeated; too much of it lives on, as Obama breaks another campaign promise and sides with the architects of the surveillance state. He's flip-flopped on FISA and the photos and other issues in between, and they've all had one thing in common: His decisions ultimately protect those who broke the law to spy and torture. Obama can still do the right thing on torture prosecutions, but I'm losing faith that he will.