One of the series' deepest mysteries is revealed and intriguing new loopholes open up in the thrilling season finale. 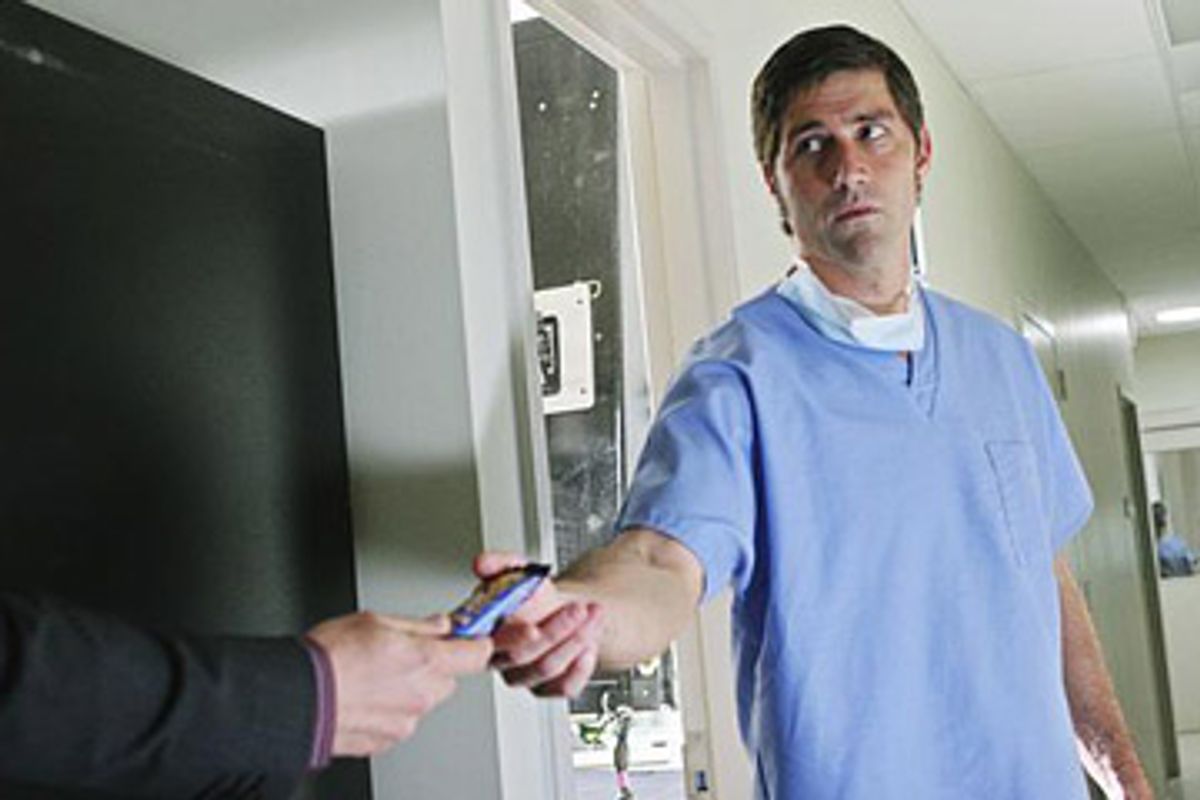 "Thirty-five years I lived on this island, and all I ever heard was your name," says Benjamin Linus to the man (if he is a man) that the characters in "Lost" call Jacob. "I never questioned anything. I did as I was told. But when I dared to ask to see you myself, I was told, 'You have to wait, you have to be patient.'"

The shadowy, Godot-like figure of Jacob has been one of the series' deepest enigmas, little more than a muttered name and a profile glimpsed in a dark shack that seems to flicker in and out of existence in the jungle. The two-hour finale of the fifth season of "Lost" revealed that Jacob has dipped his hand into the lives of all of the major lostaways: helping Kate elude the consequences of her first foray into a life of crime, handing Sawyer the pen he used to write that vengeful letter to the man who destroyed his family, persuading Hurley to board Ajira Flight 316. Jacob even appears to have brought John Locke back to life, after Locke was pushed by his monstrous father through an eighth-story window. If he's not a god, then Jacob is the next best thing to it in the universe of "Lost," and last night's finale demonstrated not only that he works in mysterious ways, but also that he has an implacable enemy.

Jacob seems kindly enough, but really: How positive are his little interventions? Did he save Sayid from being hit by a car or did he cause Sayid's wife, Nadia, to be struck down? Didn't giving Kate that lunchbox encourage her to think she was born to get away with shit, contributing to making her the borderline personality we've all come to know and dislike? Ben may have been better off not running into Jacob earlier, because like all the wretched daddies who populate "Lost," this father is simultaneously meddling and neglectful, delivering lectures about "choice" while moving his children like game pieces around a board whose larger pattern they can never quite see.

This, of course, also makes Jacob a nice surrogate for the show's creators, whose energy and ingenuity got a boost when they negotiated a 2010 end-date for "Lost." In its penultimate season, the series came out of the gate sleek and revitalized, charging forward at full speed and delivering a steady stream of action, revelations, explanations, cliff-hangers and (for the fans) sly, subtle call-backs to details dispensed in Seasons 1 and 2. Last night we learned that the reassuring story about an operating-room crisis of confidence that Jack told Kate way back in the pilot had not gone down exactly the way the good doctor told it. The little toy plane Kate seemed inexplicably attached to years ago turned up in the hands of a childhood playmate on the day she got the idea she didn't always have to answer for her actions. We now know how Pierre Chang got the artificial hand he wore in the first Dharma orientation film from Season 2.

You know all those tiresome people who used to boast of being wised-up to "Lost," ridiculing anyone gullible enough to think the series' writers had a plan and weren't just making it all up as they went along? I don't suppose those folks are still around and ready to admit how wrong they were? Season 5 has knit up loose ends, explained countless baffling moments, and moved steadily toward what seems increasingly likely to be a satisfying conclusion. When the show's creators initially listed Stephen King's "The Stand" as a big influence on "Lost," it seemed a bit of a head-scratcher, but in light of last night's season finale the comparison is finally starting to make sense, and not just because of Jack's crackpot H-bomb scheme. We thought the dueling puppetmasters were Ben and Widmore, but it turns out that someone else is pulling their strings.

Among all the metaphysical intimations that the series suddenly resumed dishing up last night, the most telling line of dialogue came from a member of yet another new group, the survivors of Ajira Flight 316. Asked "Who are you guys?" by the pilot Frank Lapidus, one man explains, "We're the good guys," echoing one of Ben's better-known claims. "In my experience, the people who go out of their way to tell you they're the good guys are usually the bad guys," Lapidus replies. If only it were that easy to tell.